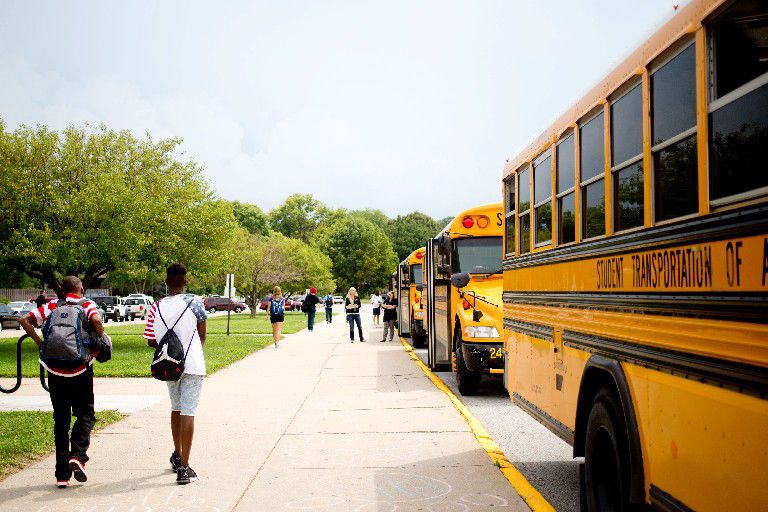 At Burke High School on Friday, some students took buses home, but the south side of the school was lined with cars as drivers waited to pick up students. Busing delays since the start of school Wednesday have stranded students at bus stops and required more parents than usual to drive their kids to and from school. 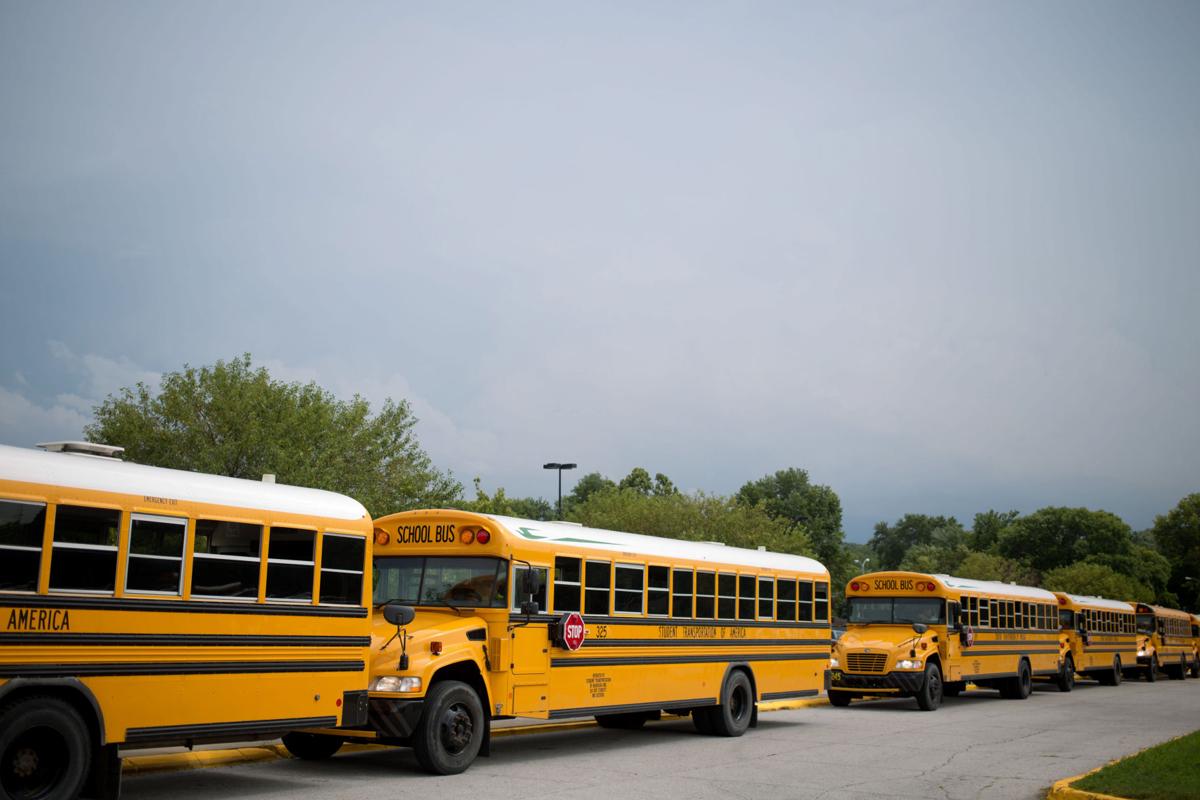 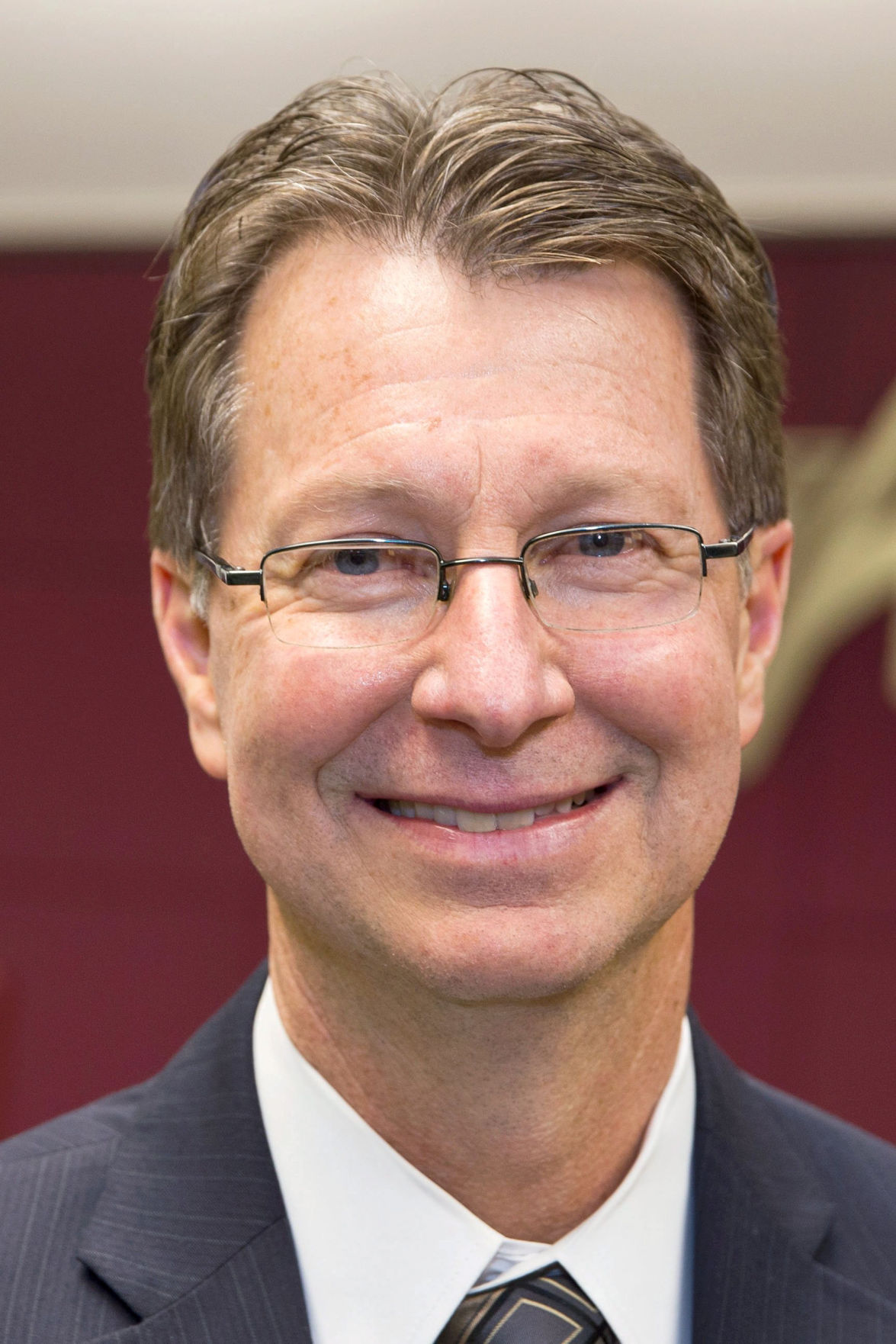 At Burke High School on Friday, some students took buses home, but the south side of the school was lined with cars as drivers waited to pick up students. Busing delays since the start of school Wednesday have stranded students at bus stops and required more parents than usual to drive their kids to and from school.

The Omaha Public Schools are used to working out a few kinks during the first week of school.

Students show up late to get registered. Addresses and bus stops change.

But the busing delays this week have been markedly worse than usual, officials said Friday, stranding kids at bus stops and requiring parents to pitch in on drop-off duty.

OPS leaders huddled Friday and said they’d work through the weekend to figure out solutions to the delays that have plagued the district since school started Wednesday.

“We expected a few glitches, maybe, because it’s the start of the school year, but we did not expect to have this level,” Evans said. “We’re paying (Student Transportation of America) a lot of money, and we expect better service for it.”

In a statement, Student Transportation of America spokeswoman Lynette Viviani said the company was “working around the clock with OPS and other officials to rectify this situation” and asked for patience.

Viviani pointed to a nationwide bus driver shortage and said it’s been especially difficult filling jobs in Omaha. A new regulatory requirement also has lengthened the time it takes for bus drivers to get certified after being trained, she said.

“We do have a full pipeline of potential drivers currently in training and awaiting testing,” the statement read. “We certainly welcome additional folks from the community who would like to join our family of operations.”

Evans said in past years that there have been some driver shortages. At the beginning of August, Student Transportation of America didn’t indicate any major problems.

But on Monday night — school started Wednesday — Student Transportation of America revealed it was down a significant number of drivers, Evans said. Some drivers who had agreed to work earlier in the year may not have shown up, OPS officials said.

As of Thursday, there was a reported shortage of 65 drivers, leaving some routes unassigned. Other buses showed up late to bus stops and schools. In past years, driver shortages at the start of the school year may have totaled 30, OPS officials said.

“Clearly, we wish we would have found out before this week,” Evans said.

Friday afternoon at Burke High School, the south side of the school was lined with parked cars as drivers waited on Burke Street to pick up students.

Many said picking up their children was what they normally do, but Rusha Chappell said her kids rely on the bus to get them from their home in north Omaha to Burke High, a distance of about 8 miles.

Chappell does not have a car. So she had to borrow a friend’s Buick LaCrosse to ferry her 16-year-old twins to and from Burke.

She was frustrated at the situation Friday afternoon. “I have to borrow this car. I have to put gas in this car.”

Thursday morning, the school bus never came for her kids. “My kids were at the bus stop for two hours,” she said. “I told them to come home.”

A son who goes to Lewis & Clark Middle School has experienced no bus issues, she said.

OPS has a number of plans in the works to fill in the gaps.

Starting on Monday, Chief Transportation Inc. will cover 10 general education routes. OPS in-house bus drivers, who transport special education students, have been tapped to fill in for buses that are late or routes that don’t have an assigned driver. On Thursday, those drivers helped Student Transportation of America cover 38 routes.

OPS transportation staff also will try to combine routes to pack more kids onto buses. Middle and high school kids could ride together if their schools are in close proximity, such as Bryan High and Bryan Middle or Benson High and Monroe Middle.

Student pickup times could be altered to give drivers more time to complete their routes. On smaller routes with fewer kids, OPS is exploring contracting with local transportation companies to shuttle students in smaller vehicles, such as passenger vans.

He said Student Transportation of America was exploring other alternatives to fill in gaps, such as bringing in out-of-state drivers.

OPS has relayed its concerns to Patrick Vaughn, chief operating officer of Student Transportation of America, and asked that he or another company executive attend the school board’s meeting Sept. 7 to address the recent troubles.

“At this point, I just want to get the facts and make sure that we make appropriate decisions going forward and that we communicate well with families,” said school board President Lou Ann Goding.

District attorneys also will review the Student Transportation of America contract to determine OPS’s options and the company’s responsibility to pick up the tab for any extra busing costs, Evans said.

“If we’re incurring costs to transport kids we thought they were going to transport, we certainly think they have a responsibility there,” he said.

OPS is not alone in experiencing a scarcity of bus drivers. School districts from Pittsburgh to Kansas to Michigan have reported driver shortages this year, driven in part by the recovering economy, the part-time hours and the sometimes-stressful nature of the job. Transportation officials say state and federal screening and training requirements also can shrink the pool of qualified candidates.

Some districts have boosted pay and hours or offered signing bonuses to attract drivers.

School board member Marque Snow said the district needs to let parents know how long these problems might persist.

The district has been sending emails and robocalls out to parents warning of delays since Tuesday night.

“At the end of the day, (transportation) is a pretty big budget, and we can’t sit there and point the finger at everybody else,” Snow said. “It’s our job to make sure those kids get picked up.”

About one-third of OPS’s 52,000 students — or more than 17,000 — take a bus to school. The district has not been able to count exactly how many students have been affected by delays, but OPS spokeswoman Monique Farmer said about half of OPS schools, all across the city, have been affected.

Teachers and principals are trying to work around students who are showing up late or kept waiting after school for a bus, Evans said.

The Millard Public Schools also contract with Student Transportation of America, but the start of the school year has been fairly smooth so far, said spokeswoman Rebecca Kleeman. Millard is about half the size of OPS, however, and only about 3,000 of its 23,000 students get transportation to school.

OPS shortened its middle school walk zone this year, making more students eligible for a bus ride. But that added only 19 routes to the more than 700 that already exist, officials said, which shouldn’t have contributed to the delays.

Driver shortages don’t matter to 5-year-olds waiting for their first bus to school.

OPS’s in-house transportation staff members, who also cover special education busing, were filling in on some routes, and Farmer said the district was considering bringing in another busing contractor to get more drivers on the road.