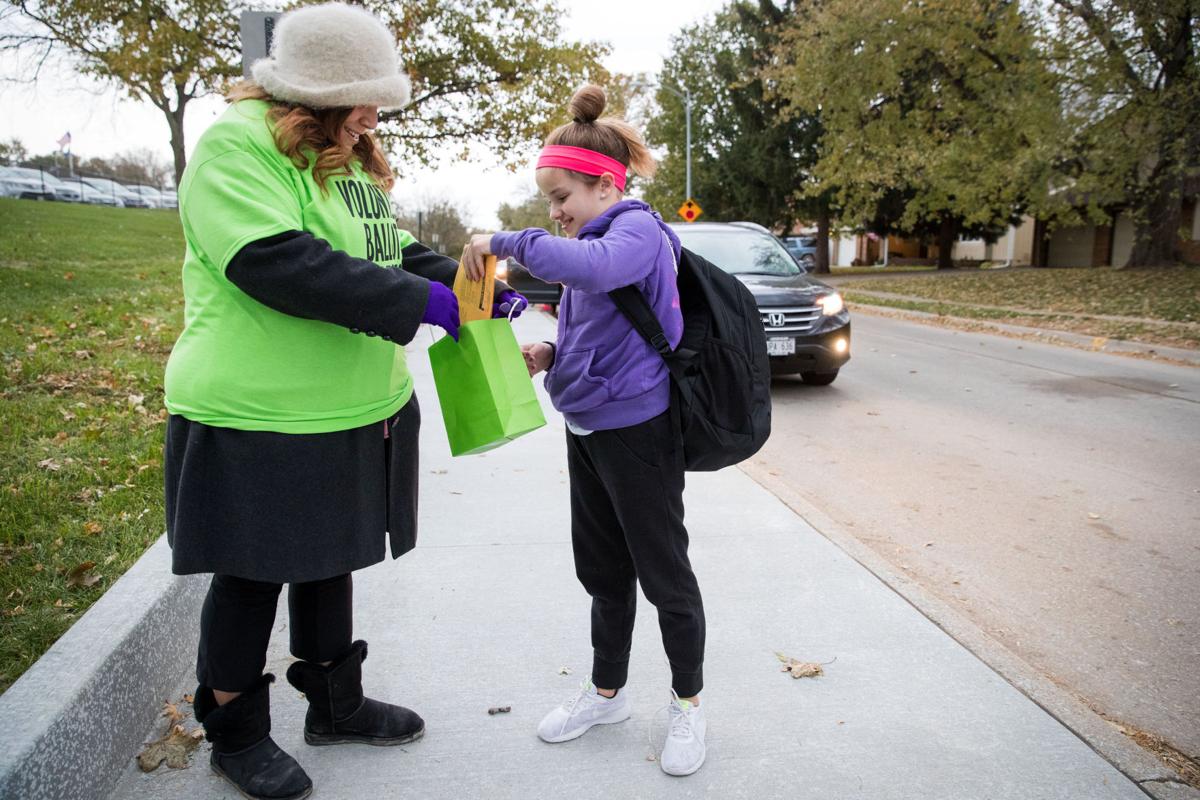 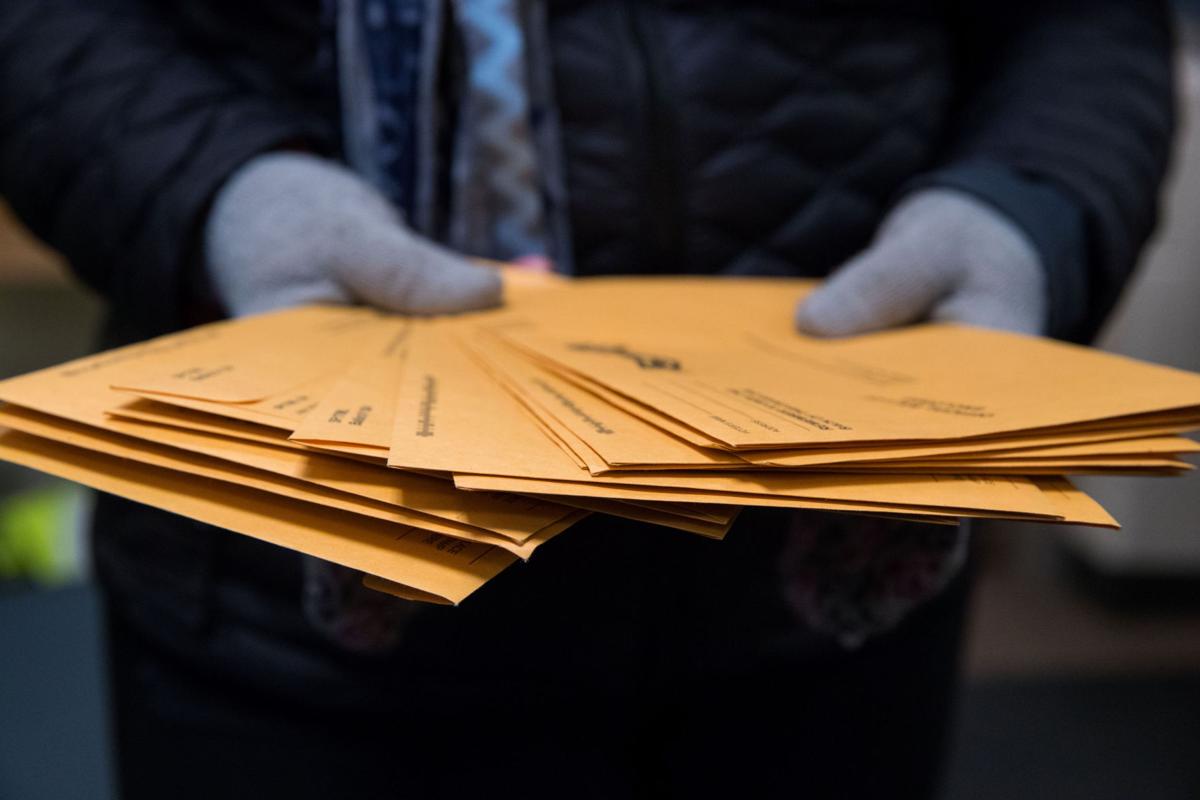 Michelle Hankins took up her post on the sidewalk outside Montclair Elementary School on Wednesday, and within minutes she received her first delivery.

A woman in a Chevy sport utility vehicle pulled to the curb and handed over a sealed brown envelope containing a ballot in the Millard Public Schools’ levy-override election.

A few minutes later a boy walked up with another one.

Hankins is not an election office employee, just a mom who agreed to serve as a volunteer vote collector.

She is one of dozens who have been stationed outside Millard schools for the mail-in election that got underway Oct. 23.

Organizers say the effort is aimed at boosting turnout. They say they collect and turn in anyone’s ballot, whether the person is for or against the override. The effort, they say, is a matter of convenience, especially in an age when people are less likely to have stamps around the house.

Ballot collection by third parties is legal in Nebraska, according to a state election official and the election commissioners in Douglas and Sarpy Counties. But the practice, which is restricted and even outlawed in some states, is concerning to a state lawmaker.

Some states have restricted vote collection by third parties, describing it as “ballot harvesting,” citing worry about potential fraud and a desire to secure the chain of custody of the ballots. However, some of those laws have been challenged as voter suppression.

The Millard effort, organized by a pro-override group, has prompted calls to the Douglas County Election Commission questioning its legality.

“The statutes are silent to it,” said Valerie Stoj, spokeswoman for the commission, “so there aren’t any guidelines or restrictions on it.”

“Currently, any voter has the right to give their ballot to someone they trust, to be delivered to the election office,” she said.

Wayne Bena, deputy Nebraska secretary of state in charge of elections, said he’s not aware of other instances of vote collectors being used in Nebraska, though there could have been some.

He said he’s had inquiries from parties interested in doing it. He said he tells them it’s legal, but to consider the perception.

During primaries and general elections, schools often serve as polling places, making them off-limits to politicking. Nebraska law prohibits electioneering within 200 feet of a polling place.

But the Millard override election is being conducted by mail. There are no polling places. Voters received their blank ballots in the mail and must return them completed by 5 p.m. Nov. 14.

Voters can mail the marked ballots back to the election commission — postage costs 49 cents. Or they can hand-deliver their ballots to their county’s election office or one of 10 official drop boxes in Douglas County and one in Sarpy County.

The volunteer ballot collectors offer a new but controversial option.

“We are doing it to increase civic engagement, to get the pulse of the community,” said Stacy Jolley, co-chair of the pro-override group Millard Citizens for Continued Excellence. “We, of course, have no idea how people are voting when they hand us their ballot.”

There are no district resources used, she said. Group members post signs outside schools that say “volunteer ballot collection tomorrow” and then wear neon-green T-shirts identifying themselves as volunteers.

Those make it “extremely clear” they are volunteers, she said.

And, she said, they don’t try to sway voters who are dropping off ballots.

“So, for example, there aren’t ‘Vote Yes for MPS’ signs where we’re doing these collections. We’re not advocating for the levy when we’re collecting ballots.”

It’s no different, Jolley said, from offering to deliver a ballot for a neighbor.

However, because the collection sites are set up outside schools, the majority of votes collected will be from parents, who might be inclined to favor the override.

District officials have said that if voters don’t approve the extra 9-cent property tax levy authority for the school board, budget cuts are likely and would be deep, cutting into academic programs that officials say make Millard a standout district.

The collectors are not staking out supermarkets, shopping malls, libraries or other public places.

“People could stand out in front of those spaces, too,” Jolley said. “It is hard to find enough volunteers to cover all the schools.”

State Sen. Lou Ann Linehan, who represents part of the Millard district, said she’s concerned about the vote collection effort and has “no doubt” that there will be legislation introduced to address it.

Linehan said she finds the use of vote collectors outside schools “very disturbing.”

“Now, again, they’re not breaking any laws,” she said, “but just because it’s not illegal doesn’t make it right.”

At least 14 states have statutory limits on the collection and delivery of absentee or mail-in ballots by someone other than the voter, according to a 2016 report by the National Conference of State Legislatures.

States typically restrict ballot collection two ways. They limit who may collect ballots to family members, caregivers, election officials or specifically designated people. Or they limit the number of ballots a person can collect, which prevents mass gathering by political parties or interest groups.

In Arizona, lawmakers passed a law prohibiting the collection of voted or unvoted early ballots from another person. The law is being challenged in court.

Next year, Montana voters will consider a ballot referendum to prohibit collecting someone else’s ballot.

Like most school districts, Millard has a policy addressing the use of school property for political purposes.

District spokeswoman Rebecca Kleeman said the policy does not address a “civic engagement” effort and said nothing in the policy prevents a parent group from launching a vote-collection effort.

“This is not a violation of our school board policy,” she said.

Millard’s policy prevents the distribution of literature or other materials relating to candidates or ballot issues on district property when school is in session, defined as one hour before the start of school and 30 minutes after.

It prohibits the use of district communication systems, including email, to distribute political materials.

The policy states that school-related organizations that use school facilities “shall not use school property when promoting partisan politics or individual candidates for public office or holders of public office.”

Jolley, however, said school drop-off lines move quickly, the volunteers don’t engage parents in conversation, and the “lion’s share” of cars drive on by without a ballot.

Hankins, whose son is on the student council, said she just responded to an email seeking volunteers.

Wednesday was her first time out. Wearing the volunteer shirt over her parka, she positioned herself on the sidewalk along South 138th Street, where parents drive up to drop off kids for school.

During her half-hour shift she collected about a dozen ballots, including one from Biagio Arobba, a dad with two children at Montclair.

Arobba said the ballot materials he received from the election commission listed various official drop boxes, but he couldn’t get to them and decided to give his to the collector.

He said it was convenient. He supports the override.

“We need to be spending more money educating instead of tax breaks for the wealthy or wars,” he said.

Election officials say voters should give ballots only to someone they trust.

They also note that mail-in voters can check online to verify that the election office received their ballots.

If residents are concerned whether a vote collector is legitimate, they shouldn’t hand over their ballots, an election official says.

“The voter has the power,” said Valerie Stoj, spokeswoman for the Douglas County Election Commission.

A person also can go online and verify that the commission received the mail-in ballot and whether it was accepted or rejected.

The website for checking can be accessed through either the Douglas or Sarpy election commission websites.

In Douglas, go to www.votedouglascounty.com and, under Quick Links, click By-Mail Ballot Status. Choose your county and election, and enter your name, date of birth and other information, and you can find out if your ballot was received. You also can find out if your vote was valid — if not, you should contact the election commission to find out what went wrong.

One common problem that arises is an envelope not being signed by the voter, Stoj said.

She said it typically takes one business day for the commission to receive and scan the ballot, and enter the information into the website.

As Millard tax levy override vote nears, supporters have tax watchdog on their side; foes call for more belt-tightening

Millard officials have pitched the 9-cent tax levy override as an essential “insurance policy” to avoiding program cuts and class-size increases brought on by what they say is sluggish growth in property values and state aid.