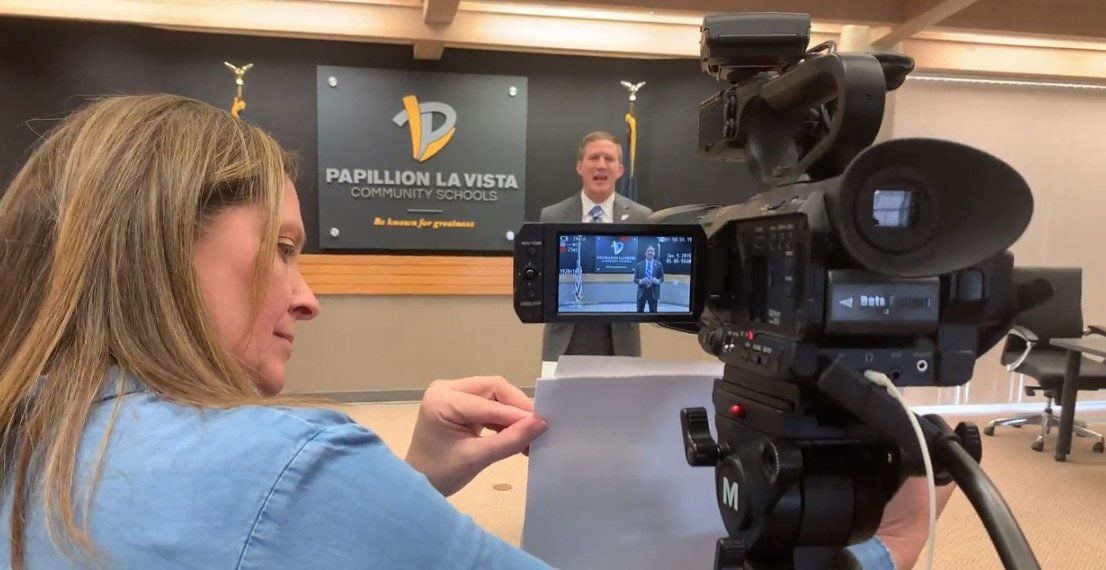 Hey you with the air horn, let her rip.

You won’t bother anyone, except maybe the dog.

The first virtual high school graduations for Omaha-area public schools — ever — are set for Sunday.

The ceremonies for graduates of Papillion-La Vista’s two high schools will feature cameos by notable alumni and personalities; a socially distanced choir performance that students recorded remotely; and a clever, but for now secret, twist on the traditional tossing of the mortar boards.

Although it may seem counterintuitive, the ceremonies produced by district personnel could wind up being more intimate and emotional than the big arena ceremonies of normal times.

Not only are they taking place in the shadow of the continuing COVID-19 pandemic, but the ceremonies for the two schools will be packed with personal touches not normally found in a typical graduation ceremony.

“There is no doubt in my mind it’s going to be more emotional,” said Megan Davey, a Papillion-La Vista High senior selected as one of the graduation speakers.

All the seniors have experienced the same loss, she said. They watched in disappointment as the coronavirus cut short their final year, spoiled their spring sports and activities and torpedoed a conventional graduation — at least for now. District officials have scheduled in-person ceremonies for August at the Ralston Arena — fingers crossed.

“We all kind of share that pain together,” Davey said.

But this year’s odd situation has its perks, she said. In a normal graduation, the seniors would sit in rows alphabetically on the arena floor, and might not even know the classmates seated beside them, she said.

In this case, district officials are encouraging graduates and family members to hold watch parties in their homes — as long as they limit the attendees to adhere to health guidelines. Davey said she will be watching the ceremony with family at her best friend’s house.

“It’s probably going to be louder in the house than it would be in an arena,” she said.

The term “virtual” is a bit of a stretch to describe the prerecorded graduation ceremonies. A better description might be “all digital.”

There won’t be a giant Zoom session with all the students teleconferencing in. There won’t be any live interaction, except what occurs on social media as the graduation video rolls on Facebook Live and YouTube. Davey expects that students will be furiously texting one another during the ceremony.

The material in the videos had to be produced and assembled while observing social distancing guidelines imposed because of the pandemic.

The ceremonies will combine videos, photos, drone shots and of course the requisite recitation of the names of the freshly minted graduates as their portraits flash across the screen. Papillion-La Vista High School has 506 graduates; Papillion-La Vista South High has 478.

Distancing restrictions were a big hurdle for the choir at Papillion-La Vista South.

Choirs, by definition, are a gathering. If the choir were to perform, music teachers had to get around that. Their solution was to have selected choir members record parts of a song remotely, and then stitch them together as a virtual choir.

Even though the whole choir couldn’t perform, the result of this ingenuity is a remarkably seamless performance. The choir members appear in boxes on the screen, a format that most everyone has seen and used for teleconferencing during the pandemic.

Each ceremony will feature a student singing the national anthem. That segment was recorded amid the flags and monuments at Veterans Park in Papillion.

Metro-area school buildings closed in mid-March, upon the recommendation of state officials, in an effort to blunt the spread of the virus. There had initially been hope of reopening this spring. But Gov. Pete Ricketts subsequently issued a directed health measure requiring all public, private and parochial schools to operate without students through May 31. The order canceled all extracurricular activities, as well. It limited public gatherings to 10 people.

Many districts rescheduled live graduations for late summer in hopes that the restrictions will be eased by then. In the meantime, they’re honoring grads with a digital substitute.

Instead, they went with prerecorded.

Officials searched high and low for candid photos and videos of seniors to use, Eyman said.

Davey recorded her speech inside the empty high school, a poignant detail that will add drama to the ceremony. Students have only been allowed inside the school to retrieve items from their lockers.

During her speech, she walks the hall, visiting familiar places, like the classroom where she took Advanced Placement literature.

Going back was sad, she said, but “a good way to say goodbye.”

Some students are still sad about missing out on traditional graduation, but others accept it and are excited for the virtual one, she said. Her speech is punctuated with drone video of the school and other video clips of students in the halls and at football games.

One of her points of emphasis: “This does not make our years together any less special.”

Ryleigh Parrack, who is graduating from Papillion-La Vista South, recorded her speech inside her empty school, too.

Her family will be eating tacos — her choice — while gathering with her to watch the ceremony.

Parrack said students appreciate how the community has responded to make things special, with such events as the stadium lighting, virtual honors night and a fireworks show. She said she’s excited to watch the virtual graduation.

“It’s different and not what we expected, but it’s kind of more special,” she said.

For school board President Bret Brasfield, the switch to virtual means that he will miss out on a special moment. His daughter, Emily, will graduate from Papillion-La Vista South.

He was looking forward to handing Emily her diploma onstage — and giving her a hug.

Now the family will be at home watching the ceremony on his smart TV.

“We are at the mercy of this disease,” he said.

Despite all the hardship caused by COVID-19, he said, there’s something unique and historic about a class of young people from the Information Age holding a virtual graduation.

Such an event would have been hard to pull off even a decade ago, he said.

“We would not have had a whiff of the bandwidth to do this,” Brasfield said.

Students in some districts should be able to open as planned in August, the state education commissioner says. But the pandemic might force others to attend through digital and remote classes.