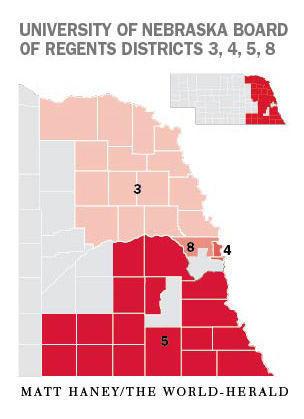 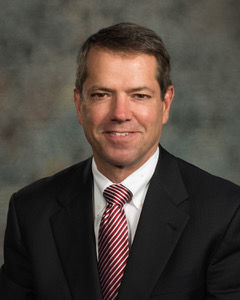 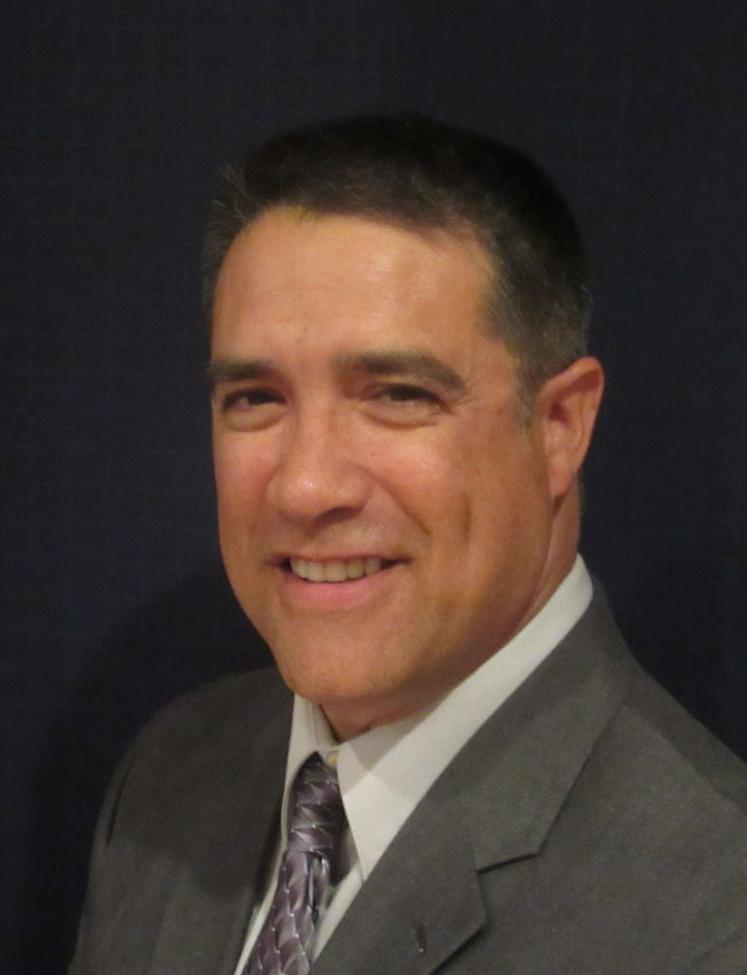 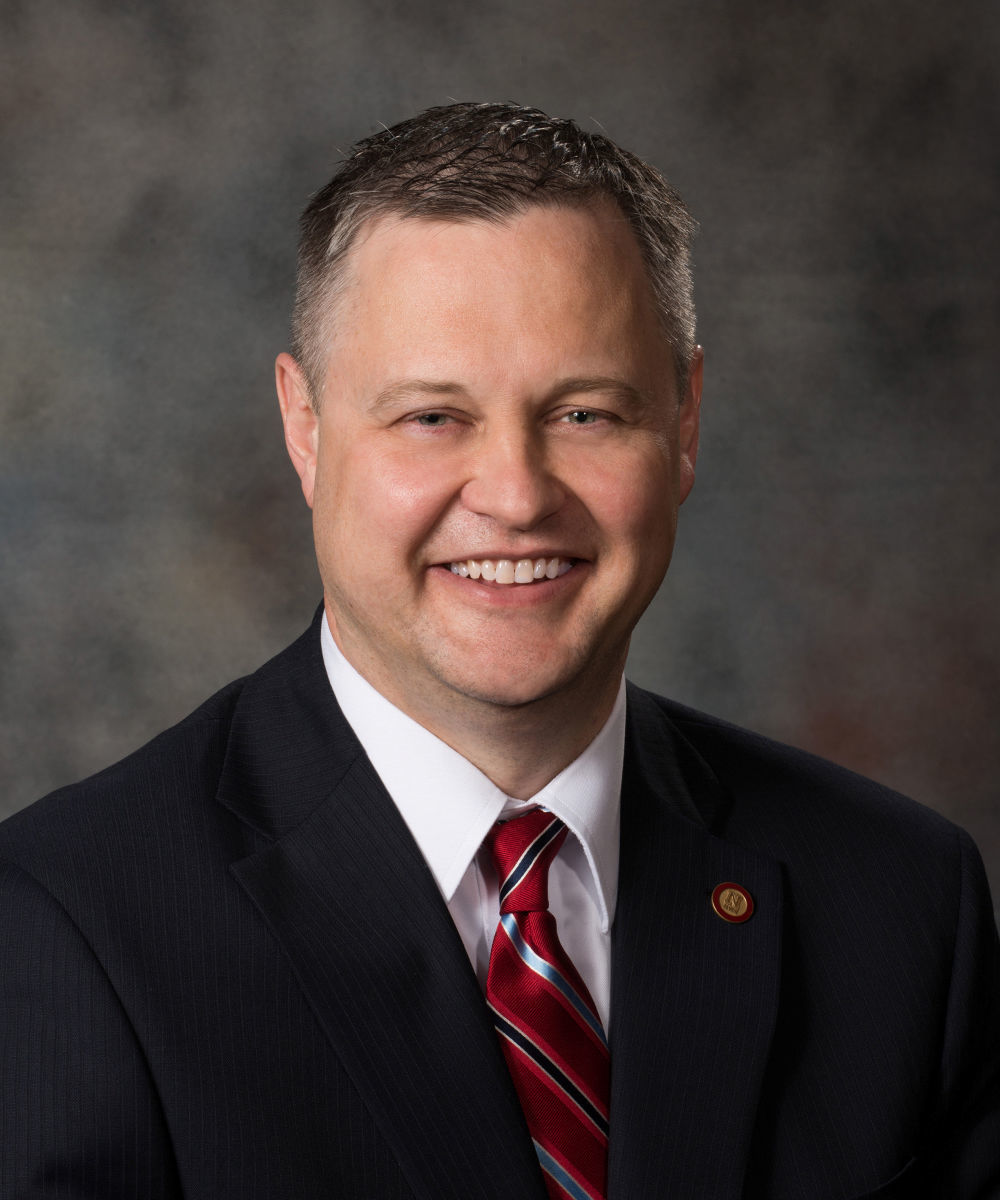 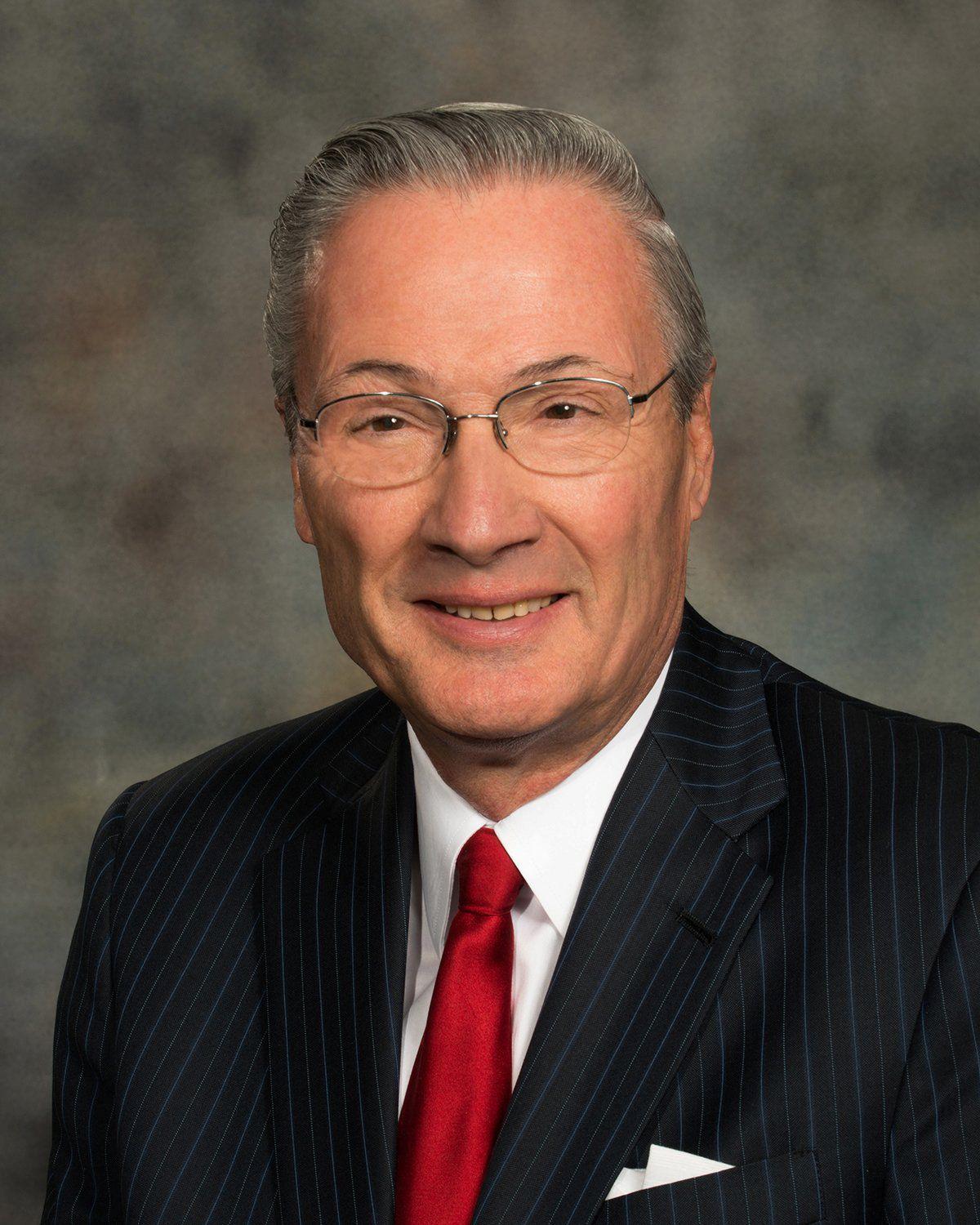 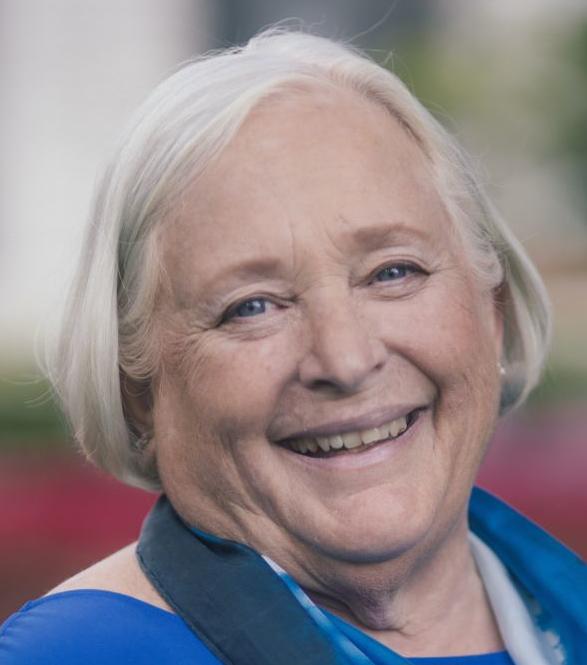 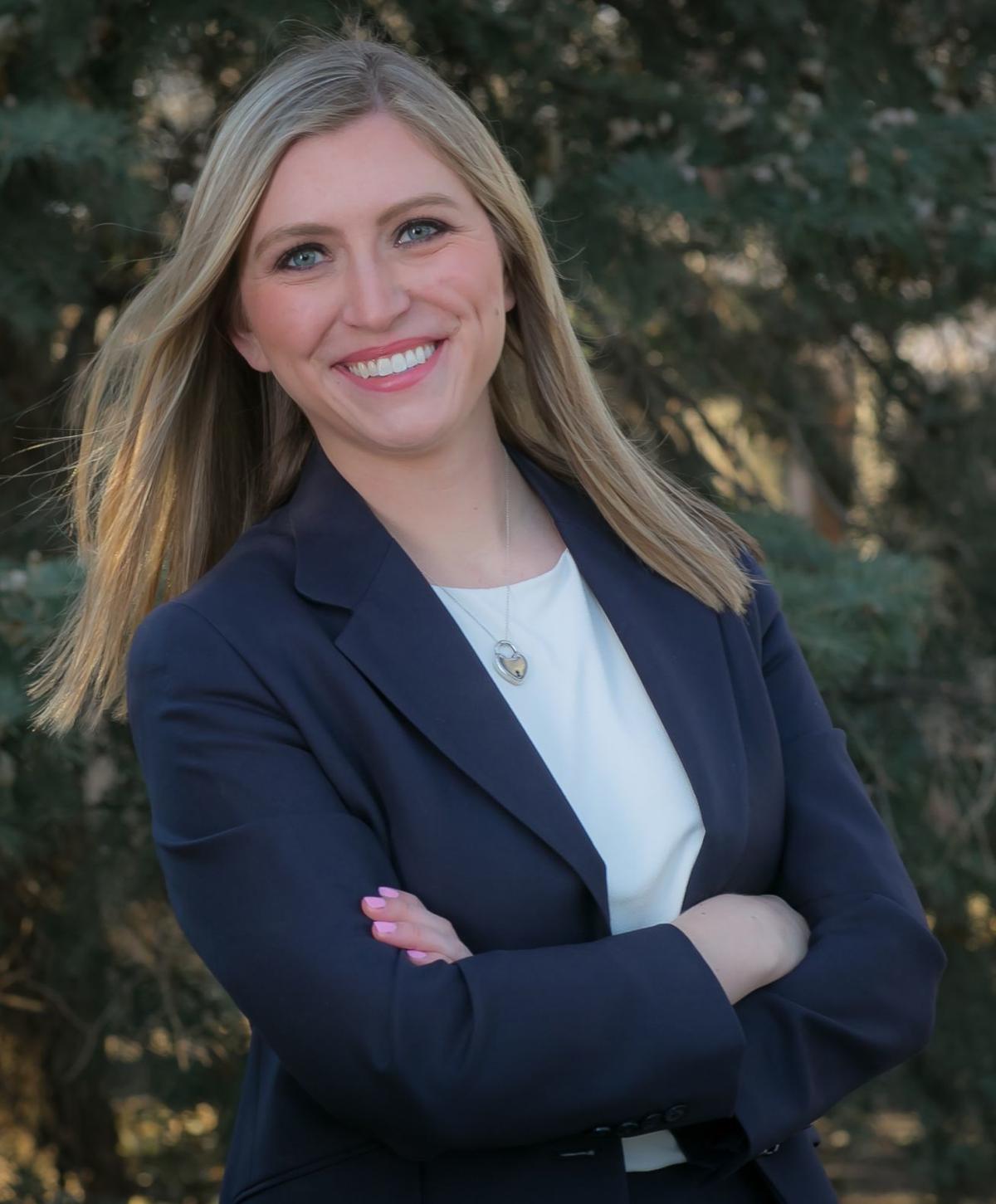 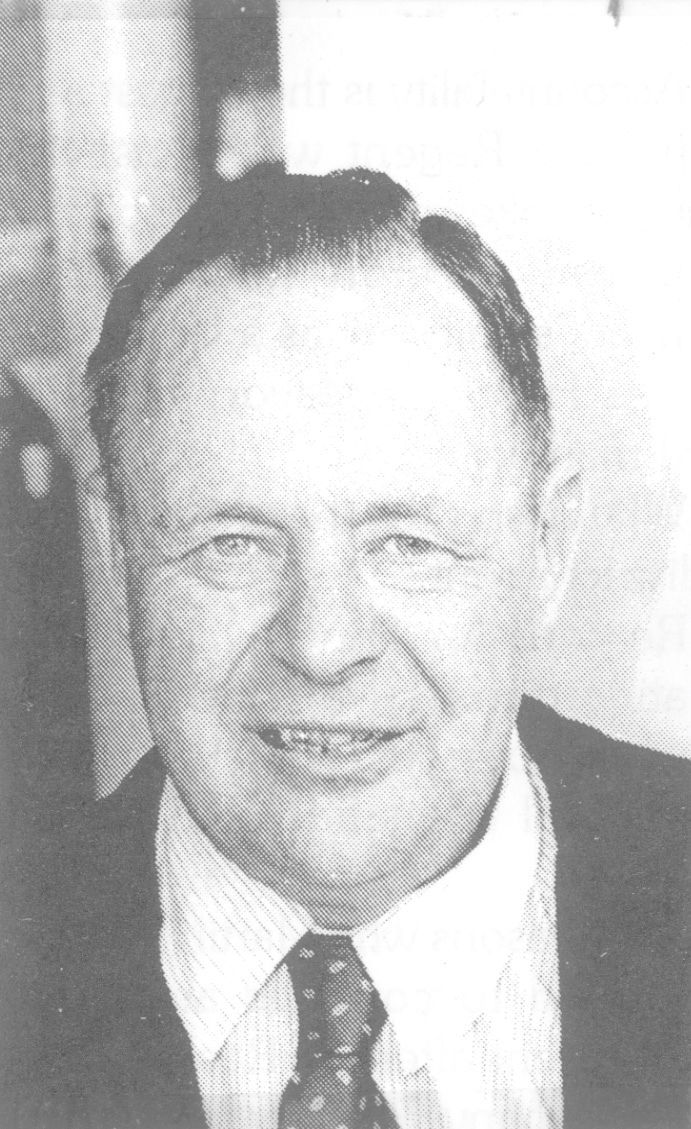 Nebraska is one of the few states in which the public elects its university board of regents, and three of eight seats on the board are being contested in November.

Only four states publicly elect the boards of their major universities. In most states, the governor or legislature appoint university board members.

The regents oversee campuses in Omaha, Lincoln, Kearney and Curtis.

In Nebraska, seats in four districts are on the ballot, but Regent Jim Pillen of Columbus has no opposition in northeast Nebraska’s District 3.

Barbara Weitz edged Regent Hal Daub in the primary election in May, making this race the one to watch on the Board of Regents.

Weitz expressed disappointment over the NU system’s modest state funding requests of 3 percent and 3.7 percent increases for 2019-21. Typically, those requests are about 6 percent.

“I think we are settling for less, and I think we have to fight harder for more state money,” said Weitz, a 70-year-old retired social work faculty member at the University of Nebraska at Omaha. NU must “stake a claim for more money, not less,” she said. “And I know it’s a hard fight.”

The state has made two midyear trims in the NU system’s allocation. And this year’s allocation is less than the state money NU received in 2016-17.

The AAUP censure came in large part, the organization said, because UNL failed to give lecturer Courtney Lawton a hearing before a faculty committee before terminating her at the end of the year. Lawton had brought national attention to UNL a year ago, when she berated a student who was recruiting for the conservative group Turning Point USA.

The AAUP said the university also crumbled under the criticism of some conservative senators.

Weitz said she wonders if the regents understand the consequences of an AAUP censure. It’s harder to recruit great professors when a school is on that list, she said.

He said Gov. Pete Ricketts and the Nebraska Legislature have done good work considering that they have stagnant or declining revenues to distribute.

Daub, 77, said the regents did well to keep the NU tuition increase at 3.2 percent. The regents also have explained a difficult budgetary environment to the public and lawmakers, he said. This group of regents works well together, he said.

As for the AAUP censure, Daub said administrators used common sense and “made the right decisions.”

The censure “will have little if any bearing on the quality of education” and recruitment of strong faculty and students, he said.

Elizabeth O’Connor said NU needs to “tell its story a little bit more clearly” to gain the state allocations it desires. NU routinely points out its role in economic development in Nebraska, but O’Connor said that must be refined.

“We need to figure out what the state needs and how we get there and what our role in that is,” she said.

O’Connor, a 27-year-old attorney, said she believed that the incident involving Lawton and the conservative student was “more of a bullying issue.”

She agreed with the AAUP, saying discipline of Lawton should have been referred to a faculty-student panel.

O’Connor received about 72 percent of the vote in the two-person primary against Larry Bradley. They will meet again in the general election.

Bradley has declined to debate O’Connor, just as Weitz has chosen not to debate Daub. Bradley, a 54-year-old adjunct professor at UNO, said O’Connor is a trial attorney who is accustomed to debate.

“We’re actually educators,” Bradley said of himself and Weitz. The League of Women Voters’ forum “was not conducive for educators.”

He said NU’s state money problems could be remedied in part by tapping into the NU Foundation, which had total assets in 2016-17 of $2.3 billion. Although almost all of that money is directed toward specific projects, Bradley said some philanthropists would go along with helping fund general operations at NU.

Bradley referred to the University of Nebraska at Kearney’s elimination of baseball, men’s tennis and men’s golf as a sad situation driven by budget problems. The regents, he said, should have put those items on the agenda so they would have faced players, students, parents and fans.

He also said the university “panicked” when it didn’t give Lawton a hearing before a faculty committee. “Dr. Larry Bradley,” he said, referring to himself, “would be a person to try and bring both sides together.”

Rob Schafer of Beatrice is currently chairman of the board. Schafer said the administration and board “did a tremendous job” by changing a governor-recommended 4 percent cut in state funds to a legislative cut of 1 percent. “I think that was huge,” the attorney said.

As for the Lawton incident and the censure, he said, “You’re not going to leave everyone happy.” He called it “a personnel matter.”

Prokop, 83, served on the board for two terms more than 35 years ago and has been beaten out in attempts to get back on. He said he has been in and out of hospitals fighting an ulceration on his foot and has struggled to campaign and stay abreast of issues. He said lobbyists typically carry the ball for organizations seeking state money.

As for the AAUP censure, he said due process, or fair treatment of an individual, is a constitutional right. Without mentioning Lawton, he indicated that she deserved a committee hearing at UNL.

“Would you want someone to come down on you and make a ruling against you without due process?”

What is your top priority? The reason I filed for another six years on the Board of Regents is that I can make a difference. I feel like we’re working for the future generations of Nebraska. NU leadership needs consistent support. I hope we can continue to develop the One Nebraska vision, that we all work together and become collaborative. Education in all forms has to stay accessible. I believe agricultural research needs to become more relevant and is more impactful. We need to do a better job of strategic thinking at NU. There’s going to be a lot of challenges in higher education in the coming years. I look forward to being a part of the team that solves our challenges.

What is your top priority? As a current elected official on the Papio-Missouri NRD, I have been on the finance committee for six years. I have studied, witnessed and voted on audits and budgets. I have held the line for the taxpayers of Nebraska. I am not going into the regent race green behind the ears with respect to the university’s budget of $2.6 billion.

What is your top priority? That the university offers high-quality education to the next generation of Nebraskans and continues to be an engine for economic development. We can achieve that goal by ensuring that our university is fairly funded, spends prudently, and invests wisely in Nebraska’s future.

What is your top priority? Affordability and transparency. That’s where I’m coming from. Those are the two major issues during this campaign.

What is your top priority? My top priority as a regent is to continue efforts to make the University of Nebraska affordable and accessible to working families across Nebraska. As a first-generation college graduate and someone that came from a working-class background, I have experienced firsthand the transformative power that an education can bring in improving a person’s life and improving society as a whole by creating responsible and active citizens. My goal as a regent is to help others achieve their goals — whatever they may be — by promoting access to a world class education at an affordable price.

What is your top priority? Much of my business and professional career has been spent in civic engagement, working for Nebraskans and our state; as congressman, then mayor of Omaha and the past six years as regent. The young people educated through our university system are crucial to the future of this state and our nation. My goals are to have an affordable tuition structure, keep our well-prepared graduates in Nebraska, and do so with the least financial burden to families and students. My background in both business and public service is demonstrated conservative leadership with fiscal management experience and achieving positive results.

What is your top priority? I am running for the Board of Regents as an educator, not a politician. I have dedicated decades of my life to service within the university. I have 30 years of experience working within the NU system as an alumna, faculty member in the UNO School of Social Work, board member of the University of Nebraska Foundation, and volunteer. As regent, I will increase the diversity of perspectives on the board, find innovative solutions to budget cuts, and encourage greater collaboration and communication within the board and with taxpayers. We must maintain affordable and accessible higher education for all Nebraskans.

UNL now will go on the American Association of University Professors' censure list of about 55 colleges and universities.