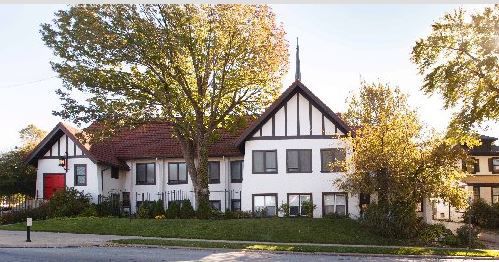 A newish private high school in midtown is opening its doors to the public Thursday.

St. Barnabas Classical Academy is holding an open house, art show and staging of “A Christmas Carol.” Tickets are $10 apiece or $20 for a family. The event runs from 7 p.m. and lasts about two hours.

The school occupies the southeast corner of 40th and Davenport Streets inside the formerly Episcopal, then formerly Anglican St. Barnabas. The parish joined the Catholic Church in 2013.

While it sits inside the Omaha Archdiocese, it is governed by a diocese-like entity in Houston called the Ordinariate of the Chair of St. Peter that is governing other similar Anglican parishes that have joined the Catholic Church.

The school serves 18 students in grades nine through 12 with an educational model that stresses the classics, like Latin, and humanities, like philosophy. It also requires daily Mass, and its theological focus is more conservative or, as the dean of students, Jesse Nigro, puts it, traditional. He said the descriptions might sound gloomy but “we’re having a good time. These are happy kids.”

The school began five years ago under a different classical model. It has been formally affiliated with the parish for the past two years.

The parish has bought property in the area that includes a pair of brick duplexes that are rented out. St. Barnabas also owns the Cornerstone Mansion, which is used as a rectory.

“We’re the new kids on the block,” Nigro said. “A lot of people are trying to figure out who and what we are.”

Grace: Dundee Bank gives away cash on the street to spread Christmas joy

Employees of the two-branch Omaha bank have hit the streets with envelopes containing two crisp $20 bills and some instructions. Perfect strangers are asked to keep $20 and give away $20 to the person or cause of their choice.