LINCOLN — In one case, police were called over elementary school-age brothers yelling and cursing at each other.

In another, a school employee referred a student for stealing a candy bar from her desk.

A third involved a middle school student caught writing on her desk.

The ACLU of Nebraska cited these and other cases in a new report questioning how school police programs operate in Nebraska. The report, released Thursday, says the programs fuel a “school to prison” pipeline and disproportionately affect students of color and students with disabilities.

“As a result of having a permanent police presence in schools, children are far more likely to be subject to school-based arrests for disciplinary matters than they were a generation ago,” said Rose Godinez, a co-author of the report and a state ACLU legal and policy counsel.

“A school-based arrest is the quickest route from the classroom to the courthouse,” she said.

Russ Uhing, LPS director of student services, said the district is aware of the disparities and has been working to address them. Efforts include diversion programs for students, training for school administrators and school resource officers about when referrals are appropriate and strategies to encourage good behavior and prevent problem behavior in schools.

In Omaha, Police Capt. Russ Horine said additional data would be helpful for understanding the apparent disparities but noted that referral decisions are made by school officials.

“We don’t want to bring students into the system if we can help that,” he said.

“The data presented in this report is shocking but, unfortunately, unsurprising,” said Juliet Summers, policy coordinator at Voices for Children in Nebraska. She said the report suggests that students are losing the chance to be just teenagers with teenage behaviors, and are being turned into suspects or criminals instead. 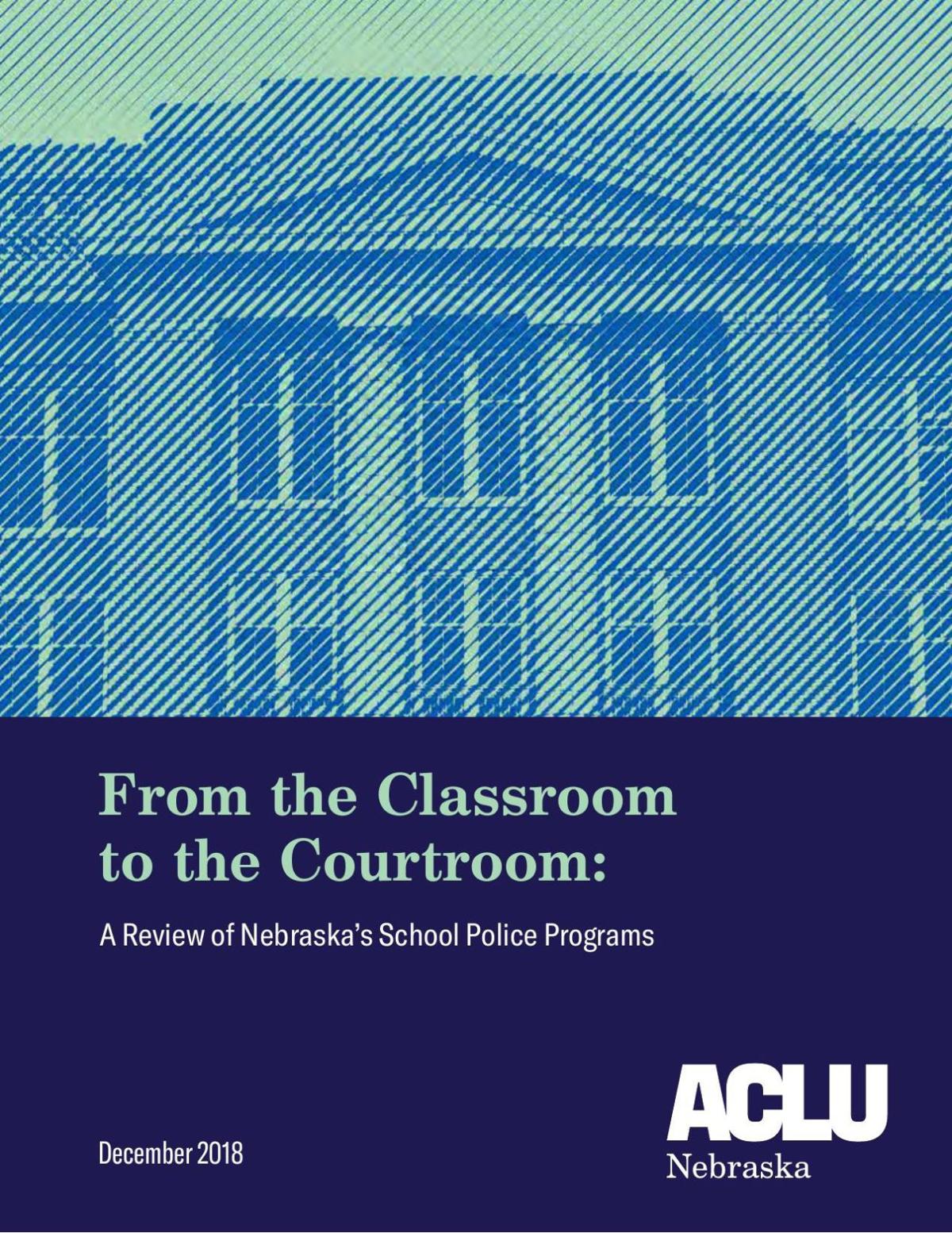 Scout Richters, an ACLU legal and policy counsel and co-author of the report, said the findings are similar to those seen on a national level.

Both nationally and in Nebraska, the use of school resource officers increased during the tough-on-crime years of the 1990s. Many schools added or expanded programs in response to more recent school shootings.

But Danielle Conrad, executive director of the state ACLU, said school police programs can have troubling consequences for students’ civil rights and personal liberty. She called for a better balance of safety and liberty in the programs.

The report called for an end to routine policing of schools, saying police should enter schools only to address public safety threats. It also called for officers to stop arresting students for disciplinary problems, disturbances and other common adolescent behavior. Among other recommendations, the report suggested legislation protecting students’ rights during questioning, strong memorandums of understanding between school districts and law enforcement, more police training on topics such as adolescent development and de-escalating tense situations, better data collection and efforts to inform parents and students about legal rights.

The Douglas County Youth Center stands in sharp contrast to its peers for its heavy use of restrictive confinement, a new report notes.

If you can't do the time, don't do the crime. This is not about candy bars. It is about criminal behavior.

The Leftist, taxpayer-funded A.C.L.U. has decided “As a result of having a permanent police presence in schools, children are far more likely to be subject to school-based arrests for disciplinary matters than they were a generation ago,”. Naturally, law enforcement is the problem.

Such a disturbing trend cannot possibly be attributed to the normalizing of absent/detached/uninvolved/careless/single parent situations and its attendant lack of respect for authority and the law.

It took 40-50 years of social engineering to get here. It will take even longer to get back - if we ever start. 😳

The track to prison does not start with having a police presence in our school. It comes from having a family that is little more than a criminal sub organization....for not knowing who your father is or was...or what prison he might be in now...from having a mother who is on drugs or in prison herself...for living in a neighborhood where the highest aspiration is to be king thug and selling drugs while notching your drive bys. I hate Trump, but the Dems are all wet by trying to foist this fairy tale garbage on a public that knows it's bunk.

Some of these schools don't have a nurse or a counselor, but the can have a cop.

> Some of these schools don't have a nurse
> or a counselor, but the(sic) can have a cop.

No doubt the latter is needed more often than the former.