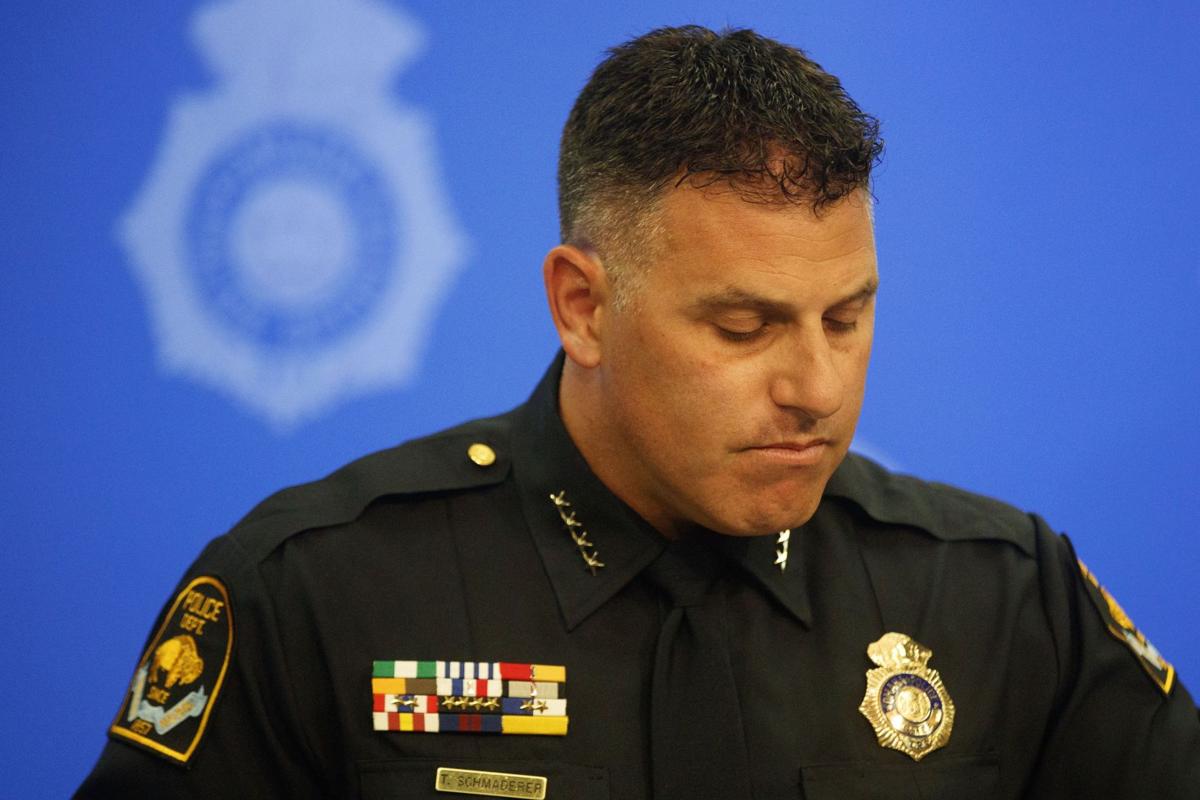 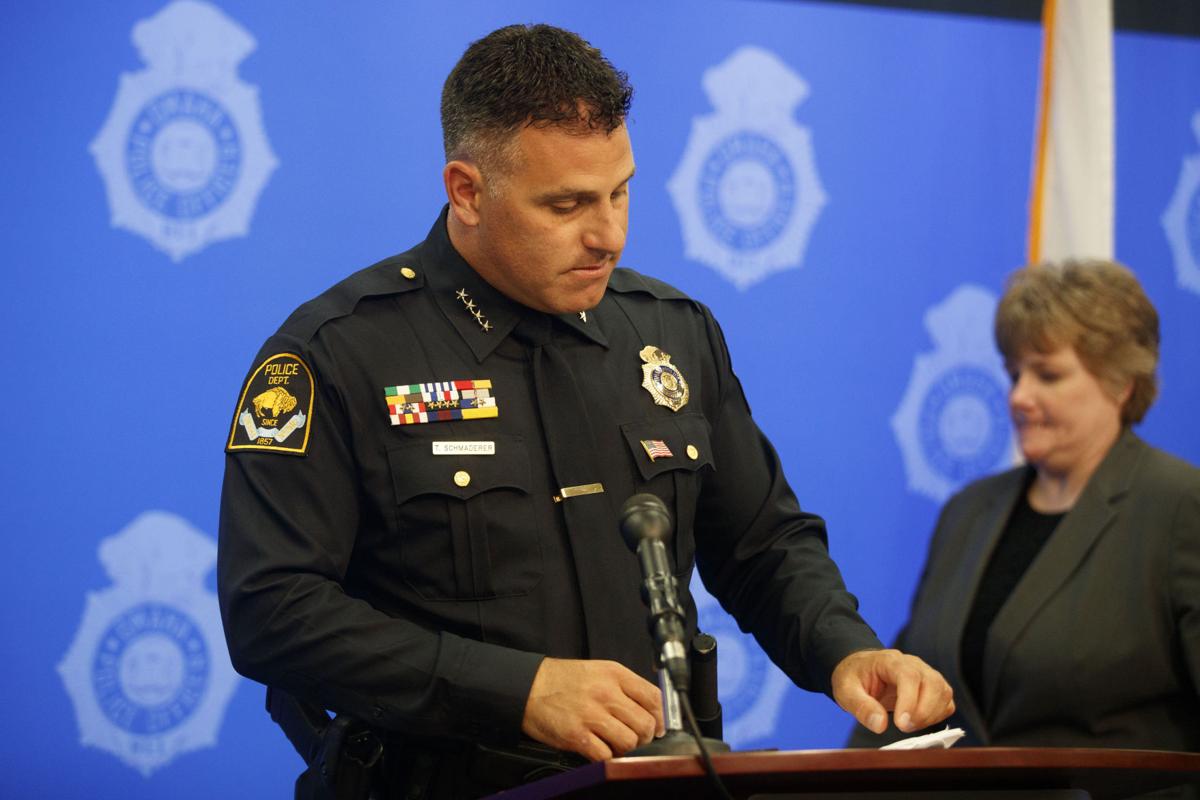 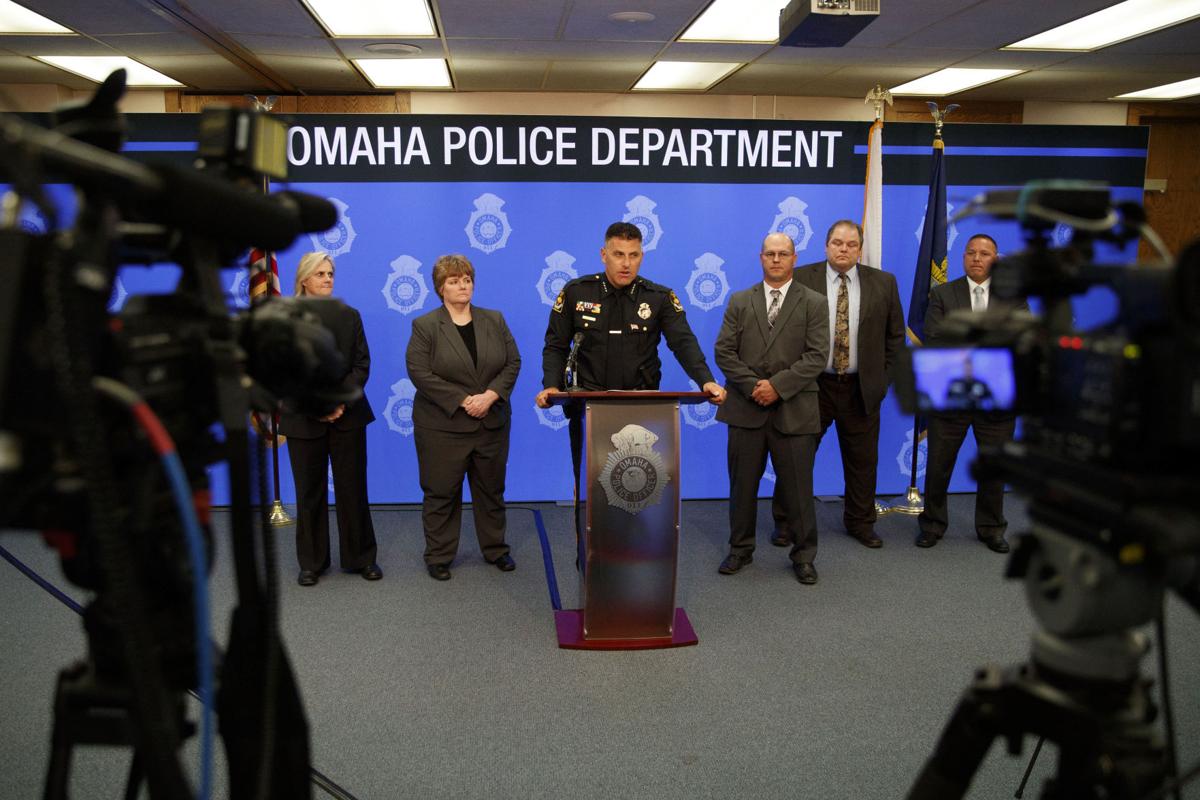 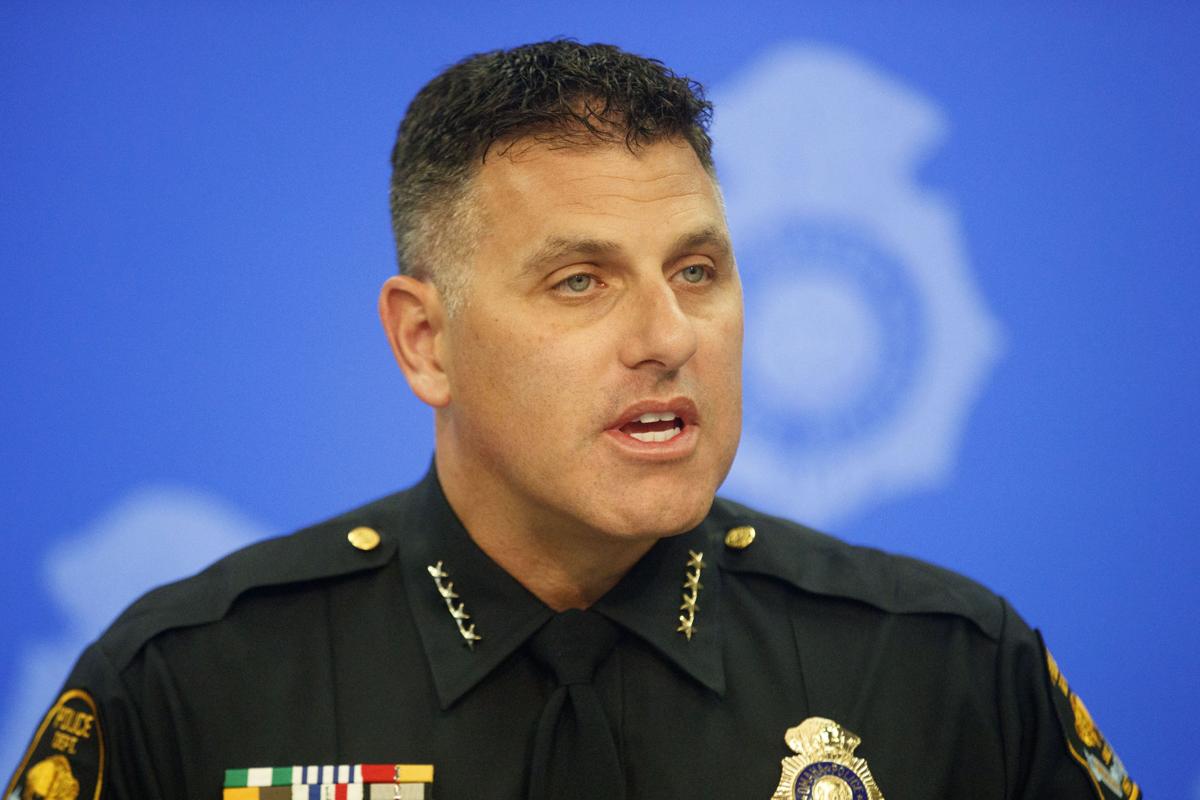 Omaha Police Chief Todd Schmaderer speaks June 9 regarding an in-custody death after officers used a Taser on a man. 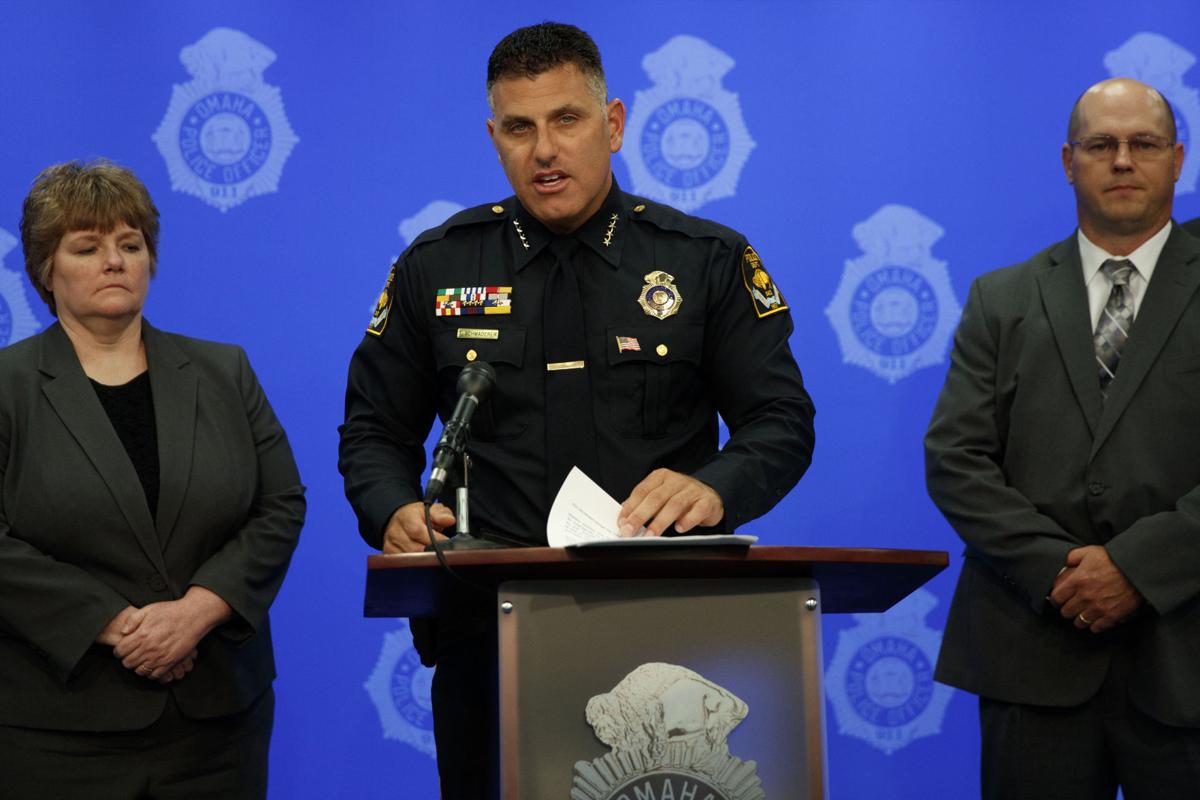 Omaha Police Chief Todd Schmaderer speaks regarding the in-custody death of a man in Omaha. 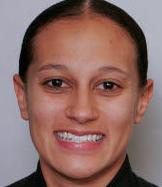 Omaha Police Chief Todd Schmaderer speaks June 9 regarding an in-custody death after officers used a Taser on a man.

Omaha Police Chief Todd Schmaderer speaks regarding the in-custody death of a man in Omaha.

Twelve electric shocks by a Taser — each five seconds long.

Three of the jolts when the mentally ill man did not resist.

Multiple punches to the head even as he sat motionless and unarmed.

Officer Scotty Payne, who used the Taser on the handcuffed man, and Officer Ryan McClarty, who dealt the blows, were recommended for termination, The World-Herald learned. Schmaderer could not say which of four officers involved in the crucial parts of the encounter with Bearheels were being fired, for legal reasons.

“In this incident, despite our extensive training, we failed,” Schmaderer said. “The Omaha Police Department made a mistake on this occasion, and we’re doing whatever we need to to correct it.”

If Schmaderer’s decision to fire the two officers is confirmed by the city’s Human Resources Department, Payne and McClarty can appeal to the Personnel Board or through an arbitration hearing.

The chief said all officers will receive refresher training, and the department plans to beef up field supervision and recruit veteran law enforcement officers from other agencies.

Schmaderer said inexperience was a factor in the fatal encounter outside the Bucky’s convenience store at 60th and Center Streets.

“It did not appear that anybody took charge of this call,” he said. “We were with Mr. Bearheels for almost an hour ... and that’s too long.”

Bearheels, 29, was not breathing and had no pulse when he was taken to the Nebraska Medical Center, where he died.

Each of the four officers has had less than five years on the force. But Schmaderer said all four had received extensive training on use of force, de-escalation techniques and dealing with the mentally ill.

Officers Jennifer Strudl and Makyla Mead, who were at the scene before Payne and McClarty arrived, have been placed on paid administrative leave pending an internal investigation.

Much of the encounter was caught on cruiser cameras, but video and audio will be released either after a grand jury decision or during a potential criminal court case.

Douglas County Attorney Don Kleine said that, depending on what the evidence shows, he could decide to charge officers on his own without going through the secret grand jury proceeding. He is awaiting autopsy results and police reports to determine whether to file charges.

In general, Kleine said, excessive force cases could lead to an assault charge — or a manslaughter charge, if the use of force is believed to have caused the person’s death.

Schmaderer said Bearheels’ death was not caused by blunt-force trauma.

Mitchell Chalepah, Bearheels’ brother, said he thinks Payne, McClarty, Strudl and Mead all should serve jail time for their roles in his brother’s death.

“They took my brother’s life away,” he wrote in a Facebook message. “He was just trying to come home, that’s all. He just wanted to come home. (I) want JUSTICE for my big brother.”

McClarty, Mead and Strudl did not return calls Friday seeking comment. Payne referred a reporter to his attorney, but declined to provide the lawyer’s name.

Tasers, he said, are a less lethal option officers can use before resorting to deadly force. Police are trained to deploy a Taser three times — any more is a “risk of health concerns,” Schmaderer said. If the three shocks do nothing, then officers should move on to other tactics, according to their training.

Bearheels was shocked with a Taser 12 times, the chief said, most of those while he was in handcuffs.

“When you have somebody in handcuffs, oftentimes it’s best just to get a bunch of people around him and control it,” Schmaderer said.

Bearheels was kicked off a bus that was taking him to Oklahoma City last Saturday, just before midnight. He is bipolar and schizophrenic, family members said, and was not taking his medication.

Officers first encountered Bearheels in the Aksarben area at 3:50 p.m. Sunday outside a Brazilian Wax salon where he was licking windows. Officers gave him water and offered to take him to a shelter or a hospital. Bearheels became agitated but did not commit any crime, so he was allowed to leave the area.

Renita Chalepah, Bearheels’ mother, was expecting her son to arrive in Oklahoma City at 12:30 p.m. Sunday. She called Omaha police Sunday night to report him missing.

Strudl and Mead were dispatched to the Bucky’s convenience store at 6003 Center St. at 12:36 a.m. Monday because Bearheels was refusing to leave.

Strudl has been trained as a crisis intervention team officer who received advanced certification in dealing with mentally ill adults.

Schmaderer said Strudl used some recommended tactics — speaking calmly, softly and clearly — in her encounter with Bearheels. His speech was garbled and unintelligible.

Strudl and Officer James Mosby were able to put handcuffs on Bearheels without incident and put him in the back of a cruiser.

Strudl spoke on the phone with Renita Chalepah for 23 minutes. Mead arrived and called a sergeant, who said there was insufficient justification to detain Bearheels or place him in emergency protective custody.

Kleine — whose office handles mental health commitments in the county — said he would like to know what the officers knew and relayed to the sergeant.

Bearheels’ behavior could have qualified him for a trip to a mental health facility, Kleine said.

Under state law, authorities can seek a commitment if the person is a danger to himself or others.

Officers decided to follow Chalepah’s request to take Bearheels to the bus station.

Bearheels was in the cruiser for 36 minutes. When Strudl opened the door to put Bearheels’ seat belt on him, Bearheels leapt out of the car and walked away.

Payne, who had just arrived at the scene, joined Mead and Strudl in trying to maintain control over Bearheels, who was 5-foot-9 and 250 pounds. They requested backup at 1:32 a.m., and McClarty arrived three minutes later.

After additional warnings, Payne loudly announced, “Taser, Taser, Taser” and discharged the Taser, which hit Bearheels in his abdomen and right thigh. The shocks “did not effectively incapacitate Mr. Bearheels,” the chief said.

For Schmaderer, the disturbing actions began when McClarty dragged Bearheels by his ponytail and waistband toward the cruiser.

Payne continued to activate the Taser. Bearheels then ended up in a seated position with his back against the rear of the cruiser. For the next minute and 45 seconds, as Bearheels sat on the ground and offered no resistance, the chief said, Payne activated the Taser three times.

“These are egregious violations of the Omaha Police Department’s policy, procedures and training on use of force and the use of a Taser,” the chief said.

Bearheels was able to pull his left hand out of the handcuffs and turned toward McClarty, swinging his arms and kicking his legs. In the process, Bearheels ripped skin off his hand.

McClarty hit Bearheels in the head multiple times with his fists, Schmaderer said. While McClarty delivered the blows, the chief said, Payne activated his Taser.

“Video showed Mr. Bearheels to be motionless on the final few strikes,” Schmaderer said, “which is in direct violation of our policies and culture at the Omaha Police Department.”

Bearheels was placed on a gurney, his hands cuffed to the rails. Inside the rescue squad, he stopped breathing and didn’t have a pulse.

He was pronounced dead at 2:16 a.m., about an hour and a half after Strudl first encountered him.

Renita Chalepah, Bearheels’ mother, could not be reached for comment Friday evening. Mitchell Chalepah said his mother was “terribly hurt.”

Victor Chalepah, Bearheels’ uncle, praised the chief online for his openness: “At least he had guts to admit wrong for the department ... and that deserves some respect.”

Services for Zachary Bearheels have not yet been scheduled, but his body is in Oklahoma City, a relative said. Family members are trying to raise money to cover funeral costs. They have created a GoFundMe page in the hopes of raising $3,800.