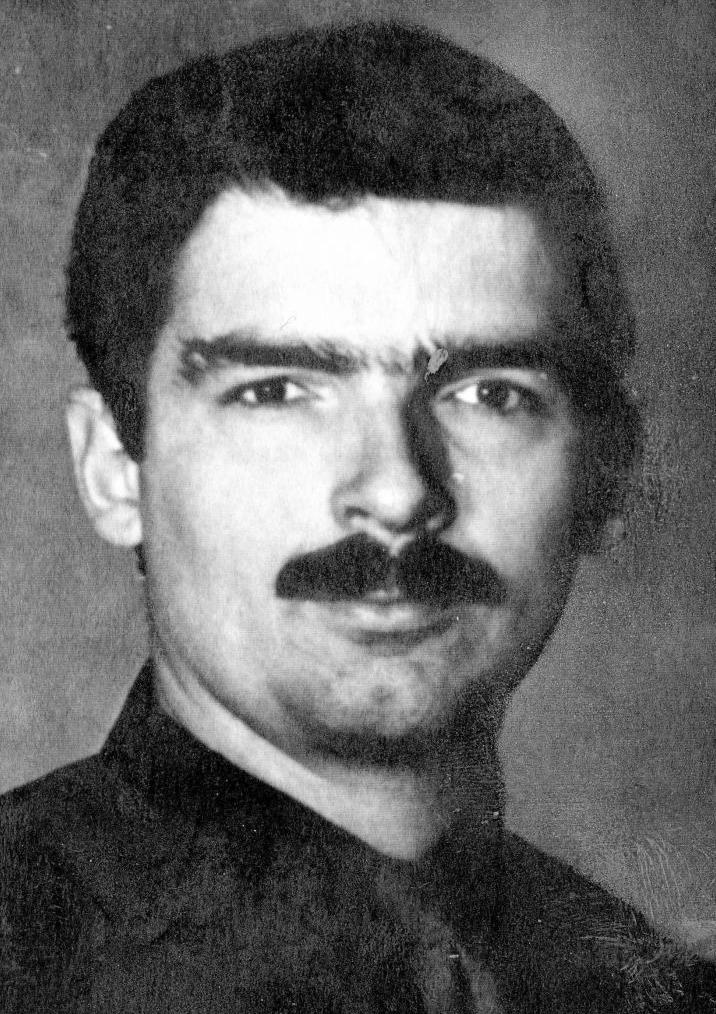 LEXINGTON, Neb. — Shortly before a teenage Eric McCain did the unthinkable, he had an ominous conversation with his mother.

Jeanne McCain and her husband knew their 17-year-old son had been drinking when he got home past curfew one night in the summer of 1990, but he said nothing about being ticketed earlier that night by Gothenburg police for vandalizing cars at a local auto dealership.

His mother followed the teen into his bedroom, where he broke down and apologized for everything he’d done wrong.

And as she turned to leave the room, he said, “Goodbye.”

What she didn’t know was that before coming home, McCain had made a dark pledge to two of his younger friends, according to a statement he gave decades ago to a probation officer. It was something he’d actually been talking about for months.

“I told them to wait and listen to the sirens and to tell everybody goodbye because I was going to kill a cop,” McCain said.

McCain backed up his words on July 2, 1990, when he gunned down Sgt. Glenn Haas in the lobby of the Gothenburg Police Department. At the time, the law required automatic life in prison for juveniles convicted of first-degree murder.

On Thursday, McCain asked a judge to consider that, at 17, he could not fully comprehend the consequences of his actions. Under recent U.S. Supreme Court decisions, McCain qualified for a second sentencing hearing so he could show that he has matured, accepted responsibility and reformed his life.

Wearing handcuffs, shackles and the chiseled face of a 43-year-old man, McCain asked the judge for his freedom. He said he planned to move to Omaha, where he would live with his brother and devote the rest of his life to helping kids learn from his mistakes.

The day before he made his request, two police officers were shot to death in ambush killings in Des Moines and one of its suburbs.

Those police slayings were on the minds of the 20 law enforcement officers who attended the court hearing in the central Nebraska community of Lexington. They came to show solidarity with a fallen officer and hear how District Judge Donald Rowlands would decide a second sentence for McCain.

The judge had to account for a 2012 decision by the U.S. Supreme Court that forbids automatic life terms for those who commit murder before turning 18. The decision, which must be applied retroactively to such cases, is based on research showing that a person’s brain is not fully mature until his or her mid-20s.

In response to the court decision, the Nebraska Legislature ended automatic life terms for juvenile killers two years ago, allowing instead a minimum of 40 years and a maximum of life. A judge can still lock up a young killer for life but must consider whether the youth can be rehabilitated for eventual release.

Among those in quiet attendance Thursday was the police sergeant’s widow, Janet Haas, and their two children, now adults with children of their own.

Before the hearing, Janet Haas struggled to talk about that terrible time more than two dozen years ago, preferring to describe what she has missed in the years since.

Her late husband’s smile. The way he struck up conversations with strangers. The twinkle in his eye when he spiked the supper of a fellow officer with hot peppers.

His desire to wear a badge not for power or prestige but because it allowed him to help those in need.

And she said she misses his laugh, telling a story of how they once attended a movie so corny that only he thought it was funny. She soon realized that her husband’s guffaws had infected others in the theater, who were now laughing at the film’s horrible dialogue.

“He just made people feel good,” she said.

Glenn Haas was a native of Watertown, New York, who quit high school to enlist in the Marines. He served in combat in Vietnam, where he was wounded at least three times.

He discovered Nebraska when he was invited on a trip by a military buddy who hailed from the state. He loved the open spaces, the friendly people and, of course, Janet.

He got a job with the Cozad Police Department, where he worked for eight years. He joined the Gothenburg department in 1978.

His daughter, Jennifer, was 15 when he was killed; his son, John, was 13. Janet Haas now has five grandchildren, ranging in age from 21 to 4.

“He was extremely well-liked in the community,” said Gothenburg Police Chief Randy Olson, who served alongside Haas. “They all knew they could count on Glenn, and he certainly loved Gothenburg.”

A review of long-ago police records shows that the department had made no fewer than 14 contacts with McCain in roughly two years before the shooting. Most involved fairly minor infractions, nothing violent. Haas handled only three of them.

Yet McCain would say after his arrest that he felt persecuted by police and by Haas in particular.

As he drove from his family’s farm back into Gothenburg 26 years ago, McCain deliberated about whether to carry out his plan. He feared that his friends would laugh at him if he turned back.

McCain walked into the tiny lobby of the Police Department with his high-powered hunting rifle at his side. Over the desk that separated the lobby from the offices, the dispatcher couldn’t see the rifle as McCain asked to speak to an officer.

“I wanted to go back, but I couldn’t,” a young McCain would tell a probation officer. “I felt I had to do it now. I shot the gun. I wasn’t aiming and I hit him.”

Haas, 42, died hours later at the hospital in Kearney from a single gunshot wound to the midsection.

McCain fled and a massive manhunt ensued. A few hours later, his car was spotted. After a high-speed chase, McCain jumped out of the car and ran into a cornfield, where he was captured.

He left the rifle in the car.

Janet Haas said that if not for having to raise two children, she would never have survived the pain and depression. She also credited support from the community and, especially, members of her Lutheran church.

She held down her job as an insurance agent. For a time, she read various books, trying to understand what motivated random violence. But she never found her answers, she said through tears.

Once, her pastor brought her a letter from McCain, which he’d sent not long after arriving in prison. She refused to open it.

But she said she feels sadness for his parents, who also attend her church.

“They lost a son,” she said. “But he’s still living. They can go see him. I have to go to a graveyard to talk to my husband.”

During Thursday’s hearing, McCain’s lawyer summarized the progress McCain has made during 26 years of incarceration.

Jeff Pickens of the Nebraska Commission on Public Advocacy discussed how psychologists determined that McCain had reached full maturity about the age of 28, which was demonstrated by a sharp drop in behavioral problems in prison. Although he has amassed 72 misconduct reports during the years, no serious incidents have been reported since 2001.

The psychologists also said a teenage McCain refused to respect authority. He struggled to make friends, was picked on at school and fell in with the wrong crowd. The approval of his peers mattered more than anything.

The fact that McCain cared more about losing face with his friends than taking a life is a hallmark of his immaturity in 1990, Pickens said.

McCain is a Christian, Pickens said, referring to testimony from a minister who has met with McCain for years. While locked up, McCain obtained a college degree in religious education, which took him four years to complete. He earned a 3.93 grade-point average.

In addition, McCain is a skilled woodworker who trains other inmates at Cornhusker State Industries.

“Mr. McCain is not irreparably corrupt,” his lawyer said. “He does not qualify for a life without parole sentence.” In arguing for a life term, Dawson County Attorney Elizabeth Waterman said McCain’s friends told investigators that he frequently talked about killing police officers and being killed by them.

That is a hallmark of premeditation, not the sudden impulse of an emotional teenage boy.

And she pointed out that had McCain been just a few months older, past the age of 18, he would have qualified for the death penalty for killing a police officer. In a sense, his age has already provided him a lighter sentence, she argued.

McCain came from “an excellent family,” with no history of abuse or neglect. That points to somebody who is self-centered, without empathy, bad to the core, the prosecutor said.

She also implored the judge to consider the unprovoked slayings of law enforcement officers in places like Dallas, Baton Rouge and Des Moines.

“It is incomprehensible that the men and women who are sworn to protect their communities are being hunted like deer, for no reason other than the fact that they are the police,” she said. “The way to stop this trend is to hold these offenders accountable by imposing the harshest sentence available.”

Give McCain the harshest sentence available, she said.

Then, after taking a few deep breaths, McCain addressed the judge and those in the courtroom, including the fallen officer’s family. He said he has come to understand the devastation he caused.

“I have wished throughout my life that I could take back my actions and restore the peace that once was,” he said, struggling to contain his emotions.

“It haunts me to know that I have inflicted so much pain in so many lives.”

Finally, it was Judge Rowlands’ turn to speak.

He mentioned the numerous letters he received, both from McCain’s supporters and from those who think he should die in prison. He mentioned the officer’s military service and his public service.

Then he pointed to recent U.S. Supreme Court actions in other states that have vacated the harsh sentencing of other defendants, like McCain, who killed when they were juveniles. Giving McCain another life term would be reversed on appeal, the judge said.

He sentenced McCain to 80 to 99 years, giving him credit for 26 years served.

With good time credit, which roughly cuts the sentence in half, McCain would be eligible for parole when he is 57 and would obtain his mandatory release about 10 years later.

When McCain was sentenced 26 years ago, Janet Haas never thought he would get out.

“He’s where he’s supposed to be, in my opinion,” she said.

Man who got life as teen for killing Gothenburg, Neb., officer seeks freedom

A man sentenced to life in prison as a teenager for killing a police officer wants to be freed.