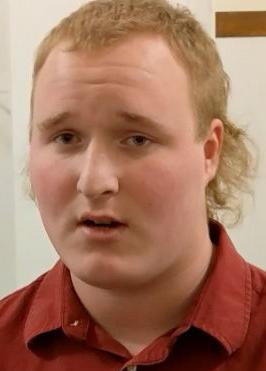 His eyes seemed empty. The 17-year-old’s creepy laugh reminded his mother of the movie “The Shining.”

Just before he shot one deputy and missed another, Tyler Pitzl punched his mother in the face and aimed a shotgun at her.

“I was looking down the barrel of the gun, at my son,” Gail Pitzl said in court Tuesday . “I said Tyler, don’t shoot, it’s Mom ... there was no acknowledgment. There was no getting through to him.”

Pitzl, a lineman for his high school football team, wasn’t his normal self when he fired at law enforcement officers and terrorized his parents early Sept. 3, his mother testified.

Initially charged as an adult with five felonies, including attempted murder, Pitzl faced a maximum of 220 years in prison.

But on Tuesday, his attorney, James Martin Davis, argued that Pitzl would receive better rehabilitation if his case were moved to juvenile court.

“Clearly there was something going on that needs to be evaluated,” the judge said.

Prosecutor Amy Jacobsen then asked Polk to review the 141 pages of police reports on the shooting and reconsider.

Polk declared that his ruling would stand.

Douglas County Attorney Don Kleine said he would appeal the decision because Pitzl is about 15 months from turning 19, at which point he’d no longer be under the authority of juvenile court.

“There should be jail time, or should be something of a significant period of time to at least monitor this person,” Kleine said.

Prosecutors said the shooting was an ambush against officers — Pitzl was hidden inside a building while he shot at the two deputies outside.

The deputies arrived at a home off U.S. Highway 275 south of Waterloo after Pitzl’s father called 911. Dennis Pitzl called for help because his son was becoming violent and chasing him and his wife with a baseball bat.

Gail Pitzl testified that her son was maniacally laughing as he swung the bat at the front door, attempting to get inside. When the banging fell silent, Gail Pitzl ran to the back door, where she encountered her son.

“You didn’t think I could get in, did you?” Tyler Pitzl asked his mother while laughing crazily, she testified.

Pitzl attacked his parents, lifting furniture and attempting to get at a safe that contained about 20 firearms.

He ran outside and started smashing windows with the bat, then returned to meet his parents on the patio and became “eerily calm.”

The teen then said he was thirsty. His parents told him to go inside and get a drink, thinking he was calming down. Instead, Tyler Pitzl returned, clutching a 12-gauge Winchester shotgun. He ran toward the driveway as deputies arrived.

“I was sure that the shots that I was hearing was him pulling the gun on himself, because that’s the last thing he told me he was gonna do,” Gail Pitzl said.

Instead, Tyler Pitzl fired at two deputies, who had taken cover behind their cruisers.

One deputy was hit in the hand and forearm. The other was uninjured.

Deputies shot back, striking Pitzl at least once, damaging a kidney, intestine, spleen and colon. He woke up from a medically induced coma days later and told officials and his parents that he didn’t remember the violent night.

Forensic psychiatrist Terry Davis testified that he believed Pitzl suffered brain damage from a football game the night before, contributing to his outburst. A David City player had bull-rushed him and made helmet-to-helmet contact four times during the Sept. 1 game, Pitzl’s mother said.

Davis said he diagnosed Pitzl with neurocognitive disorder due to a traumatic brain injury.

Jacobsen pointed out that alcohol was likely a contributing factor — Pitzl had a blood-alcohol content of .148 at the hospital. Pitzl and other teens had apparently been drinking in the family shed after watching a Husker football game. One witness told officials that Pitzl became gradually violent as he drank more beer, Jacobsen said.

A probation officer testified for the state, saying that the serious violent charges against Pitzl and the short time until Pitzl turned 19 and would leave juvenile jurisdiction mean there are limited rehabilitation services available.

Regardless, Pitzl’s attorney said Pitzl belonged in juvenile court because he’s “a child.”

“Justice would be better served by transferring (him),” James Martin Davis said. “They can get to the bottom of what happened.”

Jacobsen argued that the lack of a criminal record for Pitzl shouldn’t outweigh the seriousness of the crime: someone could have died.

“There is simply not enough time for this young man to be treated in juvenile court,” she said.

Douglas County Sheriff Tim Dunning said the judge’s decision sends a bad message that a teen can shoot at law enforcement officers and end up in juvenile court: “Slap your hands and ‘adios.’ ”

“We’re very disappointed,” Dunning said. “The judge didn’t read the reports. He did not go with the recommendation of the probation officer.”

After the judge’s ruling, Gail Pitzl put her hands over her mouth in surprise. Her husband squeezed her, and they hugged their son.

Tyler Pitzl, who is taking online classes to finish his high school degree, spoke after the hearing.

“I’m very grateful for the police and everything that they do. Even if I don’t remember it, I am very happy that they did show up and stop whatever was happening,” Pitzl said.

“Apologize to the deputies,” Davis prompted.

“I am sorry for whatever damage I have done,” Pitzl said.

He continues to suffer from short-term memory loss and sensitivity to sound, and his voice and personality have changed, his mother said.

“I just want his brain to get better,” she said.

Tyler Pitzl has been charged with two counts of attempted second-degree murder, second-degree assault and two counts of use of a weapon to commit a felony. He is alleged to have fired on deputies, hitting one, with a 12-gauge Winchester shotgun. The deputy had minor injuries.