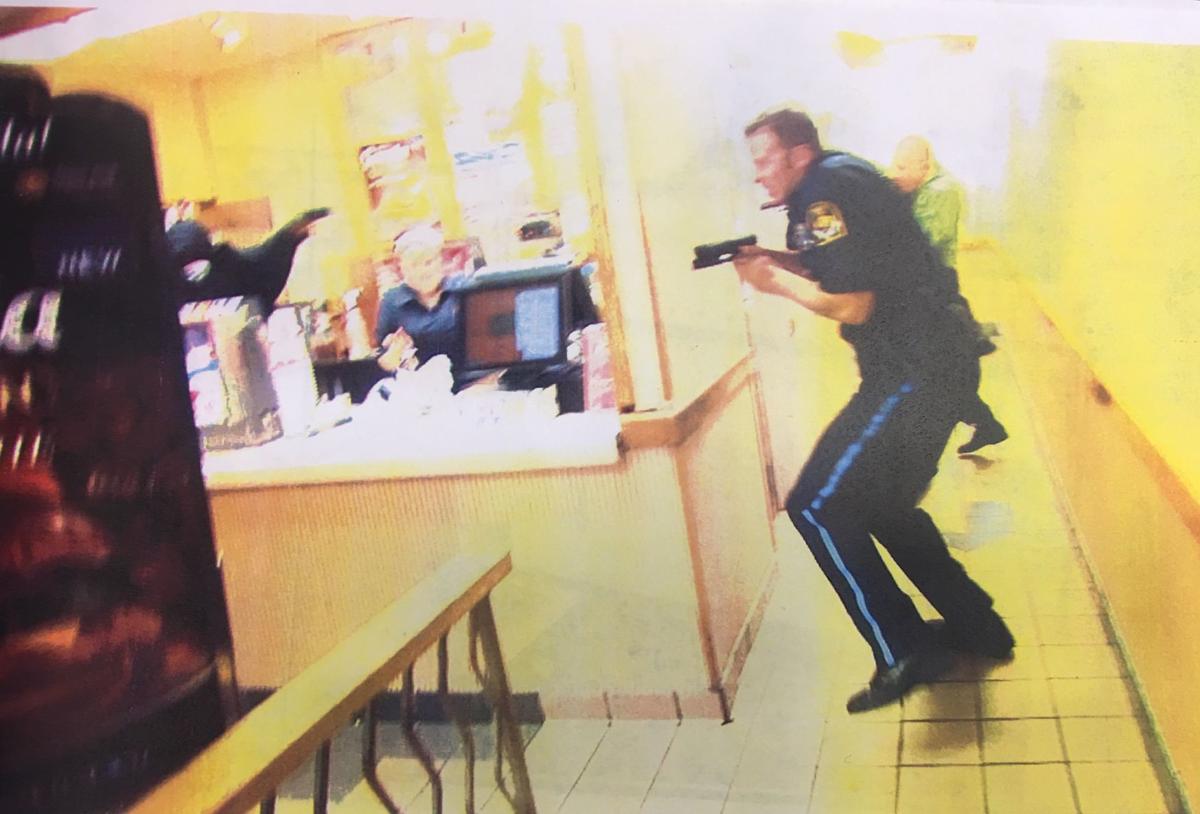 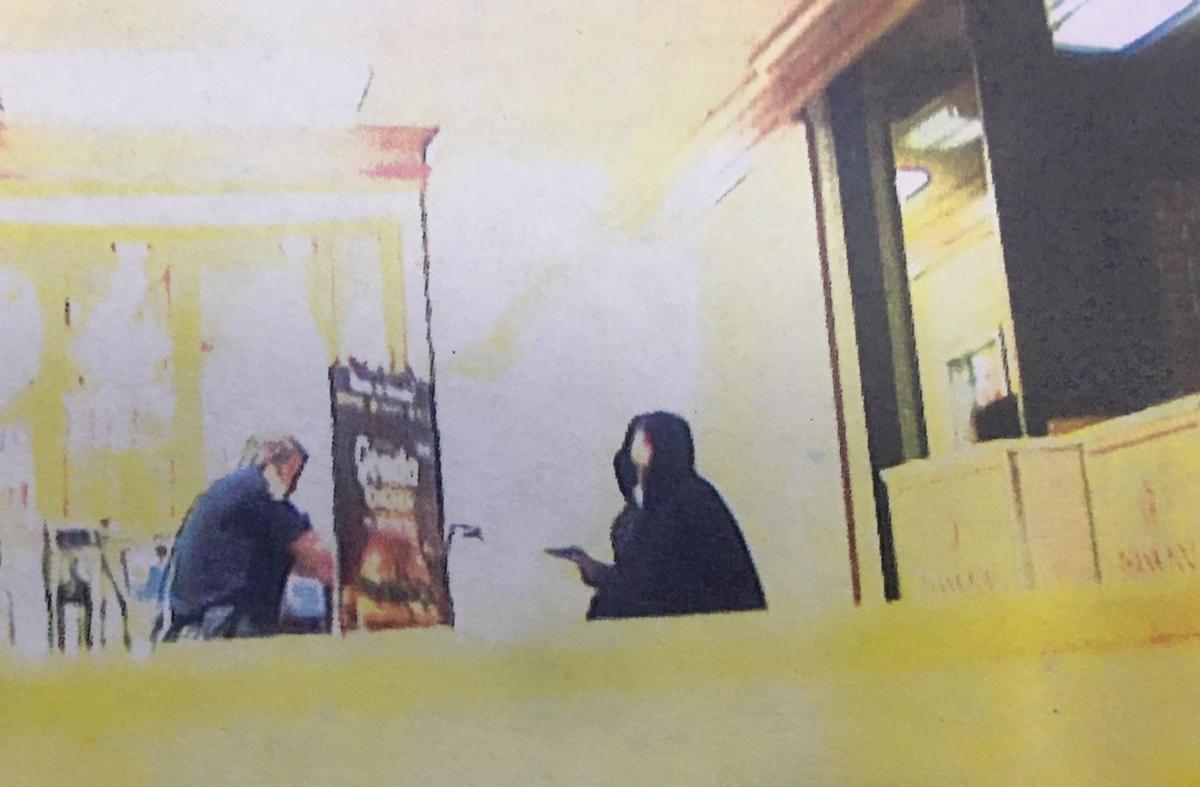 Officer Jason Wilhelm follows Washington as he points a gun and begins to flee the Wendy's.

Officer Jason Wilhelm fires on robber Cortez Washington as he exits the Wendy's.

Officer Jason Wilhelm follows Washington as he points a gun and begins to flee the Wendy's.

Officer Jason Wilhelm fires on robber Cortez Washington as he exits the Wendy's.

The attorney for the family of a “Cops” TV crew member inadvertently killed by an Omaha police bullet called the city’s defense to their wrongful-death claim a “House of Coulds.”

As in this: Bryce Dion, 38, could have stayed in the car.

And this: Dion could have escaped the vestibule where he died.

And this: The three Omaha police officers who opened fire 36 times could not see Dion.

Brian Jorde, who represents Dion’s brother, Trevor, and mother, Gloria, told a judge in closing arguments Thursday to focus on what Omaha police should have done when they rushed to a report of a robbery at the Wendy’s at 4308 Dodge St.

Officers should have told Dion, a sound technician for the show, and cameraman Mike Lee, to stay in the cruiser. Absent that, they should have scanned the restaurant to make sure they had an accounting for the two men they knew were with them. They should have stopped firing after the robber, Cortez Washington, had his back to them, Jorde said.

Jorde asked Douglas County District Judge Jim Masteller to award Dion’s estate $2 million. Masteller asked each side for legal briefs and will probably take a couple of months to rule.

Jorde noted that officers fired 24 times as Washington ran out of the restaurant, his back to them. It was likely then that one of the officers’ bullets struck Dion, who had stopped in the vestibule upon hearing gunfire.

“While they are scanning for Washington, they could have seen Bryce Dion — and they should have,” Jorde argued.

An attorney and a law enforcement expert hired by the city disagreed.

Assistant City Attorney Ryan Wiesen said Omaha police’s “entire use of force was reasonable.” Washington — who, unbeknownst to officers, was actually brandishing a pellet gun — still posed a threat to the officers and to anyone else he encountered. He never surrendered and he never dropped the gun, which looked real.

“A person who has used a gun still maintains a threat to you, even if trying to run away,” Wiesen said.

Further, Wiesen argued, no one forced the television crew into the restaurant. Once inside, he said, Dion had about 8 seconds to exit the restaurant after shots first rang out.

And Wiesen noted that Dion and Lee both wore bulletproof vests.

“You don’t wear a bulletproof, ballistic vest unless you know there is a possibility that you could get shot,” he said.

By that Aug. 26, 2014, evening, the “Cops” crew had ridden along with Omaha police for eight weeks. In turn, Omaha Police Officers Brooks Riley and Jason Wilhelm had considered Lee and Dion friends.

On the other hand, Omaha Police Detective Darren Cunningham, who had arrived at the robbery before the others, had no idea who the two were. He believed the two, dressed in dark clothing with bulletproof vests on, were members of the police department’s SWAT team or gang unit, he said.

Within seconds, the officers and the film crew would become part of history, and tragedy. Dion became the first “Cops” crew member killed in the line of work when an Omaha police officer’s bullet pierced his armpit, in a gap of his bulletproof vest.

The knowledge that Lee and Dion were there — or the mistaken belief that they were fellow officers — should have caused the officers to continually scan the restaurant for them and other innocent citizens as they fired upon Washington, Jorde said.

A law enforcement expert, hired by the city, said the officers acted appropriately and reasonably in the face of what they believed to be deadly force. Washington had raised a gun and opened fire on the officers at close range.

All three officers said they didn’t see Dion in the path of their guns.

Jorde asked the question Thursday: Did the officers have a duty to see him?

David Klinger, the city’s expert and a criminal justice professor at the University of Missouri-St. Louis, said it’s understandable why officers didn’t spot Dion. He pointed to various studies of people suffering from tunnel vision.

In one study, a classroom of people was asked to watch a video and give an exact count of how many times a team passed a basketball. A costumed gorilla walked into the middle of the video. Half of the observers were so focused on counting the passes that they didn’t see the gorilla walk into the play, Klinger said.

Klinger noted that the officers were mindful of the citizens and employees in the restaurant. At one point, Riley said he stepped to the side to ensure that he could shoot Washington without hitting a clerk at the cash registers.

Those same officers couldn’t account for someone they couldn’t see, Klinger testified.

Klinger noted that Washington never dropped his weapon and, in the officers’ minds, could have easily fired at them, again and again.

“So you’re saying every single shot was reasonable and appropriate?” Jorde asked.

Jorde zeroed in on several shots that were fired through the outer glass of the vestibule as Washington ran into the parking lot.

Even as Washington ran away, gun in hand, the threat remained, Klinger said.

“Officers are trained to fire until the threat has ceased.”

Attorneys dissect a video showing what happened the night Bryce Dion was accidentally shot and killed during a robbery. His family recalls a loving son and brother who was the glue that brought the family together.

Only asking for TWO million dollars? Should put Mayor Stothert and OPD for a lot more than that!
Like 20 million!

Why bring up Mayor Stothert?