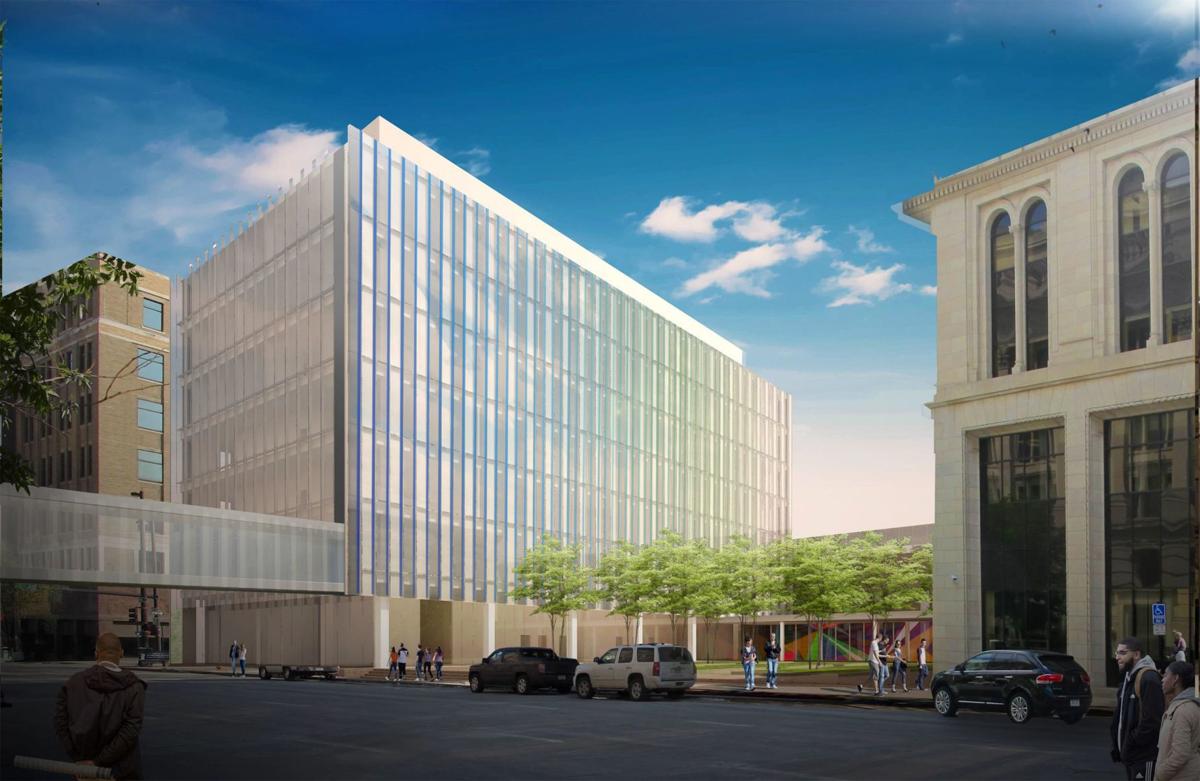 This rendering, viewed from 18th and Harney Streets, shows the courthouse annex part of the proposed Douglas County justice center development. The skywalk would connect to the Douglas County Courthouse. The building at right is the historic Metropolitan Utilities District headquarters. 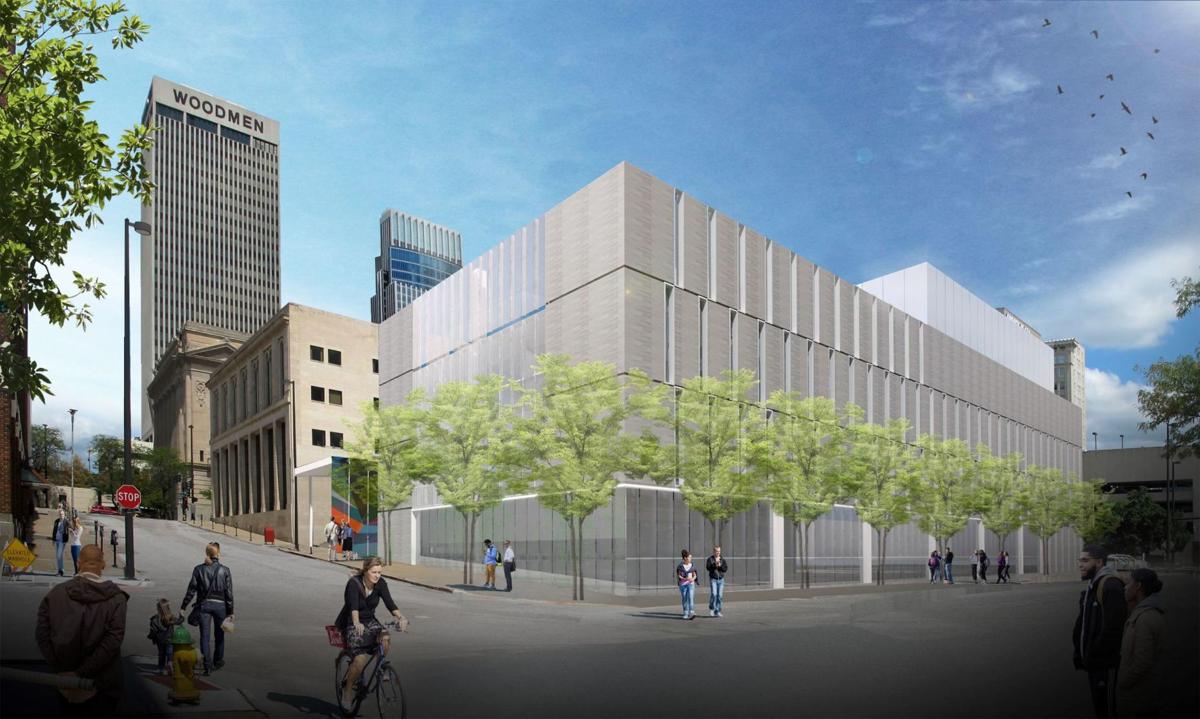 This architect’s rendering shows the juvenile detention center part of the proposed Douglas County justice center development, with the historic MUD headquarters building and Douglas County Courthouse in the background. The perspective is looking northeast from 18th and Howard Streets.

A former Nebraska Supreme Court judge from Omaha filed an 11th-hour lawsuit to stop the sale of bonds for the proposed Douglas County justice center, putting the $120 million project on hold again.

David Lanphier’s lawsuit hit Douglas County District Court on Monday, the day before the bond sale was to be finalized. Investors had agreed to purchase the bonds, and the sale was scheduled for closing on Thursday. The Douglas County Board and Omaha City Council, having previously approved the bond issues, were scheduled to take what normally are routine procedural votes Tuesday to approve the final bond rates and terms.

But nothing about this project has been routine.

The County Board postponed its Tuesday vote. The City Council dropped the item from its agenda. Attorneys began scrambling for a legal fight.

Bernard in den Bosch, a deputy Omaha city attorney who serves as legal counsel to the Omaha-Douglas Public Building Commission, said that a substantial delay could add millions to the cost of the project.

“We are unable to move forward with the negotiated transaction on Thursday,” in den Bosch said, noting that he is representing the building commission on this matter. “Absent this getting resolved in the next couple of days, that sale will fall through.”

If the bond sale falls through and the project goes ahead, in den Bosch said, the building commission would have to put the bonds on the market again and might have to pay a higher interest rate than the currently negotiated rate of 3.06%, which he called very favorable. The commission might have to pay some legal and bond rating costs again, and the start of construction could be delayed by months, he said.

But Lanphier and his attorney, retired 5th Judicial District County Court Judge Patrick McDermott, contend that the building commission shouldn’t be allowed to proceed with issuing the bonds at all.

They say that the project — a courthouse annex and juvenile detention center — are for Douglas County’s use only, and not for the City of Omaha. They say that runs afoul of a state statute that allows the building commission to issue bonds for “joint use” facilities for the city and county.

“Claiming that the project is a joint use project is simply a scheme and device to permit the issuance of bonds by the commission without a vote of the people of Douglas County,” the lawsuit says.

McDermott noted that an amended agreement between the county and city says that the county’s share of financial responsibility for the project is 100% and that the city’s is zero. He said a space for Omaha police officers to be while waiting to testify is the only designated city space that he’s aware of in the facility plans.

“They just called the city in as a means of avoiding a vote of the people,” said McDermott, who served for two decades as a county court judge in a district made up of a cluster of counties west of Omaha.

The second issue, he said, is the county’s and the building commission’s use of a nonprofit development corporation, including construction and management firms who will be contractors on the project. The nonprofit is not required to follow public bidding laws.

“That really violates the spirit of the statutes,” McDermott said. “Mr. Lanphier is a taxpayer and he has filed suit to have a court determine whether you can go this far with this scheme.”

Lanphier served on the Nebraska Supreme Court in the 1990s. Voters removed him in 1996 over unpopular Supreme Court rulings on second-degree murder and term limits.

Attorneys for the county, and the Douglas County Unified Juvenile Justice Center said it qualifies as a joint use facility of the city and county. Bond attorneys as well as in den Bosch researched that question, he said.

“We’re confident that the project meets the requirements of the statute for joint use,” in den Bosch said.

The new facilities will be connected by a skywalk to the Douglas County Courthouse. That makes the new facilities an extension of the joint use of the current city-county complex, in den Bosch said.

In addition, the county juvenile detention center houses young arrestees for the city under an agreement between the city and county, he said. There also will be an office for Omaha police in the new facilities.

Omaha City Attorney Paul Kratz said, “This is an interesting lawsuit presenting a unique argument.” He declined to comment on the joint use question.

Douglas County Attorney Don Kleine said police officers book youths into juvenile detention and will have a presence in the new detention center and courthouse annex.

“The city is a part of the juvenile justice system,” Kleine said. “This has been thoroughly looked at by elected officials of the City Council, County Board and Public Building Commission, and they have approved it.”

Proponents of the project are seeking to address criticism that their project is focusing too much on erecting buildings and not enough on improving the juvenile justice system or services for youths and families.

An interesting development in this saga. I still don't understand the motivation for not bringing this to a vote of the people.

Because they knew they would lose. Not what Democracy is supposed to look like right.

Thank you thank you thank you. We were forced to a lawsuit to stop the back room dealing and corrupt practices of the Douglas County Board and the Omaha City Council. Chris Rodgers and Marc Kraft and Borgeson and Jerram and Festerson and Grey and Pahls should be ashamed of themselves. They really thought doing the bidding of HDR, Mike Yanney and Kiewit was worth stabbing the taxpayers in the back. For shame! This lawsuit has merit and the deal is dead, thank goodness.

Bravo! This should go to a vote of the people, with public bidding and should be managed by government as it's taxpayer funded.

Exactly right. It was a travesty of justice that it got this far and a lawsuit had to stop this. How disrespectful of the Douglas County Board and the Omaha City Council for going along. Those politicians are bought and sold by HDR, Mike Yanney, and Ken Stinson of KIewit, who insisted they bring this expensive project the way they did.

Thank you David Lanphier for being a true public servant!