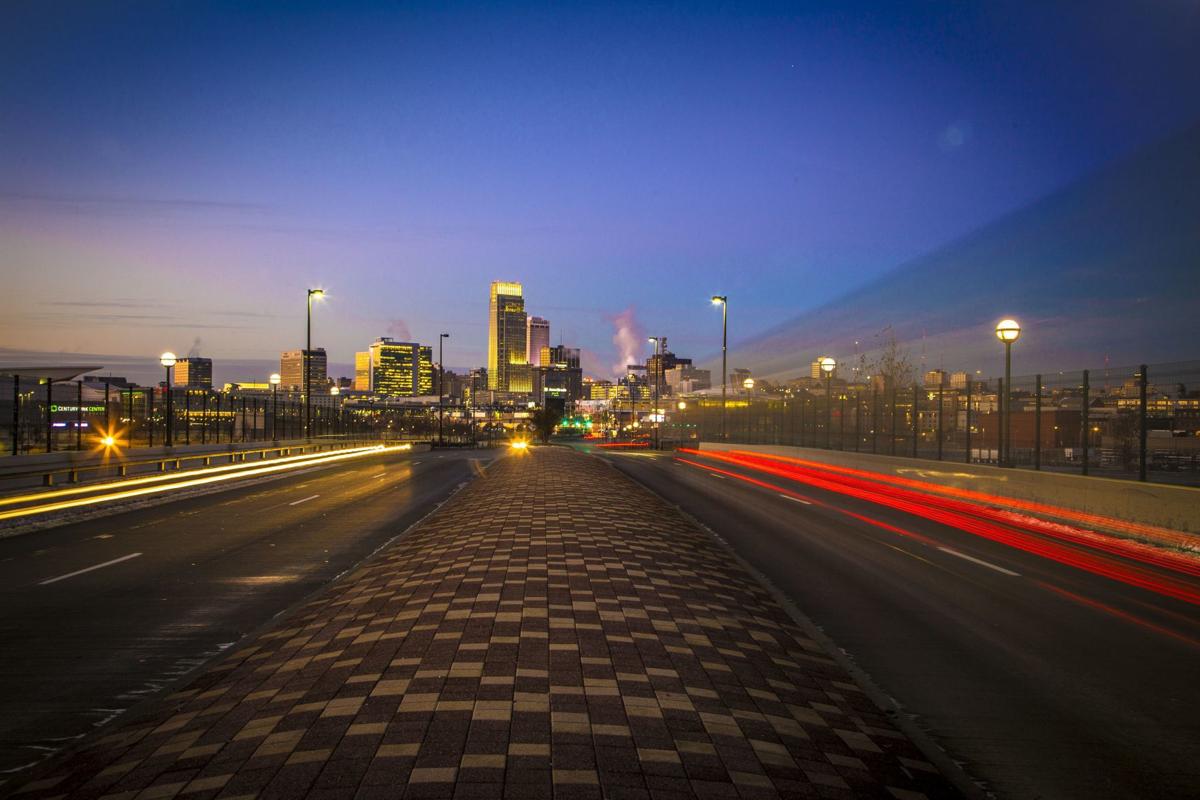 Engineers are constantly studying how to keep Omaha a 20-minute city. This scene is along Abbott Drive, on the approach to downtown Omaha. 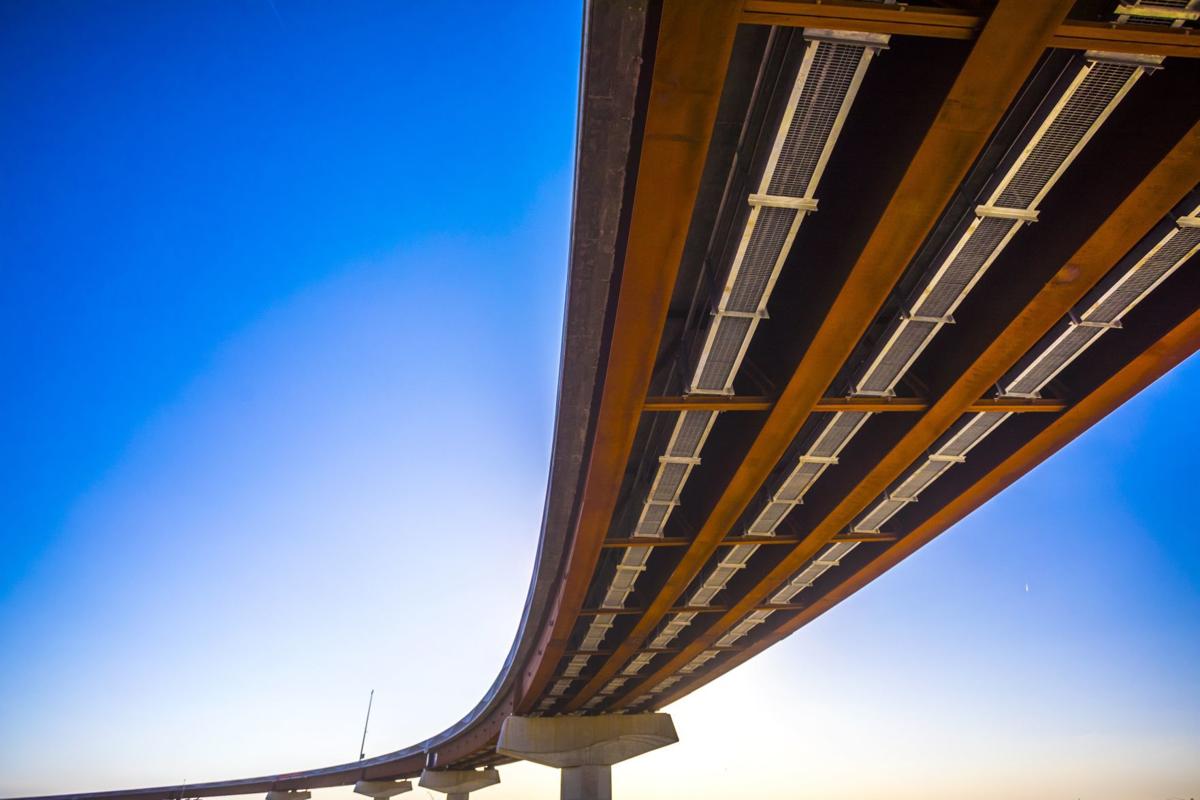 Elevated roadways are one way to bypass congested areas and keep traffic moving through cities. 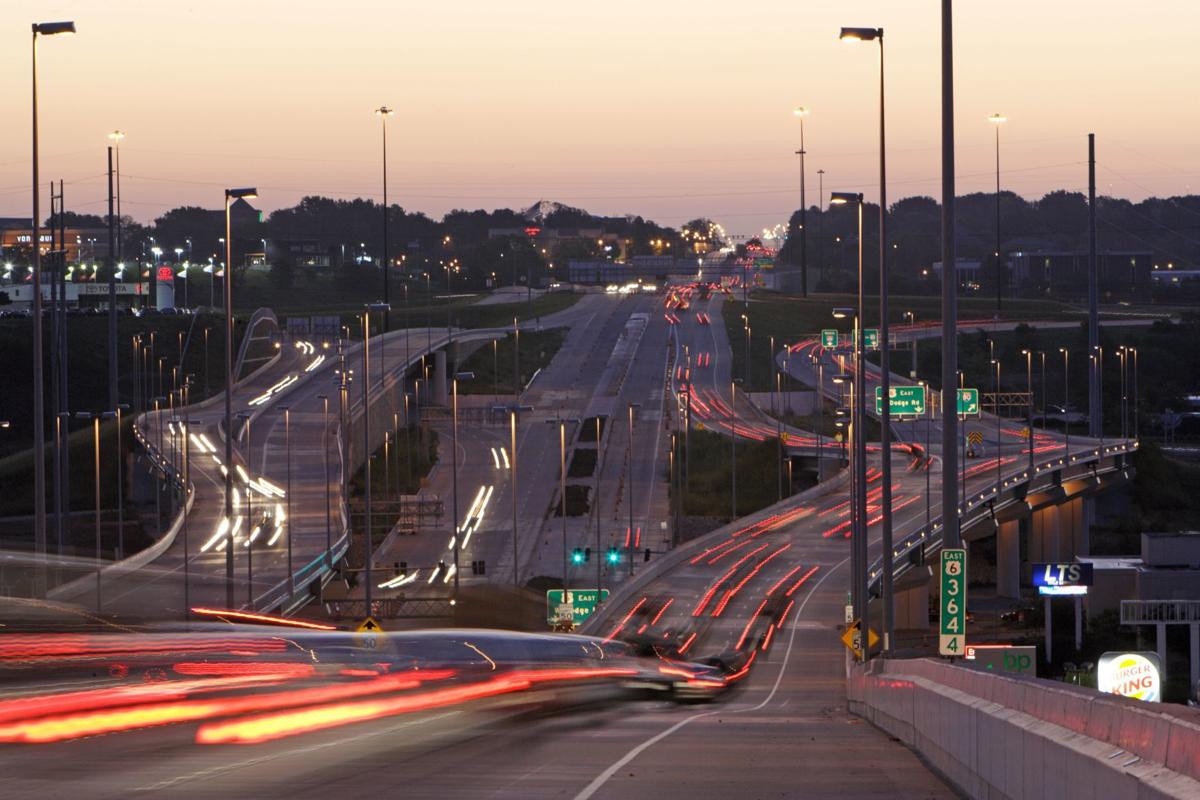 The eastern end of the West Dodge Expressway, which opened in 2006, lifted most through traffic above the once-congested 114th Street intersection and enabled motorists to travel by freeway from Fremont to Interstate 680 near Westroads Mall. 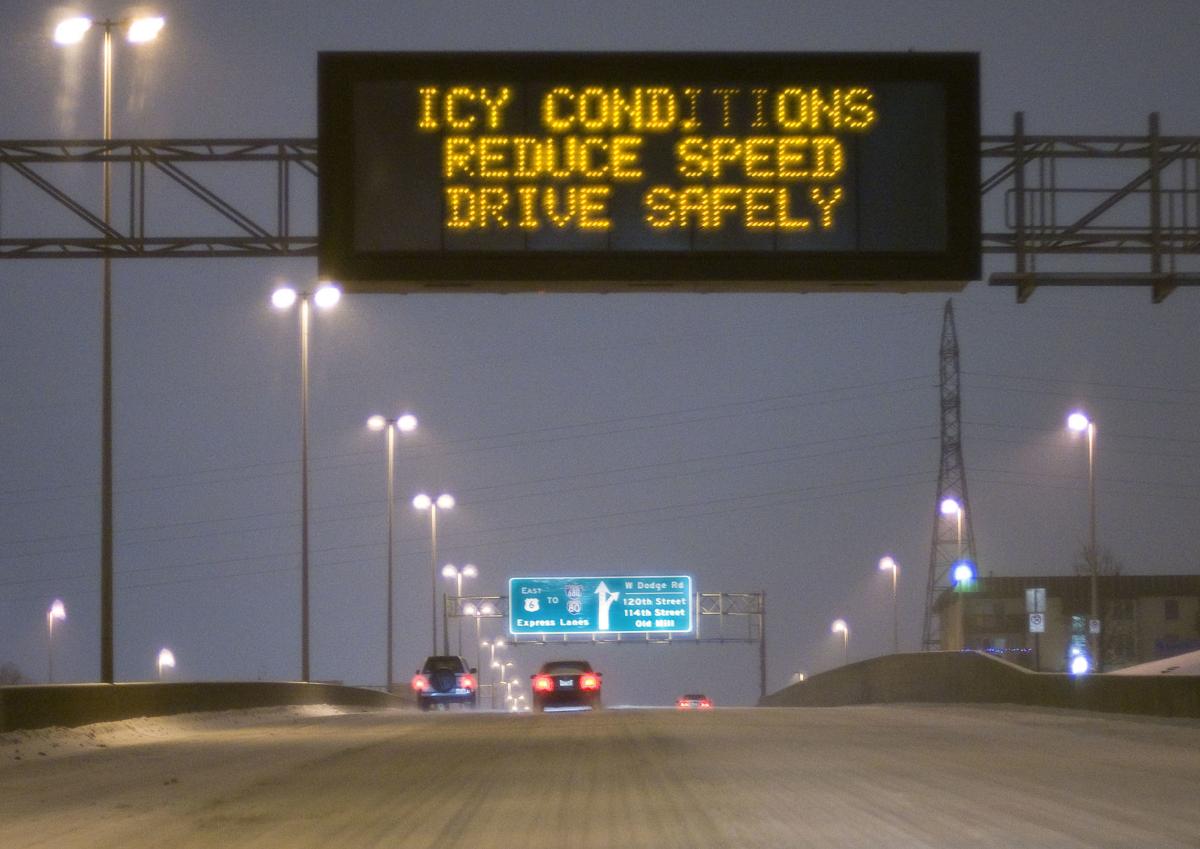 Engineers are constantly studying how to keep Omaha a 20-minute city. This scene is along Abbott Drive, on the approach to downtown Omaha.

Elevated roadways are one way to bypass congested areas and keep traffic moving through cities.

And this: Vehicles with the ability to sync their travel speeds and the distances between each other to make them less likely to crash or cause delays.

And even this: Vehicles that can sense when a pedestrian is about to step into traffic — and adjust accordingly — to potentially save a life.

Such advances might come sooner than you may think, said four experts who work to make travel on streets and highways in the Omaha metro area more efficient. The goal, they said, is to move more people in a more efficient manner while reducing crashes and decreasing injuries.

The World-Herald reported in 2018 that commute times — because of extra cars in an expanding metro area — are growing longer. The Census Bureau’s latest estimate showed that average travel times to work had risen to 19.3 minutes in 2012 — up from 18.6 minutes in 2008. Omaha as a “20-minute city,” the newspaper reported, might be behind us.

As growth pushes west in Omaha and into Sarpy County, planners predict that the Interstate system, the West Dodge Expressway and U.S. Highway 370 will attract a significant amount of additional traffic.

Measures to combat increasing travel times and keep drivers safe already are being integrated in the metro area’s traffic system.

Start with roundabouts, a circular intersection that has traffic flowing in one direction around a central island with priority typically given to traffic already in the junction.

Developed in Great Britain in the early 1900s and found throughout Europe, roundabouts emerged in the United States in the early 20th century. The first arterial roundabout in Omaha — situated at 42nd and Q Streets — has resulted in a 19% decrease in crash rates, said Mark Meisinger, senior traffic engineer for Felsburg Holt & Ullevig, the transportation engineering firm that designed the roundabout. A second, nearby roundabout showed an even greater decrease in crash rates.

Once motorists become used to the protocol for navigating roundabouts, Meisinger said, travel in those intersections is more efficient and safer. Crashes at roundabouts are less likely to cause more severe injuries and greater damage because collisions are more likely to be at slight angles rather than head-on or side-swipes, he said.

Hansen: The once-simple trip to work in Omaha? It's fading fast

“People were not in favor of them before they were built,” Meisinger said, “but now that crashes have gone down they are receiving favorable reviews.” Which could lead to more roundabouts in the Omaha area, he said.

Transportation experts are working to make travel more efficient at crash and other sites that involve first responders, said Tara Kramer, senior traffic engineer and project manager at HDR. Measures include developing pre-planned messages for dynamic message signs, which already are in place in Council Bluffs.

The signs feature color and can more closely replicate the traffic signs and messages they are trying to convey, she said.

The challenge of motorists rubbernecking at crash sites remains. Kramer said some agencies place screens around crash sites to limit the view of passing motorists, but they’re not always practical.

Motorists can help by clearing a crash scene off the roadway if no one is seriously injured, she said. It’s safer for everyone involved and it gets traffic moving more quickly. Look for emergency pullouts along roadways with heavy traffic, she said.

The goal is keep traffic on freeways flowing in harmony with fewer breakdowns, he said. Whether ramp metering can be cost-effectively implemented to improve traffic flow on the West Dodge Expressway, which features shorter entrance ramps, is unknown, Markt said.

Ahead are connected and, even further ahead, autonomous vehicles.

Connected vehicles synced by computers — with one in the lead and the other essentially drafting — reduce unnecessary stops and starts. A necessary first would be regulations set by the U.S. Department of Transportation to ensure uniform use throughout the country, Markt said. This technology also could allow vehicles to identify a potential problem, such as a pedestrian about to step into harm’s way, Hansen said.

When autonomous, or driverless, vehicles emerge is difficult to say. A key first step, Meisinger said, is infrastructure. “Hopefully, we’ll have the communication and backbone in place when they are,” he said.

Technology aside, the engineers have these suggestions to make travel safer and more efficient:

» “Put the phone down,” Meisinger said. First, it’s a safety issue, especially with young and inexperienced drivers. Phone use while driving also slows traffic. Meisinger often notices motorists who text while waiting at a traffic signal. “They don’t start at the green light as soon as they could. It may be a small deal, but it’s something that’s trending.”

» “Go with the flow,” Hansen said. Too often, motorists think they can improve their travel times by weaving in and out of openings between vehicles. In reality, this causes friction among motorists and may slow traffic. “In the end, it didn’t matter. Don’t be a jerk.”

» “Be flexible,” Kramer said. Vary travel times to and from work. “Consider going to work at 9 instead of 8. You might see a significant reduction in your drive time.”

Omaha streets and how they got their names

Projects altering the landscape, top jobs for top pay, and technology for maintaining the '20-minute city'

Drivers beware: These are Omaha's worst hills in the winter

With ice and snow and winter upon us in full, The World-Herald cast out to find the worst wintry driving hills in Omaha.

There is no combination of "smart light" or roundabouts that can defy physics. If Omaha continues to grow (both in size and in population) there will be more people trying to get around. Traffic, right now, is as good as it will ever be.

The only way to get people around more efficiently is to begin prioritizing public transit. A bus can move way more people than cars can. Give buses priority so it is actually faster to use the bus than to drive.

Second, the traffic itself should work as an incentive to live closer to your job. I bike to work and it takes about 20 minutes. That only works because I live near my job and my area of town is safer (still not great) than neighborhoods further west for biking.

Finally, I agree that phones and distracted driving are an issue. I get so upset when my life is threatened by a driver on their phone. But to say that phones are the reason for traffic is just trying to shift the conversation away from the reality. We can't all drive everywhere all the time and expect open roads. Most people will continue to drive, we just need to make it easier, faster, and safer for people who choose not to drive.

A bus full of passengers. Not in South-East Omaha.