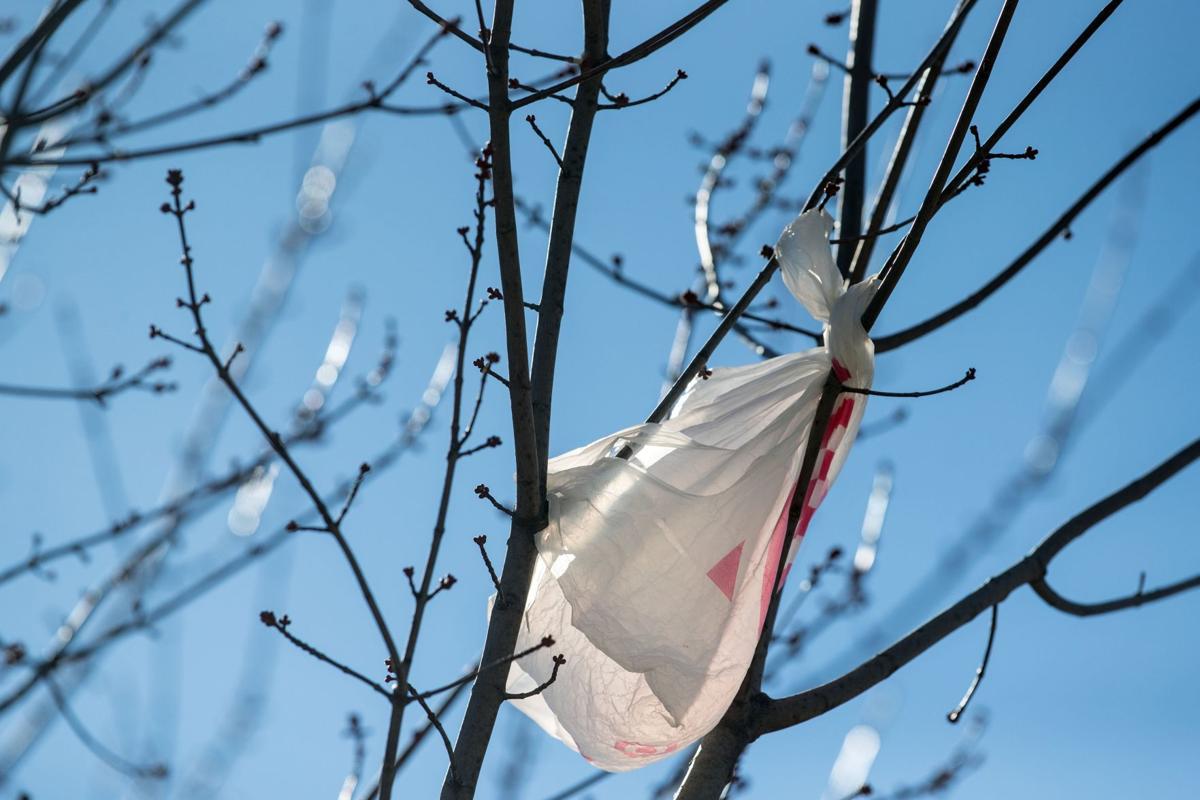 Two Omaha councilmen are considering regulating plastic bags, but the plastics industry says the bags aren't as harmful to the environment as they're made out to be and that fees do little to reduce litter. 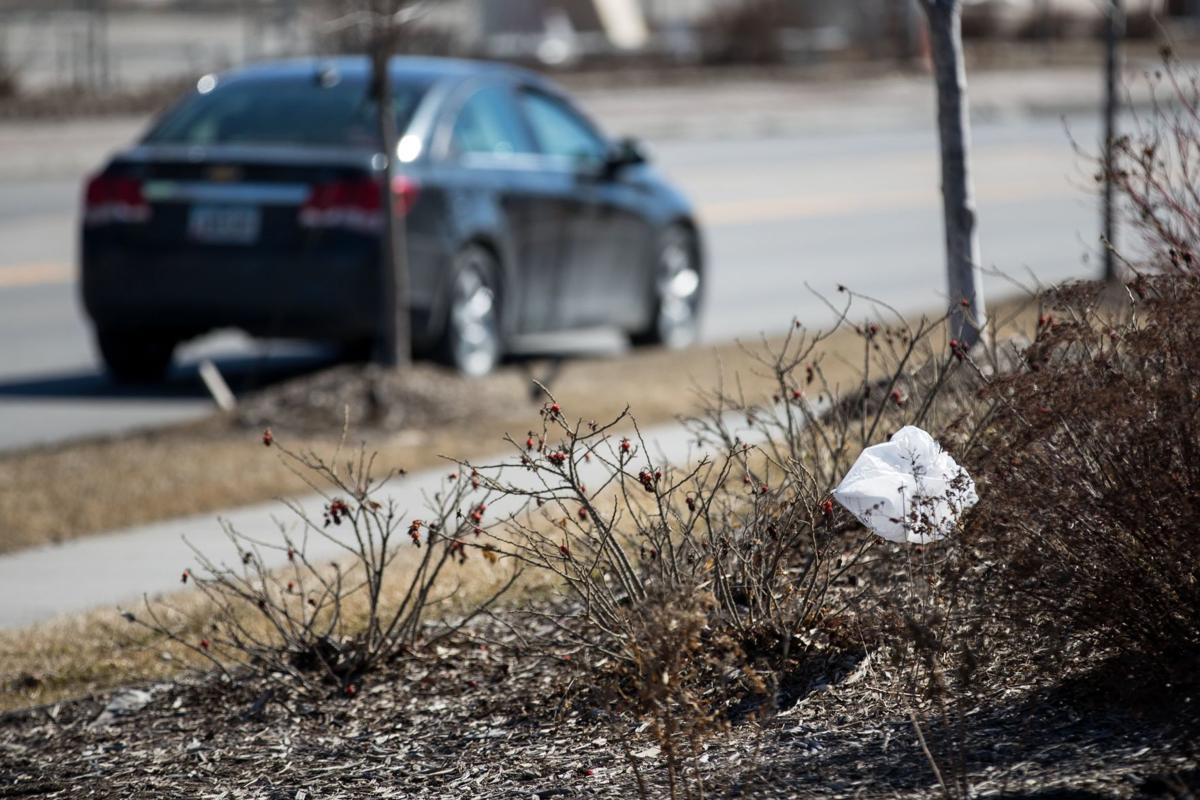 A plastic bag is hooked on vegetation on North Saddle Creek Road. 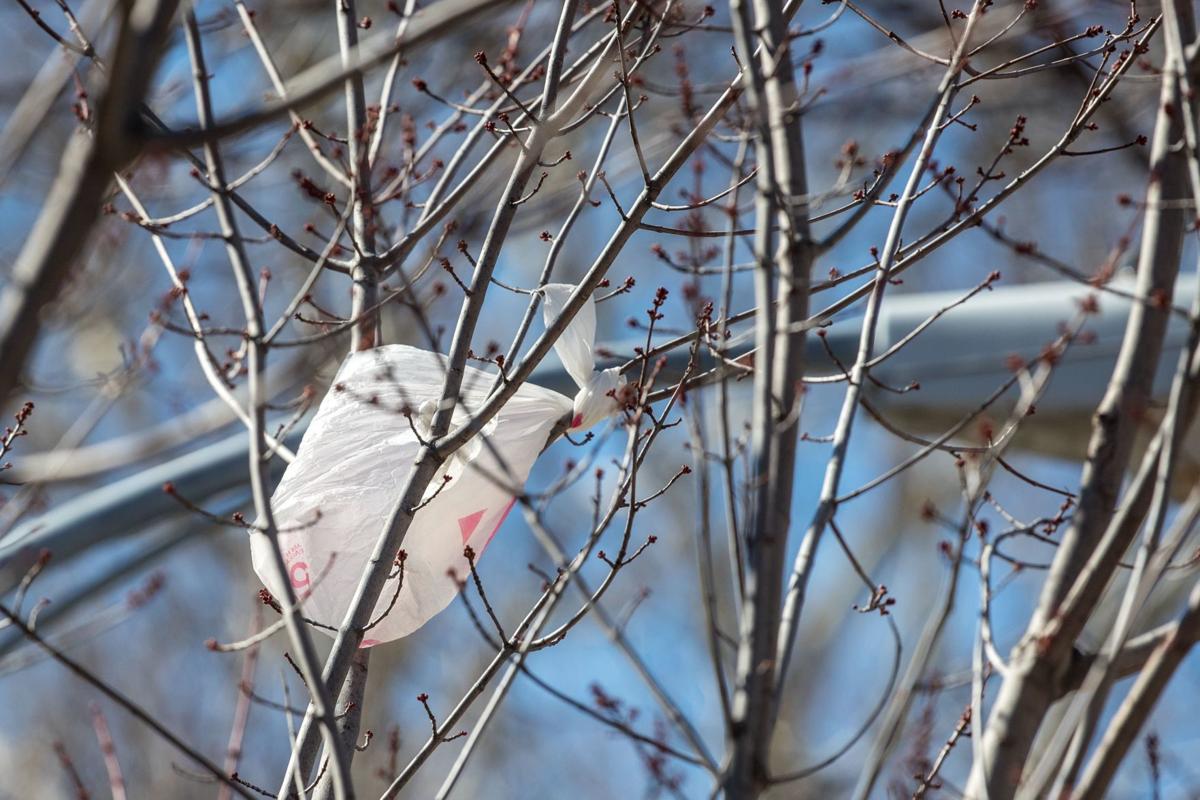 A plastic shopping bag is stuck in a tree on Mason Street near 45th Street.

Two Omaha councilmen are considering regulating plastic bags, but the plastics industry says the bags aren't as harmful to the environment as they're made out to be and that fees do little to reduce litter.

A plastic bag is hooked on vegetation on North Saddle Creek Road.

A plastic shopping bag is stuck in a tree on Mason Street near 45th Street.

Nebraska’s grocery association already opposes the idea of taxing plastic shopping bags in Omaha, and any proposal to regulate the bags would also likely invite a fight from the makers of the bags themselves.

“I would probably make the trip out to Omaha and just try to educate the City Council members,” said Matt Seaholm, executive director of the American Progressive Bag Alliance. The group is an arm of the Plastics Industry Association.

The plastics industry has spent millions of dollars opposing bag tax and ban measures around the country. In California, it spent more than $5 million on a signature drive and ad campaign to try to reverse a ban, according to a Stateline.org report.

The California effort failed — the bags remain banned there today. But the plastics group continues its pro-bag push, effectively lobbying some states to pre-emptively outlaw any local bans on bags.

Plastic bag debates, like the one brewing in Omaha, typically involve a few key questions: Whether regulating bags actually reduces litter; and whether reusable and paper bags are really more environmentally friendly than plastic.

Seaholm argues that plastic bags are only a small, unfairly targeted part of a larger litter problem, and challenges environmentalists who say they are a bad choice.

“Plastic is actually the best option as long as it’s used, reused and disposed of correctly,” he said. That assessment takes into account the amount of energy and material it takes to make different kinds of bags, he said.

To press his points in Omaha, Seaholm said he’d also engage with retailers, and could possibly launch an advertising effort to communicate directly to Omahans.

He’d find people here with strong views on both sides of the issue, interviews with shoppers have shown. And he’d find strong support among some City Council members for a ban or tax, and opposition from others.

City Council President Ben Gray and Councilman Pete Festersen said last month that they were considering proposing a 5- or 10-cent fee on bags, citing litter and other environmental concerns. Mayor Jean Stothert said she’d be more likely to support a ban than a fee, which she called a tax on groceries. Both Gray and Festersen then said they would support a ban.

Gray said last week that he will consider introducing an ordinance in the next month or so. If it is passed, he anticipates that it wouldn’t take effect until January 2019 to give retailers and residents time to adjust.

Gray said research shows the environmental benefits of cracking down on plastic bags.

The bags get into rivers and lakes and fish that people eat, he said. They also suffocate small animals, he said. Other bag opponents cite the cost of litter clean-up.

But like plastic bags themselves, the debate over what bags are best, and whether regulation can really cut back on litter, can quickly get into the weeds.

The lack of consensus about the right approach is evident in the patchwork of regulations around the country. The plastics industry says that patchwork of bag laws — where bags are banned in some cities, taxed in others and unregulated elsewhere — is bad for businesses and consumers.

As concern about plastics in the environment grows, Stateline’s report showed, plastic bags have become a source of political conflict, often between “blue” cities and their “red” states.

Some cities and states ban plastic bags, including Austin, Texas, much of Hawaii, and the entire state of California. Others allow a fee or tax. And at least nine states, including Iowa and Missouri, have the pre-emptive bans on bans.

Even where laws are passed, they’re not always a settled issue, as opponents take their cases to court or politicians change their minds.

In Chicago, a bag ban was reversed after retailers skirted it by offering thicker, supposedly reusable plastic bags that were not subject to the ban. Now the city imposes a 7-cent tax on plastic bags.

The fee would cut down on litter, he said. Supporters cite a University College Dublin paper reporting that plastic bag use dropped 90 percent in Ireland after a bag tax went into effect. The tax also made a difference in the visible effect of litter, the paper said.

A Washington Post investigation of a 5-cent bag fee in the District of Columbia found that the fee had raised millions of dollars for a river cleanup fund, which in part paid to trap trash floating in the river. But data were inconclusive about whether people were actually using fewer bags.

The Los Angeles Times reported a reduction in the volume of plastic bags collected on the state’s beaches after California’s statewide ban. The bags made up 7.4 percent of trash items collected by volunteers in 2010 before the ban, and 3.1 percent in 2017.

Broadly, a small fee gets consumers thinking about the impact of all the plastic they use, the Sierra Club’s Corbin said. A plastic bag may cost just a few cents, but “the social costs are much greater.”

Festersen said that both fees and bans have worked to reduce the waste stream in other communities, although he said the details matter. In general, he said, bans are simple and clear while fees and incentives often are most effective in reducing the amount of waste because they help drive behavior.

Either way, he said, education can go a long way in helping people understand the benefits of using reusable bags instead of paper or plastic.

Festersen also noted that an estimated 280 million plastic bags are used in the Omaha metro area each year.

“Addressing plastic bags and encouraging alternatives is the right thing to do for the environment,” he said. “And locally it would help reduce our waste stream and litter in our parks, streams, sewers and trees.”

If the City Council moves forward with either a tax or a ban, it should structure the ordinance carefully and consider any trade-offs and unintended consequences, said Chris Stratman, executive director of Keep Omaha Beautiful, which mobilizes volunteers to clean up litter.

Taxing plastic bags alone may push more people to choose the paper option — bags that are more energy-intensive to manufacture, he said. Omaha could consider following cities that require paper bags to have a minimum amount of recycled content, or that enact plastic bag bans accompanied by a fee on paper bags.

Stratman cited a Tulane Environmental Law Journal article that said that charging for all types of carryout bags leads to large reductions in bag consumption, while still providing shoppers with options.

Whatever direction the city goes, he said, bag regulations are just one part of a multilayered approach to fighting litter and environmental contamination. That’s something most people support, he said.

“It becomes, unfortunately, politicized, versus trying to come up with a solution,” Stratman said.

Did you ever stop to think about how many plastic bags you get each year from the grocery store, convenience stores and take-out joints?

No where in this discussion have I seen any mention of the recycling program available at most local grocery stores for their plastic bags. My husband and I have been recycling our plastic bags for years (from ALL stores) at our local HyVee...never placing them in the trash. Also, with lidded receptacles soon available for trash/recycling, maybe there won't be so much trash of all kinds blowing around the neighborhoods!

Good for you. I recycle too, but most people don't. Rules are made for people that don't give much thought to the matter. Ban plastic bags outright and get it over with. The Canadians seem to get along just fine without plastic bags.

My wife and I have been walking more to help to improve our health. We have made it a point to look at the various types of litter on the sides of the street. The most prevalent are cigarette butts, empty cigarette packs, single use plastic liquor bottles and fast food drink containers including from Starbucks. We did not see very many floating plastic grocery store bags. I would recommend others including the city council members get out of their cars and do the same. It may provide a view of the city from a different perspective.

Try walking or driving toward Elk City and Douglas County landfill or toward the Butler County landfill that takes lots of Omaha's garbage. I think you'll see plenty of plastic bags.

I re-use the plastic bags a LOT!! I use them to collect trash in the car, trash cans at home, packing stuff up - I could never use paper bags for these things, and would just end up buying "store bought" plastic bags for the ones that I am re-using now. I don't see why banning them is the answer......