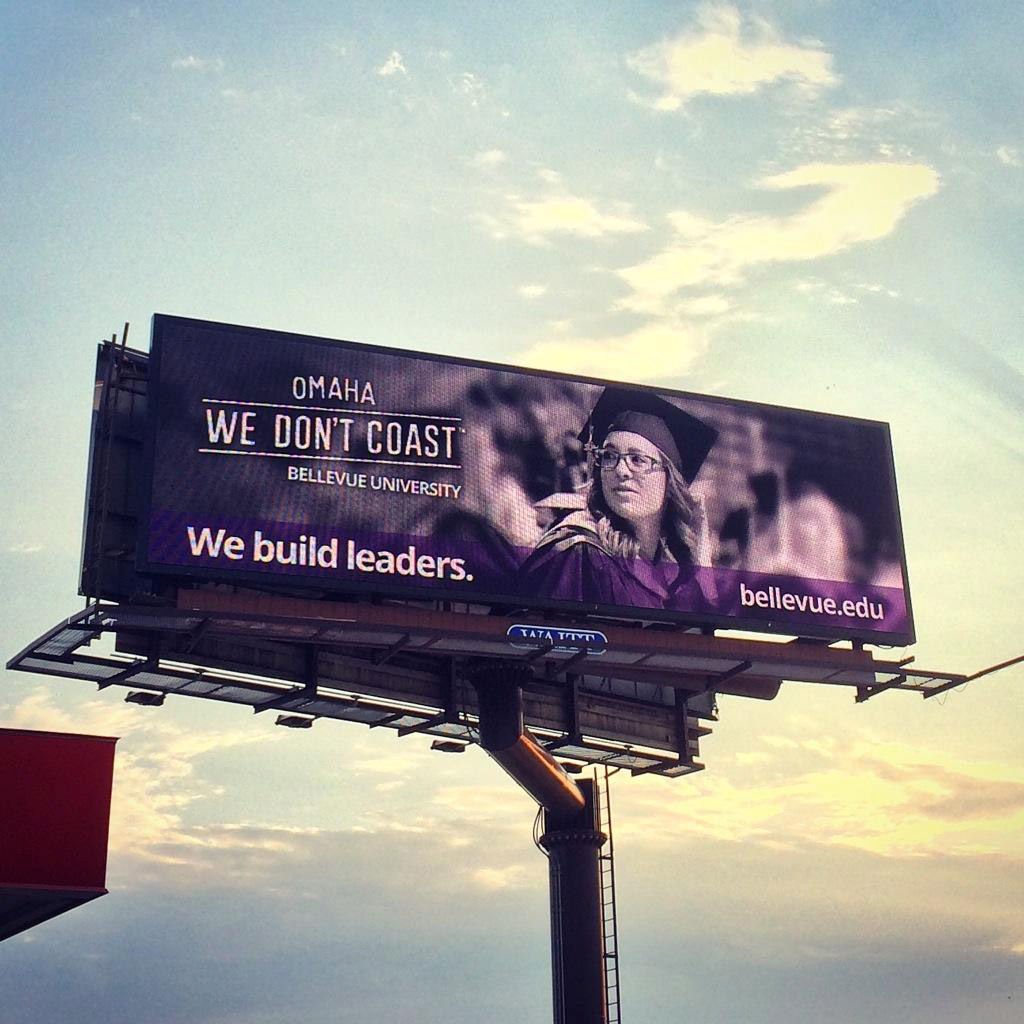 The Greater Omaha Chamber of Commerce's "We Don't Coast" slogan was unveiled earlier this summer. 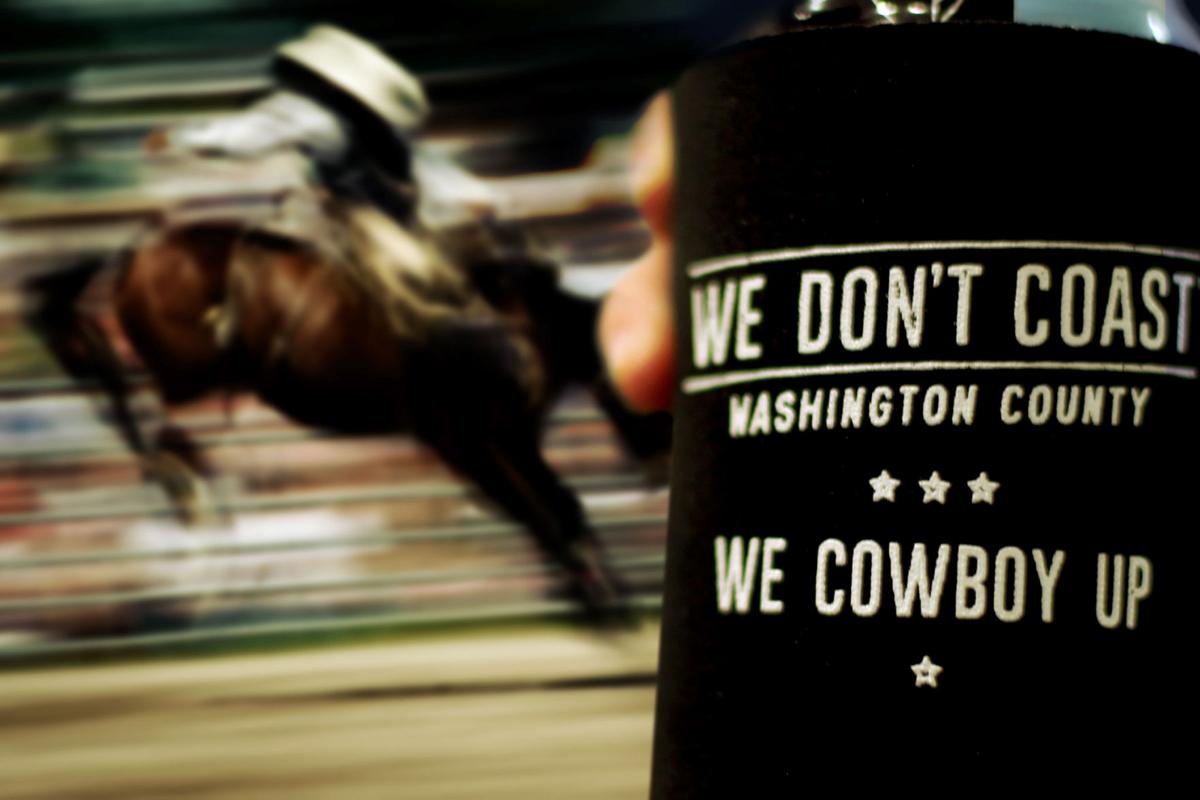 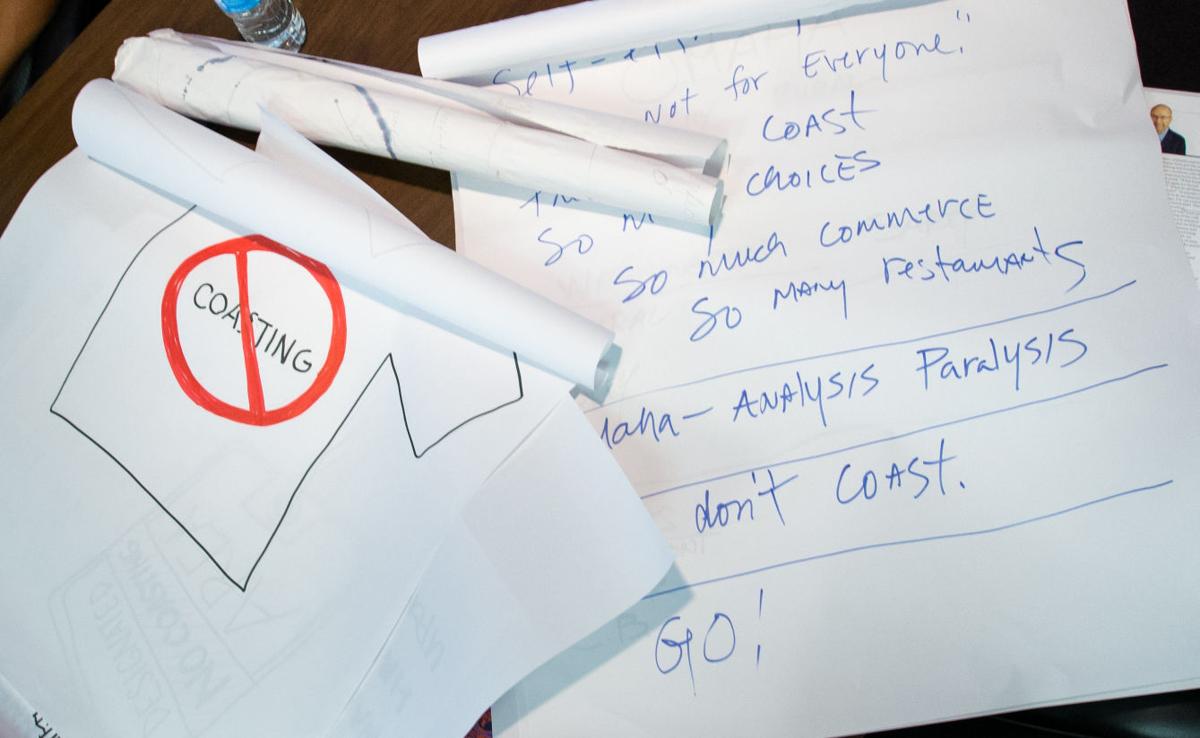 While tossing around ideas, the creative team kept coming back to a sketch of the encircled word “coasting” slashed by a red line. Yet the group balked at offering “We Don’t Coast” for consideration as a slogan. 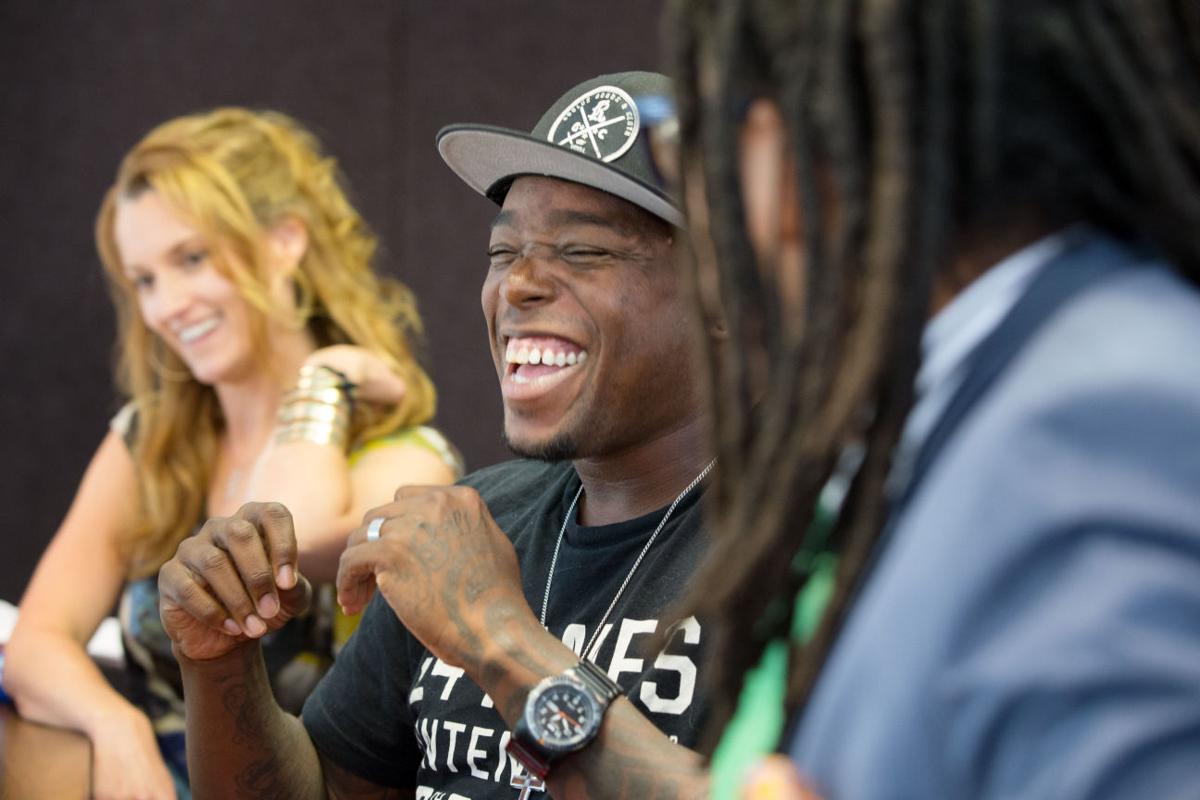 The chamber’s creative director, Kim Sellmeyer, left, with team members Steve Gordon and Jason Fischer, persuaded the creative team to go for it. 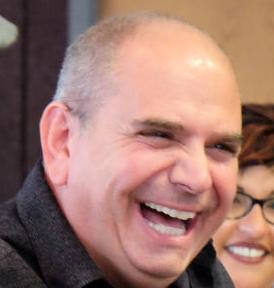 “It’s too cool. Nobody believed it would get that far," said Ed Salem of Swanson Russell.

Members of the team that came up with the “We Don’t Coast” slogan for the Greater Omaha Chamber of Commerce are shown with Kim Sellmeyer, the chamber’s creative director, back right. From left are Michael Johnson of Bozell; Ed Salem, Swanson Russell; Esther Mejia, E Creative; Steve Gordon, RDQLUS Creative; and Jason Fischer, Surreal Media Lab. Companies, agencies and communities will be encouraged to incorporate and personalize the tag line in their own promotions, something Washington Count has already done.

The Greater Omaha Chamber of Commerce's "We Don't Coast" slogan was unveiled earlier this summer.

While tossing around ideas, the creative team kept coming back to a sketch of the encircled word “coasting” slashed by a red line. Yet the group balked at offering “We Don’t Coast” for consideration as a slogan.

The chamber’s creative director, Kim Sellmeyer, left, with team members Steve Gordon and Jason Fischer, persuaded the creative team to go for it.

It’s a feisty punch line expected to turbocharge Omaha’s image. But it almost never came to be, at least not in an official way.

Indeed, the 16 creative minds that zeroed in on “We Don’t Coast” as the metro area’s new brand statement had second thoughts about presenting it to higher-ups at the Greater Omaha Chamber of Commerce.

They worried their No. 1 pick (out of countless contenders) had too much edge, and might be watered down to death if turned over to corporate suits.

“It’s too cool,” said Ed Salem of Swanson Russell, one of the writers, producers and artists. “Nobody believed it would get that far.”

As it turned out, final decision-makers were wowed, and at a Wednesday pep rally-type event they offered a peek at how the no-coasting theme will be used in a $6 million image-boosting campaign to better recruit business, jobs and talent to the six-county area.

Among the nearly 400 people attending the brand unveiling at Embassy Suites in La Vista were mayors, corporate leaders and many of the 160-plus people who so far have spent more than 3,000 cumulative hours developing the foundation of a campaign set to unfold over five years.

To start, chamber officials in the next several months will push billboards, media advertisements and social media to promote the slogan regionally. Chamber websites and marketing materials will be redone to reflect the new brand campaign.

Then chamber officials will broaden the campaign to a national level by, for example, sending business recruiting teams to other states armed with videos and gimmicks touting the brand and all that the Omaha area has to offer.

Companies, agencies and communities, meanwhile, will be encouraged to incorporate and personalize the tag line in their own promotions. Some already have started.

Take Washington County, which sported on rodeo paraphernalia: We Don’t Coast, We Cowboy Up.

Bags at a farmers market quipped: We Don’t Coast, We grow.

The idea, creative task force members said, is for the phrase to take on a life of its own.

So catchy and loaded with attitude is the statement, Gordon said, that task force members had envisioned Omahans personalizing it and spreading the brand like wildfire. Gordon himself on his way to a party recently tweeted: “We Don’t Coast, We Boogie.”

Chamber officials plan to use the slogan on cups, koozies, smartphone covers and other items.

At Wednesday’s event, T-shirts circulated with the upward slanting “We Don’t Coast.” The attached tag, in part, read: “Here you earn everything you get. There is no standstill. No off switch. Only momentum, fueled by a drive to let go and do what we love ...”

Perhaps the closest the chamber had to a slogan of late was O!, said chamber President David Brown, but that was mostly recognized locally. “There really hasn’t been a brand out there that this replaces,” he said.

Kim Sellmeyer, the chamber’s creative director, said she knows of no other city that has undergone as extensive a process to come up with a core component of a branding campaign. Omaha’s essentially started about two years ago when a consultant told the chamber it needed to do a better job of marketing the area.

The $23 million Prosper Omaha campaign has earmarked $6 million to do that. Through a competitive application process, the chamber hired the 16 creative task force members, and assembled a marketing group as a “gut check” to review the creative team’s choices, Sellmeyer said.

Also having a say were stakeholders, including business leaders and elected officials from the area’s six counties.

In April, the creative task force met at the downtown chamber. Away from that spot, they are competitors. There, the unifying force was a desire to not let Omaha down, said Esther Mejia of E Creative.

For two days, the 16 pored over surveys, interviews and other legwork already done. They split into small groups, tossed around ideas and tear sheets, improved one another’s concepts.

They kept coming back to a sketch of the encircled word “coasting” slashed by a red line.

Yet when it came time to pitch four favorite slogans to a chamber committee, the creative team balked at offering the “We Don’t Coast” contender.

They thought it was not corporate or conservative enough for chamber types, and considered saving it for an underground campaign of sorts, emblazoning T-shirts and other items with the sassy no-coasting symbol.

With Sellmeyer’s persuasion, though, “We Don’t Coast” was presented along with three other slogans. She said there were audible gasps of approval.

Brown said the statement took him aback and quickly evoked a double meaning — hard-working people and unapologetic pride for the landlocked Midwestern Omaha.

“We want people to pause and say, ‘That’s not what I expected from Omaha. So what am I missing?’ ”

Furthermore, when Brown learned that the creative task force thought the no-coasting concept would be too edgy for the chamber folks, “We realized we were where we need to be.”

The phrase was trademarked. The chamber bought a URL for a website, which will morph into a recruiting tool.

As word of the chamber’s new Omaha brand leaked out, critics also chimed in. Some didn’t like the negative slant. Others wondered what it meant.

The beauty, said Michael Johnson of Bozell, is that “We Don’t Coast” should take on a different and personal twist for each individual and business, as is the case with Nike’s “Just Do It.”

To Jason Fischer of Surreal Media Lab, a Washington, D.C., native, “We Don’t Coast” is about “owning” the city in which he chose to live, meshed with a “roll-up-your-sleeves attitude.”

To Mejia, it’s about a central Nebraska girl’s personal journey that led happily to Omaha, despite early thoughts she should go to a big city to flourish. “I have everything here,” she said, including business mentors, community leaders, family, career.

Said Gordon, a north Omaha native who has lived elsewhere: “It’s a very much stand-up-and-pound-your-chest moment — I’m from the Midwest, any questions?”

An underlying and central message, all agreed, is to step up your game.

“Good is not good enough,” Johnson said. “Things can always be improved.”

Mayor David Black of Papillion expects the new brand campaign to draw more outside interest to the region. He said businesses are impressed when an area has regional cooperation, as reflected in the campaign development.

“But once you come here, I’m going to fight as hard as I can to bring you to Papillion,” he said.

Kenneth West, a principal at DLR Group, said he was a bit skeptical when he first heard the slogan, but after listening Wednesday to how it will be tailored to the 30 communities, “it grew on me.”

He thinks it will grab outsiders’ attention and, when they take a second look at the region, they might better relate to the tenacity of a region that he said persevered better than most during the recession.

Barry Cleaveland, director of research and development for SilverStone Group, thinks Omaha will be the topic of a lot of flattery. “We’re very competitive already. We should see an uptick at least in people looking at us.”

The chamber plans an August event to reveal details of how it will use the phrase.

Bluffs official: 'We Don't Coast' is 'something we can work with'

» Seen on a University of Nebraska at Omaha electronic billboard: We Don’t Coast ... We fuel this city

» Social media teased the Bellevue air show: We Don’t Coast, We Support our Troops. (Anyone feel like going Mach 1 this weekend?)

» A Blair storefront tailored a message after a hailstorm: We Don’t Coast, We Rebuild

» A promotion by Nelson Murphy insurance and investments reads: We Don’t Coast, We simplify financial planning

» A Pottawattamie County billboard, with cyclists in background, says: We Don’t Coast, We Ride

» On a Nebraska wine bottle: We Don’t Coast, We Toast

» Designed for a teacher ad: We Don’t Coast, We Inspire

» An Iowa Western promo touting its baseball team: We Don’t Coast, We Boast

» A chamber economic development ad: We Don’t Coast, We Build

As new retailers and fast-casual restaurants pop up, more growth is anticipated.

If you 'don't coast,' you can win contest

The Omaha Chamber of Commerce isn't coasting as it uses social media to recruit laid-off Microsoft workers and other tech professionals at a Seattle convention.