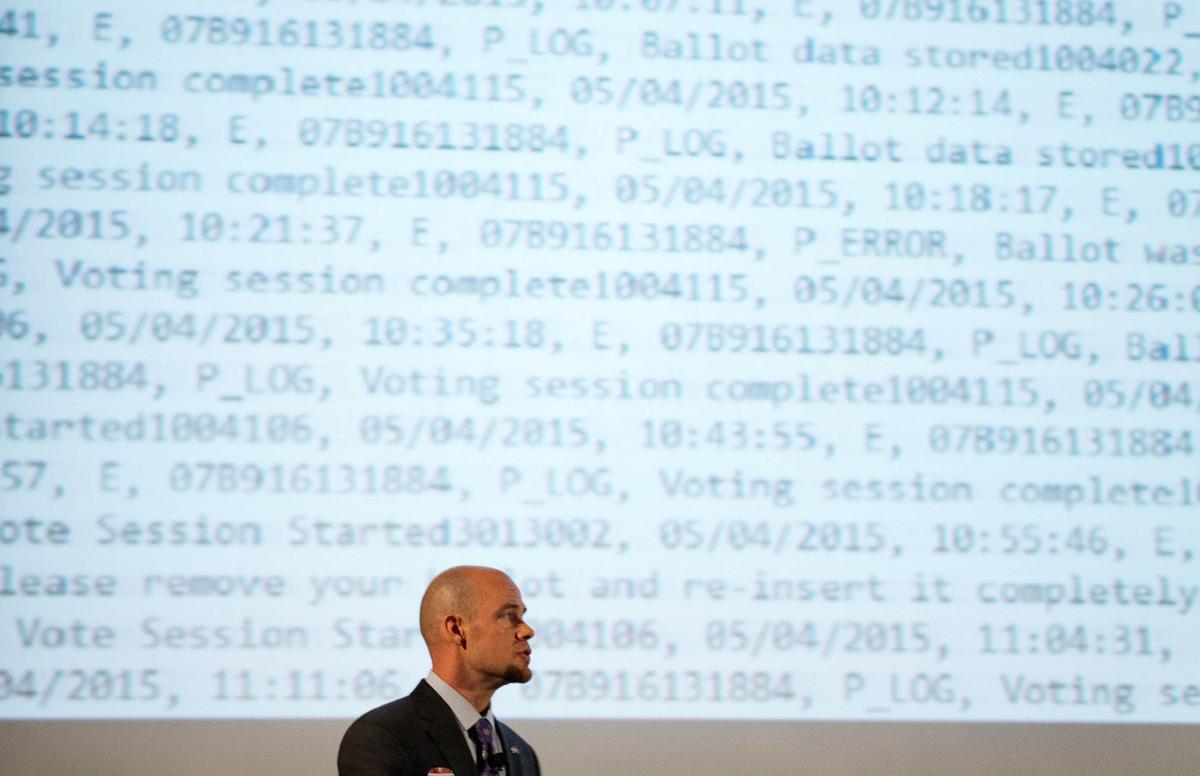 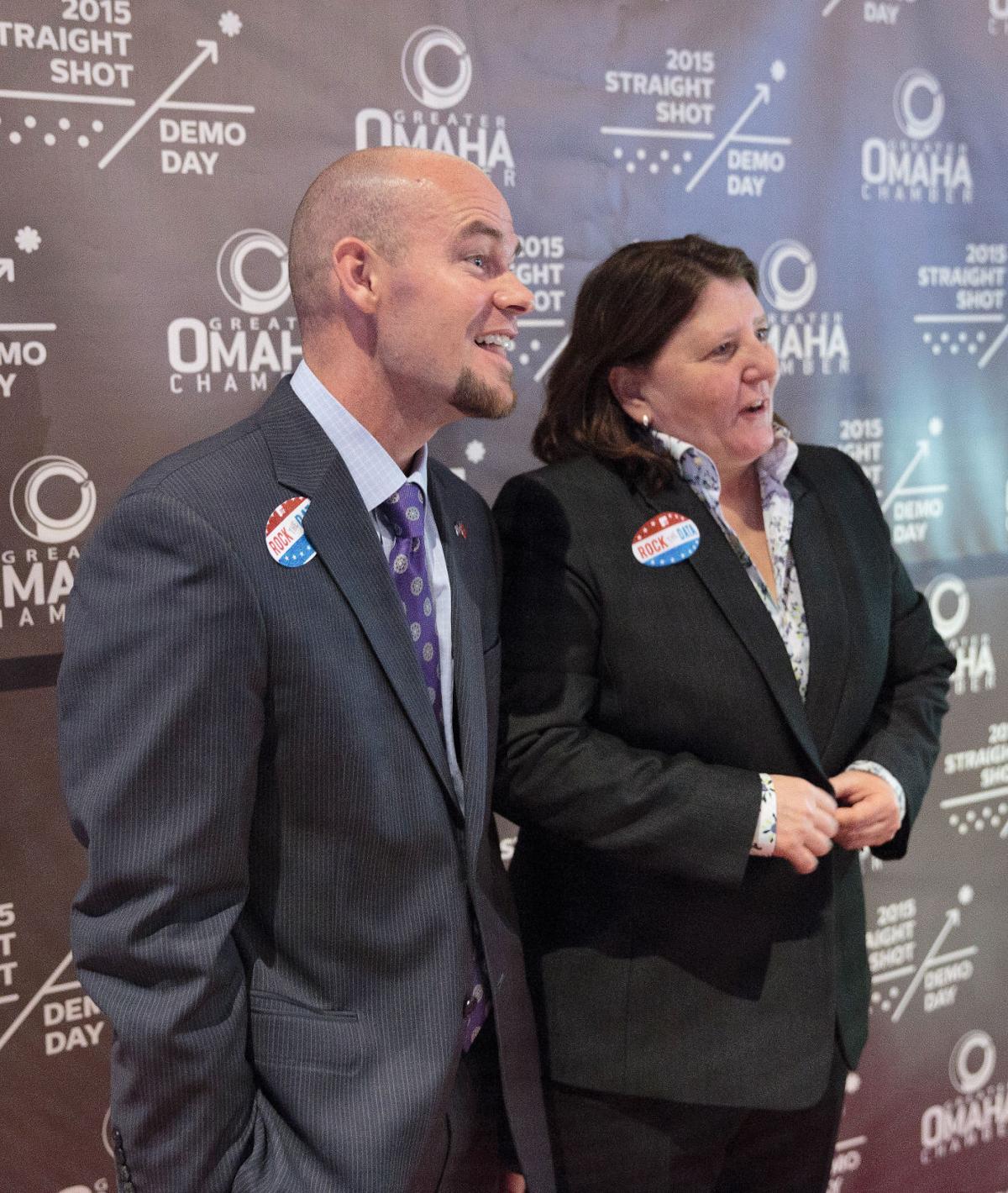 Rob Wiebusch and Shari Little, of Omaha's Election Systems & Software, get ready for Demo Day as part of the Straight Shot accelerator program at Aksarben Cinema in Omaha.

Rob Wiebusch and Shari Little, of Omaha's Election Systems & Software, get ready for Demo Day as part of the Straight Shot accelerator program at Aksarben Cinema in Omaha.

It can be hard in a big company for a small idea to get the attention it deserves. Sometimes, perhaps the big company should think like a startup.

That’s what Omaha-based Election Systems & Software did: carved out a small team and sent its members to startup school to develop an idea that could make voting a better process throughout the United States and beyond.

ES&S Director of Emerging Technologies Rob Wiebusch and Director of Innovations Shari Little last week finished a three-month stint at the Straight Shot Accelerator, where they refined their early concept at improving voting. They want to use data to help election administrators make smarter decisions at polling places.

Omaha’s ES&S makes electronic voting machines used around the world. Even though it’s the world’s leading provider of voting equipment and election support services, the company’s management said a startup mindset is what ES&S needs to maintain its lead in the business.

So ES&S sent Wiebusch and Little to the 90-day startup accelerator program in June to come up with the nuts and bolts of a new product offering that will aim to make voters’ experiences at the polls go more smoothly.

With their machines at so many polling places, ES&S collects a lot of data. This project doesn’t use personal information, such as whom a voter chooses for City Council. Instead, it looks at data generated from a polling place as a whole — like how many people voted between 8 and 9 a.m. Or how many times ballots were fed incorrectly into machines.

Armed with that data, election administrators could, say, bulk up staffing during typically busy times or increase training for employees having problems with certain tasks. (The company says the data is non-identifying — in other words, it’s not tied to information that would expose individual identities or votes.)

Wiebusch presented the “public-facing” version of the pitch to an audience of about 400 late last week at Aksarben Cinema for Straight Shot’s Demo Day, a capstone to the program. A fuller pitch was made to ES&S leadership and stakeholders on Monday.

Not wanting to tip his hand to the competition, Wiebusch broadly described the idea as such: “We are going to improve election operations for our customers by unlocking insights in the data that already exists.”

Election expert Doug Chapin said being able to identify differences between the behavior of voters who come early in the day compared with those who come later in the day could be a key piece of data.

“Given there are other aspects of the day we can’t predict, like the weather, I think being able to predict how many voters will come in based on historic data and having the resources to prepare for how they will vote ... will help election officials do more advance planning and then free them up to deal with truly unforeseen circumstances,” said Chapin, who is director of the Election Academy at the University of Minnesota’s Humphrey School of Public Affairs.

“It’s less about how someone will vote and more about what they do when they vote,” he said.

Election Insights, as the product is known, will be rolled out over the next two to five years, Wiebusch said.

David Arnold, managing director of Straight Shot, said there’s plenty of room for the Omaha accelerator program to grow its role as an incubator for corporate innovation in addition to its focus on helping early-stage companies get off the ground.

Typically, participants have spent 90 days honing a product or service. Mentors, who are local and national business leaders, work with the companies to overcome development hurdles or to change gears and head in different directions, if necessary.

Previous participants have included HuntForce, a photo management software company that works with trail cameras used by hunters and wildlife management officials. Another is Viirt, a software service that gives homeowners estimates for roof replacements and connects them with low-cost, certified roofing companies.

ES&S was one of seven participants in this year’s cohort; 14 other startups have participated in the previous two cohorts.

Other participants in the 2015 class:

» Noivox, a business communications service that lets clients communicate with customers via text messaging instead of by phone.

» Bric, a software platform that helps professional services companies such as ad agencies manage things like workloads and budgeting.

» Assortify, a software platform for retailers to better manage their product assortments and pricing.

» WorkHound, a communication platform for trucking companies that aims to help reduce the industry’s rate of driver turnover.

Arnold said he wants to use momentum from Straight Shot’s first-ever corporate participant to attract even more mature companies into the program.

“We see big opportunity in this corporate innovation space and in partnerships with existing corporations to be more entrepreneurial.”

Once companies complete the program they are provided with $20,000 in seed funding and have access to interns from Creighton University in addition to the mentors they worked with during the 90-day term.

Angel investors fund the investment capital that goes to participants, and sponsorships cover the for-profit program’s operating costs. Those angel investors receive a 6 percent equity stake in participating startups in exchange for their investments

Straight Shot did not contribute seed capital to ES&S, nor did it receive an equity stake in the company. The financial arrangements for future corporate participants haven’t been ironed out, Straight Shot said.

A peek at the résumés of the most recent class hints that Straight Shot’s timing could be good. Other participants in the most recent cohort included former executives from companies like ACI Worldwide, Proxibid, Hayneedle and PayPal.

“These people approach the ‘startup life’ in a different sense than someone who thinks it’s cool to wear jeans to work and not have to clock in,” Arnold said. “That’s a trend we hope takes hold because we can’t rely on the person that’s fresh out of college to get us to the next level.”

ES&S’s Little and Wiebusch said they learned a lot in the Straight Shot program about new product development — especially since they were working side by side with their startup counterparts for the duration of the program.

The two had access to Straight Shot’s mentors and other resources.

“We were very pleased with the outcome, not only with respect to the product that was developed but with the lessons we learned in the startup environment,” Wiebusch said.

This year's Straight Shot Accelerator class has plenty of experience

This year’s class of seven companies picked to participate in the 90-day Straight Shot Accelerator is chock-full with technology and startup business veterans.

A spokesman said Elections Systems & Software was chosen because it met every requirement the secretary of state's office sought.

Applications are now open for Omaha's Straight Shot accelerator for entrepreneurs, and this …

If you’re wondering if Omaha’s code schools can take you from fledgling hacker to a hirable Web developer in 12 short weeks, the answer is yes.

Tom Burt, president and chief executive, said the decision was made to allow for spending on customer-service areas of the business, such as technicians that service voting machines. No positions involving direct customer interaction were eliminated.