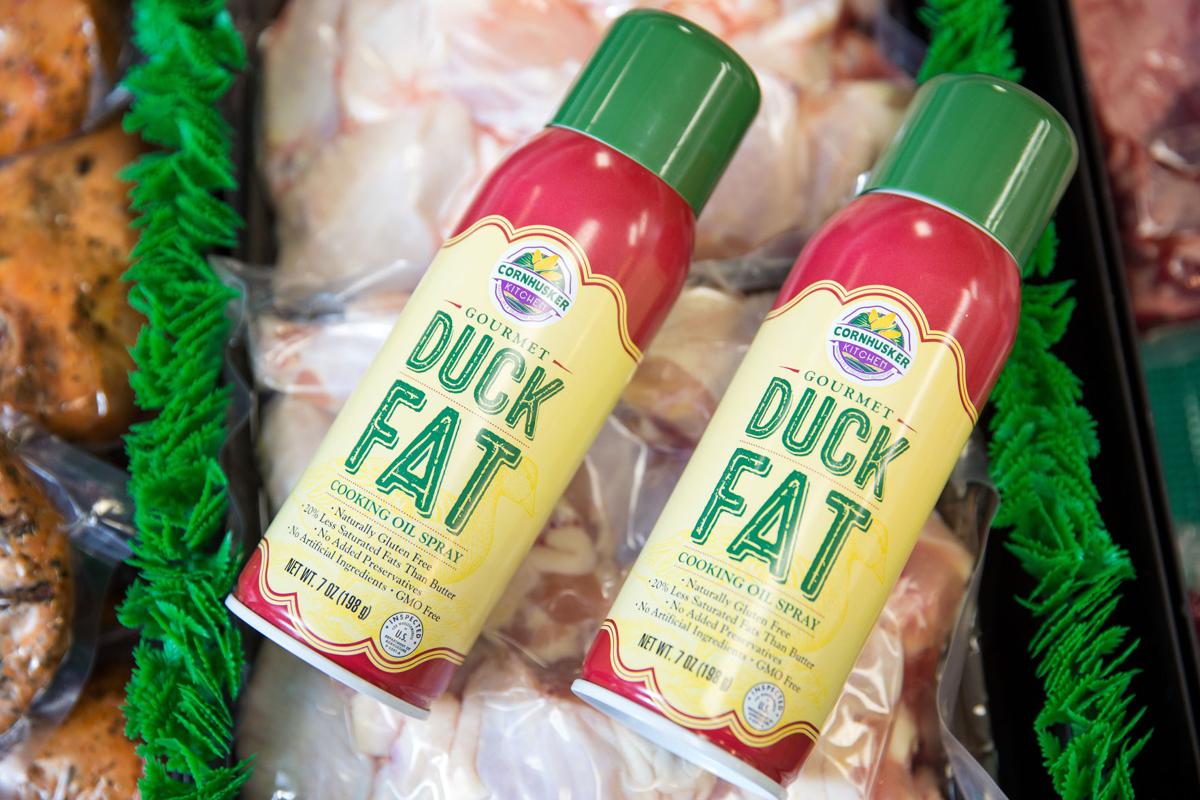 Duck Fat cooking oil spray is displayed Wednesday at Just Good Meat at 84th and J Streets. The cooking spray has been on the market since fall 2016. 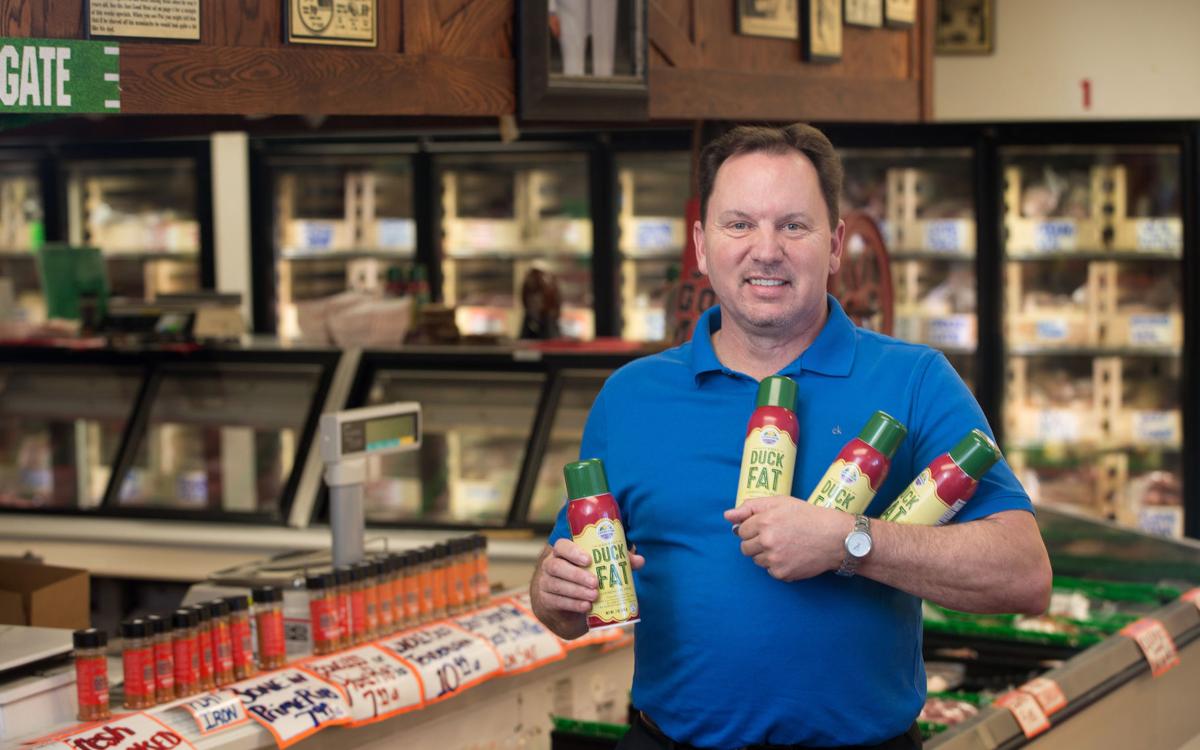 Dennis Schuett, the inventor of Cornhusker Kitchen's Duck Fat cooking oil spray, stands with cans of the spray at Just Good Meat in Omaha on Wednesday. Hundreds of cans have been sold since the product was rolled out last fall. 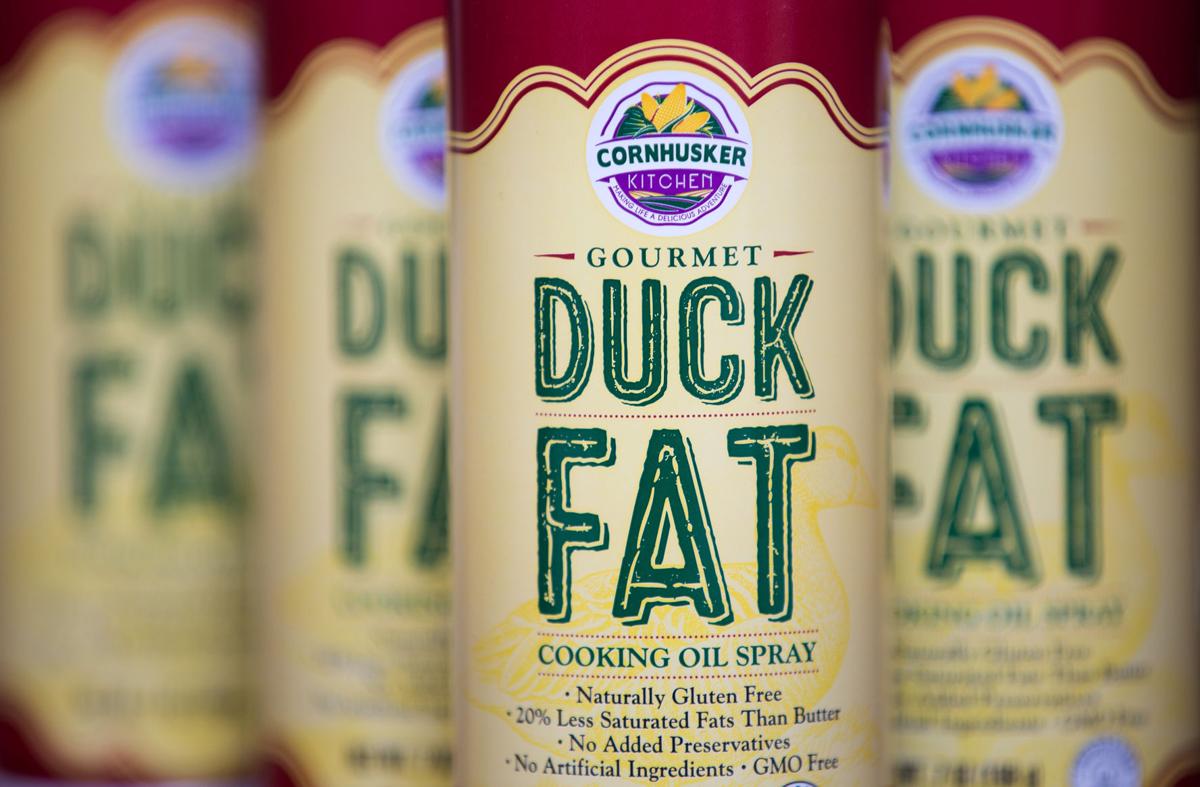 Duck Fat cooking oil spray available for purchase at Just Good Meat in Omaha. Sean Fuller, the owner of Just Good Meat, said the oil is the fastest-selling local product he's ever sold in the grocery part of the store. 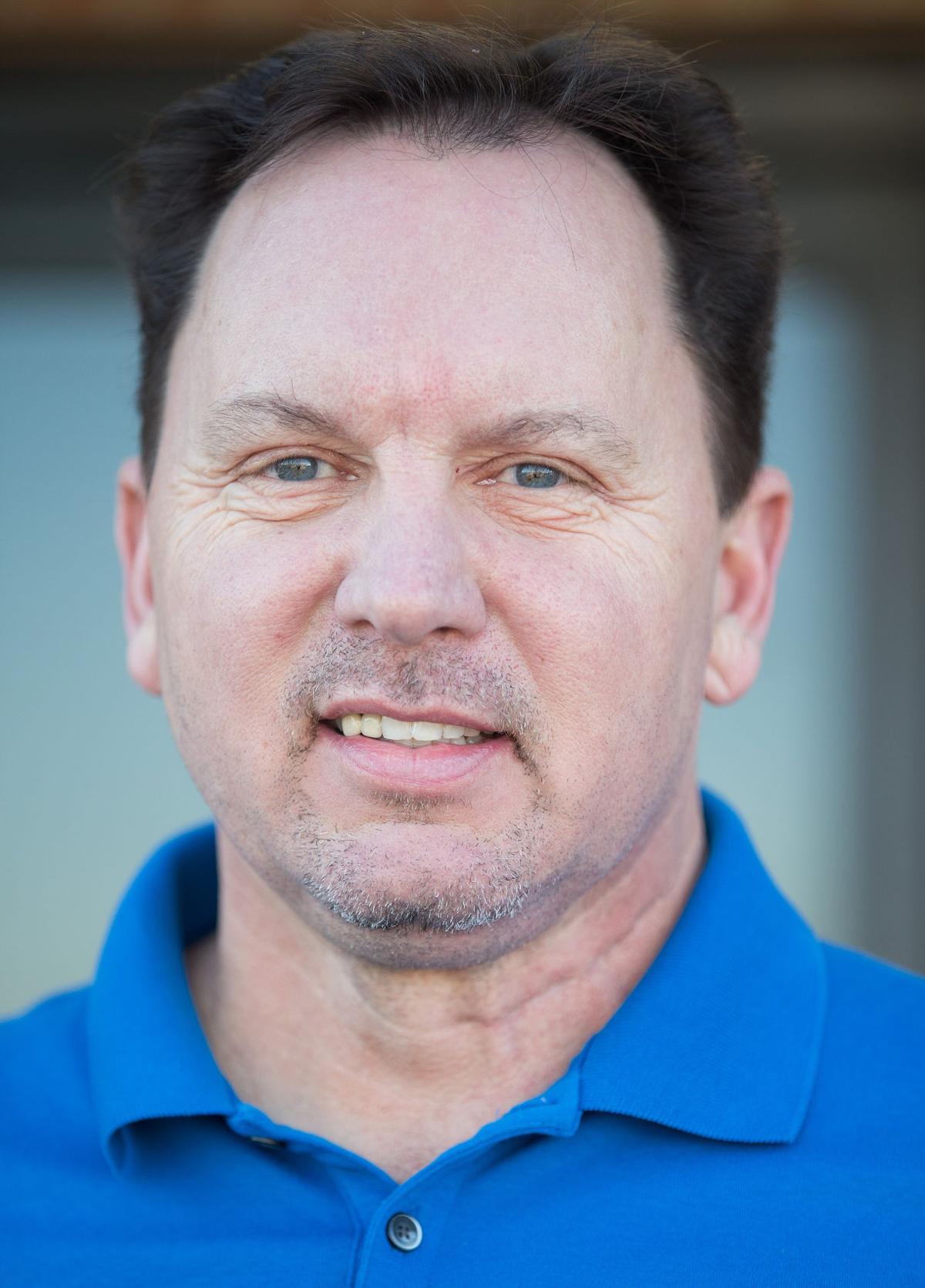 Dennis Schuett, the inventor of Cornhusker Kitchen's Duck Fat cooking oil spray, says his duck fat product is the only one that comes in a can. 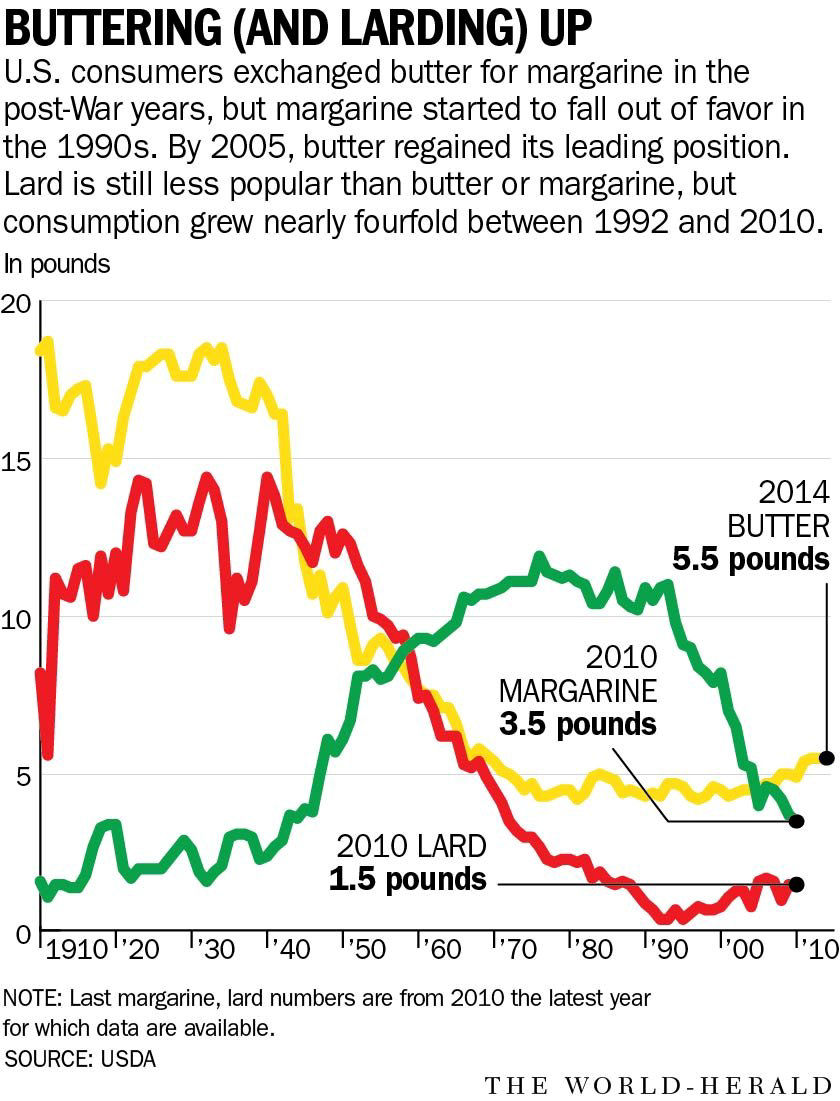 Duck Fat cooking oil spray is displayed Wednesday at Just Good Meat at 84th and J Streets. The cooking spray has been on the market since fall 2016.

Dennis Schuett, the inventor of Cornhusker Kitchen's Duck Fat cooking oil spray, stands with cans of the spray at Just Good Meat in Omaha on Wednesday. Hundreds of cans have been sold since the product was rolled out last fall.

Duck Fat cooking oil spray available for purchase at Just Good Meat in Omaha. Sean Fuller, the owner of Just Good Meat, said the oil is the fastest-selling local product he's ever sold in the grocery part of the store.

Dennis Schuett, the inventor of Cornhusker Kitchen's Duck Fat cooking oil spray, says his duck fat product is the only one that comes in a can.

A customer checking out Wednesday at Just Good Meat in Ralston got a sales pitch from one of the shop’s butchers.

“This stuff?” the butcher said at the cash register, rattling a spray can labeled Duck Fat. “If you’ve never used it? Awesome.”

“You use it kind of like Pam,” the butcher said, likening an Omaha entrepreneur’s new duck fat product to the ubiquitous cooking spray sold by Conagra Brands.

Conagra measures sales of Pam in the tens of millions of cans a year. Duck Fat spray inventor Dennis Schuett has sold hundreds of cans of his product since he introduced it in the fall.

But he’s hoping it earns a spot in the pantry of home cooks who are looking for another option, one he said holds up to searing heat better than vegetable oils, and that enhances the flavor of foods like potatoes and steaks. It sells for $12.99 a can online and $10 a can at Just Good Meat; other retailers’ prices may vary.

The launch of the unusual spray comes as chefs and consumers, especially those who follow paleo and whole-foods diets, have returned to traditional animal fats like duck fat, beef tallow and pork lard.

It will compete for space on store shelves with a growing number of premium-priced fats and oils, sold for $9, $10 or more. The animal-fat products — once shunned — now are being pitched as a healthful choice. They fit in with a long-running consumer trend away from margarine and partially hydrogenated oils back to more traditional butter and animal fats.

On the ground floor of the trend was Colorado firm Fatworks, which in 2011 started selling beef fat — called tallow — and now also sells wild boar lard, duck fat, bison tallow and organic free-range chicken fat. Its products are sold online and in some Whole Foods, Natural Grocers and other retail spots.

Fatworks co-founder David Cole was following a paleo diet, but was having trouble finding the animal fats that paleo gurus recommend. He figured there was an untapped market. “We had to take a jump into the unknown,” he said. Paleo diet followers eat mainly meats, vegetables, nuts and eggs, and shun grains, dairy, sugar and refined vegetable oils.

Cole worked with farmers and suppliers to process and distribute the fats. Fatworks has a Nebraska connection — some of its duck fat is rendered at the same Norfolk food manufacturing plant that supplies Schuett’s duck fat. Fatworks sales have grown from about $50,000 in 2011, the first year, to about $1 million in 2016, he said. But he said growth has slowed lately with the launch of similar products from food giant General Mills.

The same month, Epic launched its own line of some of the same animal fats. Fatworks’ Cole isn’t happy about General Mills’ venture into the category, calling it a “copyfat” that takes advantage of its nationwide supply chain and distribution network to outpace his business. Epic told The World-Herald that its animal-fat cooking oils were a natural evolution for the company, which already used meats and hoped to source more of the “whole animal” in its products. Customers are using Epic oils to roast, bake and fry food, and even as a beard oil or skin moisturizer, the company said.

Epic says its fats — which like Fatworks’ are sourced from grass-fed, cage-free and pasture-raised animals — are more nourishing than the fat of conventionally raised animals, with more omega-3 fatty acids. That’s what consumers are looking for in a food product, Epic co-founder Taylor Collins said in an email.

Meanwhile, as these upstart fat companies advertise their products as better for you, traditional sellers of supermarket-staple fats have been overhauling their image. Crisco has eliminated partially hydrogenated oils from its vegetable shortening recipe, leaving it free of artificial trans fats, parent company J.M. Smucker said.

And Armour, the old name in meatpacking that sells lard by the tub, touts its recipe as “one of the healthiest cooking fats you can buy.” Armour uses fully hydrogenated lard, which it says does not add trans fats, and contains less saturated fat than butter and more heart-healthy monounsaturated fats.

Schuett, in Omaha, says both Epic and Fatworks are duck fat competitors, but his is the only product in a spray can, which he said is an easy and familiar way for the home cook to use duck fat to grease an omelet pan or sauté vegetables.

For his new food venture, under the umbrella name Cornhusker Kitchen, Schuett teamed up with longtime business partner Roger Brodersen, founder of Omaha agribusiness information platform DTN, which he has since sold. The two also have been owners of Jackson Street Tavern in Omaha and are partners in the Boulder Creek Amusement Park in Millard.

Schuett, formerly a food broker, said a food supplier to Boulder Creek introduced him to duck fat. Schuett liked the product and noticed it wasn’t among supermarket spray-oil offerings. He bought canning equipment and now contracts with a Kansas co-packer to produce it. Unlike most spray oils, it doesn’t contain a propellant mixed with the oil; the oil is in a bag inside the can, and compressed air surrounds the bag, forcing the oil out when you press the button.

A number of butcher shops and other specialty foods stores around Omaha are now carrying Schuett’s duck fat spray, and Hy-Vee also recently agreed to stock it in its distribution center, so individual Hy-Vees can order it, he said. Just Good Meat owner Sean Fuller said it’s the fastest-selling local product he’s ever stocked in the grocery area of his shop, at 84th and J Streets.

Can trendy, back-to-the-basics animal fats be part of a healthy diet?

As in other debates over food, the answer is: it depends. And the answer, it seems, boils down to, “in moderation.” Local nutrition consultant Terry Shanahan, whose clients include former Creighton University basketball star Doug McDermott, guides clients in a paleo diet, and recommends fats from grass-fed beef, pasture-raised pork and wild-caught fish.

Paired with other healthy choices, he said, these fats can help fight disease and result in weight loss.

“It’s encouraging people to use fat for fuel instead of using sugar and processed foods,” he said. How much to eat? That depends on the client’s goals and activity level, but he advises moderation.

“Just because it’s labeled a trendy fat or a healthy fat doesn’t mean we can have all we can eat,” she said.

Looking for lard? In Nebraska, you can skip the store and go straight to the source. A handful of Nebraska farmers sell lard directly to custo…