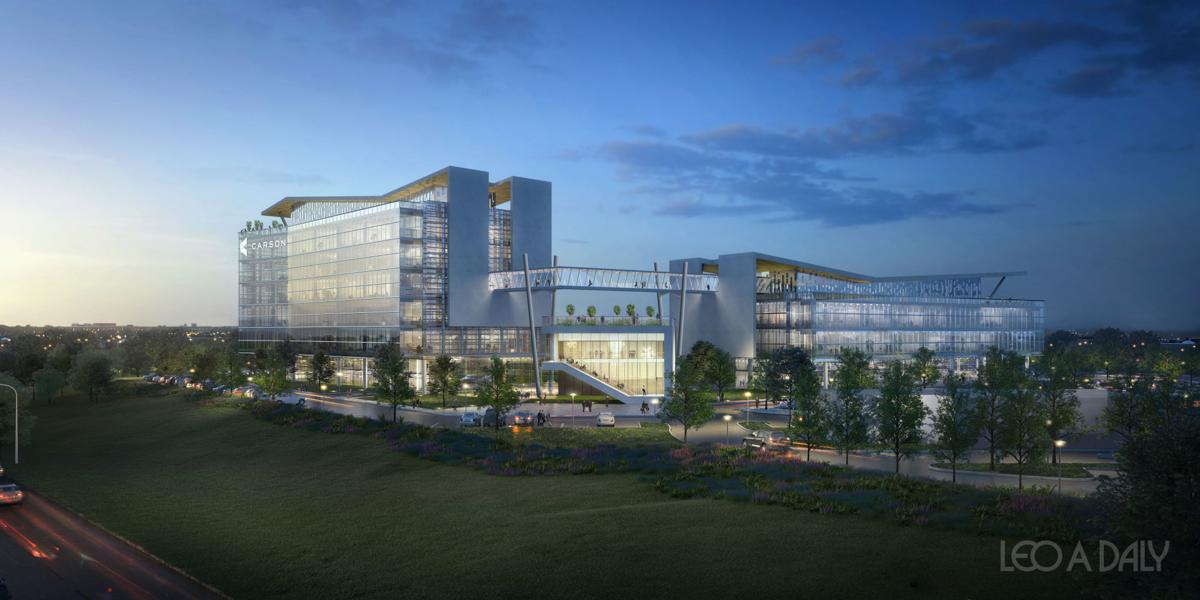 The Carson Group’s headquarters will feature Carson Commons — the two-story wing at center — a training and gathering space with a rooftop terrace. The building at right, an additional $30 million investment, will rise later. 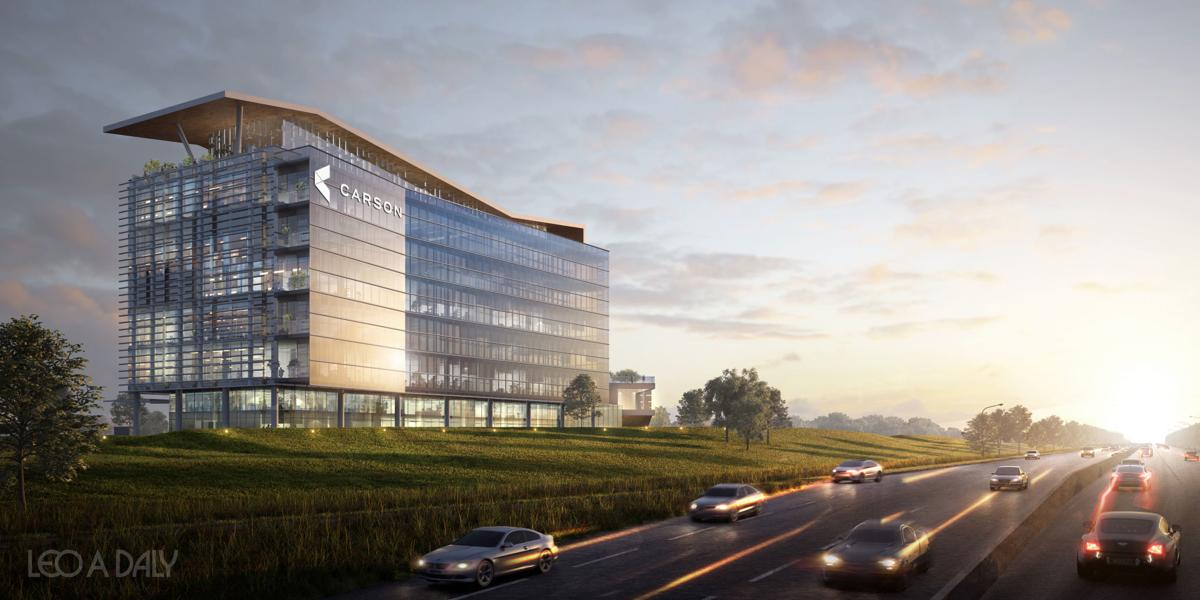 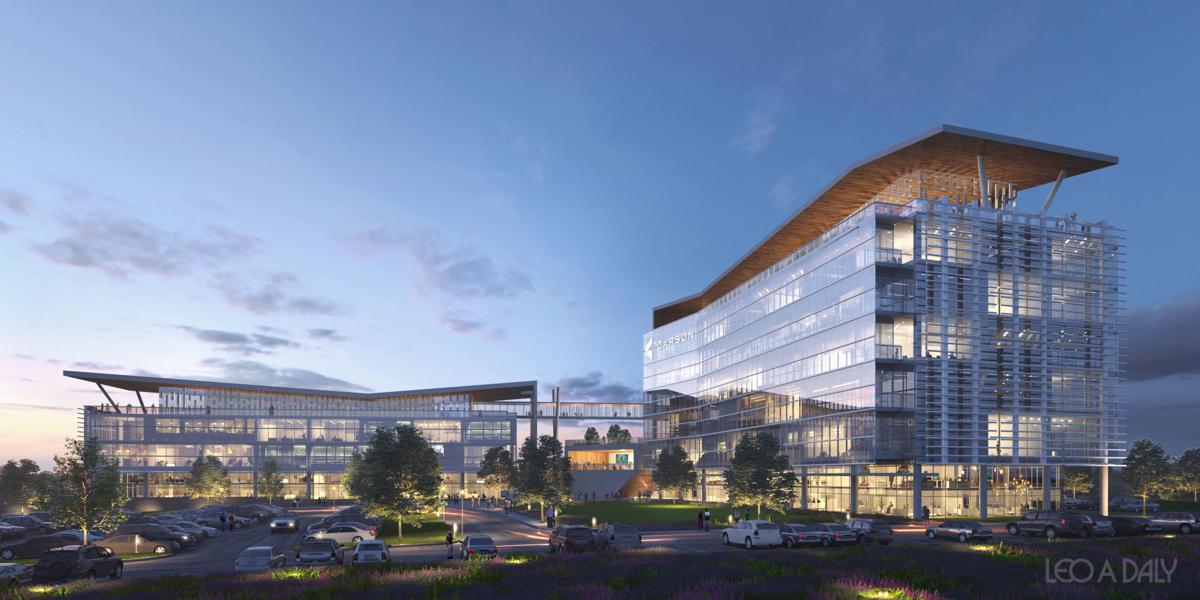 Construction of the Carson Group’s headquarters will start this summer. The six-story building on the right is expected to open by late 2020. The financial services firm aims to expand its local workforce to 300, a 50% jump, by then. 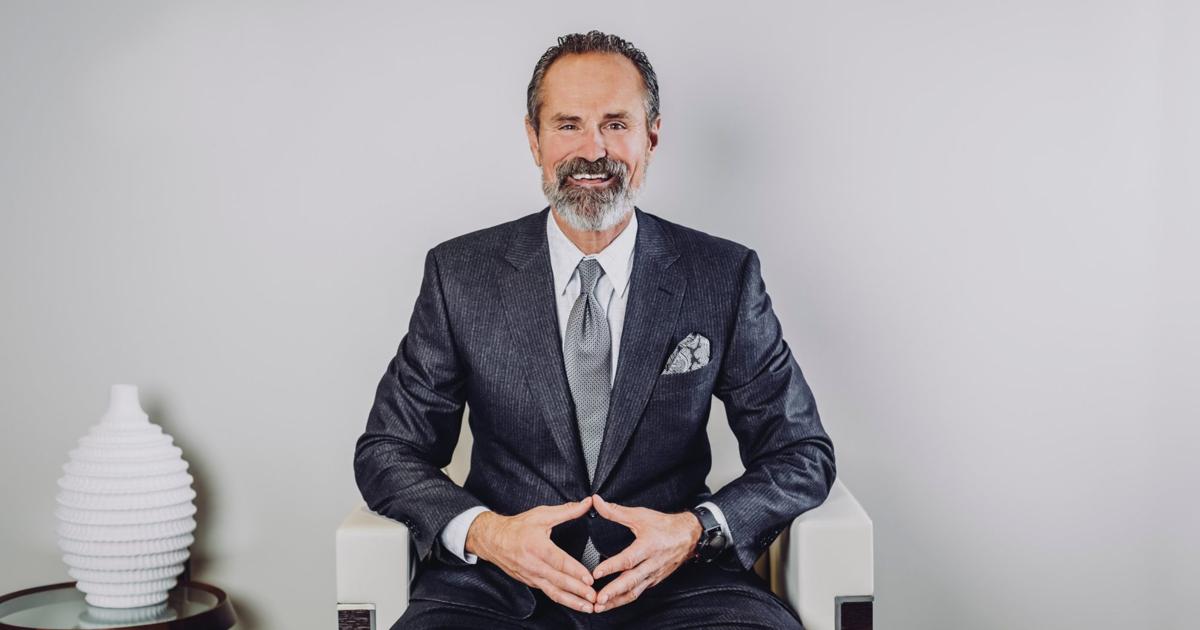 The Carson Group’s headquarters will feature Carson Commons — the two-story wing at center — a training and gathering space with a rooftop terrace. The building at right, an additional $30 million investment, will rise later.

Construction of the Carson Group’s headquarters will start this summer. The six-story building on the right is expected to open by late 2020. The financial services firm aims to expand its local workforce to 300, a 50% jump, by then.

The six-story glass facility will be a northern anchor on the broader 500-acre Heartwood Preserve redevelopment site. It will feature high-tech and social amenities the company expects will attract talent to fuel rapid growth.

A driving force behind the project — which will benefit also from the Heartwood’s planned amphitheater, trail system, shops and housing options — is a farm kid raised near Tekamah, Nebraska.

Ron Carson, 54, said he learned early on the pain of financial ruin when his family went broke farming. He said he did all he could to avoid “scarcity” again. And after an injury ended his Husker football career, he in 1983 launched a wealth management gig from his dorm room at the University of Nebraska-Lincoln.

Now in its 36th year, Carson’s enterprise this week was named again by InvestmentNews as one of the country’s top 75 places for financial advisers to work. For the past two years, Carson Group was recognized by Inc. magazine as one of the nation’s top 5,000 fastest-growing private companies.

Carson’s projection for further growth is ambitious: He intends someday to be among Omaha’s top few largest employers.

The new home at Heartwood Preserve, formerly known as West Farm, is key to that leap.

There, Carson’s team is partnering with developer Tetrad Property Group to build and co-own a 120,000-square-foot office building. Construction is to begin this summer. It will be the first of two buildings; the sibling of 80,000 square feet is to be connected by a walkway and rise in the future. That second phase is to cost roughly $30 million on top of the initial $50 million investment.

Carson said some space at first might be leased to other tenants, but eventually the founder and chief executive of the Carson Group expects to fill the entire place with training, people and services related to his wealth management and financial technology business.

The Carson Group, a sort of three-headed machine, includes Carson Wealth, Carson Partners and Carson Coaching. Its founder, who has authored books and numerous investment articles, aims to expand his local workforce to at least 300, a 50% jump, by the end of 2020, when the first building is projected to open.

“We think in 10 years, my guess is sooner than that, we’ll have 2,000 working right here in Omaha, a tenfold increase,” Carson said.

He foresees the group’s $8.6 billion of assets under management rising to about $12.5 billion by the end of this year.

Carson, who started his career advising farmers, in 1993 added the coaching division of Carson Group that today provides consulting to about 5,000 advisers in nearly 1,300 offices nationwide. In 2012, Carson launched the partner network that now totals 108 offices. Those have their own brands but tap Carson Group’s back-end support services.

The retail component includes 18 Carson Wealth offices across the country that provide financial planning and wealth management for investors.

Additional business will come, Carson said, as “rich and tired” wealth management firms lose energy to reinvest in their operations. He believes that the financial services industry is near a consolidation similar to what happened in farming and banking.

The new headquarters, which will replace existing offices at 132nd and California Streets, should help lure workers who are also being wooed by big competitors in California and New York, Carson said.

“It’s getting people to move here from other places and saying, ‘Hey, your kids can be in this building. You can work out in this building. Look at all the great shopping.’ The lifestyle (at Heartwood) will be a major attraction.”

Omaha-based Leo A Daly was chosen from multiple architectural competitors. Jonathan Fliege and Gary Ryba said their team spent a few weeks delving into the Carson culture and structure — down to meeting the “chief comfort officer,” the founder’s dog named Nelly.

From that research emerged features such as Carson Commons, a two-story training and gathering space topped with a rooftop terrace. The Commons wing opens to outside green space where the Carson “family” can host picnics, bands and events.

The building’s glass exterior is meant “to make it as light and transparent as possible,” Fliege said.

Jay Noddle of Noddle Cos., which oversees development efforts at the broader Heartwood site, called the Carson project a great fit. He said two other “major” office projects are close to announcement as well. Applied Underwriters is the corporate anchor on Heartwood’s southern side near Pacific Street.

Zach Wiegert, principal of Tetrad and Goldenrod Capital Partners, both part of the development team, said he looks forward to the new Carson home setting the pace for surrounding development and job growth.

“We are confident their new headquarters will provide an ideal platform to attract, retain and inspire its world-class employees,” he said.

An eight-story apartment building proposed for Omaha’s Dundee area would add a few hundred more housing units and further change the face of a midtown stretch of busy Dodge Street.