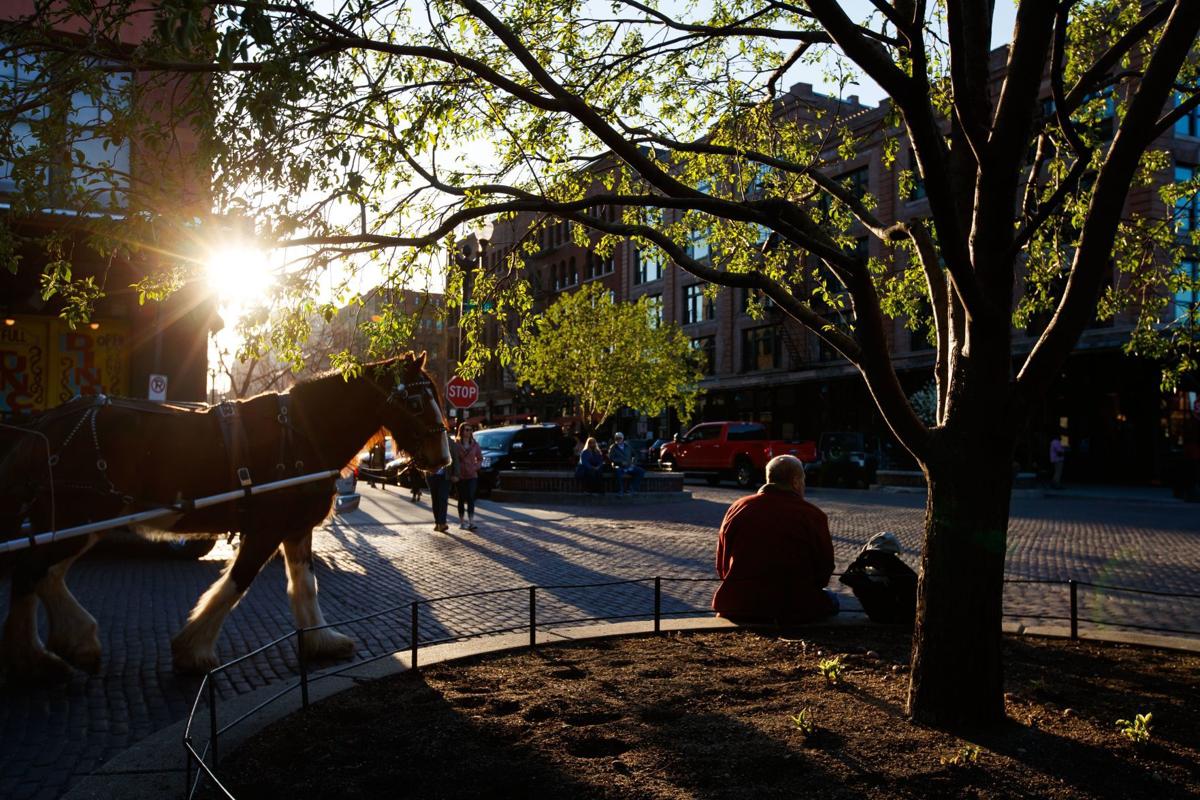 A horse pulling a carriage walks through the Old Market, one of Omaha’s top tourist attractions. 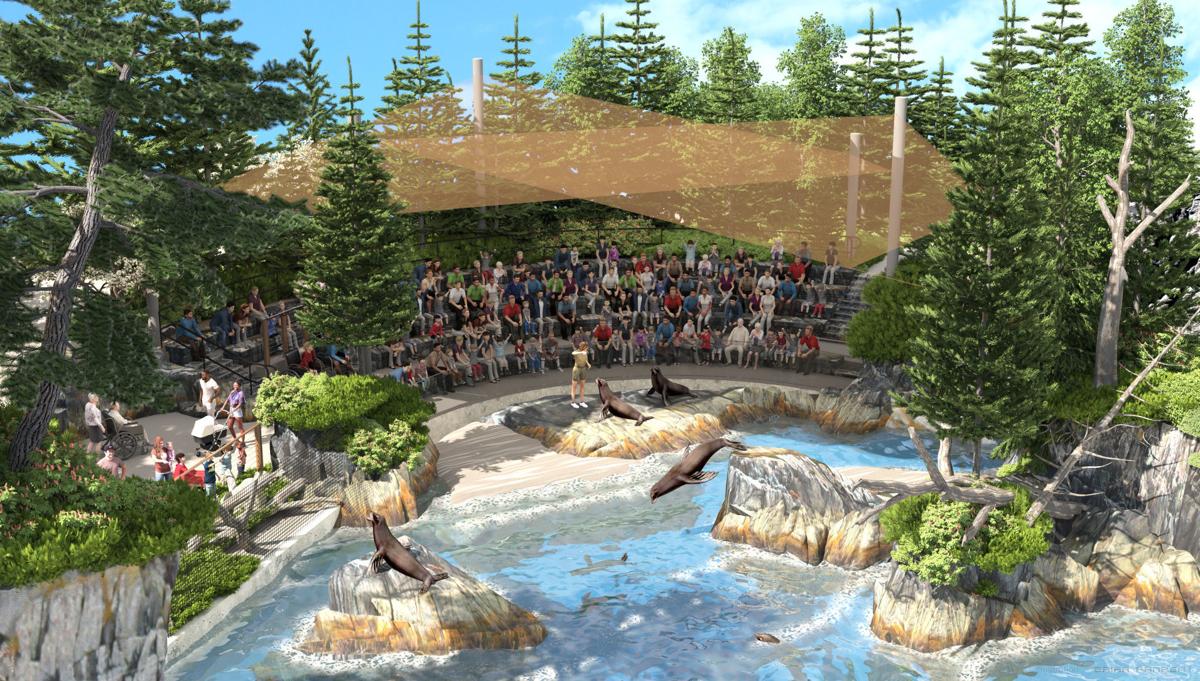 This rendering shows an amphitheater for sea lion training that will seat 170 at Owen Sea Lion Shores, which is slated to open next summer. 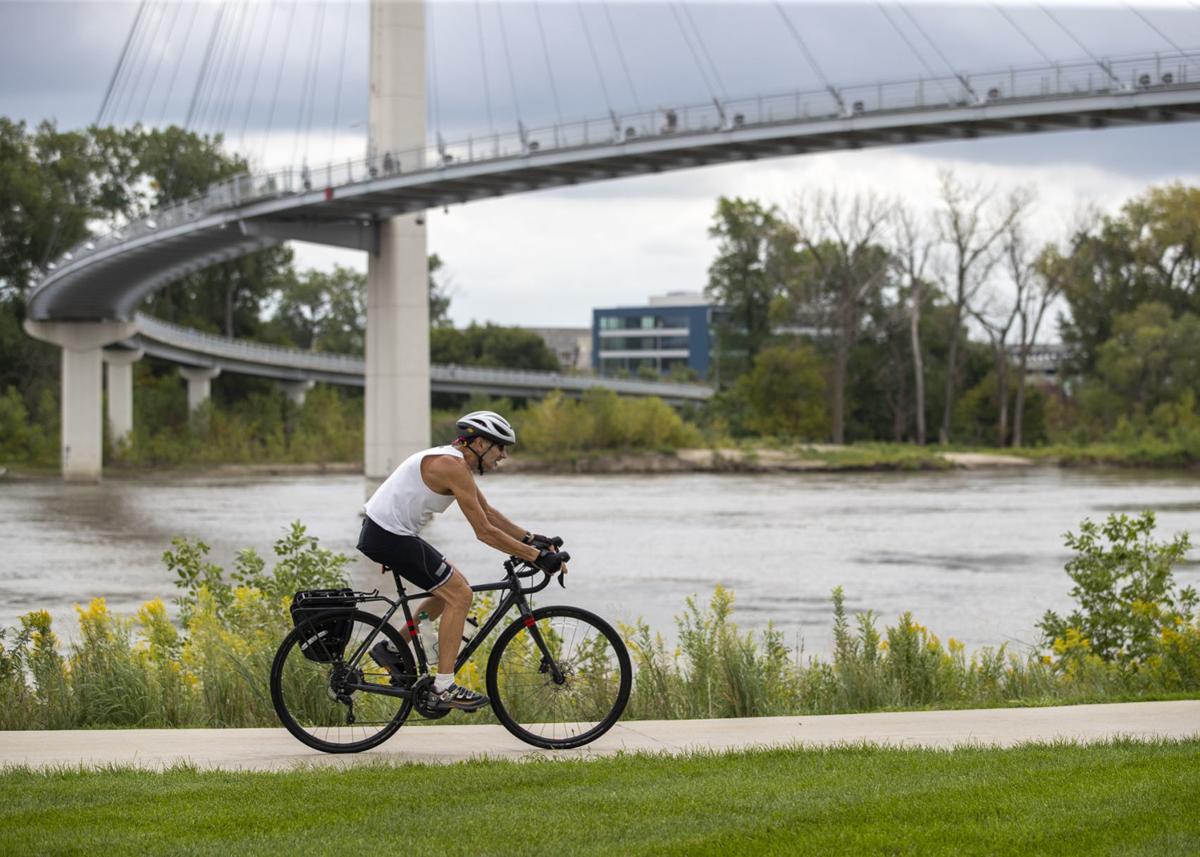 A bicyclist rides along the Missouri River near the Bob Kerrey Pedestrian Bridge, which is a popular spot for tourists. 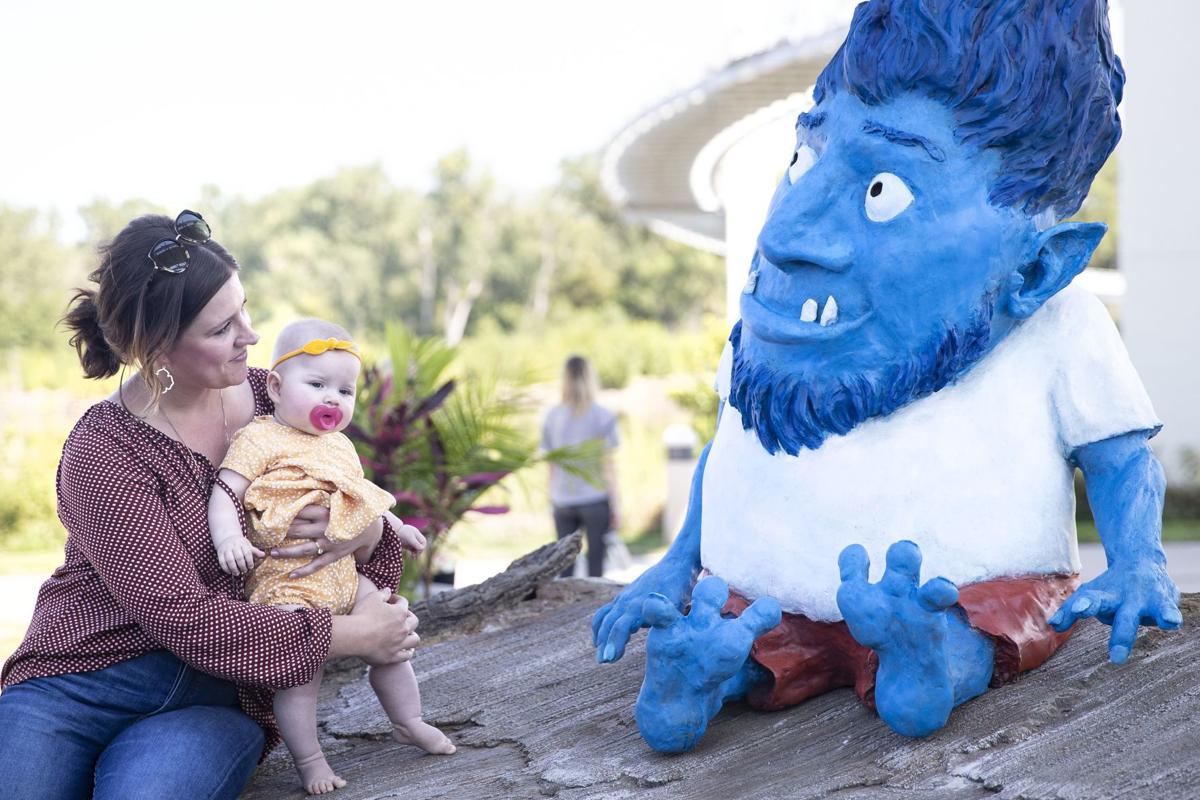 Heather Garth and her daughter Willa explore Omar the troll under the Bob Kerrey Pedestrian Bridge. 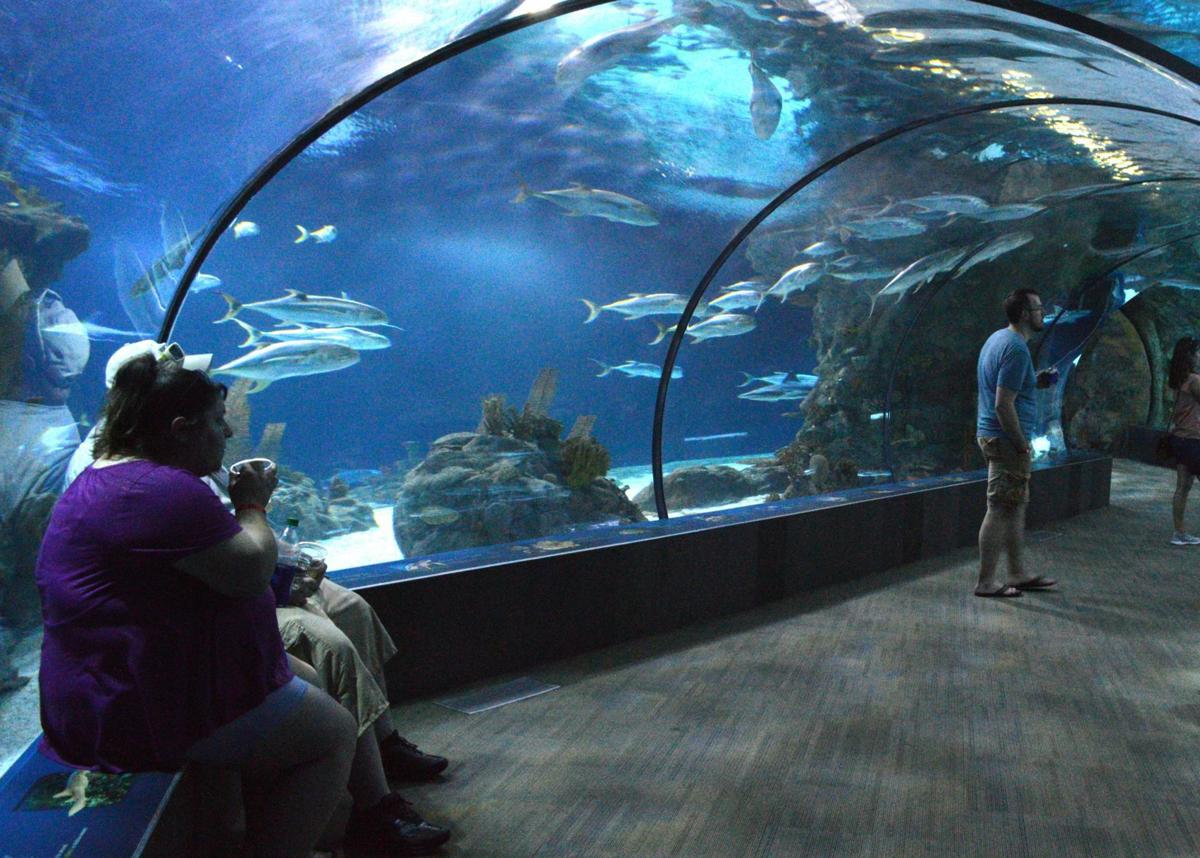 Lindsay and Matt Mcgraw sit in the shark tunnel at the Henry Doorly Zoo & Aquarium, the top destination for tourists in Omaha.

A horse pulling a carriage walks through the Old Market, one of Omaha’s top tourist attractions.

This rendering shows an amphitheater for sea lion training that will seat 170 at Owen Sea Lion Shores, which is slated to open next summer.

A bicyclist rides along the Missouri River near the Bob Kerrey Pedestrian Bridge, which is a popular spot for tourists.

Heather Garth and her daughter Willa explore Omar the troll under the Bob Kerrey Pedestrian Bridge.

Lindsay and Matt Mcgraw sit in the shark tunnel at the Henry Doorly Zoo & Aquarium, the top destination for tourists in Omaha.

The number of out-of-town folks checking out the Omaha scene has climbed for the ninth year in a row, and the dollars travelers spend also is on the rise.

A study done by Tourism Economics for the local convention and visitor’s bureau shows the visitor count in 2018 topping 13 million.

That’s an annual growth of 3.5%, which is faster than the average 1.9% growth of the last five years. Included in the numbers are guests coming for business meetings, conventions, sporting events, leisure travel and visits to family.

While here, the tourists spent $1.3 billion, marking 4.3% growth over the previous year and also outpacing the five-year 2.8% average.

Deborah Ward, a spokeswoman for Visit Omaha, the local convention and visitors bureau, said the analysis by the Oxford Economics company covers Douglas County and was gleaned from hotels, airline, gas tax and other 2018 information.

She sees the findings as a testament to how the Omaha area has grown and developed its fun side.

“I credit that growth to the caliber of the experience you now have,” Ward said. “The quality of our live performances, the quality of our attractions. ... Living here, we kind of take those things for granted.”

She noted ongoing work to improve tourist magnets, including a combined $1.3 billion going into the airport and downtown riverfront area, and the zoo’s $27.5 million sea lion exhibit set to open next year.

Tourism is important to local residents, Ward said, for reasons including the jobs it creates and dollars it saves households.

Consider these other highlights from the report released Monday:

2019 arrivals and departures from the Omaha zoo

After assessing Daisy's quality of life with a severe degenerative joint disease, the decision to humanely euthanize her was made by the zoo's animal health team, the zoo announced.

Marshall the Indian rhinoceros calf made his public debut at the Omaha Henry Doorly Zoo & Aquarium on Tuesday.

Snow leopards are listed as vulnerable by the International Union for Conservation of Nature’s Red List, according to a release from the zoo.

Marina, a 21-year-old white rhino, was humanely euthanized Monday after the discovery of an inoperable colonic obstruction, zoo officials said in a statement.

Omaha can now get a look at the king penguin chicks that were born at the Henry Doorly Zoo and Aquarium in mid-March.

The baby gorilla is being hand-raised by keepers due to breastfeeding issues with the mother, 15-year-old, first-time mother Bambio.

The aquarium will remain open through the work, which will include a redesigned facade, added  lighting, and an expanded and improved Sea Turtle Cafe.

Baby gorilla to be unveiled Friday at Henry Doorly Zoo

The female western lowland gorilla is the first baby of 15-year-old Bambio.

Callee the elephant is 'the best bull we could've gotten for our girls,' Omaha zoo director says

Callee's arrival brings the number of African elephants at the zoo to seven.

Zoe Raber, who had brain cancer, took a stuffed baby giraffe to every surgery and every MRI.

It's a girl! There's a brand-new baby giraffe at the Omaha zoo

Early on the morning of April 16, a female giraffe was born to 19-year-old mother Dottie at the zoo. Zookeepers already notice she’s more curious than other giraffe calves and likes to look around her exhibit and lick her keepers.

Bam Bam was euthanized Tuesday evening after it was discovered that she had untreatable liver cancer.

A 300-pound troll is moving in under the Bob Kerrey Bridge, but it won't stop you from crossing

Omar, a 300-pound, blue troll statue with a big personality, comes by way of Visit Omaha. The troll has been in the works for three years.

I wonder how many caught a bus provide by their Omaha destination to go across the river to the casinos. Maybe this reporter an delve into these stats and see if that was calculated.

And of course this extra money from outside the State must be why our taxes are so low and our infrastructure the envy of the world /s/.

I had the same thought. The casinos are a big draw for visitors to Omaha......

Nice try at a make yourself feel good story. If we are getting so much savings, why do my property tax continue to increase yearly?