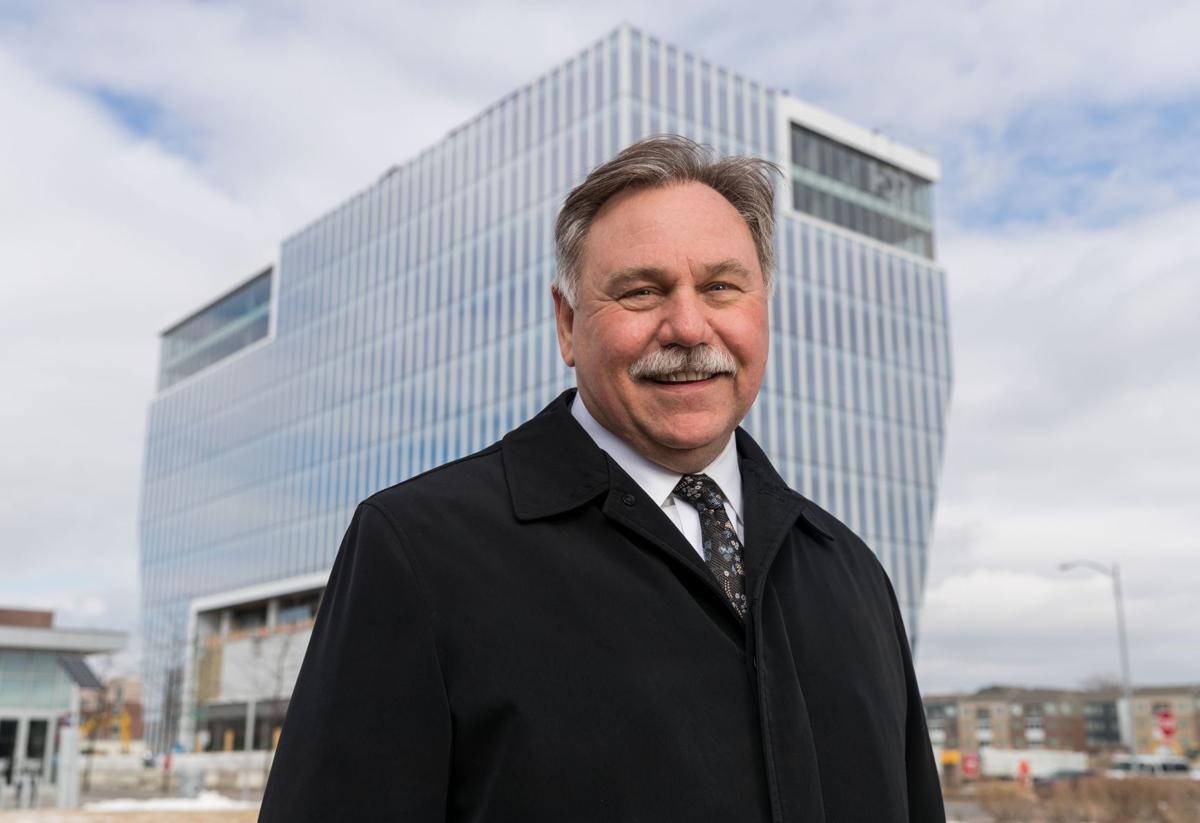 CEO Eric Keen in front of the HDR headquarters going up at Aksarben Village. 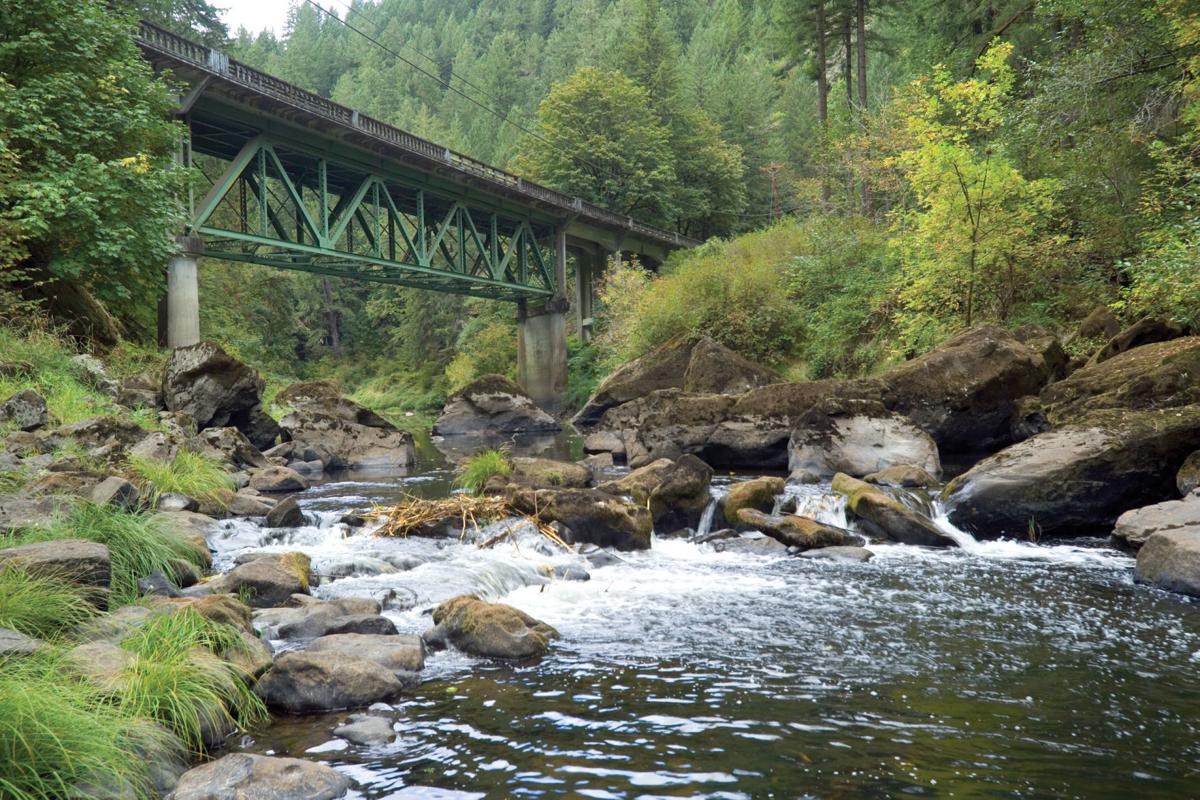 One of CEO Eric Keen's HDR projects includes this bridge in Oregon. 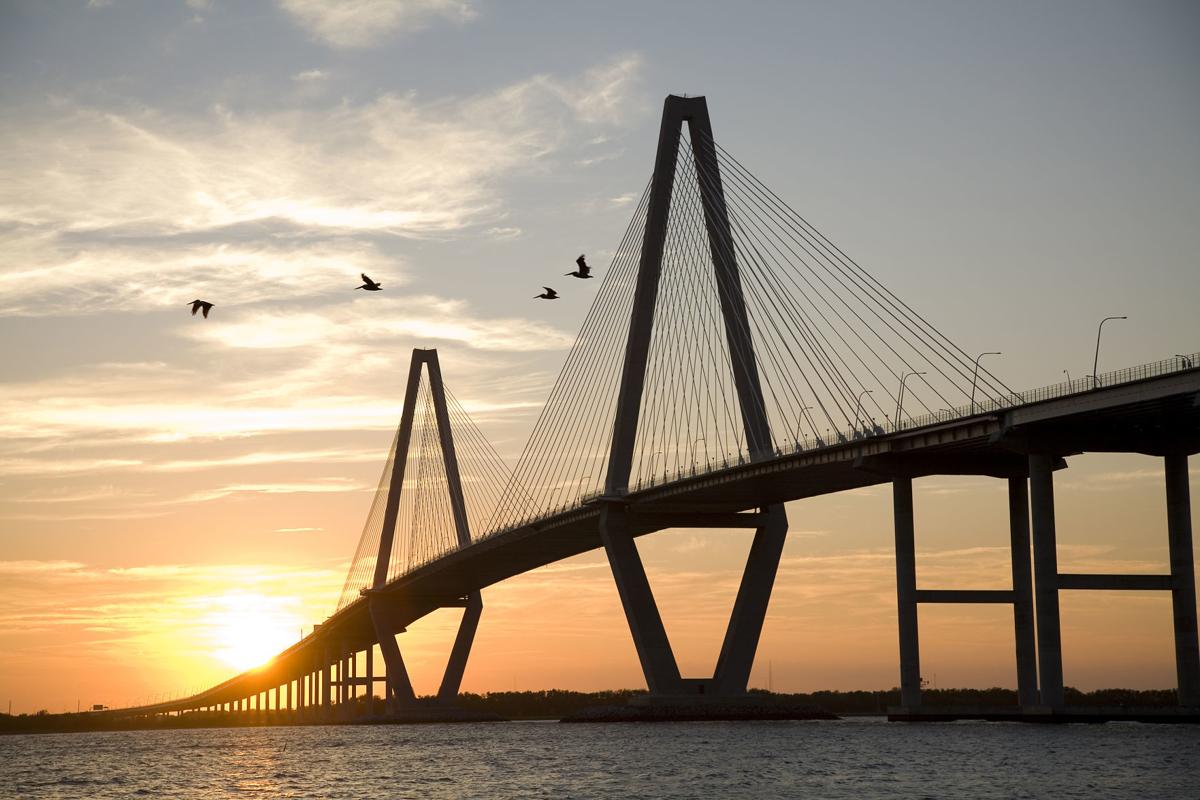 One of CEO Eric Keen's HDR projects is the Ravenel Bridge in South Carolina. 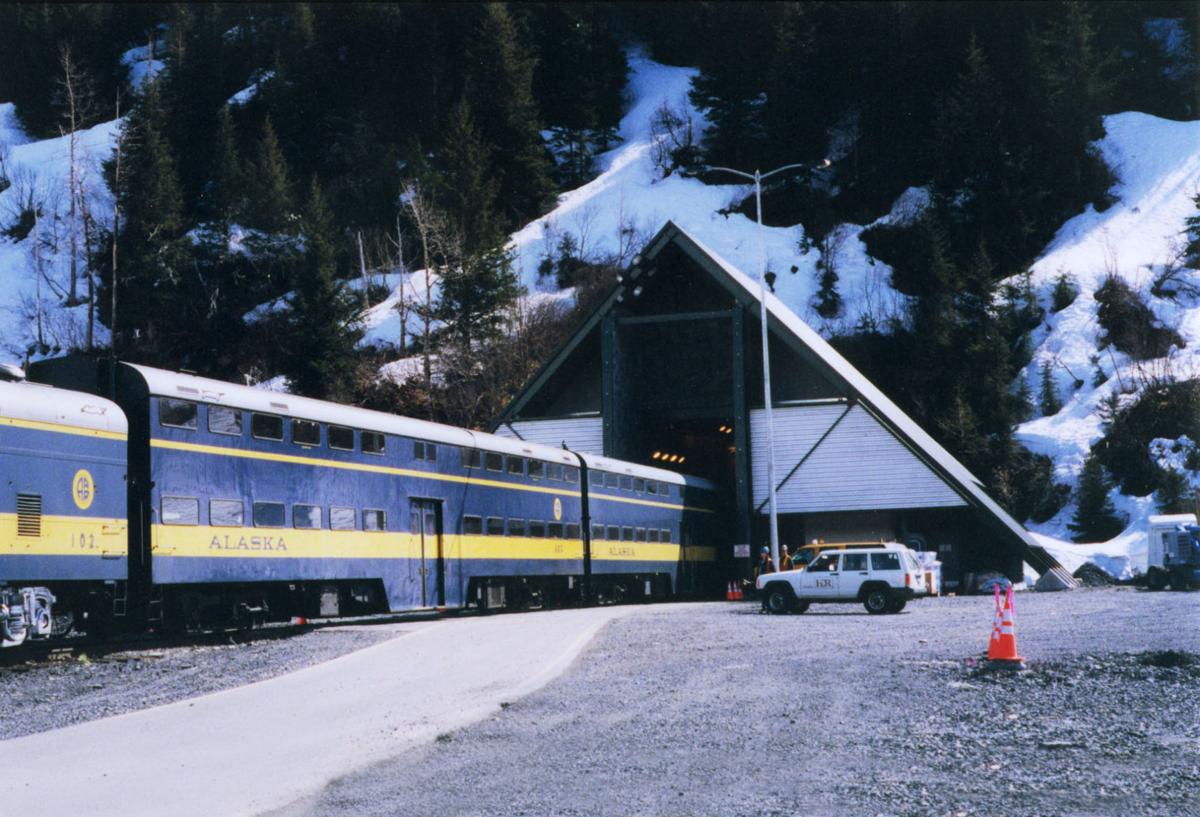 One of CEO Eric Keen's HDR projects is the Whittier Tunnel, which is shared by cars and trains in Alaska.

CEO Eric Keen in front of the HDR headquarters going up at Aksarben Village.

One of CEO Eric Keen's HDR projects includes this bridge in Oregon.

One of CEO Eric Keen's HDR projects is the Ravenel Bridge in South Carolina.

One of CEO Eric Keen's HDR projects is the Whittier Tunnel, which is shared by cars and trains in Alaska.

Eric Keen grew up in Iowa but took a long road to his new job as head of Omaha engineering and architecture firm HDR Inc.

The Cedar Rapids native studied civil engineering at the University of Iowa (the family story is that his brothers wore out the family name at Iowa State and Northern Iowa) and fell in love with bridges.

Big, long-span, complicated bridges, the kind where there’s so much concrete that you have to allow room for it to shrink and “creep.” His U of I professor Don Branson proved that to the bridge-building industry.

“I found something that I really had a passion for,” Keen said. “That’s what got my interest in civil engineering.

“Eventually, I found that when you start work on these projects, they’re very complicated in terms of public acceptance, resources needed, the impact these projects have.”

He helped develop bridges all over the western United States, working for Parsons Brinckerhoff, an engineering and design firm that got its start with the New York City subway in 1885.

Along the way, Keen ran into folks with HDR, which has its own transportation division and, according to Engineering News Record, is now the No. 1 bridge design company in the United States.

“He was just a great professional,” Keen said, and told Keen, “Sometime, you should come work for us at HDR.”

After 15 years as an engineer, in 1993, Keen switched to HDR, which promptly sent him to oversee its Alaska office and its work on a tunnel leading to Whittier, a community not far from Anchorage.

The catch was that the tunnel was built during World War II for trains. It included a system that loaded motor vehicles onto flatbed railcars and hauled them through the 2½-mile tunnel, the longest in North America.

HDR’s challenge was to design a roadway for cars above the railroad tracks. The result is a one-way tunnel, with staging areas at each end so “platoons” of cars could take turns going through.

Keen did the environmental impact study of the project and was hooked on HDR, at the time owned by a French engineering firm, Bouygues. In 1996, company executives bought the firm back, and it’s been broadly owned by employees ever since.

Omaha’s other longtime architecture and engineering firms include DLR Group, also employee-owned, and family-owned Leo A Daly Co. All three win national rankings and, along with contractor Kiewit Corp., give the city a cadre of professionals in the building industry.

Keen’s HDR projects have included the Ravenel Bridge in South Carolina, and the State of Oregon’s $1.3 billion 300-bridge replacement program in the mid-2000s.

He eventually made his way to Omaha, initially in charge of HDR’s transportation division and in 2011 as president and chief operating officer, the No. 2 spot.

When George Little retired as chairman and CEO at the end of 2017, Keen moved up, becoming HDR’s eighth CEO in its 101 years.

Keen, 60, said the goal is a smooth transition, continuing to build HDR’s 217-office network, initiating its latest five-year plan, acquiring engineering and design companies with growth in mind and expanding its services for clients.

Even from Little’s predecessor, Richard Bell, Keen said, “We have always been on the same page with regards to employee ownership, where our company is going, how to go about growing the organization, the commitment to have Omaha as our headquarters and our home.

“The organizational focus of the company, the hometown, all that’s been absolutely consistent for us for a long time.”

HDR’s multiple offices give it a strong local presence in many cities, Keen said. “That allows our global expertise to be leveraged to support those local programs.”

“If we have a unique project, and we have a need for some unique design capacity or expertise, whether it’s architecture, engineers, scientists, consultants, whoever, we draw upon that global expertise to be able to serve those local projects,” Keen said.

HDR has made 55 acquisitions since 1996, and Keen sees potential for more firms with expertise in technology, including cybersecurity; water-related projects from flooding to drought; health care and science; federal government support; and secondary education.

By the end of this year, the firm will vacate its two buildings at 84th Street and Indian Hills Drive, which have been bought by Children’s Hospital, and a building near Westroads Mall. HDR will lease its new headquarters in the Aksarben Village development from Noddle Bradford 2017, owned by developers Jay Noddle and Dana Bradford.

“We’re looking forward to it,” Keen said. “We’ve been here since 1972, and I’m sure we can find some furniture that’s been around since the 1970s. It’s been a great building, but there’s always some excitement about moving into a new building and bringing everybody together under one roof.”

He remembers adding the second building on Indian Hills Drive in 1997. It quickly filled up.

Out-of-town staffers also are looking forward to the new headquarters, he said. HDR books more than 5,000 hotel nights a year for visiting staff and clients.

There’s no chance that HDR would become publicly owned or sell out to a bigger buyer, Keen said. “We’re committed to the employee ownership model.”

The National Center for Employee Ownership ranks HDR as the ninth-largest employee-owned business in the United States, with 9,650 employees.

One of Keen’s first duties as CEO was to visit offices in Australia and Germany to roll out the employee ownership programs for those countries, which use “synthetic equity” to mirror the benefits of owning HDR stock.

Keen and his wife, Julie, have a daughter, Maggie, who is finishing a degree at Bellevue University and applying for law school, and a son, Adam, who is completing a doctorate at the University of Southern California in civil engineering, specializing in coastal tsunami sea-level rises.

Keen is a downhill skier — not a snowboarder, thank you — and enjoys golf, although he says his game would improve if he had more time to play. He and his wife go for frequent walks.

These days, Keen doesn’t get to work on bridges, although he reads up on the latest projects and designs.

His community duties include serving on the Greater Omaha Chamber of Commerce executive committee and on the board of Bellevue University, but he’s mostly focused on the HDR leadership transition.

As the new building was being designed, Keen and Little were talking about the layout of the executive floor.

“I said, ‘George, we continue to push all our folks into smaller offices because we don’t have as much stuff as we used to. We have to think about that in terms of how we design this new building.’ ”

After Little announced his retirement, Keen said, “He looked at me as we were looking at the office layouts and he said, ‘Now that it’s your office, what do you think?’ ”

How did it turn out?

The office will be on the top floor, in a corner with a view to the west, Keen said. “It’s an appropriate size.”

An initial downtown location fell by the wayside after disagreements over parking and other issues.

Good story, Steve, about an important company around the world, of which Omahans should be proud. The new CEO's roots in Iowa and interests in bridges reminds me that in 1957, I got a $500 civil engineering scholarship at Nebraska from the still busy Paxton-Vierling Steel Company in Carter Lake. With a $100 Regents Scholarship, I roomed with a pal at 3100 Vine in Lincoln for the princely sum of $1.00/day room and board. Part of the scholarship was to work summers in the fabrication shop where I reported for work at about 5 a.m., and learned a lot of earthy terms in languages spoken by the work force. Before I got the scholarship, I really did not know what a civil engineer did, although the beauty of bridge-building clearly attracted me. IN my second year in Lincoln, I even considered quitting school in order to work on construction projects in Latin America, for which I then started studying Spanish. However, when the USSR launched its Sputnik satellite, there was a hue and cry that "The Russians are Ahead," which led to the start-up of a Russian language program at NU. So, I dropped Spanish in favor of Russian, and civil engineering in favor of International Affairs. I also gave up my Paxton-Vierling Scholarship for which I was always grateful. Indeed, after retiring from the Foreign Service in 1999, I visited the Carter Lake office and offered to pay back the $750 which paid for my first three semesters at Lincoln. They would not hear of it, although I did try to help the company find welders who had been drawn away from Omaha for higher wages in the reconstruction post-Katrina. Thanks for reading this, and especially thanks to the generosity of Omaha companies who provide scholarships -- even to boys who dreamed of building bridges of steel, but ended up building bridges of understanding between peoples and nations.