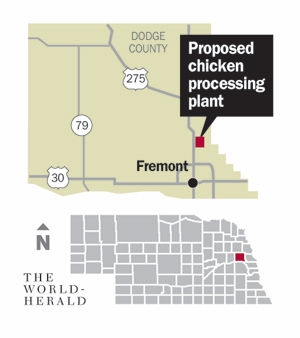 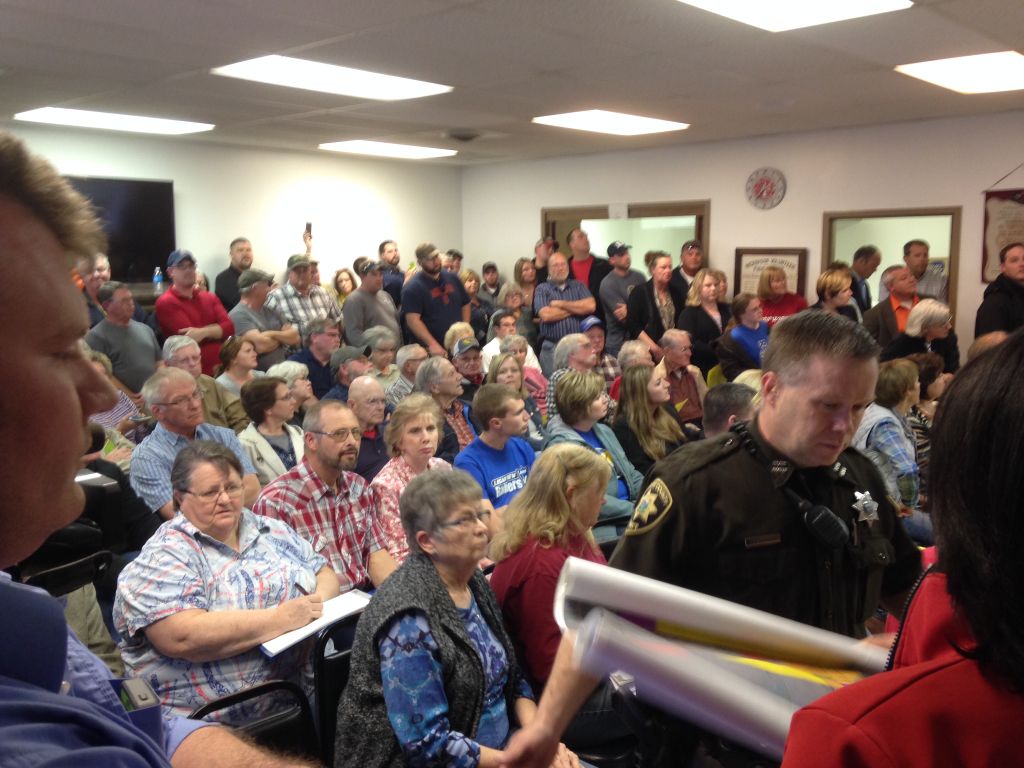 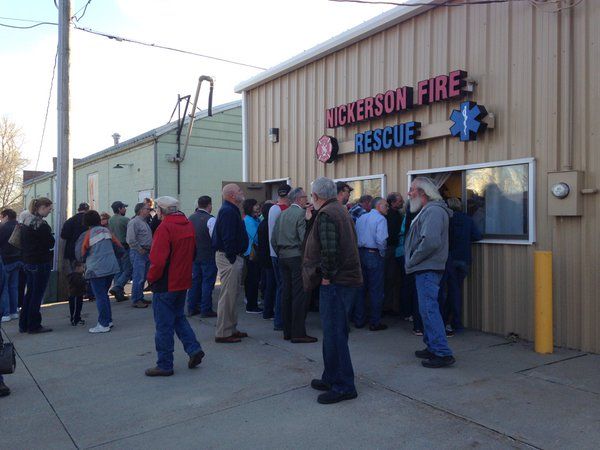 People who couldn't get in to the packed Nickerson Village Board meeting Monday waited outside and listened through open windows.

Opponents in Nickerson speak against a proposed chicken plant north of Fremont.

People who couldn't get in to the packed Nickerson Village Board meeting Monday waited outside and listened through open windows.

NICKERSON, Neb. — This small town might have killed a large poultry processing plant that had been proposed nearby, just north of Fremont.

Members of the Nickerson Village Board voted 5-0 against a plan that would have rezoned the land where the plant would be built. Two board members told The World-Herald they thought the vote effectively would stop the project in its tracks.

Opponents of the plant packed the village fire hall and spilled onto the street Monday evening, railing against the facility and the elected officials considering it.

The crowd erupted into cheers in the wake of the vote. They told officials the plant would bring heavy traffic, disease, bad smells and an influx of immigrant workers and their children.

The board was considering the recommendation of the village planning commission to rezone some parcels of land from general commercial to industrial — a change that would accommodate the plant.

Erik Gahner, head of the village board, said he went into the meeting with mixed feelings. But public comments swayed him. "We do want to grow," he said of the town, but "the risk wasn't worth the reward."

The rural location just outside Fremont is a global food company’s first-choice location for building the poultry processing plant, which could open in 2018 with 1,100 workers and a $1.2 billion annual economic impact. Fremont and state officials wouldn’t name the company. The Greater Fremont Development Council has been working with the company.

Asked whether the vote would kill the project, Greater Fremont Development Council Executive Director Cecilia Harry said, "We are going to regroup and assess the project."

Later, in a statement, Harry said, "We will contact the company to determine if they are interested in continuing the process of locating a business in the greater Fremont area."

People at the meeting told officials in this town of about 350 that they shouldn't weigh any changes to zoning until the name of the company building the plant is publicly known.

"I don't trust somebody that wants something from me, who won't tell you who they are, and won't let you look at one of their facilities to see how they operate," said Chuck Folsom, an area farmer.

Todd Taylor warned of the long-term consequences: "Once we do this, we can't go back ... listen to your community."

Kathleen Coartney said she was concerned about truck traffic: "It is just too much, too big, too fast and people will die," she said.

Jeremy Klein, superintendent of the Logan View Public Schools, said proposed tax-increment financing would hamstring his ability to educate the children of plant workers by diverting tax revenue for a period of years.

And John Wiegert, who has opposed illegal immigration in Fremont, said the plant would bring the issue to Nickerson.

"Being a Christian, I don't want Somalis in here," he said of who he expected to be plant workers. "They're of Muslim descent. I'm worried about the type of people this is going to attract."

Robert Mulliken said he once toured a chicken plant in California and was dismayed at the lack of "Caucasians." "I'm not prejudiced at all but that was the one time in my life I really got scared," he said.

As the meeting stretched into a third hour, an overflow crowd remained standing outside the hall and strained to listen through open windows.

Board members Joe and Nettie Aufenkamp, who are husband and wife and both on the board, explained why they would vote against rezoning.

Joe Aufenkamp called for a show of hands in the audience of about 100.

Many signaled opposition; just one supported it.

Nettie Aufenkamp said she opposed the plant because she didn't know how Nickerson would house the workers. After conducting online research about the chicken industry, she said, "I no longer think this is a good idea."

Each of the country’s big-four chicken processors told The World-Herald that, nope, they’re not the company involved in a huge chicken-processing plant in the works for Fremont, Nebraska.

Rural Fremont is a global food company’s first-choice location for building a poultry processing plant, which could open in 2018 with 1,100 workers and a $1.2 billion annual economic impact. Fremont and state officials wouldn’t name the company.

Area resident Randy Ruppert says that when people asked local officials for details about plans for a giant chicken plant that could be built north of town, they were met with silence.

Opposition heard at a meeting in the village of Nickerson may push the company behind the plans to reveal itself soon and respond to the community’s concerns, said Randy Thelen, senior vice president at the Greater Omaha Economic Development Partnership. The plant could employ 1,100 workers and generate a $1.2 billion annual economic impact.

The mayor said the Council cancelled because the project is in limbo. On Monday, the Village of Nickerson, north of Fremont, rejected a zoning change needed for the project, after the village board there heard heavy opposition to the plant.

Supporters said the project would bring needed growth to the rural county. “The economic benefit to this area, this region, is enormous,” said Chuck Emanuel of North Bend, Nebraska, a member of the Nebraska Corn Growers Association board.

Bill Crider is working with Deloitte Consulting to scout sites for the proposed plant. Lincoln Premium Poultry would operate the plant, which would produce raw chicken made only for Costco.

Backers of a proposed chicken processing plant on Sunday rolled out their own campaign, passing out “We 'heart' Costco” yard signs at an afternoon event.

After scrapping their first choice for the site of a proposed new chicken plant, developers now are checking out farmland just south of Fremont, say landowners and the city’s mayor.