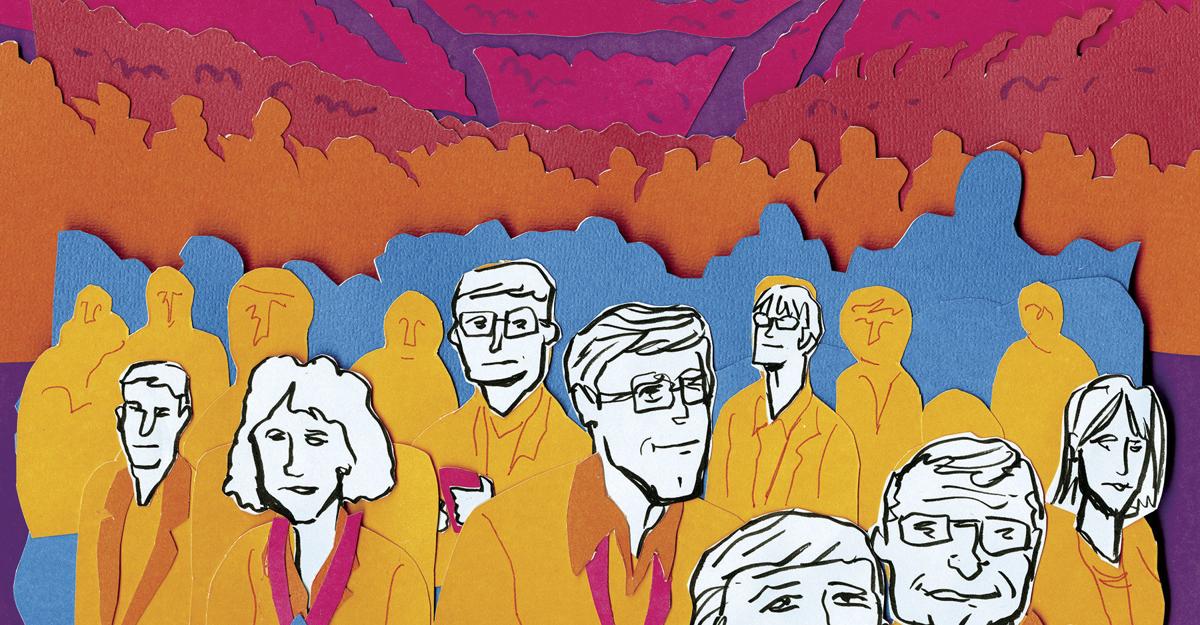 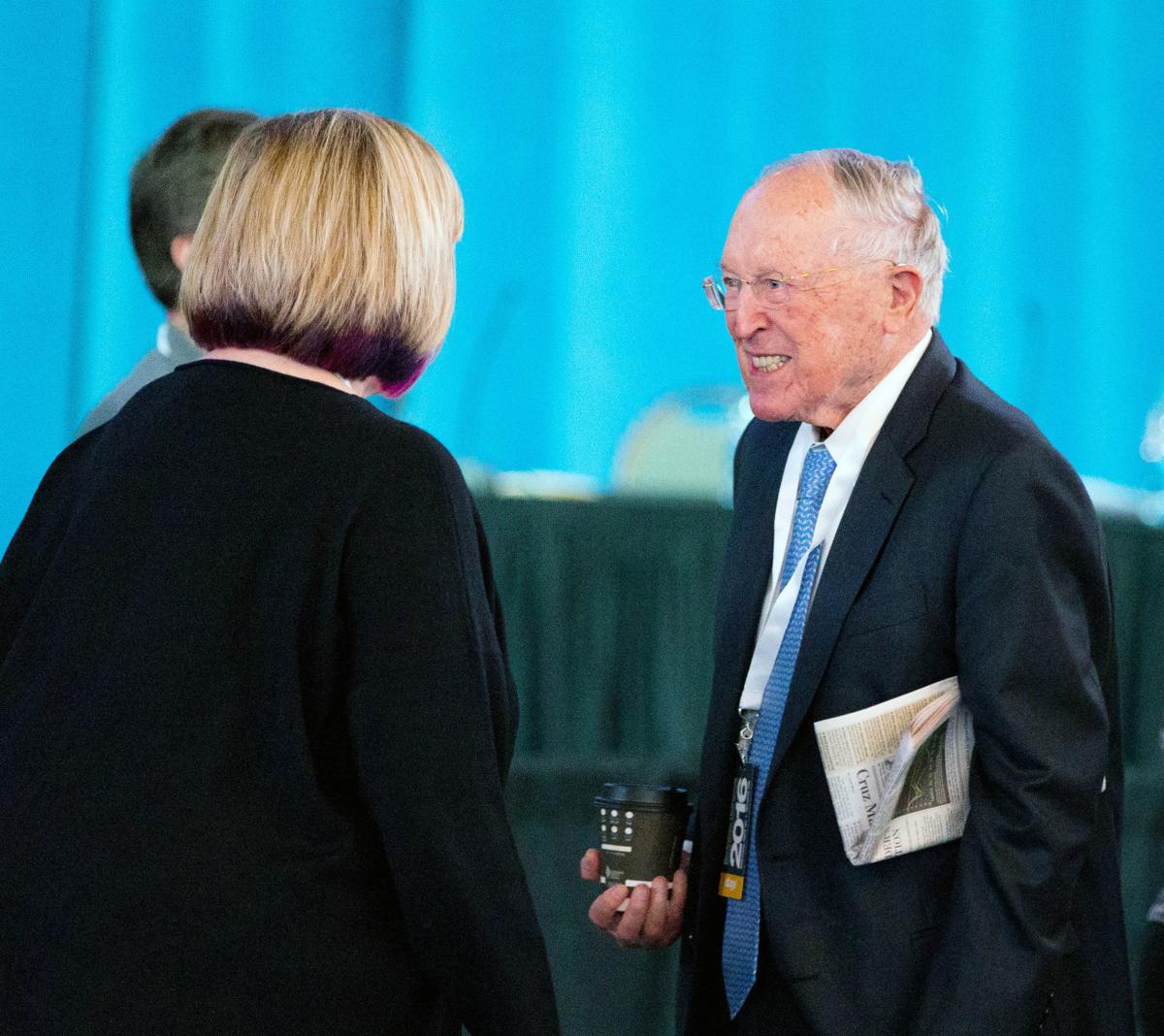 Sandy Gottesman, a friend of Buffett's and a large shareholder, talks with Susie Buffett before the meeting.

The employee lunchroom on the fourth floor of the National Indemnity Co. building. This was the original site of the Berkshire Hathaway Shareholders Meeting. 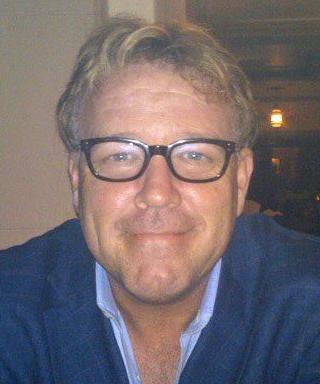 Lawrence Cunningham is a professor at George Washington University and prolific author, most recently of “Berkshire Beyond Buffett: The Enduring Value of Values.” He organized the 1996 symposium with Warren Buffett and Charlie Munger that resulted in “The Essays of Warren Buffett: Lessons for Corporate America,” the thematically arranged book of Buffett’s shareholder letters. In the spirit of this piece, Buffett urged Cunningham to self-publish “The Essays” to save the costs of the middleman.

Lawrence Cunningham, a professor at George Washington University, has published extensively on Berkshire and Buffett, including a book last year co-edited with his wife, Stephanie Cuba, “The Warren Buffett Shareholder: Stories from Inside the Berkshire Hathaway Annual Meeting.”

Buffett has practiced the art of shareholder catering since his earliest days running Berkshire Hathaway. He has long promoted the menu in his shareholder letters. A popular paraphrase of his 1979 letter says “you get the shareholders you deserve.”

Quality shareholders see themselves as part and permanent owners of a business. They work to understand the company, its managers and their philosophy. They focus on business results, not stock price.

Berkshire’s record of attracting quality shareholders remains extraordinary. But today all those figures are lower, largely due to the changed and fragmented shareholder universe. Nowadays, index funds rule, though they were novelties through the 1980s. Up to 40% of public equity is now owned by declared indexers, or closet indexers, those proclaiming stock picking prowess while maintaining sprawling portfolios that hug an index. Owning small stakes in hundreds or thousands of companies, indexers cannot understand the vast majority of them.

Transient traders have long prowled stock markets, but average holding periods fell greatly through the early 2000s. They now average two to three years for most shareholder segments and below one year for many. As a group, transients are as dominant as indexers, sporadically commanding up to 40% of total public equity, too, and nearly as disadvantaged in understanding given companies.

You may know about Geico and Dairy Queen, but here are 5 Berkshire companies you may not know

Such a rise of indexers and transients created a vacuum in managerial accountability. Filling it are activist shareholders with a diverse range of horizons, commitments and agendas. Variably controlling around 5% of total public equity, their campaigns amplify their influence.

The median company today sees a distribution of shareholders matching the universe — about 40% of both indexers and transients, along with 15% quality and the potential for activists. Above and below the median are groups of companies that enjoy lower or higher densities of quality shareholders.

Berkshire is at the extreme end of the spectrum, with a low proportion of indexers, scant transients and a dominant quality base.

Other attractors of quality

But while Berkshire and Buffett are exceptional, they are not unique. Closer to their end of the quality spectrum, Fairfax Financial is another longtime attractor of quality shareholders.

Ever since founding it in 1985, Prem Watsa has also used his shareholder letters to compose a corporate menu catering to quality. In his 1995 letter, Watsa stressed a menu clear on dividend policy, shareholder engagement and compounding capital over long time periods.

Elsewhere in that letter he reported that only 20% of Fairfax’s listed shares changed hands annually, putting it right at the bottom, which he declared was “exactly where we want to be!”

Another exemplar is Markel Corp., also an insurance company with a portfolio of industrial subsidiaries and securities, including a large and long-held stake in Berkshire. CEO Tom Gayner is explicit in his shareholder letters that Markel’s priority is drawing the “right owners” — meaning quality shareholders.

The companies mentioned so far all run major insurance operations, a business prone to a long-term investment orientation. Yet all sectors today face short-term pressures addressable by a long-term menu attracting quality shareholders. In my book, I plan to profile two dozen companies that exemplify this approach, including Graham Holdings, Jefferies, SEACOR and Constellation Software, where I’ve been a director for two years.

Will this be the year that Warren Buffett bags his 'elephant' — and what could it be?

Catering accordingly, Berkshire has never volunteered any form of quarterly communications. As early as 1978, Buffett advertised that would be the case. He restated the point in this year’s letter, while explaining the dangers of a quarterly focus. It may begin with innocent fudging — accelerating revenues, deferring costs. But such moves create new baselines for the next quarter and so on. To keep up, the gambit requires endless repetition in rising magnitudes that often snowball into fraud.

In Watsa’s latest letter, he wrote pointedly of another problem: Quarterly calls rivet attention on quarterly growth, which in turn drives stock trading and price volatility. That feeds transients.

Some companies, including Constellation, have turned instead to a periodic written Q&A. Shareholders submit questions. The CEO prepares responses. When volume and content warrant, the company uploads these to its website, notifying all shareholders by email.

Technology plays a role. From one side, quarterly calls began in the 1980s amid proliferation of conference call technology. That’s being superseded by Internet-based correspondence.

From the other side, high frequency traders increasingly use artificial intelligence to analyze sentiment at quarterly calls. Algorithms detect when managers are optimistic or pessimistic and automatically direct programmed trading in the stock. This hair-trigger behavior makes some transients look long term. It’s a clear downside to today’s quarterly call.

What Buffett-branded merchandise can you expect to find around booths this Berkshire weekend?

A third way to attract quality shareholders is what Berkshire is doing this weekend: hosting an engaging annual meeting. This is a chance to greet managers, fellow owners and employees, as well as sample company products and attend programs being held all around Omaha.

Before the 1930s, annual shareholder meetings were perfunctory legal affairs that achieved little and attracted few. But amid rising individual share ownership, a group of gadflies, led by the Gilbert brothers, spent the next four decades making meetings matter.

Not all managers welcomed this. In the early 1970s, J.B. Fuqua, of Fuqua Industries, led the campaign in favor of shareholder voting by mail. But shareholders pushed back and stock exchanges ruled that live annual meetings were required.

Just then, in 1975, Buffett began what would become the most popular one ever, at Berkshire. From a dozen attending that year in an Omaha office cafeteria, each decade since added a digit — hundreds, thousands, tens of thousands. Last year, more than 40,000 attended.

My wife, Stephanie, and I chronicled the Berkshire annual meeting in a book published last year. It features essays from 40 prominent veterans of the meeting, who explain its value. They reflect Berkshire’s menu for quality shareholders.

All the other companies mentioned — Constellation, Fairfax and Markel — host substantive and popular shareholder meetings — while about 100 companies have recently switched to online-only versions. Those will appeal mostly to indexers or transients rather than quality shareholders.

Benefits of the quality breed

As to why companies might wish to attract quality shareholders, the breed offers many benefits. Before I highlight them, I should be clear that my appeals on behalf of quality shareholders are not intended to diminish the value that all shareholders contribute, starting with capital. In fact, specific shareholder segments add unique value: (1) activists promote management accountability; (2) index funds enable millions to enjoy market returns at low cost; and (3) traders offer liquidity.

Yet side-effects can occur too: (1) activists becoming overzealous; (2) indexers lacking resources to understand specific company details; and (3) traders inducing a short-term focus. For corporate benefit, a substantial cohort of quality shareholders can add balance to this mix.

As to curbing overzealous activism, quality shareholders can become white squires. When a board perceives activist excess, it helps to have a few large long-term owners to consult. If they agree, the company’s hand is strengthened, resisting excess while addressing legitimate concerns the activist may have.

Quality shareholders have the capacity to study company specifics, which indexers, being stretched thin, lack. Indexers may be good at analyzing dynamic issues as they arise but rarely develop deep knowledge that quality shareholders command. On shareholder votes, that’s a big advantage.

Being long-term, quality shareholders offset short-term pressure of transients. Companies pressured to deliver this quarter and today’s stock price benefit from shareholders focused on rolling returns on capital over many years.

Finally, there’s the personal factor — what I call the brain trust. While all shareholders contribute capital, some with larger stakes and longer time horizons become wise directors and unpaid advisers.

Three examples: Berkshire in 2005 appointed to its board longtime 3% shareholder Sandy Gottesman of First Manhattan; Constellation has since going public benefited from the sage board service of its significant stockholder, Steve Scotchmer of Manitou Capital; and Fairfax over many years received valuable counsel from one of its highest quality shareholders, the late Sir John Templeton.

To return to Phil Fisher’s analogy between the corporate menu and the culinary one, segment today’s shareholders this way: quality (five-star) shareholders load up and stick around; transient (fast food) shareholders stop in and speed away; and index (smorgasbord) funds may taste all, but love none. All have a place, but companies enjoy considerable flexibility writing their menus. Even with today’s fragmented shareholder universe, they may still get the shareholders they deserve.

Where to eat (besides Gorat's) during Berkshire Hathaway weekend

Your guide to the 2019 Berkshire Hathaway annual meeting in Omaha

Warren Buffet for years leaned on book value as the best measure of Berkshire because of what he saw as the capricious nature of the stock market. That was, until this year.