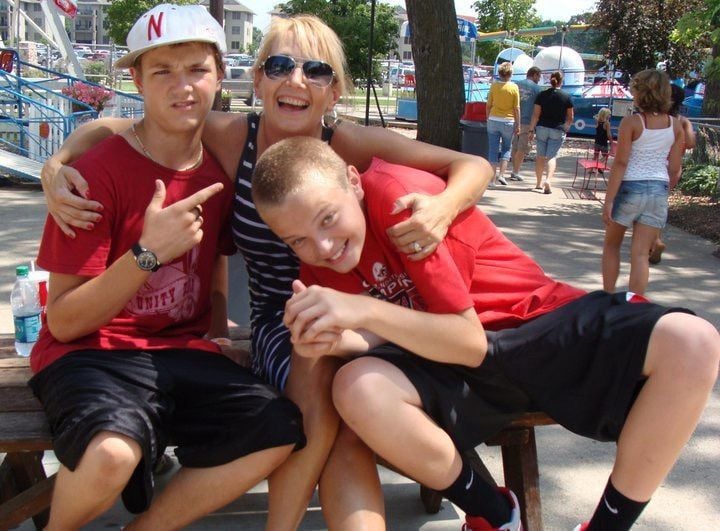 Lynn Kirkle with her two sons Tyler, left, and Matt.

It started with a phone call.

My mother, who lives alone, called my brother-in-law in the middle of the night because she thought there was a bird in her house. My mama has a flair for the dramatic, so the family-wide assumption was that she either heard a distant chirping sound and overreacted, or she had a bedtime toddy that was keeping her imagination awake.

Regardless, he told her he would come over and check it out in the morning, and that made her rest easy.

When my brother arrived at her house the next morning, he got on a ladder and crawled on all fours to examine every nook and cranny for the possible existence of a bird. He found no evidence of any creature whatsoever, so all of us kids breathed a sigh of relief that we wouldn’t have to figure out how to get a bird out of a house.

The next day, my 3-year-old daughter and I went over to her house for a visit. Just as we pulled up, we saw the Humane Society van pull away. As it turned out, there hadn’t been a bird in her house. No, there was a bat instead.

It wasn't just inside her house, either. It was in her bedroom. The thing had decided to take flight and do rapid flyovers and flapping laps while she attempted to take her afternoon nap. She called the authorities, who promptly arrived to capture and dispose of Mr. Bat.

The next day, during a family Labor Day cookout, I told my oldest daughter about the bat while we ate. As she was laughing, my oldest son sat down beside us and said, “Wait, what? There was a bat in grandma’s house?” I told him the story, and my other two sons sat down to listen in.

We all laughed — hysterically — with my mom, who also kept repeating the story. Her version was complete with details about how loudly she was screaming when she called the Humane Society. We cackled some more.

Upon hearing of grandma’s recent guest, our toddler jumped up and down at the idea of a Halloween bat creeping around inside of her house. She keeps checking to see if he’s returned.

When I shared this hilarious story — at least I think it is — with one of my neighbors, I could tell she was a bit horrified by our reactions. “What if she’d gotten rabies?”

“But she could have," my neighbor replied.

I thought about that and realized she was kind of right. My mother’s bat visit could have been a very serious situation. Perhaps we should’ve treated it that way. But my family doesn’t work like that.

When my mom was in rehab with a broken back, we took turns racing down the hall in her wheelchair to make her laugh. When I went to the emergency room after having an extreme allergic reaction to cashews, my daughter took pictures of me puffing on my inhaler in the waiting room and posted them in a collage on social media.

Laughter is how we deal with things.

Trying to use tech to help your busy parent life? It doesn't always work

Busy parents try to rely on technology to make life easier — but it doesn't always work out that way. Sometimes, the results are hilarious.