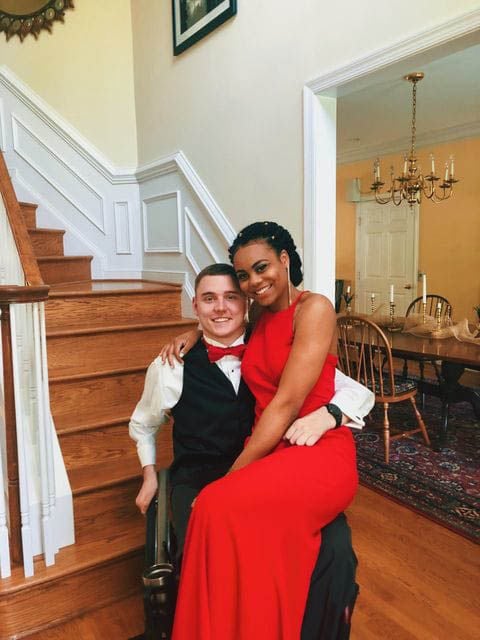 Charisma Jamison and her boyfriend, Cole. 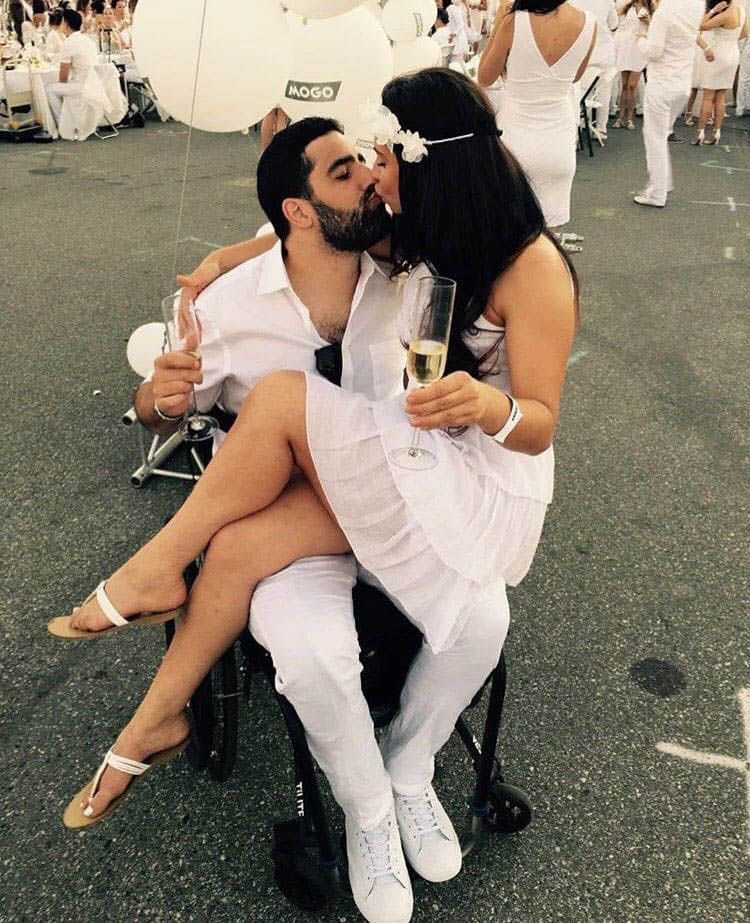 Elena Pauly and her boyfriend, Dan, during Dîner en Blanc in Vancouver.

Charisma Jamison and her boyfriend, Cole.

Elena Pauly and her boyfriend, Dan, during Dîner en Blanc in Vancouver.

On Jan. 2, 2016, Elena Pauly traveled to Cuba with her boyfriend, Dan, on their first vacation abroad after three years together. The day before they were set to return home, Dan, dove into the shallow end of the resort pool headfirst and was immediately paralyzed. When the couple returned to their home in Vancouver, B.C., Dan, a stonemason, confronted a new life. Pauly discovered a new normal.

"I would cook for him, shower him, I would turn off the lights for him, then close the door and I would just sit in my car and cry," Pauly, 31, told The Washington Post. "I felt so alone."

From that experience, came a new group called WAGS of SCI: Wives and girlfriends of spinal cord injury.

The name is a variation of popular reality TV shows. WAGS is an acronym that usually refers to the wives and girlfriends of professional athletes. For years, networks like E! and VH1 have made entire franchises off the extraordinary and glitzy lives of WAGS, who bond over luxury vacations, live in mansions and stand by their millionaire athletic partners.

But Pauly and her friend Brooke Pagé have started to change the meaning of WAGS, highlighting a different kind of sisterhood that's anything but glitzy, dedicated to making sure other women in their situations would feel supported.

It started when Pauly used the hashtags #quadwife and #spinalcord while posting pictures of her and Dan on Instagram.

In March 2017, Pagé, 32, discovered Pauly while scrolling on her search feed. Pauly's story resonated all too well.

On May 28, 2014, Pagé's husband, Evan, then a construction site superintendent, was at a job helping to build a new school in West Vancouver. That's when a load of unsecured 3,500-pound wood flooring fell on his head, smashing his helmet and leaving him paralyzed.

"It was a total freak accident," Pagé said of her 30-year-old husband.

After discovering each other on Instagram and learning that they lived just two blocks from each other in Vancouver, Pauly and Pagé would get together for yoga and coffee. But their meetups were much different than the way other girlfriends would hang out.

They would talk about bowel or bladder accidents, disability services in their area, what to do if their partner fell out of a wheelchair and medications.

"Just being able to relate to somebody in your shoes is just really hard to find," Pagé said. "We never wanted a woman whose partner has a spinal cord injury to ever feel alone again."

Pauly said that while there are many different activities at rehabilitation centers for injured people, she noticed there wasn't a community group for their partners.

So, the women started an Instagram profile in November 2017, where they shared glimpses of their lives alongside their paralyzed partners. Pagé shared what it was like honeymooning in Rome, Barcelona and Amsterdam with six suitcases and a 300-pound motorized wheelchair. Pauly posted how she went to her boyfriend's wheelchair rugby games followed by drinks afterwards.

Their Instagram page highlights a new story each day of a different woman's experience being in an inter-abled relationship.

"We started this with the goal to just connect with other ladies in Vancouver," Pagé said. "We're the only ones who understand our situation. Our friends don't get it. Our families don't get it."

Partners living with a person with a sudden spinal cord injury oftentimes struggle to regain a well-functioning everyday life, according to a 2011 study by the International Journal of Qualitative Studies in Health and Well-being. Research showed partners experienced much distress and appreciated the support they received, however, they felt they were mainly left to manage the difficult emotional and physical tasks on their own.

At first, the WAGS of SCI's following was small, with just a few dozen when they started the page. Then, on Valentine's Day of this year, Garrett Greer, a World Series of Poker player and quadriplegic, posted on his Instagram account about how the group inspired him.

"Happy Valentine's Day!!! - My #WCW goes to Wives and Girlfriends of SCI FOLLOW @wagsofsci to support these amazing women! This is a network of women sharing the battle against a spinal cord injury by sticking with their men who suffered a SCI. These women inspire me! - #HappyValentinesDay #ValentinesDay #SpinalCordInjury #Quadriplegic #SCI #Inspiration #LoveConquersAll"

After Greer's post, thousands of women worldwide with partners in wheelchairs started following them.

The women ask each other questions, such as whether it is safe to have unprotected sex with a partner with a catheter, how they separate the role between being a caregiver and girlfriend, and how they deal with bouts of depression. Their posts also show the more humorous side of dating someone in a wheelchair, like being able to ride on their partner's lap when their feet start hurting from wearing high heels.

In several posts, the women talk about finding a "new norm." For example, they discuss the hours spent at physical therapy and doctors appointments but also doing activities that they did before their partner's injury such as going to the beach and NFL games. One woman said, "The only disability in life, is a bad attitude."

In comments on the posts, the women are often praised for sharing their unique love stories.

Charisma Jamison said the WAGS of SCI community has been invaluable. The 24-year-old started dating her boyfriend, Cole, in December after meeting at a rehabilitation center in Richmond, Virginia, where she was working. "He slid in my DMs," Jamison told The Post.

Cole was paralyzed after a diving accident when he was 16. Their relationship raised new questions for Jamison's family.

"My family loves Cole and are very supportive, although there were some concerns when we first started dating," Jamison said. "The group has helped me prepare for certain things and situations."

Jamison recalled the time in February when the couple tried meeting up with her friends at an arcade bar, but had to leave because the crowded area prevented Cole from moving around in his wheelchair. On the couple's YouTube channel, Roll with Cole, they shared that sometimes people stare at them in public or leave them negative comments.

"There's going to be people out there that have a strong opinion about our relationship but that's their problem not ours," Jamison said. She joked that she wants to be on a beach in Tahiti pregnant with triplets with Cole by her side.

"There's times I get really frustrated, but the women are always there to give me advice," Jamison said.

Some 5.4 million people are currently living with a form of paralysis, according to the Christopher & Dana Reeve Foundation. Although spinal cord injuries can happen to anyone, about 78 percent of new SCI cases occur in males. Men are more likely to take risks and play sports that cause SCI. The incident rate of SCI is highest among young people  between the ages of 16 and 30, according to the National Spinal Cord Injury Association.

The WAGS of SCI's internet connection has spawned meetups around the U.S., Canada and abroad. In August, a group of WAGS of SCI members got together in Sydney, Australia, at the Wheelchair Rugby World Championships.

Most of their followers are women between the ages of 25 and 35, but they recently had a 16-year-old high school girl reach out to them for advice after her boyfriend became paralyzed.

Pagé and Pauly said they also receive messages from paralyzed men who say the group gives them hope that they will find love one day.

Relationship coach Laurie Davis Edwards told The Post she believes that the WAGS of SCI are "empowering."

It's the beginning of what has been an unexpected expansion of what it means to be a WAG. And the women leading the initiative hope others can see what they see and fight for their partners.

"Love is love and just because you're in wheelchair does not mean you're not worthy of love," Pagé said.

'Black hairy tongue' is an actual medical condition, and it looks as weird as it sounds

Don’t panic, but there is a medical condition in which a person’s tongue can take on a dark, woolly appearance — and it’s appropriately called “black hairy tongue.”