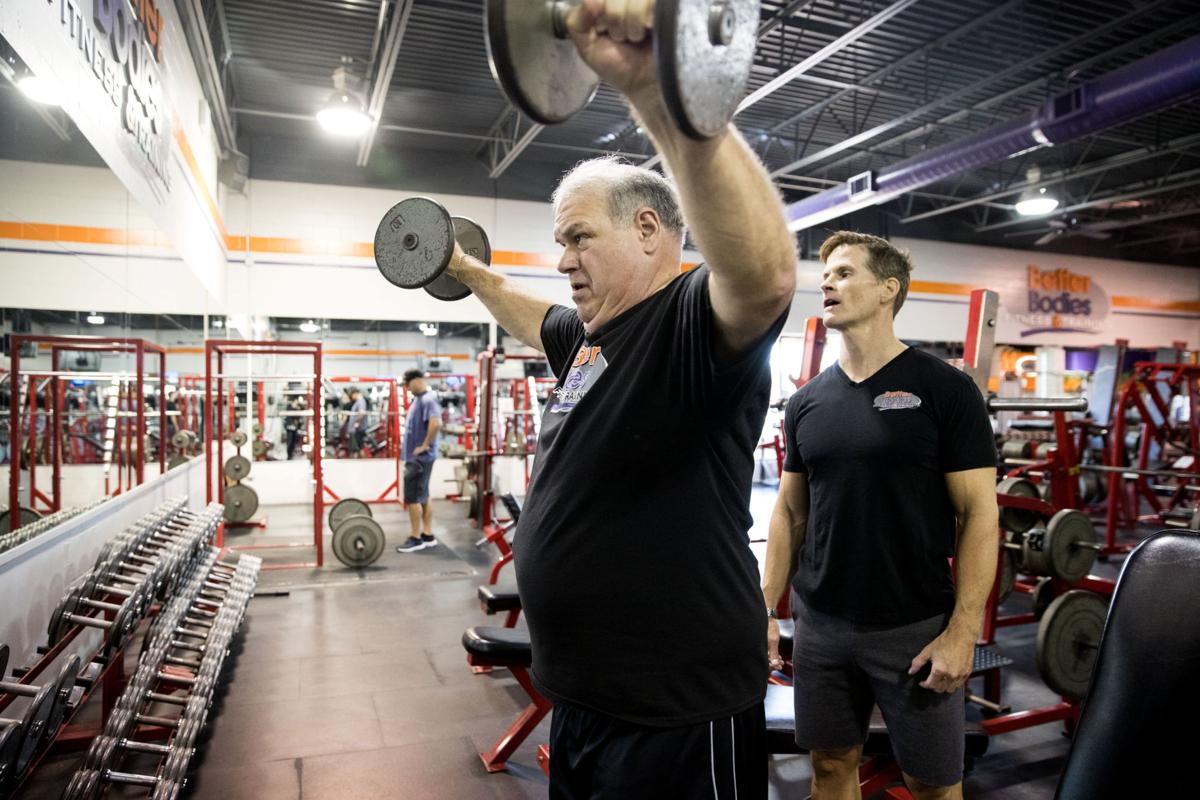 John Anderson works out as his trainer John Barnhill checks his form at Better Bodies Fitness in Omaha. In addition to losing weight, Anderson has started to get his diabetes under control. 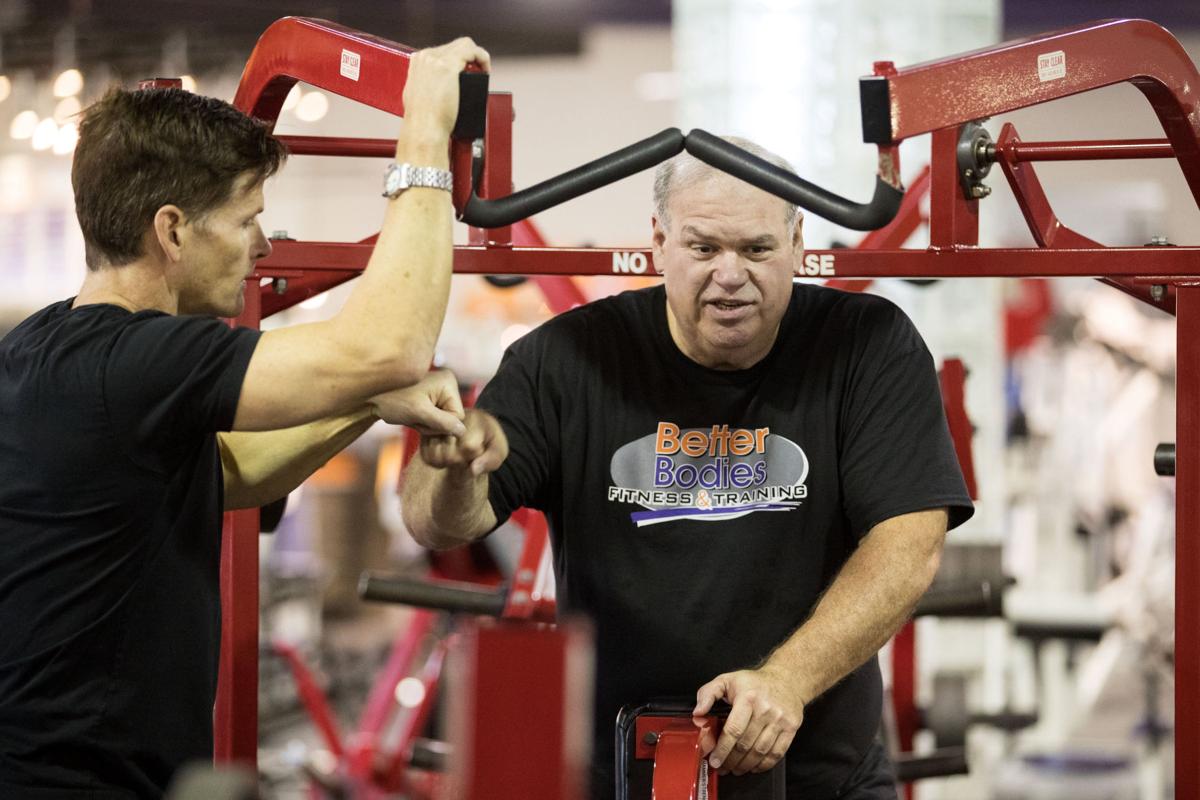 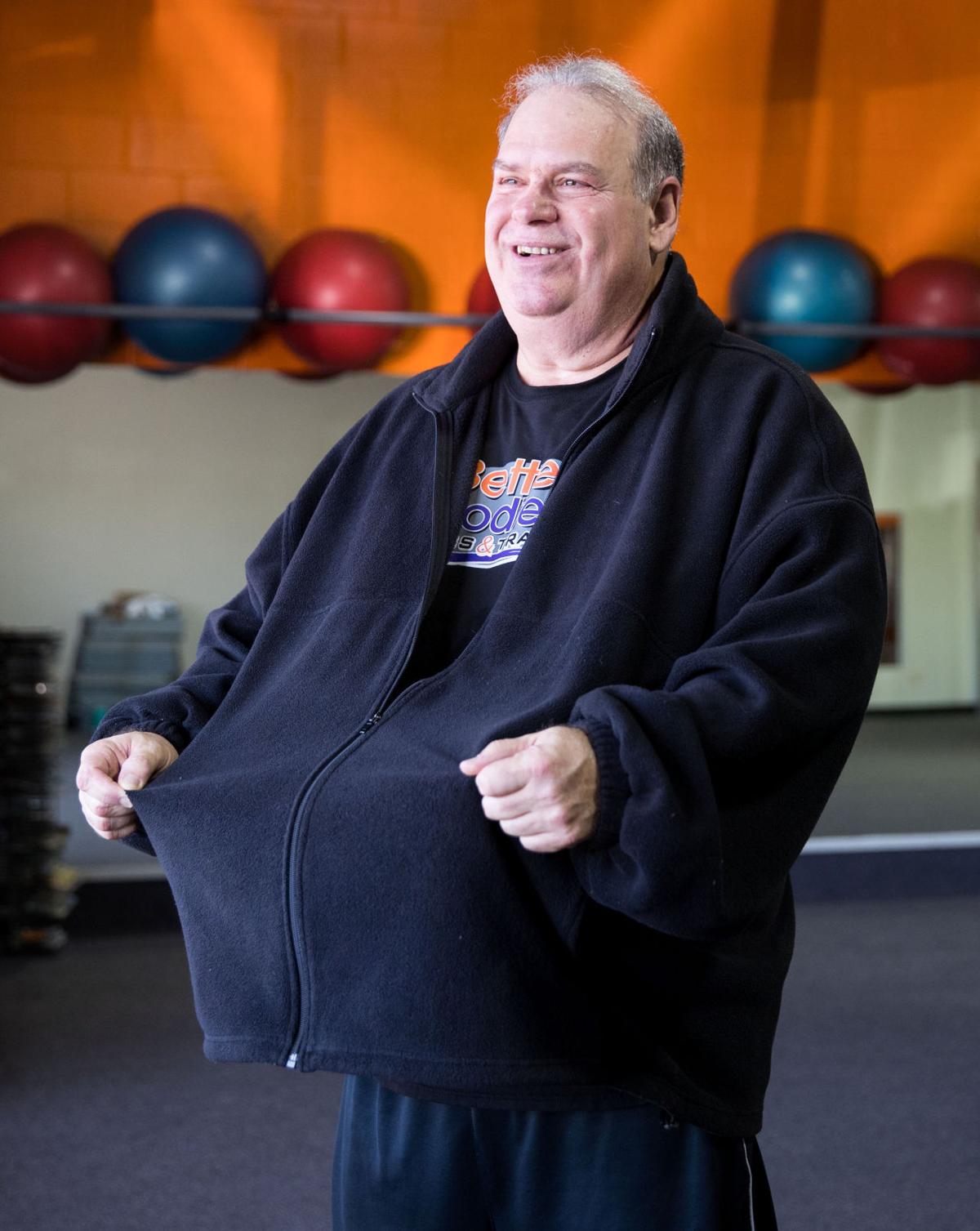 John Anderson works out as his trainer John Barnhill checks his form at Better Bodies Fitness in Omaha. In addition to losing weight, Anderson has started to get his diabetes under control.

John Anderson hasn’t missed a workout in over a year.

He’s battled sniffles and colds, but that never stopped the Omaha man from working with weights or racking up miles on the treadmill.

And persistence has paid off for Anderson, now 57.

Since he started his exercise efforts a little over three years ago, he’s dropped more than 100 pounds.

But he’s most proud of cutting back on medication to manage his Type 2 diabetes.

“You’ve just got to get out and take care of yourself. That’s what I started doing,” Anderson said.

It’s been a long journey, he said, but it’s far from over. Anderson hopes to drop another 50 pounds and stop taking his diabetes medication altogether.

Anderson regularly got breakfast and lunch from fast-food restaurants. Dinners were often eaten at restaurants or buffets. Fried foods, potatoes, diet soda and bread were some of his favorites.

At work, Anderson, who owns a drywall company, would quickly become fatigued at job sites. Going up and down stairs in apartment buildings and hospitals left him exhausted.

The numbers on the scale ticked closer and closer to the 400-pound mark. Insulin shots became more frequent to manage his diabetes. It got harder and harder to keep up with his young grandchildren.

More than 30 million Americans have diabetes, according to the Centers for Disease Control and Prevention. The majority of those diagnosed have Type 2 diabetes, which is largely caused by an unhealthy lifestyle. It can lead to heart disease as well as nerve, eye and foot damage.

Anderson was diagnosed with diabetes in his early 30s. The diagnosis didn’t come as a shock to him since it runs in his family. But it was “devastating” once he started needing more and more medication.

Anderson needed to make a change.

“I had grandkids and I wasn’t going to be able to enjoy them. I was scared with the diabetes so out of control,” he said. “I got tired of poking. I was like a pincushion.”

He started by making a 500-step walk from his front door to the mailbox. At first, he could barely make it there and back.

As it got easier, he started making that trek multiple times a day.

Then he extended his route. He walked from the street to the stop sign for a one-way total of 994 steps.

He stuck with it every day, six days a week. After three months, he started walking five miles a day.

“Rain or shine, I went out and did it,” Anderson said.

He changed his diet, too. Now if he goes out to eat, he orders the healthiest item he can find on the menu. He’s cut out bread, butter and sweets. Now a typical meal might be grilled chicken with enough vegetables to fill half of his plate — usually steamed broccoli or cabbage — and whole-grain crackers or brown rice.

The weight started falling off. Anderson joined a gym to put on muscle.

When Anderson first started at the gym, he was in rough shape, said trainer John Barnhill at Better Bodies Fitness. He’d lost a significant amount of weight, but lacked the skills needed in a functional workout.

A year later, Anderson went from a 15-second plank to a 1½-minute plank. Now, he uses an 80-pound kettlebell when he squats.

“His workouts come first,” said Barnhill, who owns the gym. “He’s a walking billboard for someone who says they don’t have time to go to the gym. He’s extremely busy and makes it a priority.”

With his 108-pound weight loss, he had to purchase a new wardrobe. He’s down to a size 38 pant and 2XL shirt. At a family reunion, some of Anderson’s extended family didn’t recognize him.

Since working out and shedding pounds, Anderson has more energy. He tackles the household chores, visits the gym four times a week, and can more easily keep up with his grandkids.

Anderson wants to drop another 50 pounds. His main goal is to stop needing diabetes medication.

It’s possible he could get to a point where he no longer requires as much medication to manage the disease, said Kristine Story, a nurse practitioner with Methodist Health System.

Story, who has treated Anderson for about 15 years, said his weight made it very difficult to control the disease. At one point, he was taking more than 200 units of insulin a day, plus other medication. Now he’s taking less than 70 units of insulin.

“It’s a major lifestyle change,” Story said. “His diabetes is so much better controlled.”

While staff regularly stress the importance of maintaining a healthy weight, making a change has to be the patient’s decision, Story said.

“He was the one who initiated it. He really took the leap and has embraced this lifestyle,” Story said. “He said to me, ‘I don’t think I could ever go back.’ ”

Anderson had lost weight before, in his 30s, but couldn’t maintain it. This time is different, he said; he wants to live longer.

Hansen: Once an overweight addict, Omaha triathlete recycled his life and turned his trash into treasure

He walked 3 miles to the nearest meeting at age 25, announced himself as an addict and alcoholic, and on April 5, 2007, stopped cold turkey. He says he hasn’t had a drink or taken a drug since.

Show your four chambers some love.