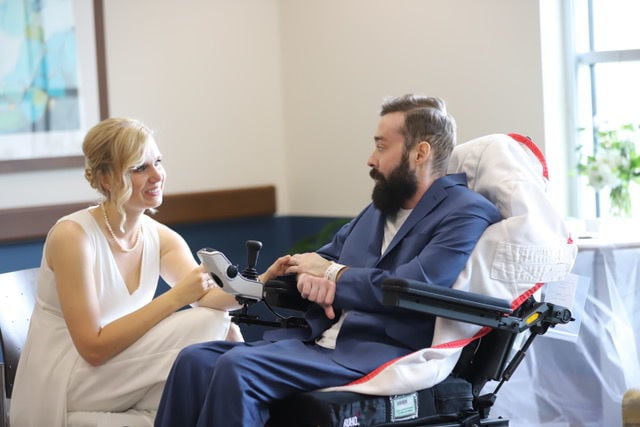 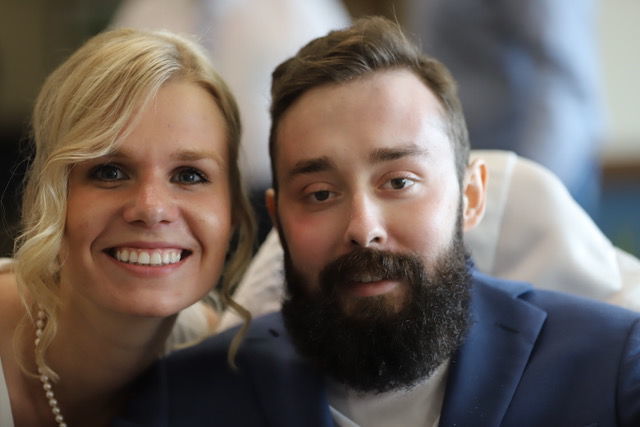 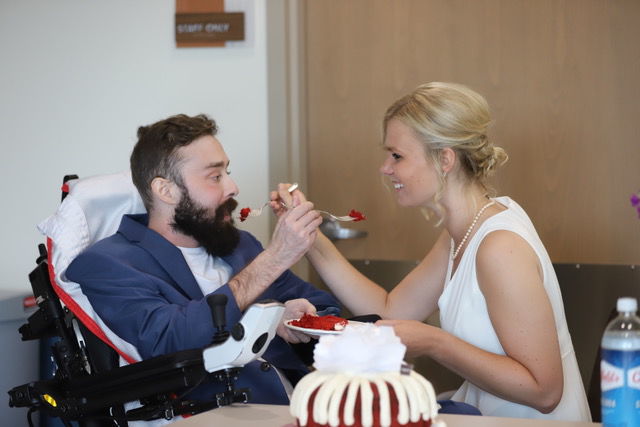 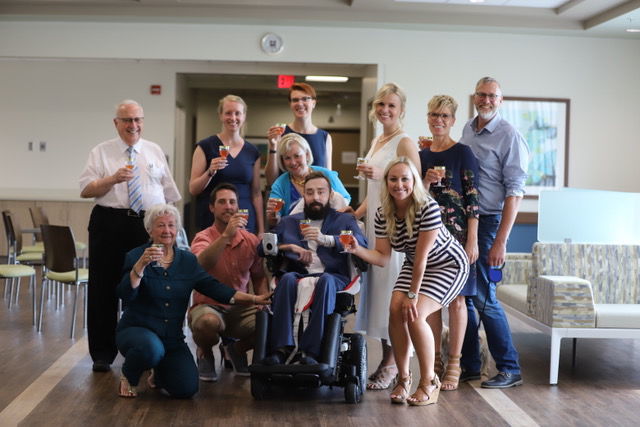 Pia Weis and Chris Ludi, who is battling cancer, married on June 30. Close family members attended the ceremony in the dining room of the Madonna Rehabilitation Center.

Pia Weis and Chris Ludi, who is battling cancer, married on June 30. Close family members attended the ceremony in the dining room of the Madonna Rehabilitation Center.

Pia Weis sat down at the end of her wedding ceremony feeling faint after an exhausting day.

In many ways, it was the wedding she and her new husband, Chris Ludi, had always wanted — casual and spontaneous, just like them.

The two exchanged vows June 30 in front of close family, she in a white jumpsuit and heels, he in a navy blazer. They fed each other a bite of red Bundt cake on forks labeled Mr. and Mrs.

But there were reminders of their less-than-perfect reality: Ludi’s wheelchair, his sleepiness and pale complexion, the doctors and nurses just outside the Madonna Rehabilitation Center dining room.

When Beyoncé’s “Halo” began to play, it suddenly took Weis, 26, back in time.

Back before the mysterious pain and lump appeared. Before the blur of tests, doctors and hospitals. Before her 28-year-old husband was diagnosed with cancer.

It took her all the way back to age 17, when a shy teenage boy dedicated the love ballad to the girl he liked — and their love story began.

“It’s the risk that I’m taking

I ain’t never gonna shut you out”

When Ludi first laid eyes on Weis in the hallways of Wahoo Public High School in 2009, he had just two words to describe her: “Really hot.”

The feeling was mutual. Weis, a foreign exchange student from Germany, got butterflies in her stomach while sitting in class across from the attractive football player.

Both were shy, though. It took months of texting, seeing each other at parties and driving around together before Ludi summoned the courage to ask Weis to be his girlfriend. Her answer was an emphatic yes.

But that didn’t mean they wouldn’t face plenty of obstacles. Their young age was just the beginning. The biggest issue, of course, was Weis’ impending return home to finish high school in Germany.

Weis called her parents and persuaded them to change her flight so she could spend an extra month, as long as her visa allowed, with the boy she had fallen for.

Even after she returned home, Ludi and Weis made it work. Daily Skype calls made the thousands of miles between them shrink. From the start, they knew what they had was forever.

“You just know,” Weis said. “When you start a relationship that young, it doesn’t always work out, but with us it just worked out. ... We were just together.”

Their relationship has spanned a decade and crossed continents. After two years of dating long distance, Ludi moved to Germany to live with Weis and her family for a year after she graduated from high school. They since have moved back and forth between the two countries, and most recently lived three years in Berlin, where Weis studied biophysics at Humboldt University.

Ludi and Weis both enjoy biking everywhere they go, cooking and eating meals together and traveling. Above all, they share a common belief that it’s the little things in life that count.

“Standing in the light of your halo

I got my angel now”

At first, they didn’t think much of it.

Ludi began experiencing back pain in April, but the couple were still riding bikes and taking their dogs for walks. They assumed it was nothing serious.

Ludi’s severe pain and a lump finally prompted a trip to a German doctor, then the ER. When they realized they needed to seek further treatment in the United States, the couple booked an international flight right away.

Two weeks of tests later, doctors diagnosed Ludi with stage 4 clear-cell sarcoma. The rare form of cancer attacks the body’s soft tissue and primarily affects young adults between the ages of 20 and 40.

Things happened quickly after that. The couple went back and forth between Nebraska Medicine’s Fred and Pamela Buffett Cancer Center and Madonna Rehabilitation Hospital for stints of radiation, surgery and chemotherapy.

In May, the cancer attacked Ludi’s spinal cord, paralyzing him from the waist down.

Weis has been by his side through it all. She took a training class to be able to perform basic nursing duties so her husband could be more comfortable.

Amid the bustling hospital, the beeping monitors and machines, the blur of information and blood charts and decisions they’re forced to confront each day, Weis and Ludi have found small ways to enjoy the familiar things they always have loved.

They try to eat meals together. Weis walks outside and exercises while Ludi sleeps. They hope to get permission to take a road trip to a place where they can enjoy the outdoors.

Now, more than ever, they’re leaning on the same philosophy they have always held.

One day recently, Linda was sitting with her son in the hospital room. They had just received more bad news, but somehow, neither saw it like that.

“So Pia was his first miracle — now we just need that second miracle.”

When Elaine Cox came to, the medical receptionist she was speaking to — who happened to be more than 200 miles away — was still on the line, telling Cox she’d sent help.