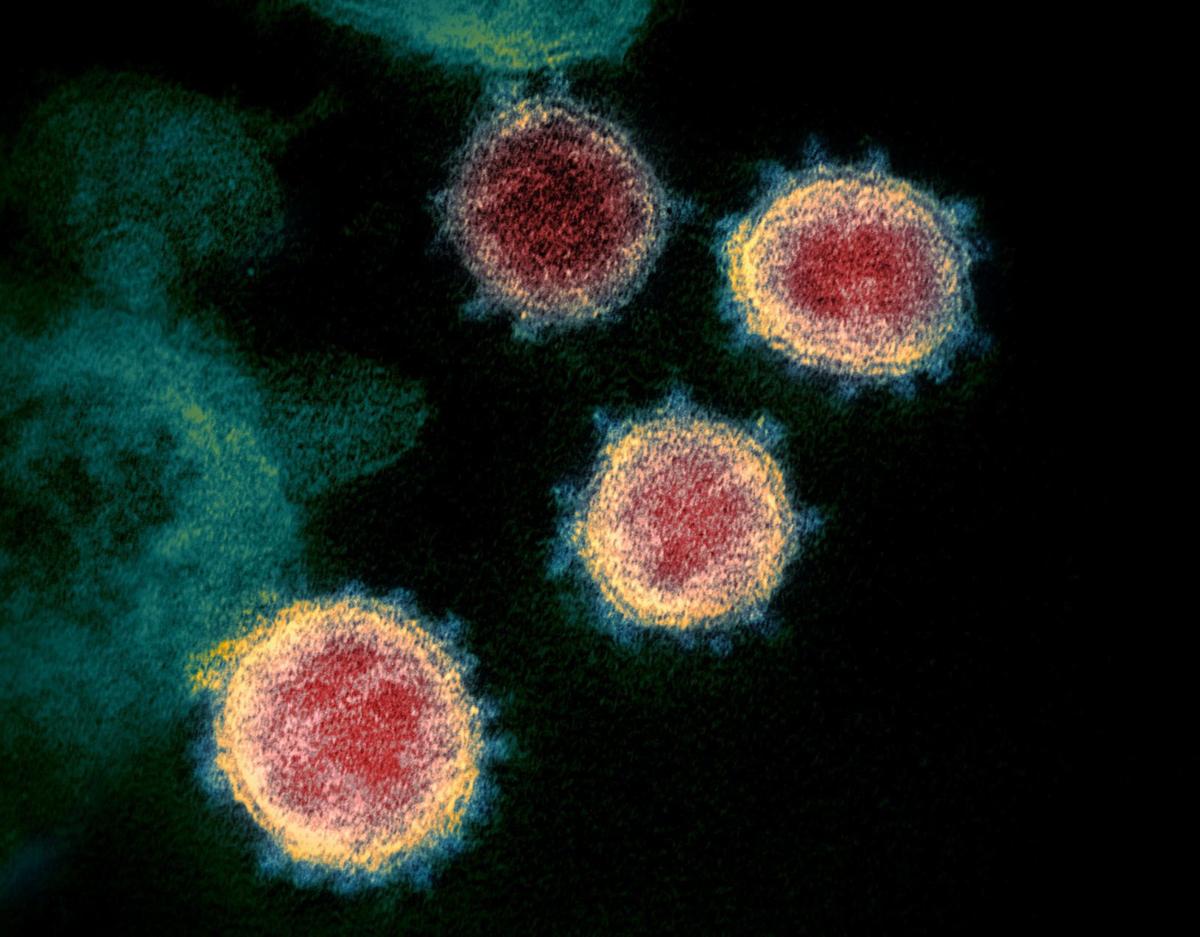 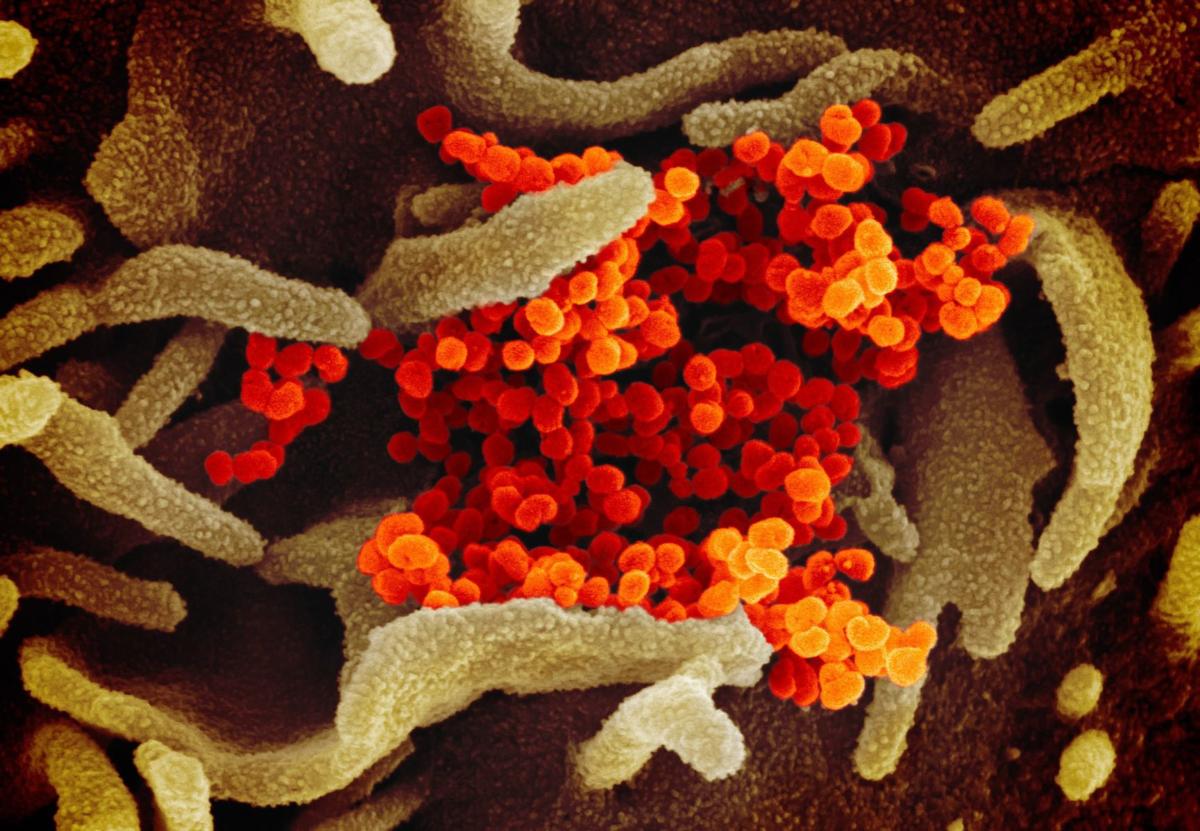 This image from a scanning electron microscope shows the novel coronavirus (the round objects) emerging from the surface of cells cultured in the lab. This coronavirus causes the disease known as COVID-19. The virus shown was isolated from a patient in the U.S. 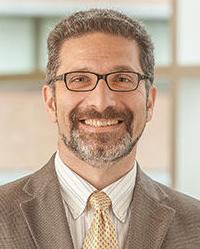 The University of Nebraska Medical Center has begun the first clinical trial in the United States of an experimental treatment for the new coronavirus.

The first participant to enroll in the trial is an American who was brought to the UNMC campus after being evacuated from the Diamond Princess cruise ship off the coast of Japan. The person volunteered to participate.

The participant is among 15 people from the ship who are under quarantine at UNMC — 13 in the National Quarantine Unit and two in the separate Nebraska Biocontainment Unit.

The first 13 arrived in Omaha on Feb. 17. The 14th landed Monday after being transferred from an Air Force installation near San Antonio. And a 15th arrived Tuesday night from California.

Clinical trial participants will be cared for in the biocontainment unit.

Clinical trials of the drug, an antiviral called remdesivir, also are ongoing in China, the center of the outbreak of the novel coronavirus.

The NIH-sponsored trial, in fact, is similar in design to one Kalil and other UNMC researchers helped devise for a different drug targeting Ebola virus disease during the waning days of the 2014 outbreak in Africa.

That Ebola drug trial, in turn, was essential to the development of a more recent NIH-sponsored trial that has found two new drugs to be effective against Ebola.

Researchers demonstrated during those trials that they could conduct clinical trials during the middle of outbreaks and adapt them as they sought to find the best treatments for patients.

All of that is helping researchers understand how to better respond during outbreaks, said Kalil, a professor at UNMC and infectious diseases physician with Nebraska Medicine.

“I think it’s fair to say that in the United States, this is probably the most rapid (clinical) trial initiation we’ve seen in American history,” he said. “The trial was just designed a few weeks ago in NIH, and we’re able to bring the trial here and get started right away, in a matter of weeks.”

Launching such complex trials typically takes months. “We don’t have the luxury of time,” he said. “We have to really get these drugs tested early.”

UNMC and Nebraska Medicine, its clinical partner, are the first to launch the trial because of their experience in biopreparedness, the researchers’ involvement with infectious diseases and the existence of the biocontainment unit on campus.

The trial’s design means it can be adapted to other treatments. If remdesivir is working, it can be used as a control to compare the effectiveness of the next drug to come along.

“There’s basically almost an unlimited (number) of medications that can be tested” with this design, he said.

The U.S. Food and Drug Administration has not yet approved any specific treatments for people with COVID-19, the disease caused by the coronavirus.

“We urgently need a safe and effective treatment for COVID-19,” said Dr. Anthony Fauci, the director of the National Institute of Allergy and Infectious Diseases.

The federal Centers for Disease Control and Prevention said on its website Tuesday that more cases of COVID-19 are likely to be identified in the coming days, including more cases in the United States. It’s also likely that person-to-person spread will continue to occur, including in the U.S.

Widespread transmission of COVID-19 in the U.S., the CDC said, would translate into large numbers of people needing medical care at the same time. Schools, child care centers, workplaces and other places for mass gatherings may experience more absenteeism. Public health and health care systems may become overloaded, with elevated rates of hospitalizations and deaths.

Fauci noted the antiviral drug has been administered to some patients with the condition. But researchers do not have solid data to indicate that it can improve patient outcomes.

“A randomized, placebo-controlled trial is the gold standard for determining whether an experimental treatment can benefit patients,” he said.

Participants in an NIH-sponsored trial must have a laboratory-confirmed infection with the new coronavirus and evidence of lung involvement, including abnormal chest X-rays; rattling sounds when breathing, with a need for supplemental oxygen; or illness requiring mechanical ventilation.

Those with confirmed infection who have mild, coldlike symptoms or no apparent symptoms will not be included in the study, the NIH said.

Kalil noted that between 80% and 90% of people with the disease have mild cases. It’s not advisable to treat them with intravenous drugs.

“The goal here is really trying to help the people that need it the most,” he said.

Eligible study participants will be randomly assigned to receive the experimental drug or a placebo. The study is double-blind, meaning researchers and participants won’t know who is receiving the drug or the placebo.

Either the drug or the placebo will be administered intravenously for the duration of hospitalization, for up to 10 days total.

Clinicians will monitor participants and assign them daily scores based on a scale that considers such factors as temperature, blood pressure and use of supplemental oxygen.

Participants also will be asked to provide blood samples and nose and throat swabs about every two days. Researchers will test those specimens for the coronavirus.

Keep informed of all the developments with coronavirus with The World-Herald's complete coverage.

Another American with coronavirus has been brought to Nebraska

The person is the spouse of one of the 13 people who arrived in Omaha Feb. 17 for monitoring and treatment of the coronavirus.

Don't take quarantine sitting down: How to stay fit during the pandemic