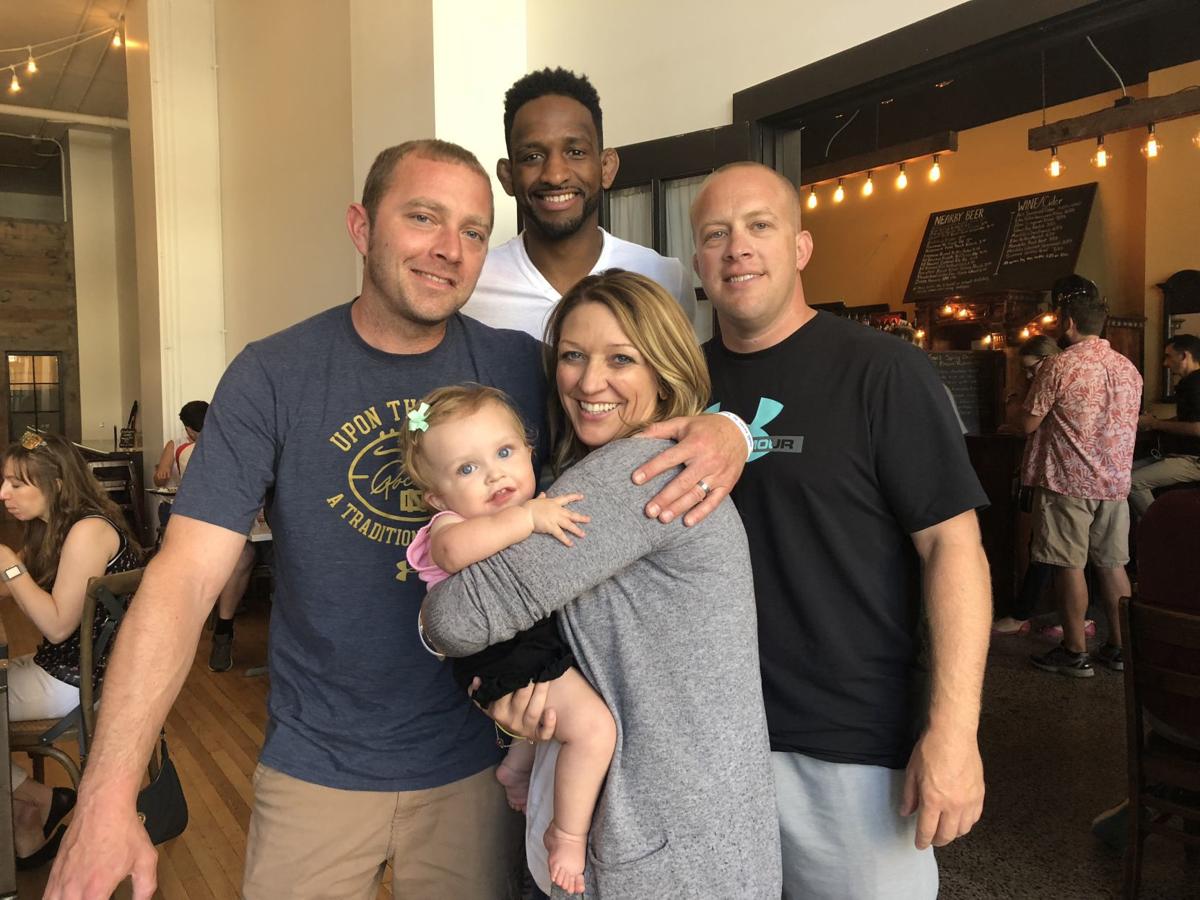 Neil Magny, a UFC welterweight, donated $15,000 to the family of Presley O'Doherty. The money will go toward medical expenses for Presley, who has spinal muscular atrophy. Back, from left, are Bill O'Doherty, Neil Magny and Leister Bowling. In front, Lacy O'Doherty holds Presley. 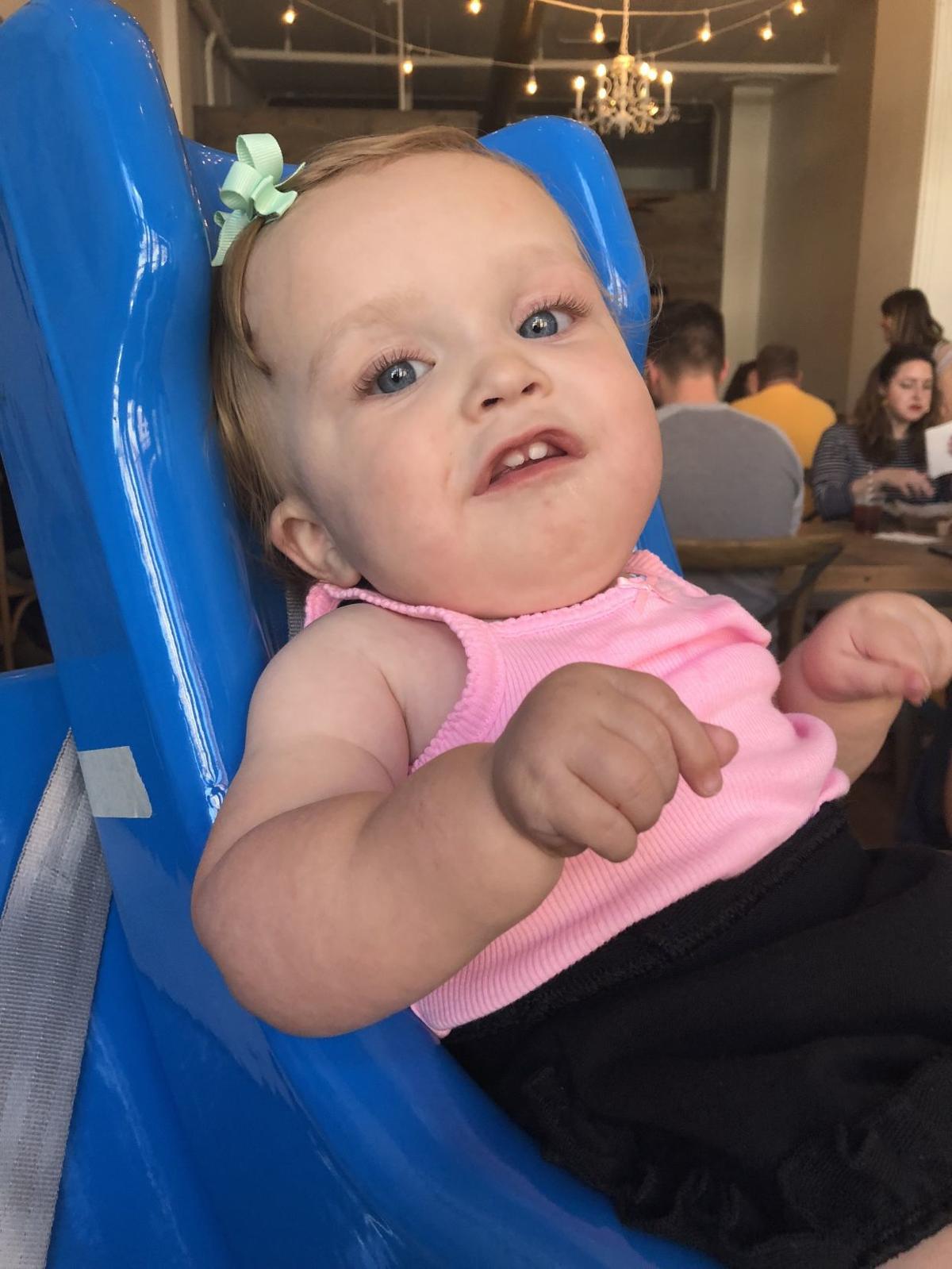 During his last fight, Neil Magny was grateful to be competing.

But the Denver fighter had more on his mind than just beating his opponent. He was thinking of Presley O’Doherty.

Magny made a promise to donate a hefty sum to the Omaha baby’s family for her medical expenses. Presley has a rare genetic disorder that is often fatal.

The UFC welterweight nabbed the victory while in Liverpool, England, and on Friday, he flew into Omaha to deliver a $15,000 donation, out of his winnings, to the O’Doherty family.

If the UFC is able to find me an opponent for May 27th. I will donate $15,000 of my fight purse to help this little girl and her family get the care that she needs. https://www.gofundme.com/fighting-sma-with-presley-mae

It came as a surprise to the 16-month-old’s parents, Lacy and Bill O’Doherty, who don’t have ties to Magny.

“You don’t know what to say,” O’Doherty said. “It’s hard to find words to express the gratitude. You ... can’t say ‘thank you’ enough times.”

Presley was diagnosed with spinal muscular atrophy when she was 3 months old. At her 2-month checkup, the pediatrician noticed low muscle tone.

The baby struggled to lift her arms off the ground and couldn’t hold her head up. A neurologist quickly diagnosed her with spinal muscular atrophy.

“Fear trumped all other emotions,” O’Doherty said. “I just wanted her to live and not feel stuck in her own body.”

The genetic disorder is rare and patients often don’t live past 1 year old, said Dr. Geetanjali Rathore, a neurologist with Children’s Hospital & Medical Center. In a person with spinal muscular atrophy, the body doesn’t produce enough protein needed for certain nerve cells in the spinal cord, said Rathore, who treats Presley. It eventually leads to muscle loss. In addition to muscle weakness, it can cause difficulty breathing and swallowing.

Presley has the most severe type, but she’s started taking a new medication, administered through the spine, that works to stop progression of the disease.

“I’m scared to ask the question,” O’Doherty said of her daughter’s prognosis. “I assume she’s always going to have challenges.”

So far, she’s handled it well, and Rathore said they’ve seen slight improvements. Doctors are optimistic, but because the drug is so new, it’s hard to project the long-term outcomes.

Cognitively, Presley is just like her peers. The little girl, with big blue eyes and curly blonde hair, is stubborn. She’s becoming more curious and observant of her environment, her mom said. But her favorite thing is having an audience.

Presley had that audience Friday as she and her parents had lunch at Block 16 with Magny. Sporting a green bow in her curls, Presley sat at the head of the table. She entertained her crowd by tossing paper straws and plastic toys to the floor.

Magny flew into Omaha for the day solely to deliver his donation to the O’Doherty family. The fighter, who was out for nine months last year with a neck injury, said he’s grateful to give back.

He was accompanied by former coach Leister Bowling. Bowling, who now lives in Colorado, has ties to the Millard area. He posted a link to Presley’s GoFundMe page on Facebook and Magny jumped on making a donation.

“I’ve said it time and time again. Neil Magny is the best person I know,” Bowling said. “I have two young boys, and he’s the guy I want them to look up to.”

The in-person delivery meant a lot to Presley’s parents, too.

“It’s a great opportunity for us to express, in person, our appreciation. It shows how much he does care and how much (Presley) matters,” O’Doherty said as she choked back tears.

State troopers, LifeNet team up to get lifesaving medicine 540 miles from Omaha to Colorado

“Everybody we contacted understood the urgency,” Lt. Matt Sutter said. “It was truly all hands on deck.”

5 things to know before you enroll, plus an alternative designed especially for Nebraskans age 65 and younger.