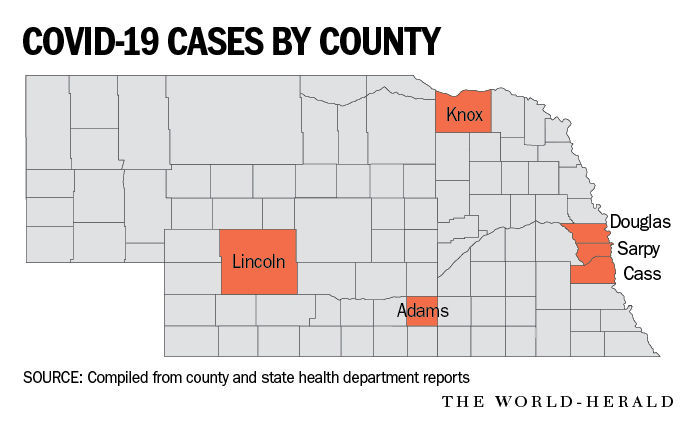 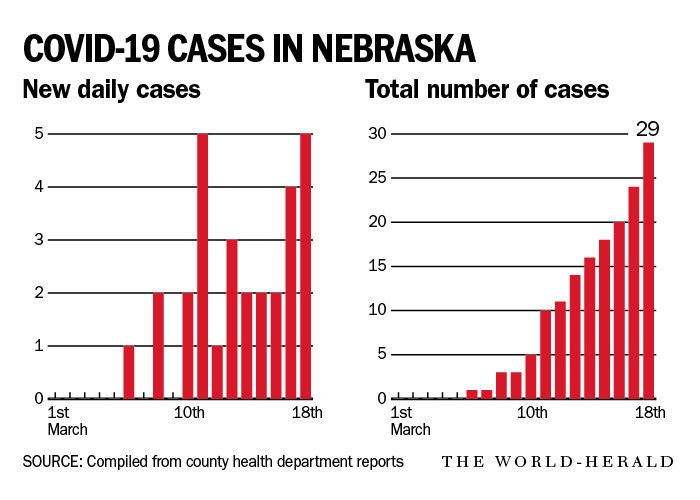 LINCOLN — Nebraska Gov. Pete Ricketts on Thursday imposed a limit on public gatherings in Cass, Douglas, Sarpy and Washington Counties in response to the spread of the novel coronavirus disease.

The directed health measure, in effect until April 30, requires restaurants and bars in those counties to close their dining areas immediately and move to takeout, delivery or curbside-only service until further notice. The measure also restricts alcohol sales to carryout and delivery only.

A separate executive order gave restaurants flexibility with their liquor licenses, allowing them to sell alcohol for consumption elsewhere, including sales in a drive-thru lane.

Four additional cases were confirmed by officials Thursday. They include a woman and man in Lincoln County, a Nemaha County man and a Sarpy County man with underlying health issues who is being hospitalized.

At We’ll Smoke You BBQ in Gretna, co-owner Jackie Burke already had shut down the eatery’s dining room when a reporter called around 2:30 p.m. Thursday. Even before the governor’s announcement, she had been limiting diners to no more than 10.

“As a business owner, this scares the bejesus out of me,” Burke said. “Thank God, knock on wood, we have a whole lot of loyal customers who won’t be sad if they have to take their food to go.”

Burke said that one of her two part-time employees had said she wasn’t coming in until after the coronavirus outbreak had passed. But the loss of weekend dining room business will hurt, she said.

Another Gretna business owner, who spoke on the condition that she not be named, called the order “dumb.”

“If you want to be open, you should be allowed to be open,” she said.

Fortunately, she said, her business had a good day Thursday providing takeout meals.

“As long as they keep doing that, that’s huge,” she said.

The order also directs schools in the counties to operate without students in the buildings through April 30.

Violating the governor’s order could lead to criminal or civil action. The measure requires local law enforcement and health officials to help with enforcement.

A link to the directive can be found here.

Ricketts issued the measure one day after the Douglas County Health Department announced a second community transmission case of COVID-19, the disease caused by the coronavirus. Community transmission means the case could not be linked to a person’s out-of-state travel or to any other known case.

Douglas County health officials already had issued a public health order prohibiting all public gatherings with more than 10 people through April 30. That move made guidelines on crowd size enforceable by law.

Brenda Gutschow, whose family owns the Dairy Queen and Fernando’s Cafe & Cantina in Blair, said she and her family are “still in shock” about the governor’s order.

They had a feeling an order might be issued for Washington County, and they shifted Thursday to carryout and curbside service. The biggest hurdle is figuring out how to help the employees who have lost hours and likely will lose jobs.

Their Dairy Queen usually operates with a staff of 12 to 15, and Fernando’s has 21 employees. Both businesses now operate with two employees at a time, often a cook and a manager.

“It’s breaking my heart, trying to figure out how to help them,” Gutschow said. “We’re a family business, and we consider our employees family.”

The same was true at the Country Bar & Grill in Plattsmouth, in Cass County, where owner Erin Benson shifted her bar and restaurant to a carryout operation after Thursday’s order.

Benson no longer needs waitresses for a business where no one can sit. The weekend breakfast and Friday night crowds aren’t coming for a while, so she and they have to figure out what to do.

“We are probably going to have to lay a few people off,” she said. “We’re doing OK today, but tomorrow might be different.”

Both owners said Ricketts did what he needed to do for the safety of their customers and staff.

Tiffanie Welte, grades 6-12 principal of the Weeping Water Public Schools, said her district was anticipating the order. District officials had made the decision to close this week.

The district, in Cass County, has about 330 students in K-12 and has a one-to-one technology program that Welte said puts the district in a very good place to pick up with distance learning.

“We are rolling with things, rolling up our sleeves and doing the best we can,” Welte said.

Andrew Farber, superintendent of the Louisville Public Schools, said his district is so close to Omaha that he anticipated that it would be affected by the order.

His district, also in Cass County, already had shut down last Sunday evening as a precaution.

District officials would rather be safe than sorry, Farber said., noting they want to help limit disease transmission to prevent medical services from being overwhelmed.

Sarpy County Board Chairman Don Kelly said it’s a difficult time for everyone.

“We understand the hardship these changes will place on families and businesses,” he wrote in an email, “and so we encourage people to patronize Sarpy County businesses in any way they can safely, by ordering out food, purchasing gift cards or other means.”

It sets a strict 10-person limit on patrons, customers and other members of the public in places such as theaters, houses of worship, gyms, social clubs, salons and at social gatherings, including weddings, funerals, concerts and athletic events. The limit applies whether the gathering is indoors or in a confined outdoor area.

It also does not apply to day care facilities, which were instructed to follow guidance from state health officials on the Nebraska Department of Health and Human Services website.

Ricketts said he doesn’t expect to impose additional limits on workplaces. However, they were directed to increase diligence in disinfecting exposed surfaces.

Limits on public gatherings remain voluntary in the rest of Nebraska for now. But the Governor’s Office said additional directed health measures will be issued if community cases occur outside of the four-county area covered by this order.

The federal Centers for Disease Control and Prevention has said school operations can accelerate the spread of the coronavirus. The agency has advised governors with evidence of community transmission to close schools in affected and surrounding areas.

As of Thursday afternoon, 154 of the state’s 244 school districts had notified Nebraska Department of Education that they are closed. Eighty private and parochial schools had closed. More were expected to announce closures Friday.

Starting as soon as Friday, doctors will consult with their patients and ultimately decide if a procedure can be safely delayed "without risk to life or limb."

County lines, city borders, state borders, for the most part are artificial boundaries. When a declaration was made for Omaha, the other counties should have been included. For that matter with all the crossing back and forth with the only "natural" boundary - the Misssouri River - Council Bluffs should have been included in the declaration - but that would have required all kinds of cumbersome political coordination.

I can't understand local doctors talking about difficulties in testing because tests are limited. A couple of weeks ago, Governor Rickets said we can do about 200 tests a day here in Omaha alone but so far we've only done about 300 tests. Why are't they testing to their maximum? It seem they could have done 2800 tests in the past two weeks? The government also keeps saying that we have 4M tests available right now so why aren't we testing the heck out of people in NY, SF and Seattle? Everything I hear from the government and healthcare providers doesn't fit the fact pattern.

I understand the reasoning. but, it appears violate the U.S. Constitution.

Ricketts lack of consistent leadership with the current crisis disappoints me. I had thought better of him. He seems a bit overwhelmed or confused by it all, or at least lacks a clear, rational vision.

Tom Wilson: Are those rhetorical questions? What are the "fact patterns?" With respect to the facts, numbers and statistics we are being given, the president has lied about this outbreak from the beginning, so you can't trust him (That was obvious from the start)? The state run media outlet, Fox News Channel, has also lied from the beginning about this and continues to do so, so don't listen to them. Tony Fauci, director of National Institute of Allergy & Infectious Disease has been a straight shooter from the get go. Try to pay attention to what he has to say. The front line workers (i.e. nurses, doctors, etc.), now why would they lie? Pay attention to what they are saying. Remember that this whole situation has been fluid from the beginning, so you have to obtain your information from various sources and fact check. That's your reality check!

For Omahan Allen Darell, Lions Foundation's mobile screening unit is a natural extension of a life shaped by community service.