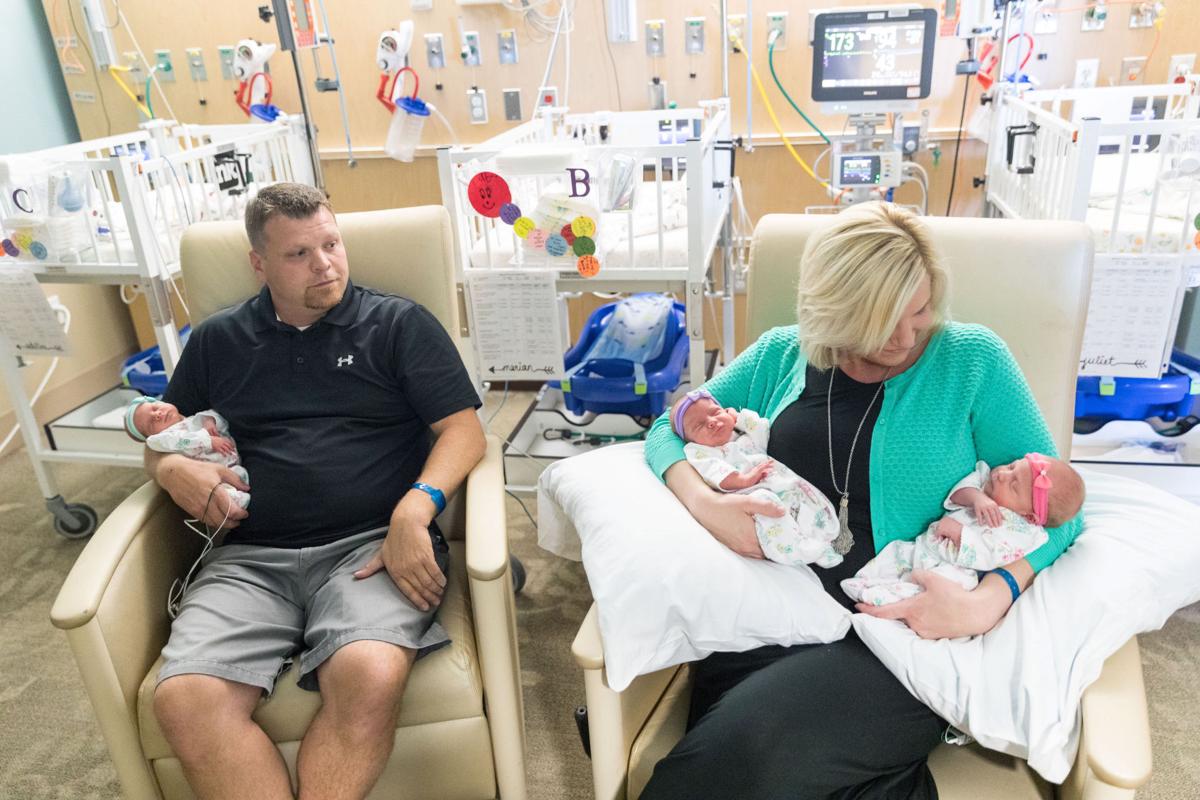 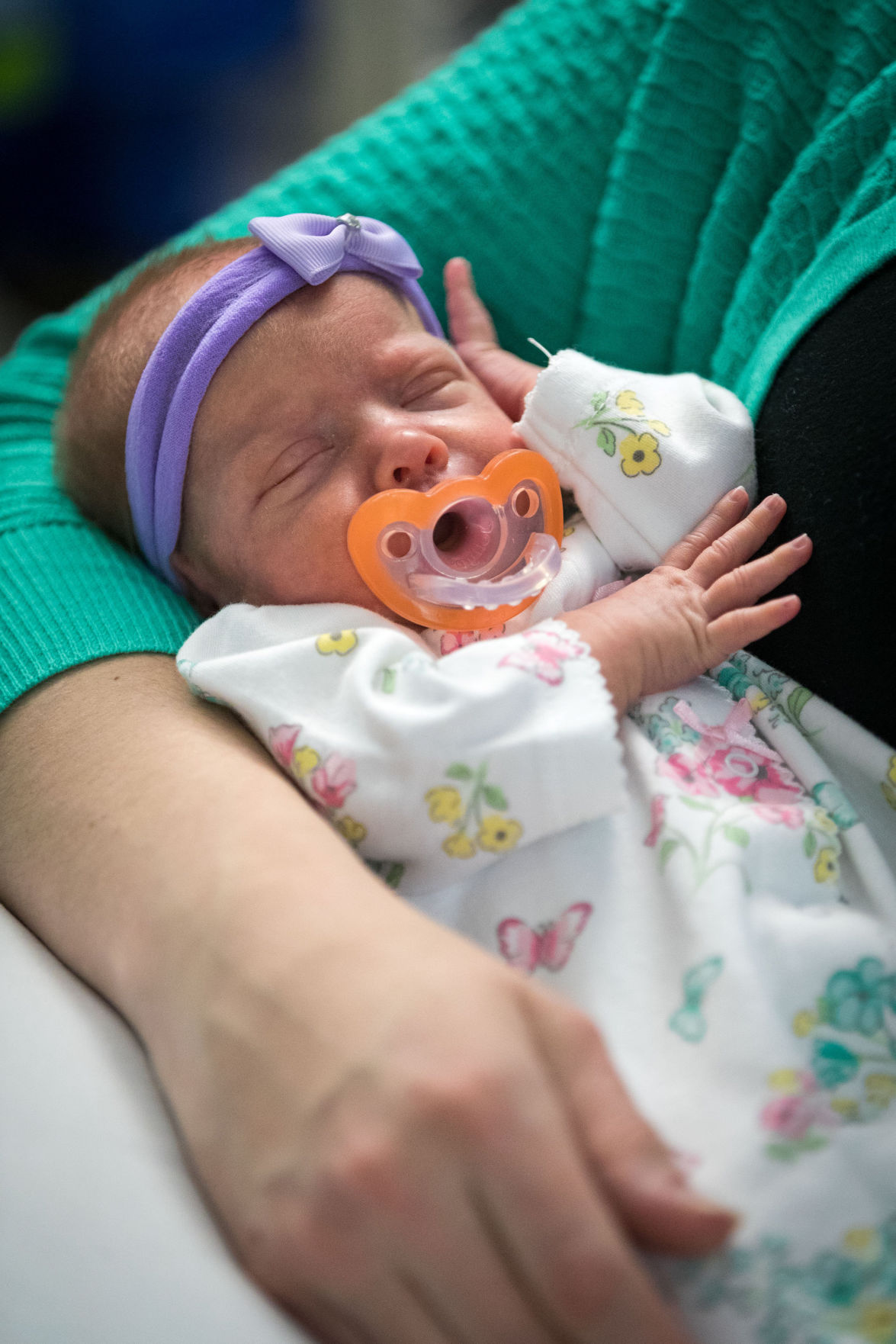 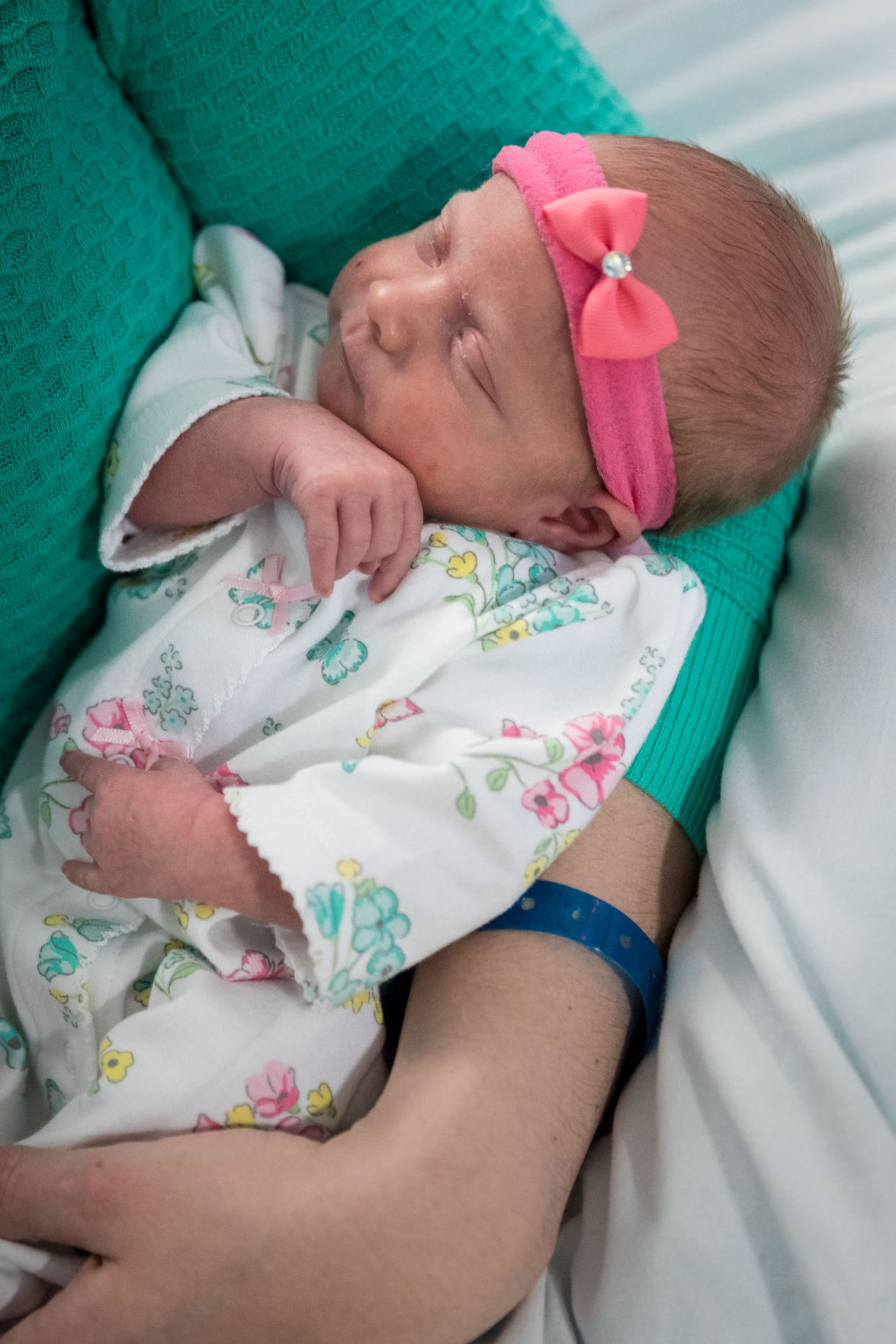 Juliet was born 4 pounds. The girls were born on June 23, via C-section. 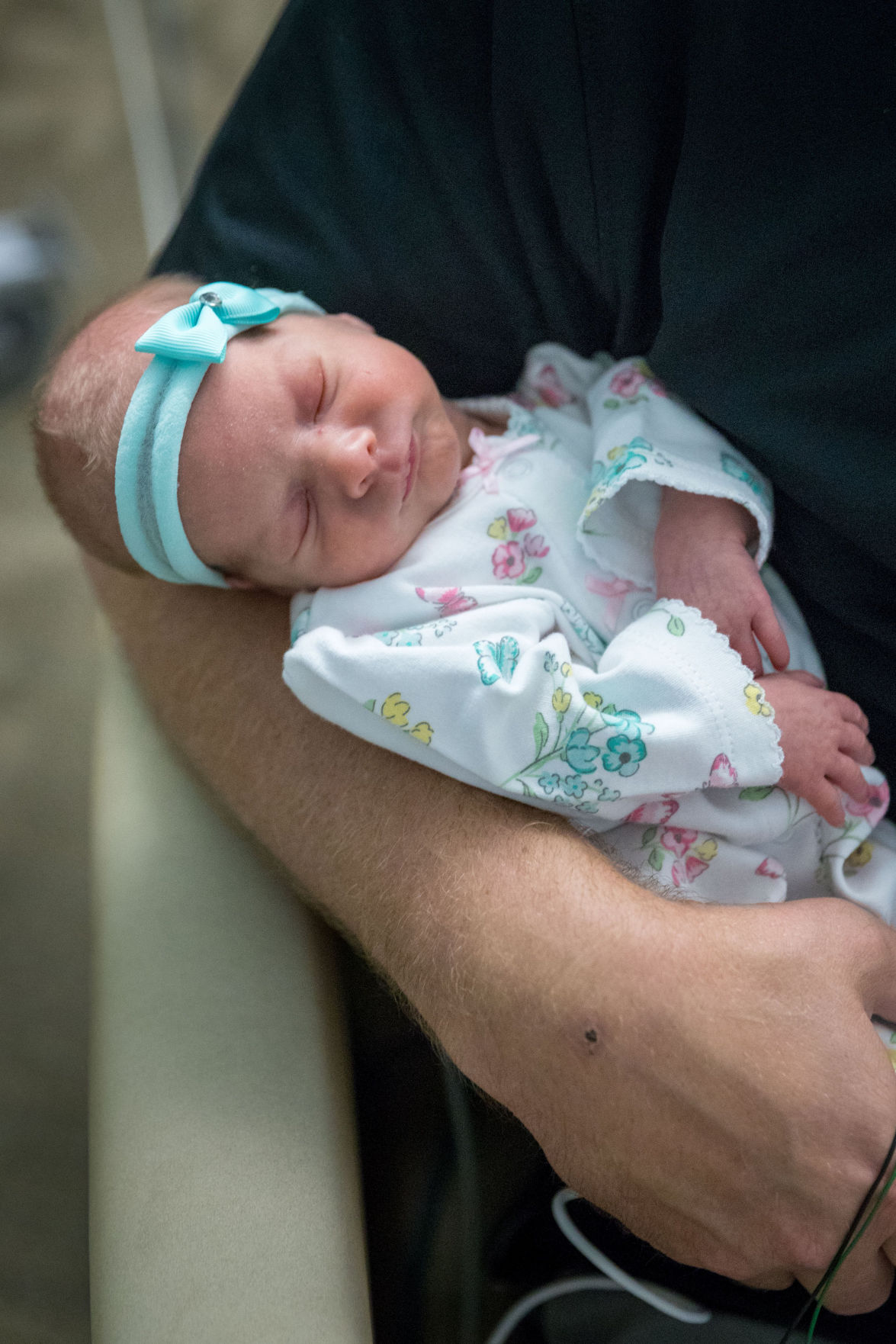 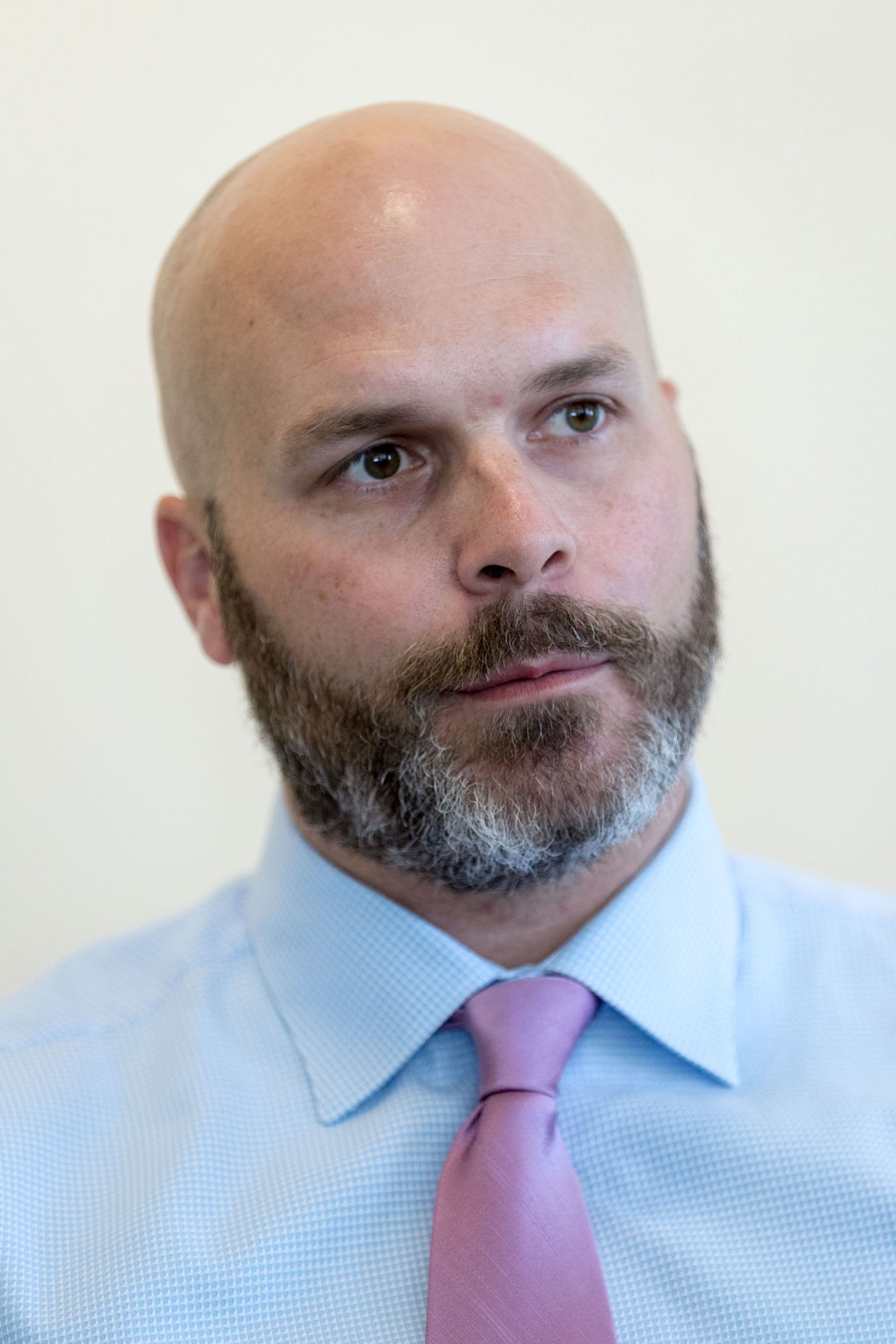 Dr. Brendan Connealy, a maternal-fetal medicine specialist, discusses the Teten triplets, who were born on June 23. The odds of identical triplets, born to Lindsey and Derek Teten of Nebraska City is about one a million.

Juliet was born 4 pounds. The girls were born on June 23, via C-section.

If Derek and Lindsey Teten had been expecting one baby, their two-bedroom farmhouse would have been the perfect size. Derek might have even landed that man cave in the basement.

Even with twins, the plan could have worked.

But when the Nebraska City couple learned they were expecting triplets, dad’s dreams of his own space went out the window.

The Teten triplets, born in late June, are identical and were conceived without fertility treatments.

It was a shock, the parents said, and it shocked doctors, too.

In fact, they called the odds of such a pregnancy one in a million.

Of almost 4 million births in the United States in 2015, fewer than 4,000 were triplets, according to the most recent data from the Centers for Disease Control and Prevention. Nebraska typically sees about 12 sets of triplets each year, according to a spokeswoman with the Nebraska Department of Health and Human Services.

The Tetens had been trying to get pregnant for eight months. A home pregnancy test came back positive in December.

As she looked for any more, Derek joked, “No, stop. Three is good.”

Dad’s dream of a big screen in the basement was scratched. Instead they had to remodel their home to make room for the growing family.

During the pregnancy, Lindsey went to appointments at the hospital more frequently than moms expecting singles — every other week. Doctors monitored her blood pressure and the growth of the babies.

The pregnancy had few complications and Lindsey, a psychiatric nurse practitioner, continued working up until two weeks before giving birth.

She was hospitalized four days before delivering the triplets via cesarean section on June 23.

On average, triplets are delivered around 33 weeks. The Tetens were delivered just shy of 32 weeks because of Lindsey’s rising blood pressure and one baby’s lagging growth.

Mom and dad named the girls Juliet, Marian and Adeline.

The babies were light; it felt like holding nothing, Lindsey said. One baby weighed 4 pounds. The other two weighed 3 pounds, 15 ounces and 3 pounds, 4 ounces.

The triplets are progressing ahead of schedule, said Dr. David Minderman, a neonatologist. They’ve met milestones, such as eating and breathing on their own, and regulating their temperature. To be released, they have to be able to breathe while strapped in their car seats.

Minderman expects them to go home in about two weeks.

Neither Lindsey, 30, nor Derek, 43, have multiples in their families. The girls are the first grandchildren on Lindsey’s side. Family support will be key in adjusting to parenthood, mom said.

Lindsey said they will try to remember one thing once the couple takes their bundles of joy home: Be patient.

“That’s my mantra for these girls,” she said.

Telling the trio apart is easy while the babies are in their assigned hospital beds, dad said. They’re marked A, B and C. Once they go home, the Tetens will use a color-coded system. Juliet will wear pink, Marian will wear purple and Adeline will wear teal.

The babies started wearing their assigned shades in the hospital. Derek and Lindsey held the squirming newborns in their neonatal intensive care unit room Friday. The girls, weighing between 4½ and 5½ pounds, wore matching floral onesies and headbands in their respective hues.

“For anyone, it’s a blessing. To have three, it just blew our minds,” Lindsey said. “The rest of our life is going to be these girls and that’s pretty cool.”

'Uncharted territory': Identical triplets were a first for doctors and Omaha couple

Of nearly 4 million births in the United States in 2013, fewer than 4,500 were triplets, according to the most recent data from the Centers for Disease Control and Prevention.

Don't take quarantine sitting down: How to stay fit during the pandemic