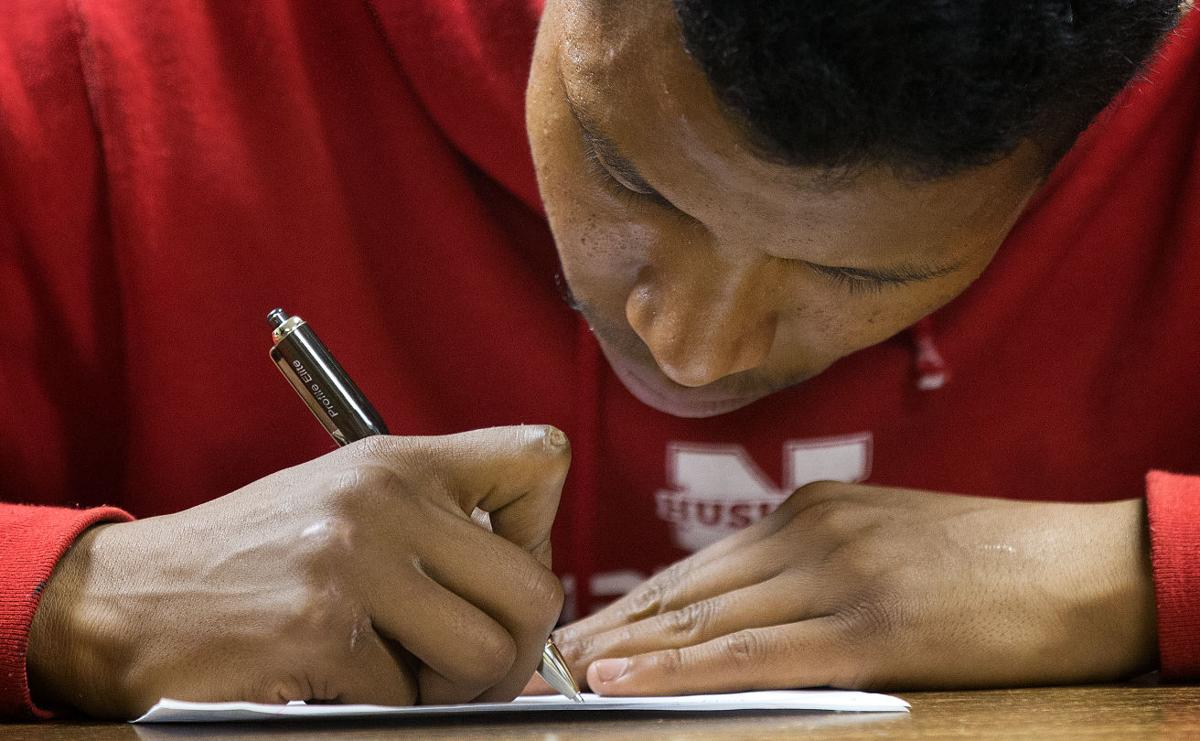 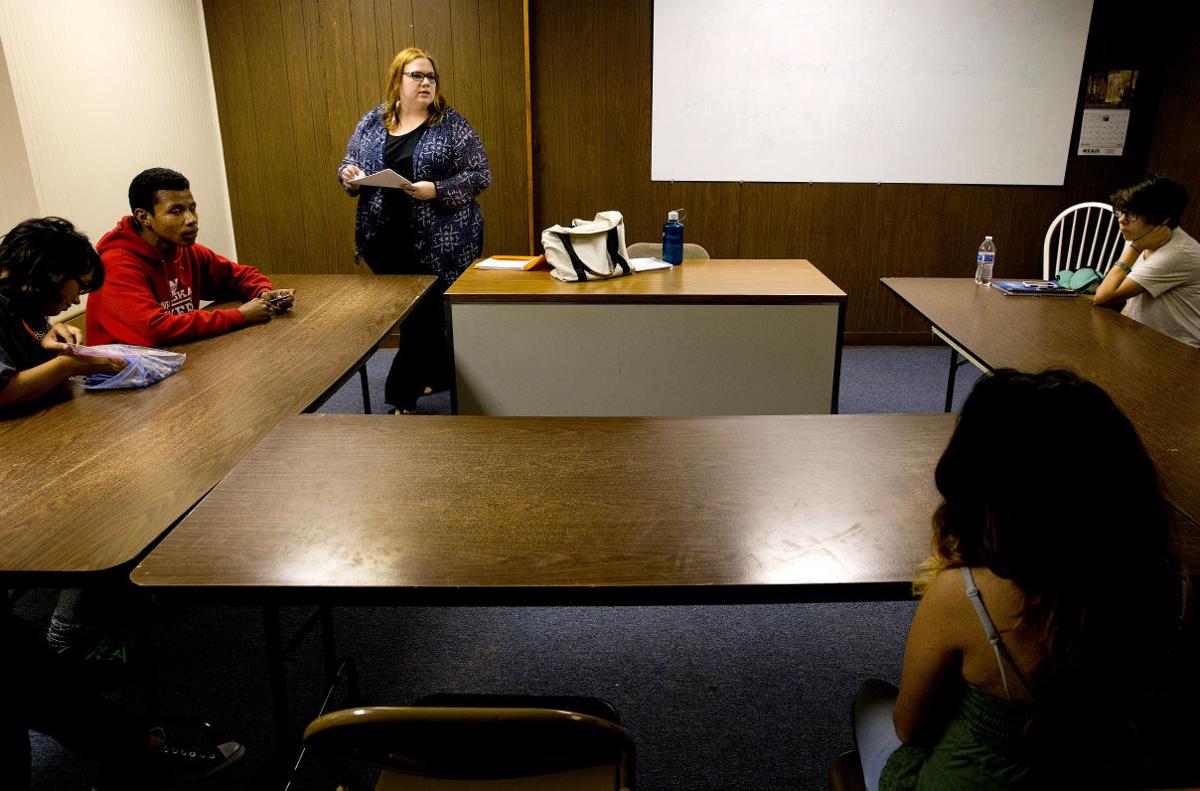 Emily Borgmann, upper left, leads a poetry class for at-risk teens. Borgmann, who herself struggled with a difficult childhood and teen years, began the classes as part of her graduate studies at UNO. 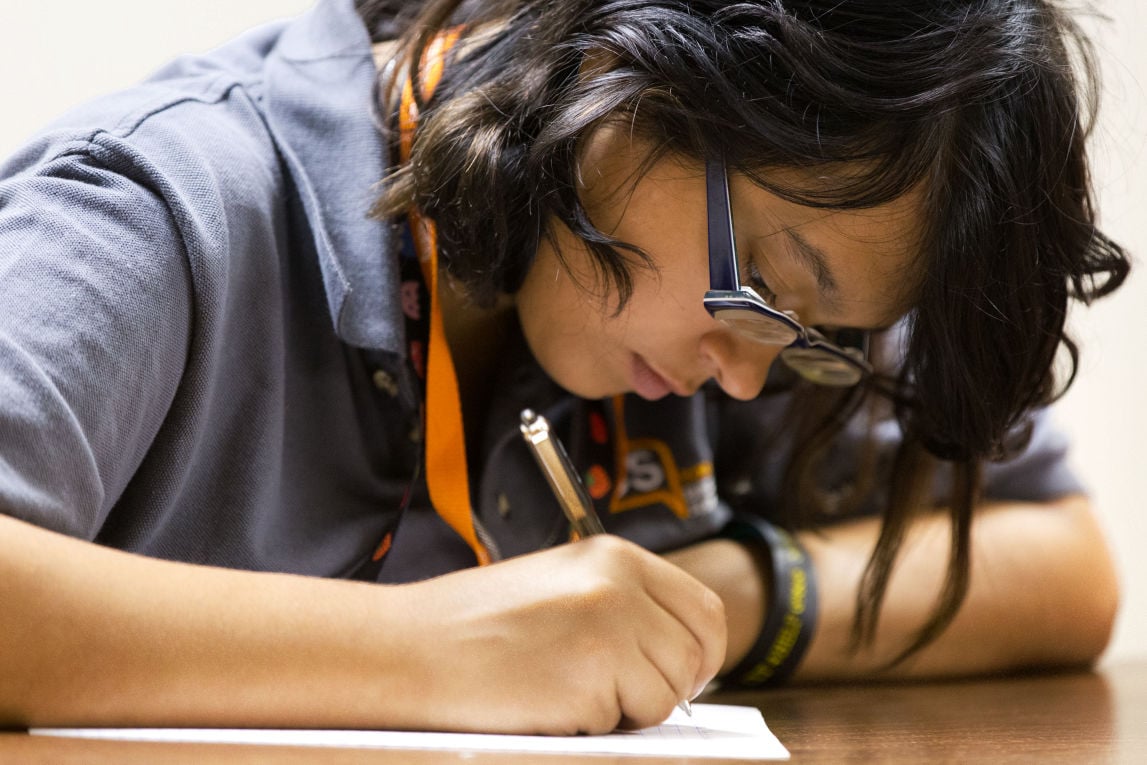 Jeannine Harvey, 21, writes during a poetry class at the Youth Emergency Services’ Street Outreach Center. Harvey, like many teens the nonprofit sees, has dealt with abuse, drugs, alcohol and homelessness from a young age.

Emily Borgmann, upper left, leads a poetry class for at-risk teens. Borgmann, who herself struggled with a difficult childhood and teen years, began the classes as part of her graduate studies at UNO.

Jeannine Harvey, 21, writes during a poetry class at the Youth Emergency Services’ Street Outreach Center. Harvey, like many teens the nonprofit sees, has dealt with abuse, drugs, alcohol and homelessness from a young age.

Jeannine Harvey wrote her first poem the same year she began cutting herself. She was 9.

She sought help at 19, but it didn’t last. She left the program and lived on the streets. Some nights she slept under the 10th Street Bridge, other nights in the Gene Leahy Mall, other nights in an abandoned building she found with friends.

One night she woke up and realized she didn’t want this life. She found herself at Youth Emergency Services, a nonprofit that serves homeless kids, ages 12 to 21, and kids at risk of becoming homeless. She surrounded herself with more positive influences. She decided to stop hurting herself. She quit drinking, gave up drugs. She stopped cutting herself.

On Thursday, Harvey will read three poems at the University of Nebraska at Omaha during the second installment of a new reading series called “Introducing.” The series presents three writers per event — two published authors and one client of Youth Emergency Services.

Harvey volunteered to be that client, and as such, she’ll share a podium with Lee Ann Roripaugh, the poet laureate of South Dakota. She’s not nervous as much as anxious to impress. The other poets on the program represent what Harvey wants to become; the reading feels like her chance to play catch with the pros.

One night earlier this month Harvey and five other young adults sat around a table in a makeshift classroom at Youth Emergency Services’ Street Outreach Center near 26th and Harney Streets. They passed around a Ziploc bag of cheap pens and a stack of paper and for 10 minutes sat in silence and wrote.

When time was up, a UNO graduate student named Emily Borgmann asked for readers. A 22-year-old nicknamed Smiley led things off, followed by Harvey, and when each finished their poems, the others applauded.

The mood was light, even goofy on occasion, and yet strikingly offset by the themes put down on paper. Poems about abuse, parental abandonment, attempted suicide.

“I write poetry because it’s my way to get out all I’ve been through,” Harvey said afterward. “It’s finally letting it go. ... Some of my poems I don’t read because I’m not ready to let go.”

According to Youth Emergency Services, there are more than 300 homeless youth on any given night in Omaha, and many more on a path to homelessness. There are recovering addicts barely out of their teens. There are gay kids who feel shunned by their families and transgender kids who feel shunned by everyone and more than a few kids who will say with conviction that without Youth Emergency Services they’d be dead by their own doing.

It is a modest operation with a big mission. It offers various resources and perhaps most critically, a way to get off the street, if only temporarily. The organization’s cramped outreach center houses a food and clothing pantry. It provides meals and laundry facilities and access to a shower.

On Wednesdays, the center provides dinner on the condition that kids who show up participate in that night’s group session. Some nights that means talking about STD prevention or how to apply for a job. When Borgmann visits with her pens and paper, they write.

Borgmann didn’t intend to start a reading series. The group was the plan. She wanted to teach writing, but the MFA program at UNO didn’t offer teaching assistantships, so she created the opportunity herself.

She approached Youth Emergency Services. The partnership made sense to her, even if it never fully sinks in with some of her students. The tendency is to see her as the authority figure at the front of the room — a perception Borgmann tries her best to dissolve — but the fact is she’s been there. If it might help a student, Borgmann will reveal the pages of her own life. How she suffered sexual abuse before she turned 5. How she was a cutter. How she identified as queer, and how her family rejected her. How she became an alcoholic and then a recovering alcoholic before she reached drinking age, and how she’s struggled with mental illness most of her life.

Through it all, she wrote. She put her pain onto paper. Writing didn’t make it go away, but it created a distinction. It made the pain something separate from herself.

A year and a half after she got sober, Borgmann moved to Omaha and started taking classes in UNO’s Writer’s Workshop.

“I didn’t see it as something I would finish,” she said of her bachelor’s degree. “I just needed to fill my time.”

She found teachers willing to help, including one who encouraged her to pursue graduate school. Now she stands at the front of the room as a published poet and perhaps just as important, a peer.

The first “Introducing” reading took place in September on the UNO campus. The program featured two published authors, Karen Gettert Shoemaker and Miles Waggener, but leading things off was a quick-witted 23-year-old calling herself Burnadette.

A crowd of about 30 people listened as Burnadette read a short story called “Unaware.” The story concluded with a narrator revealing that the young woman in the story, preyed upon at a bar, became a victim of sex trafficking.

It was the sort of postscript that appears at the end of a made-for-TV movie, and in fact, Burnadette considered such a movie while writing the story: the 1990 drama “Daughter of the Streets” about a teen lured into prostitution by a pimp played by John Stamos. It was a sardonic bit of inspiration, taking the unintended humor of “Daughter of the Streets” — she wanted her bad guy to convey Stamos’ “seductive saunter” — while simultaneously elevating it to something greater than itself.

Burnadette first sought out Youth Emergency Services as a bullied and depressed 15-year-old. Years later, after too much partying and a habit of putting herself in a position to be put into bad situations, she returned. She discovered friends and mentors and scored an internship with the organization.

She started looking forward to writing group. She found in Borgmann someone who listened to her unusual stories with an open mind, who encouraged her.

“I tend to gravitate to depressing and sad things, because I’m very good at expressing those emotions,” she said. “I don’t know why, but it’s always sad.”

Except lately she’s been working on a new kind of story.

“The world is coming to an end, but they can’t get out of the forest to save the world,” Burnadette said.

Do they find a way to escape? Or do they remain locked in the woods, the world spiraling into oblivion?

That’s where she’s stuck. Sometimes she thinks it should be left as a cliffhanger, but she also realizes that’s kind of a cop-out. Part of her feels the story needs an end.