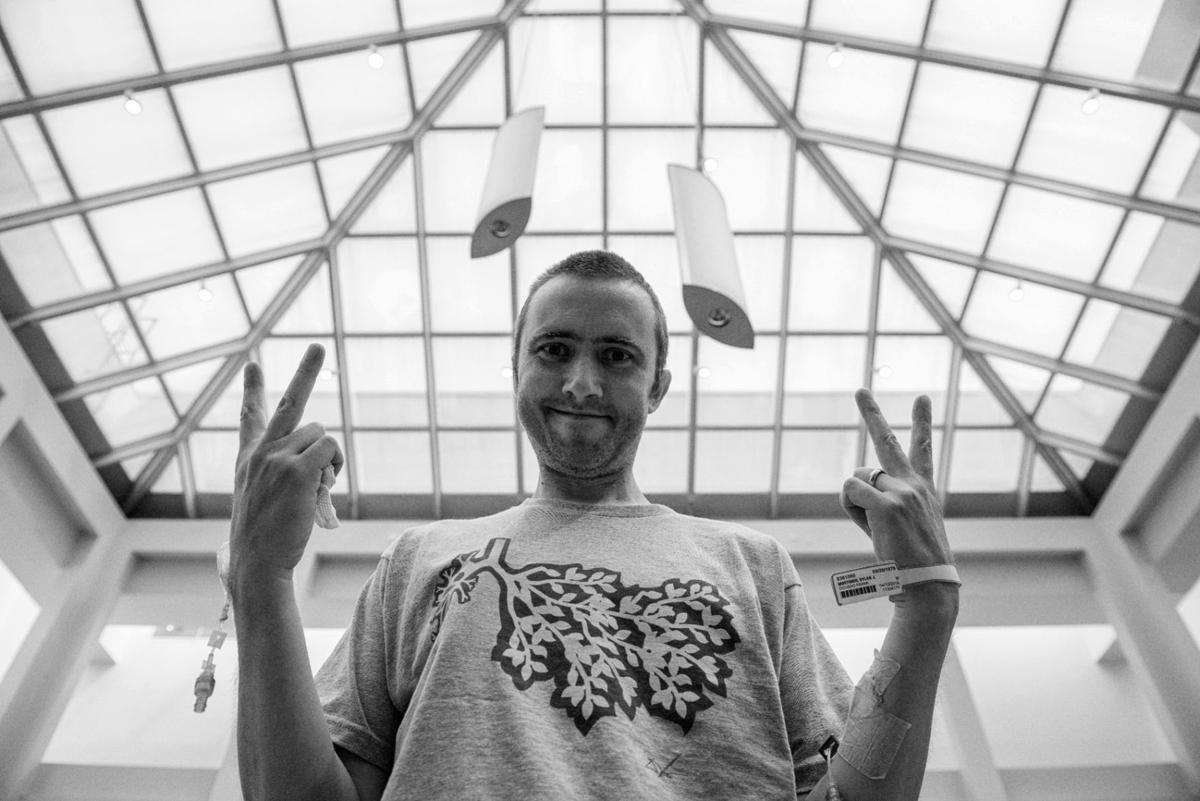 Dylan Mortimer poses for a photo inside NewYork-Presbyterian Hospital in New York City after his second double-lung transplant in January 2019. 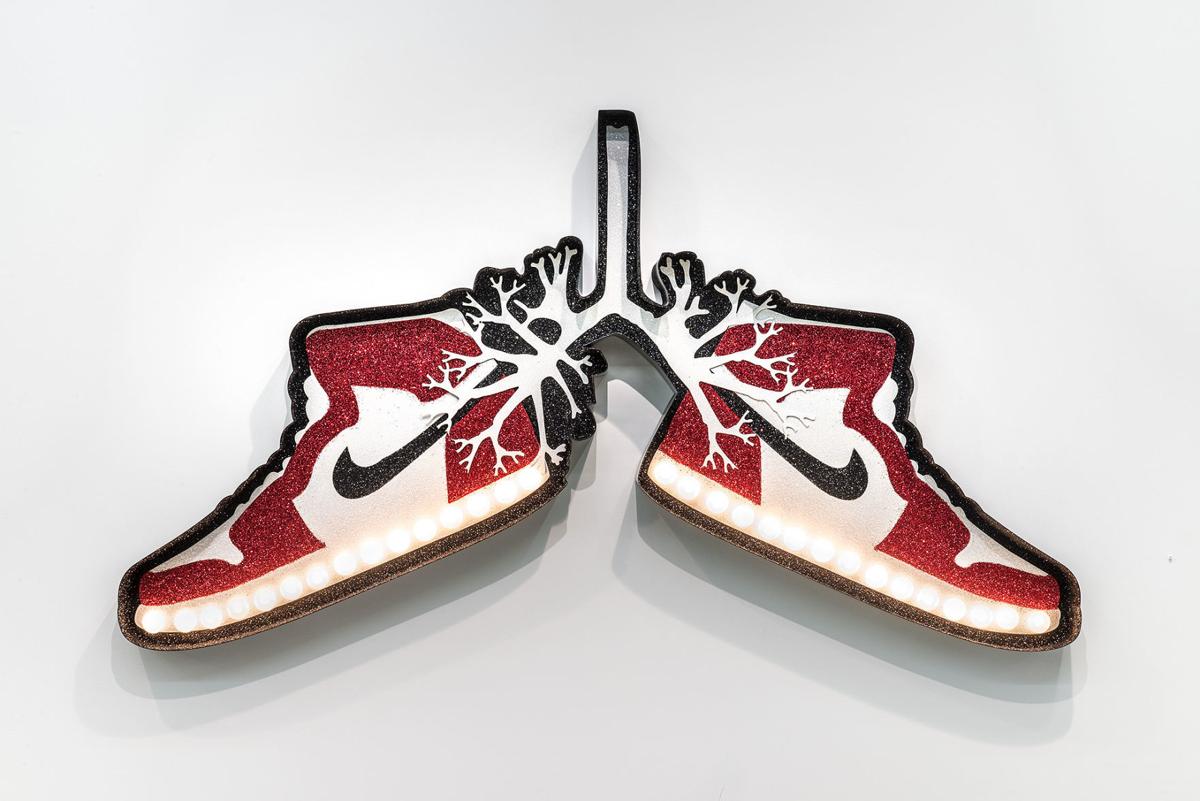 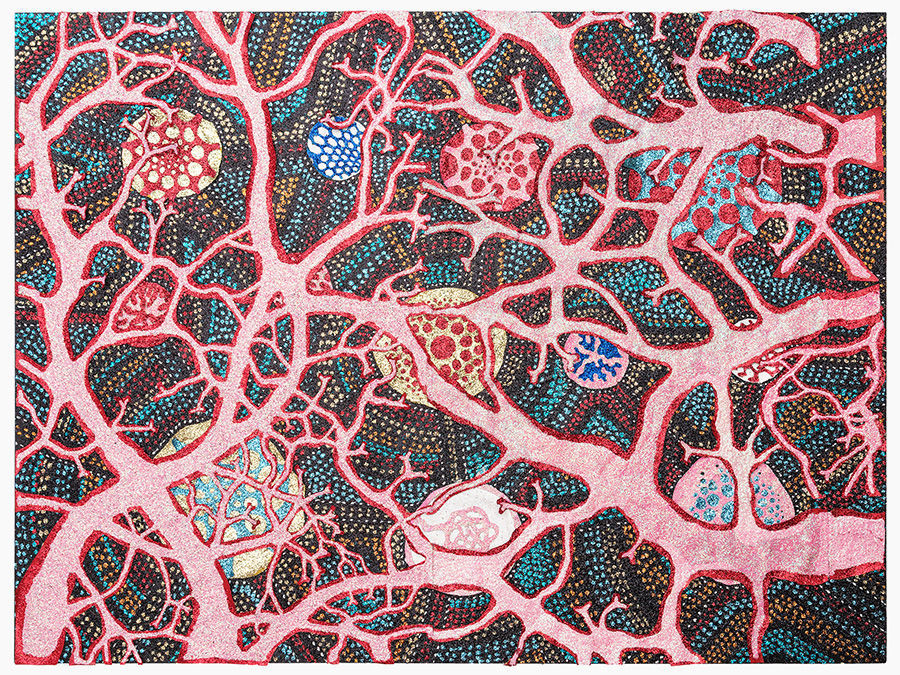 Dylan Mortimer poses for a photo inside NewYork-Presbyterian Hospital in New York City after his second double-lung transplant in January 2019.

KANSAS CITY, Mo. — People often ask Dylan Mortimer how it feels to breathe through transplanted lungs. He gets that a lot because while most people go through life with one pair of lungs, Mortimer is on his third.

The 40-year-old artist has endured two double-lung transplants in the past two years. He often shares his journey onstage as a speaker. But when the curtain closes, he leaves the rest of the storytelling to art.

"I'm alive because of what someone else did," Mortimer said. "That is humbling in all the best ways."

The pastor turned full-time artist buys glitter by the pound to illustrate his battle with cystic fibrosis. For most of his life, the debilitating disease clogged his lungs with mucus, making it hard to breathe.

As he continued to struggle for air into adulthood, art became a way for him to process and explore his disease. He uses patterns and shapes inspired by the structure of the lungs and cells of his body. His artwork feels whimsical — all that glitter makes it glow — yet each piece holds the weight of Mortimer's pain.

"The gratitude outweighs the pain," Mortimer said. "Even if you're in immense pain, you know that my donor is not. He lives in me, but he's not alive anymore. I am. So I'm grateful for his decision, the selfless act."

One piece called "Sounds Clear" shows mucus dripping from a set of lungs. Another collage shows Mortimer's view from an ambulance, while other works celebrate "Air Jordan" Nike sneakers — shoes that Mortimer coveted as a child.

"I'm taking scars and wounds and making them bright and shiny," Mortimer said.

Mortimer initially was a minister, leading a church in Kansas City after graduating from art school in New York. He's not a full-time pastor anymore, although he said he shares his faith through art.

"It's seemingly a big transition but, for me, being a person of faith and being an artist has all of these similarities," Mortimer said. "You're trying things out, you're exploring and you're trying to find truth."

At 3 months old, Mortimer was diagnosed with failure to thrive. His condition was later identified as cystic fibrosis.

"They didn't even know what to call it at first," Mortimer said. "That framed a lot for me."

In 1979, when Mortimer was born, doctors weren't sure whether anyone with cystic fibrosis would make it past their late teens, Mortimer said.

But treatment for the disease improved as Mortimer grew up and was able to enter art school at Kansas City Art Institute. He went on to complete his master's at the School of Visual Arts in New York. At 25, he married the love of his life, Shannon, and they started a family while he honed his skills as an artist and pastored a church.

But by the time he was 37, the progressive disease had taken its toll. Doctors told Mortimer he needed a double-lung transplant. The hospital found a donor, but Mortimer's body ultimately rejected the first set of lungs. A year and a half later, he was back in the operating room for another double-lung transplant.

This time, doctors were more confident about the match. And the lungs came from an unexpected place: One of his Instagram followers, now a close friend, had lost a family member. The friend arranged to see whether her late cousin's lungs were a match and could be donated to Mortimer specifically.

"We couldn't believe it," Mortimer said. "I didn't even know you could do that."

And just a month after the surgery in January, he was jogging again. Then Mortimer started to complete longer runs.

"I don't like running," Mortimer said with a chuckle. "But I like the victory and the symbol it represents, having gone through two lung transplants and finishing a 10K. It's something to celebrate."

The stories behind his medals, art and surgery might go into a book one day. It's an idea Mortimer is considering.

"I believe that there is hope in the most hopeless situations," Mortimer said. "That's certainly what has kept me alive."

This report is a product of Kaiser Health News, a nonprofit news service covering health issues. It is not affiliated with Kaiser Permanente.

Once winded walking up stairs, Omaha man is back in gym thanks to new cystic fibrosis therapy

Thanks to a newly-approved drug, cystic fibrosis patient Nicholas Bell is back in the gym.