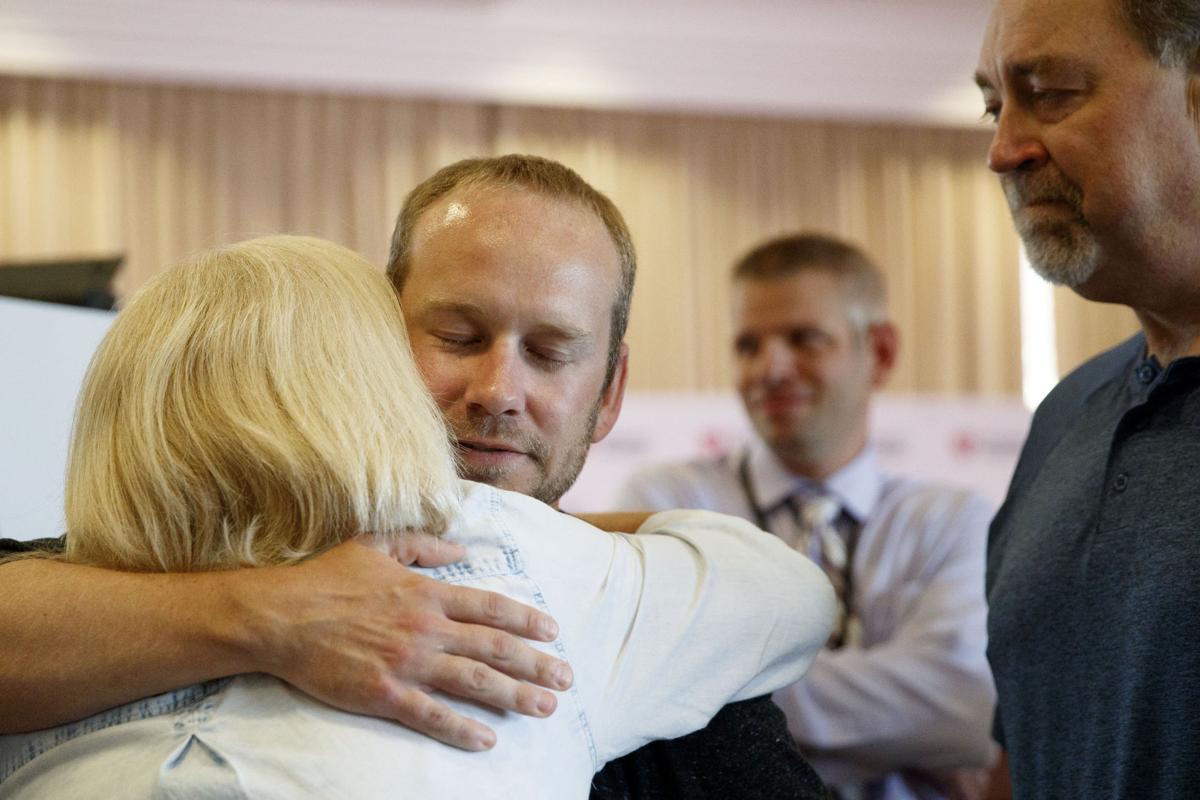 Mary Kitzelman hugs Derek Beisner, who donated a kidney to Kitzelman’s husband, Mark. They were a part of the largest single-hospital living-donor kidney transplant chain in Nebraska history. 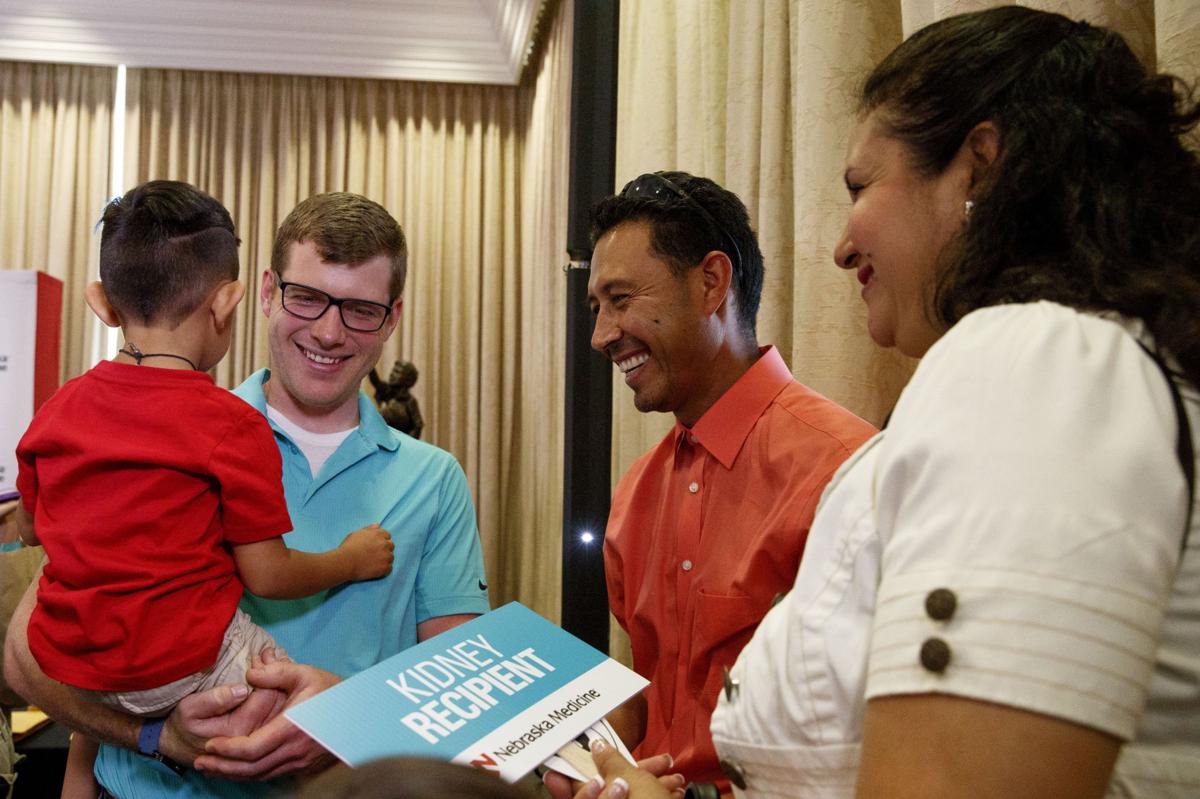 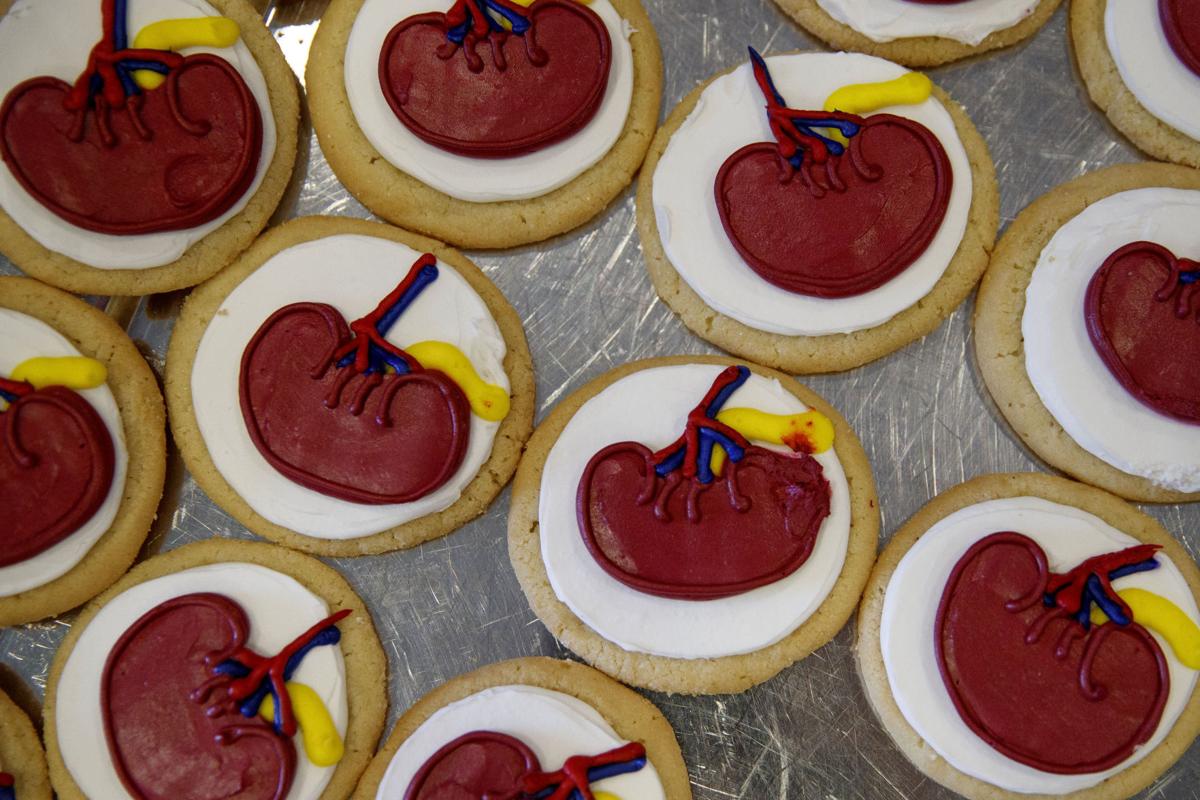 Cookies decorated with kidneys displayed during an event at which donors and recipients of a living donor kidney transplant chain met. 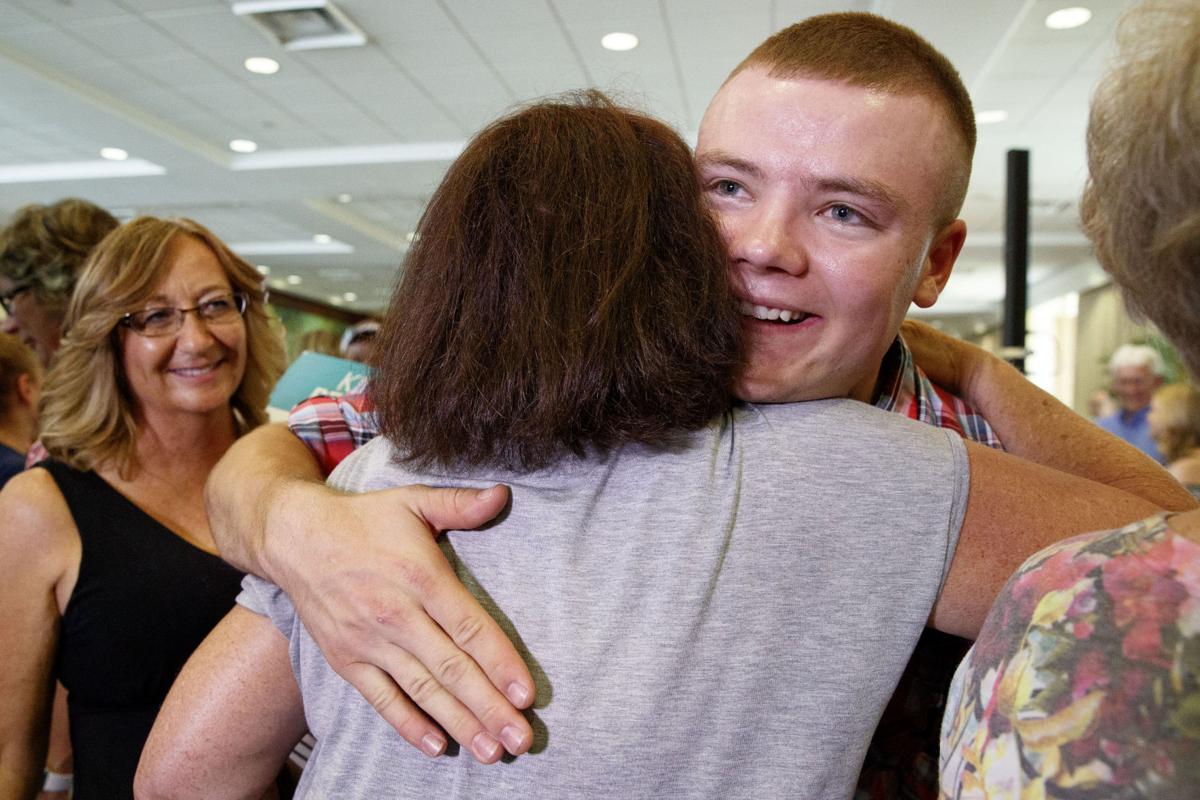 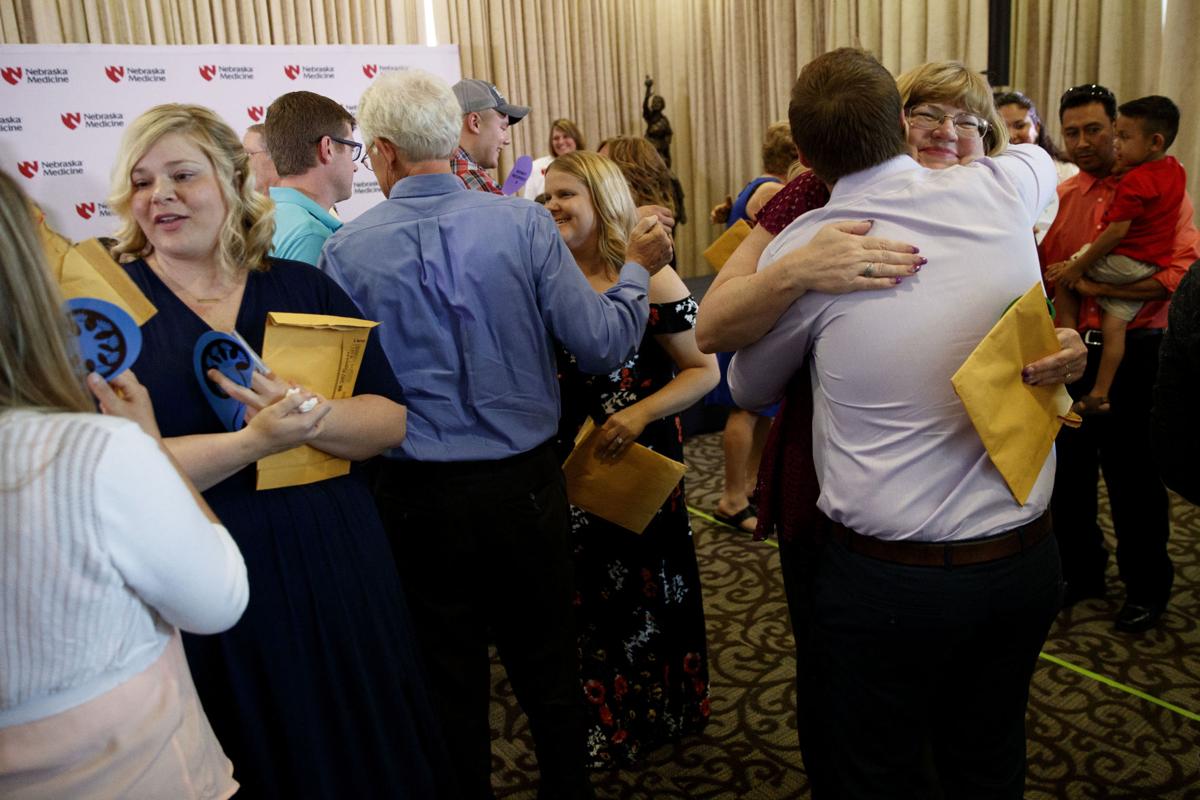 Mary Kitzelman hugs Derek Beisner, who donated a kidney to Kitzelman’s husband, Mark. They were a part of the largest single-hospital living-donor kidney transplant chain in Nebraska history.

Cookies decorated with kidneys displayed during an event at which donors and recipients of a living donor kidney transplant chain met.

A chain is forged link by link. But it takes one link to start.

Same goes with a living-donor kidney transplant chain, which starts with a single person willing to donate an organ to someone he or she has never met.

On Thursday, 18 people — nine living donors and nine recipients from across Nebraska and one other state — gathered at the Nebraska Medical Center to learn how a chain begun by an Omaha mother of seven had come together and how it is making a difference in the lives of the recipients, one as young as 5.

Until then, none had known how many were involved in what now ranks as the largest single-hospital living-donor kidney transplant chain in Nebraska history and one of the largest chains at a single hospital in the United States. Previously the medical center’s largest transplant exchange was a three-way exchange in July 2016. (A transplant chain is when one person donates a kidney to an unknown recipient, starting a chain of events that allows patients with incompatible donors to swap kidneys for a compatible one.)

In a big reveal marked by tears, hugs and thank-yous to medical staff, the members of the chain learned the names of their matches and something about them.

“Donating a kidney is one of the most courageous and noble acts a person can do,” said Dr. Arika Hoffman, a transplant surgeon at Nebraska Medicine, noting that the only thing donors get in return is the knowledge that their intended recipient will get a kidney in the exchange.

Each year the number of patients who need a kidney transplant increases, while the number of deceased donors has remained about the same. Living donors can step into that breach and provide organs that patients might not otherwise receive.

More than 1,000 kidney transplants from living donors have been performed at the med center since 1970. Living donor kidneys tend to be of better quality and last longer, doctors say. (A person can live normally with one kidney.)

Sue Venteicher, 52, a wife, mother and grandmother who in 2016 was named Nebraska Mother of the Year, was the first link of the chain.

Venteicher has worked as a phlebotomist for nearly 30 years, starting at Nebraska Medicine and later switching to Children’s Hospital & Medical Center. Indeed, the notion of donating a kidney first came to her while she was at Nebraska Medicine. But she was busy having babies, so she put the idea on hold.

Then, in August 2015, she was working late when she ran into a young man named Michael Peters and his father, David Peters, an old friend. Venteicher had served on the school board at St. Stephen the Martyr School while David Peters, now head of school at Mount Michael High School, had been St. Stephen’s principal. Through that connection, she’d also gotten to know Michael.

Venteicher (pronounced Ven-TIE-sher) learned that Michael, who’d received a heart transplant as a baby, was going into kidney failure. Reminded of her earlier interest, she got tested as a potential donor. She didn’t prove a match. Michael received a kidney from another donor in summer 2016. But the transplant failed, and his health worsened. Michael Peters died in January at age 20.

When contacted by the transplant team, Venteicher, who placed an 8-by-10 photo of Michael on the podium before she spoke Thursday, agreed to donate to someone else.

“All I could think about is how close my family is and how much we love each other,” she said. “If one of us was sick it would affect every bit of us, all of us, every single day, and I didn’t want any family to have to go through that.”

Over the next five months the transplant team matched, arranged and rearranged patient names on a board — dubbed the Board of Hope — in the transplant offices.

On Feb. 27, Venteicher underwent surgery, completing the first link. During the course of that week, eight more transplants followed. Dr. Alexander Maskin, another transplant surgeon, removed the kidneys. Dr. Hoffman placed them in the recipients.

Andy Aranda, a 5-year-old from Omaha, was the last link. Andy received a kidney from Tyler Sturgeon of Cozad. Sturgeon, a pharmacist, initially intended to donate to family friend Ricky Love. Love, a father and grandfather from Cozad, works for Educational Service Unit No. 10 helping transition students into adult life. As part of the chain, Love got a kidney from another donor.

Jesus Aranda, Andy’s father, said Thursday that he didn’t have the words to thank Sturgeon, other than telling him, “Thank you very much for sharing his life and organs with my son.”

Andy, who will be in first grade, was born with a kidney condition. Until the transplant he couldn’t eat by mouth and he had many restrictions. He’d been hospitalized three times. Now he can run and play, and his favorite food is chicken. Aware that he’s small for his age, Jesus Aranda said, Andy looks forward to growing tall like his two brothers, who are among a total of six children.

When Venteicher stopped to greet the family, Jesus Aranda shook her hand and thanked her, saying, “A chain is not one link.”

Sturgeon said he never really hesitated about making a donation, even after learning the organ wouldn’t go to his friend and knowing he had three young children of his own. “I really didn’t even question it,” he said, noting that it was exciting to finally see what the chain had wrought. Said his wife, Katie, “I just knew that God was in control and there were no worries.”

Venteicher, meantime, learned that her kidney went to Dennis Molfese, a neuropsychologist at the University of Nebraska-Lincoln. Molfese had been on the transplant list for years. His condition had worsened in recent years, and he’d stepped down as director of UNL’s Center for Brain, Biology and Behavior. He’d started dialysis a couple of months before the transplant, and even that made him feel better. Before, his blood pressure had gotten so high he’d feared a stroke.

David Hansen, a friend and professor of psychology at UNL, had stepped in to direct the center. He encouraged Molfese to send a note to colleagues and acquaintances to see if any were interested in donating. They got no takers. But one day, Molfese said, Hansen came into his office and said, “You know, I’ve always wanted to donate a kidney.”

The news that he would get a kidney through the chain, Molfese said, “was just such an incredible lift to my spirits. Basically, you’re just waiting to die.”

Before she learned Molfese’s name, Venteicher had read from a letter he’d sent anonymously, which reinforced how such an illness can ripple through a family.

Said Venteicher, “That’s what it’s all about.”

Anna Hutt shed tears on Mother’s Day as she listened to the beat of her teenage son’s heart inside the chest of the man he saved through organ donation.