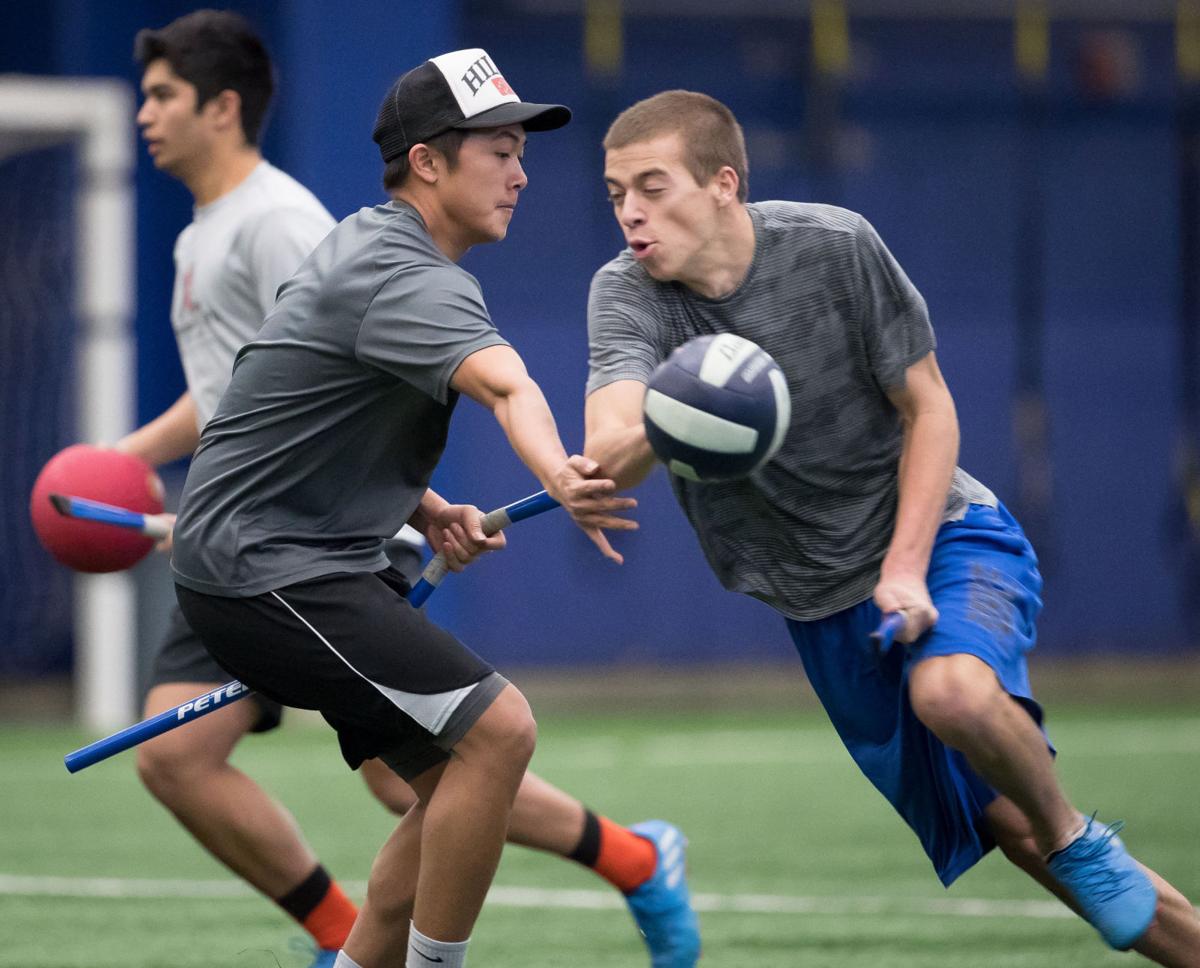 Paul Enriquez, left, a junior, guards Ben Silverstein, a freshman, as he tries to score a point during Quidditch practice on Sunday. The Creighton Quidditch team practiced at the Rasmussen Center on the Creighton campus on Jan. 29 in Omaha. The group said they are the only Quidditch team in Nebraska. 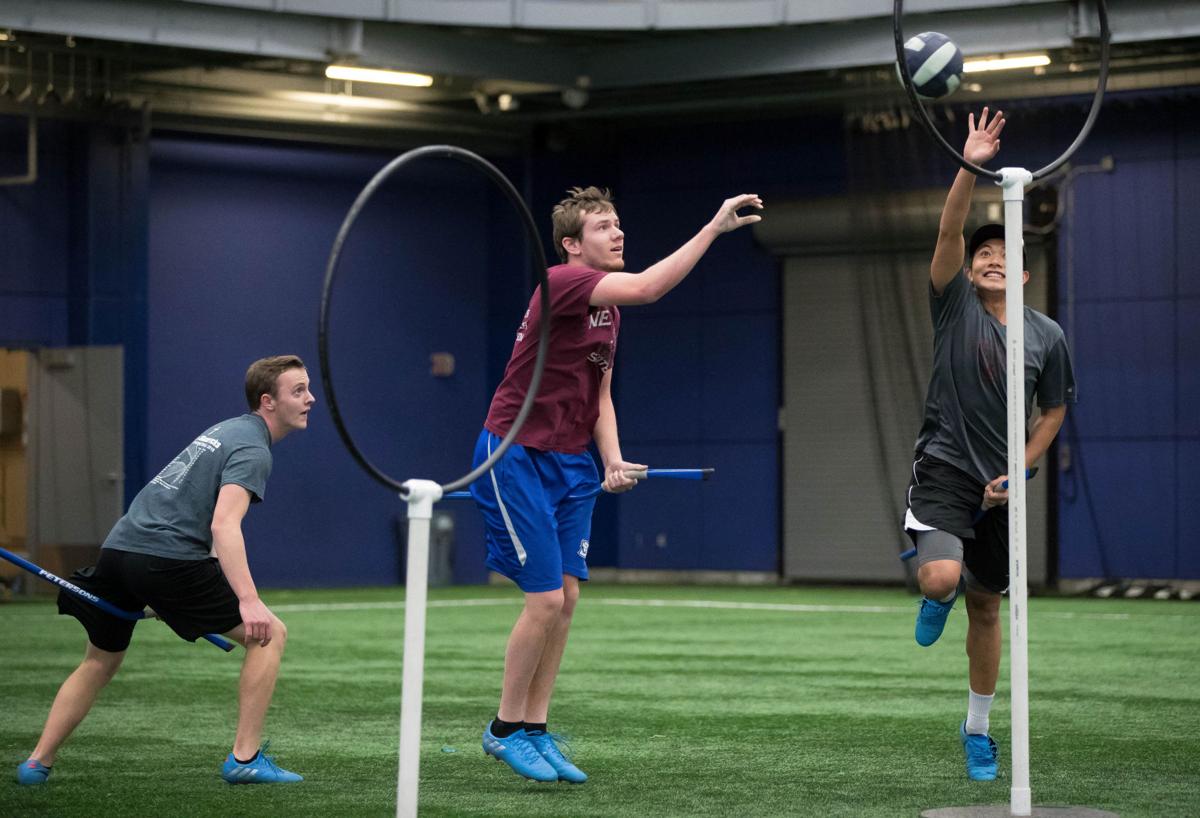 Creighton Quidditch players, from left, Bailey Braun, Ben Gribben and Paul Enriquez maneuver on “brooms” as they try to get a ball through one of three hoops at the Rasmussen Center on campus. “It’s actually a fun game to play,” Braun said. “(People) chuckle and laugh, because it’s a bunch of nerds, but you have to be a little bit of an athlete to play.”

Paul Enriquez, left, a junior, guards Ben Silverstein, a freshman, as he tries to score a point during Quidditch practice on Sunday. The Creighton Quidditch team practiced at the Rasmussen Center on the Creighton campus on Jan. 29 in Omaha. The group said they are the only Quidditch team in Nebraska.

Creighton Quidditch players, from left, Bailey Braun, Ben Gribben and Paul Enriquez maneuver on “brooms” as they try to get a ball through one of three hoops at the Rasmussen Center on campus. “It’s actually a fun game to play,” Braun said. “(People) chuckle and laugh, because it’s a bunch of nerds, but you have to be a little bit of an athlete to play.”

But the 21-year-old college student still had a lot to learn before picking up his broomstick for a round of Quidditch.

He’s one of 17 players on Creighton University’s new Quidditch team.

The game is an adaptation of J.K. Rowling’s creation in the “Harry Potter” series, where players take to the sky on broomsticks.

The Muggle — or non-magical — version is a coed, full-contact sport that combines elements of rugby, dodgeball and tag. Seven players per team mount brooms made of PVC pipe and attempt to throw balls through tall hoops to score points.

There are about 150 college teams in the United States, according to US Quidditch, the sport’s national governing body. Quidditch has been around since 2005, when it got started on the East Coast and then spread to other college campuses.

Creighton, which formed its team in August, is the only university in Nebraska that plays Quidditch. The team is hosting its first tournament, the Blue Jay Classic, on Saturday.

Imperial, who’s studying marketing and business, grew up with “Harry Potter.” Reading the books and watching the movies were family affairs. Imperial also was a high school athlete, dabbling in a number of sports, including golf, tennis, track and soccer.

Finding out the game existed in real life was a pleasant surprise. Imperial stumbled upon a practice while visiting home in Hawaii. He was skeptical at first, thinking it would be a “nonathletic nerdfest.”

Instead, he found a real sport in action. Players were constantly running the length of the 60-yard field. It reminded him of soccer, though Quidditch involves more sprinting. The players, showcasing strength and balancing skills, knocked into one another, sending their opponents to the ground.

He was hooked, so he brought the idea back to Creighton. On campus he found Curtis Taylor, assistant director for multicultural organizations and programs. Taylor helped create a team at Marquette University, where he went to college, and has coached several others. The two introduced Creighton to Quidditch.

To score points in Quidditch, three “Chasers” throw a volleyball — known as a Quaffle in the “Harry Potter” world — through what look like hula hoops. Two “Beaters” toss dodgeballs — or Bludgers — at members of the opposing team to distract them and disrupt play.

One Keeper guards the three hoops, which are about 3 feet, 4.5 feet and 6 feet off the ground.

Once play has been going for 18 minutes, the Snitch enters. The Snitch is a player dressed in yellow, wearing a tennis ball on the back of his or her shorts. Usually a cross-country runner, the Snitch darts around the field trying to prevent Seekers — that’s Harry Potter’s position — from catching the tennis ball. Catching the Snitch ends the game.

The team with the most points wins. Creighton’s games typically last between 30 and 35 minutes.

While the game may not be as magical as it is in print and on the big screen, it’s every bit as competitive.

As coach, Taylor requires team members to attend two practices a week and commit to working out on their own time.

“There’s just a lot of raw athleticism. For practicing together for two months total, they have done phenomenal,” he said.

During a Sunday afternoon practice on the Creighton campus, players set up hoops made of white PVC pipe and black tubing. Others playfully tossed red dodgeballs at one another.

A chaotic scene unfolded when the college students — all wearing matching light blue shoes — started zooming around the turf field on bristle-less broomsticks.

Thuds and groans echoed through the field house as dodgeballs smacked players’ backs, sometimes knocking them from their brooms. Play moved quickly as Chasers passed the Quaffle around before tossing it through the hoops.

When Bailey Braun, a freshman at Creighton, told his family and friends that he played the sport, they didn’t take him seriously. But once they saw the game in action, they were believers.

“It’s actually a fun game to play,” Braun, 18, said. “(People) chuckle and laugh, because it’s a bunch of nerds, but you have to be a little bit of an athlete to play.”

The combination of physical activity and childhood nostalgia is what makes the game so appealing, said Katie Kelsey, director of Creighton’s Student Leadership and Involvement Center. The center oversees university clubs.

“With this generation of students, ‘Harry Potter’ is very much a part of their world,” Kelsey said. “The idea of bringing to life a sport from a book or movie that was meaningful to you has an appeal.”

Kelsey said she thinks Quidditch — one of 217 clubs at Creighton — has staying power.

“We try to approve groups that will be around longer than the three or four years the student will be with us,” she said.

Being a “Harry Potter” fan isn’t essential to the sport — some Creighton players haven’t read the books or watched the movies.

Being a fan comes in handy when selecting a team name, though. “Harry Potter”-inspired names in the league include the Tufts University Tufflepuffs, the New York Badassilisks and the Team-Who-Must-Not-Be-Named in Pennsylvania.

The sport encourages college students to stay active, said Mary Kimball, events director for US Quidditch. Because of the game’s connection to “Harry Potter,” it can be a little less intimidating to someone who may not have experience with organized sports.

But once players take to the Quidditch pitch, the nostalgia is swept aside and a competitive edge kicks in. During games and tournaments, as many as six referees monitor play. Like in soccer, yellow and red cards are given for overly aggressive play.

The physicality of the sport intimidated Casey Allen at first. The 20-year-old Creighton sophomore watched her roommate get knocked down by a male player during one of their first practices. But it didn’t deter her.

“It’s kind of fun because normally girls don’t get to do that,” said Allen. “It’s kind of scary, but it’s also empowering.”

Allen, one of the team captains, and many of her peers sport large bruises after games and practices.

Being a full-contact sport can mean injuries, so medical staff and athletic trainers are on-site during US Quidditch events.

In its first season, Creighton has seen a couple. One student broke his nose. Imperial, a junior and president of the team, tore a ligament in his thumb. The injury worsened during a regional tournament and eventually required surgery.

But no one has developed a lightning bolt scar on the forehead like the series’ main character.

Oh, Imperial added, and another exception: “We can’t fly.”

Cost: Free. The public is invited to watch.