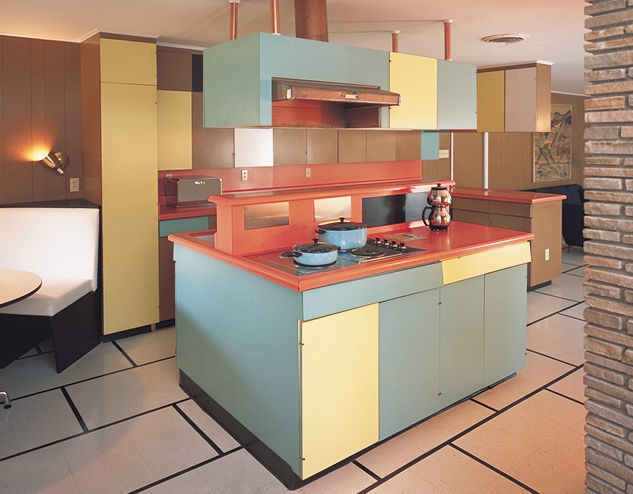 Ralph Wilson Sr., the founder of Wilsonart, designed and built his house in Temple, Texas, in 1959. In addition to serving as his private residence, the house was a model home to showcase new laminate applications. 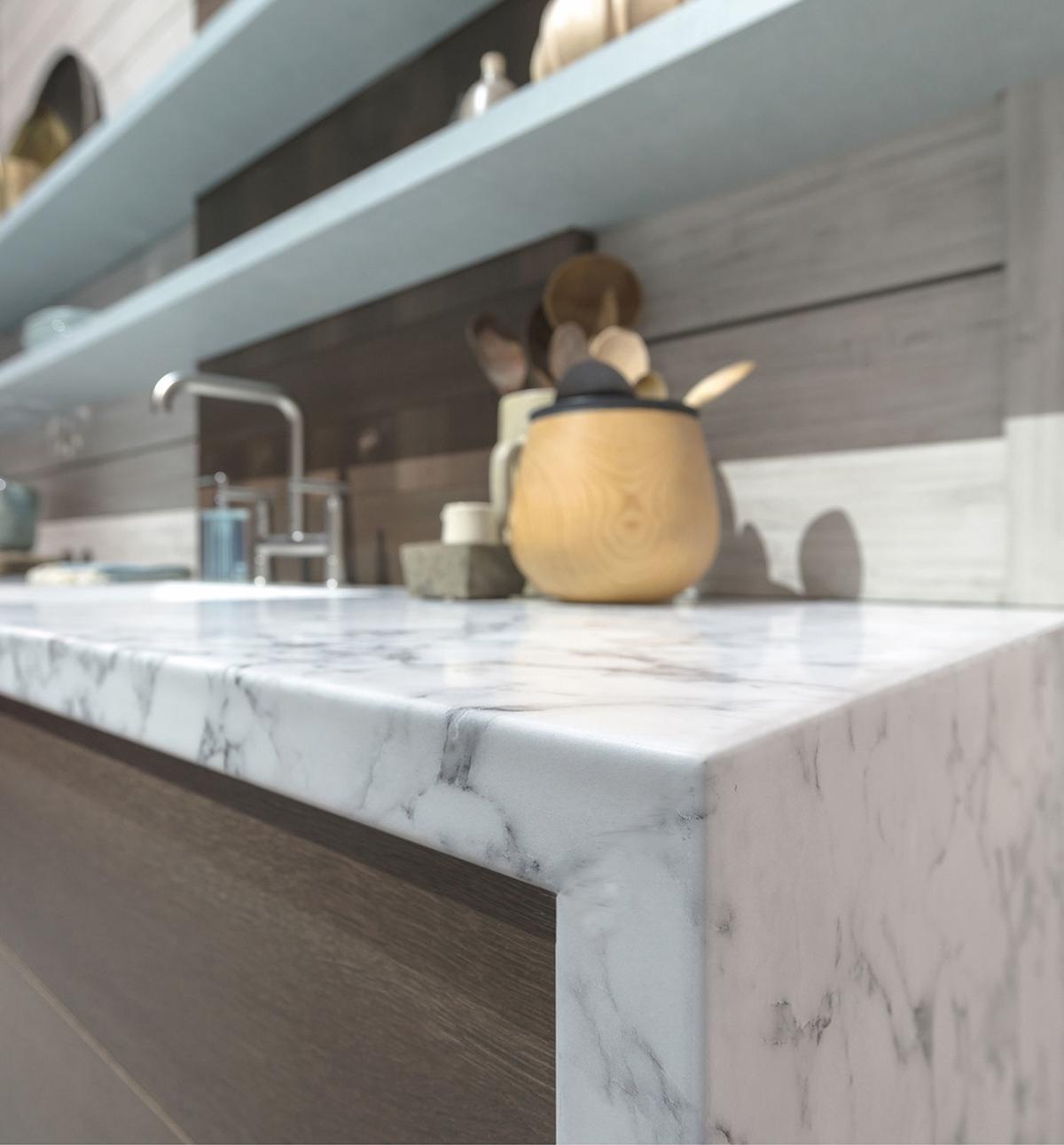 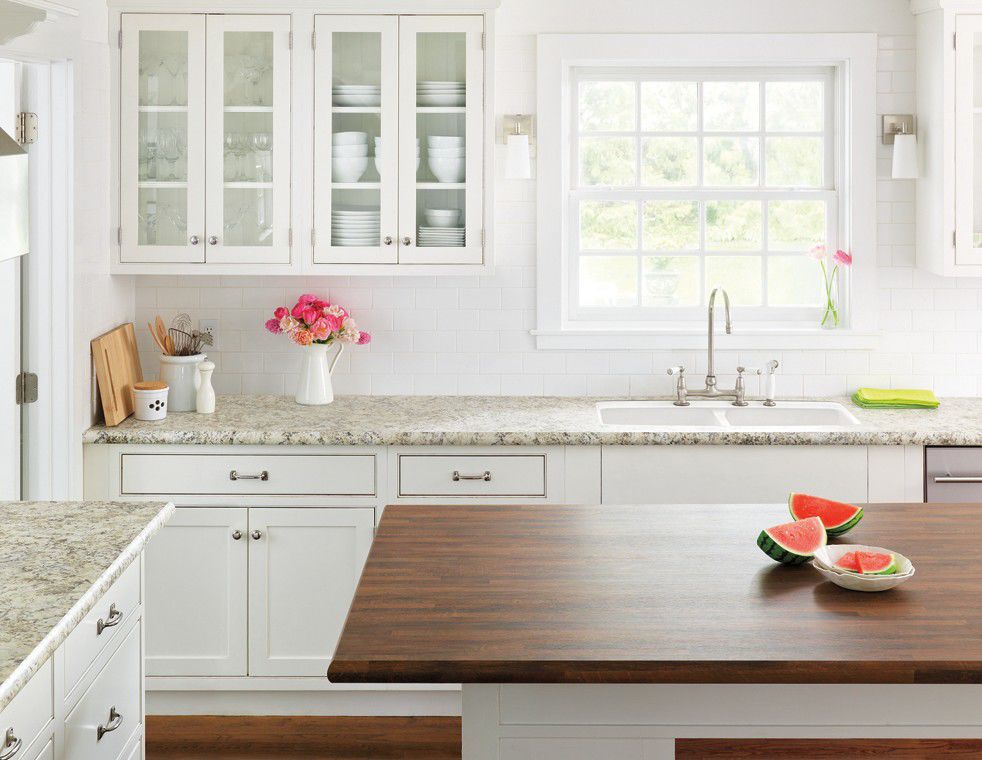 Thanks to improved design and printing techniques, laminate countertops can feature matte finishes and other veneers, and they more closely resemble natural materials.

Ralph Wilson Sr., the founder of Wilsonart, designed and built his house in Temple, Texas, in 1959. In addition to serving as his private residence, the house was a model home to showcase new laminate applications.

Thanks to improved design and printing techniques, laminate countertops can feature matte finishes and other veneers, and they more closely resemble natural materials.

The phrase “laminate countertop” usually elicits a look of distaste. A wrinkled nose, maybe a brief sigh and then the phrase, “Too bad it’s not real stone.”

For some it brings back memories of speckled off-white counters from childhood homes. Even people who wouldn’t describe themselves as design-savvy see laminate as outdated. But that could be changing.

Homeowners, designers and even celebrities are warming to the idea of laminate surfaces thanks to new technology that mimics the look and feel of stone and wood.

The pendulum started swinging back toward less-expensive surfaces around 2005, when birch plywood, reclaimed wood and concrete started being used in more modern ways.

Designers realized that if they kept the lines clean and added quality accessories, they could use inexpensive materials to create a chic space, says interior designer Amy Sklar. (She estimates that laminate can be about a quarter of the price of stone.)

“Now you’re also getting more exposure to design through social media, so trends cycle quickly. Cheaper surfaces like laminate become a not terribly expensive way to do something bold and exciting, but it’s not the end of the world to replace.”

The term “laminate” covers a variety of materials, but generally it’s a decorative veneer that must be applied to a material such as plywood or particle board, called a substrate.

A “high-pressure decorative laminate” is used for countertops. Westinghouse first made it into a sheet material around the start of the 20th century and was awarded the patent, but its inventor, Daniel O’Conor, saw more potential in laminate sheeting and left Westinghouse to co-found Formica.

Companies started using the material on tabletop sewing machines because it’s slippery, letting fabric move over it quickly. It started appearing in tabletops in the ’20s and bars in the ’30s, but it didn’t really hit the consumer market until after World War II when there was a push because of the housing boom.

To ’50s home buyers, laminate was considered a luxury material. But a growing sensitivity to synthetic materials in the ’70s started the aversion to laminate that still exists today.

But now, thanks to the cyclical nature of design, younger millennials are poised to become laminate’s ideal consumers — because they’re too young to remember the crazy patterns of the ’80s. The stigma is gone.

A few years ago, after pinpointing millennials as a major demographic, Wilsonart started conducting trend research. It discovered that these buyers didn’t want retro-looking laminate; they wanted surfaces that mimicked natural surfaces that were too pricey.

“It’s interesting because they didn’t even really know what laminate was. It was a brand-new surface to them,” says Natalia Smith, a design manager for Wilsonart. So now companies like Wilsonart and Formica, which mostly have the North American market cornered, are catering to this demand by using technology to change the look and feel of laminate.

Newer laminate patterns benefit from advanced printing technology. Designers today are able to scan a piece of stone slab from different angles to create a large digital file. A printer can then lay it down four times, building layers with translucent inks that can mix colors to create a realistic final product, Smith says.

“In the last three years we’ve been able to play with texture, too,” Smith says. “Matte, a soft silk finish, and even embossing that might have little fissures or pits that you’d see in an actual stone. We’re always thinking about how to capture it so that when you touch and look at it, your mind (connects) it to nature.”

Today’s laminate looks like the real thing. Is that enough? There are disadvantages to using a material with a substrate.

Elle H-Millard, industry relations manager at the National Kitchen & Bath Association, says that although finishes have evolved to resist small scratches, an accidental gouge can chip the surface, revealing the material underneath.

Depending on the quality of the laminate, heat can damage the surface as well, clouding the color or warping the finish. Some finishes can resist heat up to 400 degrees, but if heat resistance is a concern in your kitchen, another material might be a smarter choice.

Seams, which show up in stone countertops as well, are more noticeable than with a solid surface, especially on the edges. There are still edges that show the transition of color between the surface and substrate.

“It’s like slicing a carrot versus slicing a radish. Stone is one color throughout, like a carrot. Laminate just has that top layer of color or pattern like a radish,” says interior designer Taniya Nayak. “It limits your design options, too,” she adds. “You have to use drop-in sinks; you can’t do an undermount because the substrate will swell if it’s exposed to water.”

Resale value is another concern. Nayak has been using laminate countertops since the early 2000s, when she was on the HGTV show “Designed to Sell,” and recently installed them in a condo-apartment development.

“For the rental units they didn’t want to put in as much money. So we did real stone in the condos, and in the rentals we used a gorgeous laminate that looks like concrete. Everyone that goes in there can’t tell that it’s not real concrete,” Nayak says.

Still, she explains, “laminate is an impostor version, and even if they look exactly the same, you know the difference.” And when it comes time to sell, buyers will find out. “I always advise going for the best you can afford and what you feel is right for your home. If you can swing it, get the stone. ... It’s the same thing as leather versus vinyl.”

Laminate tends to be more DIY-friendly; it’s easier to cut and comes in prefabricated sections as long as 10 feet for under $200. With a life span of at least 20 years, if you care for it properly (avoiding heat or chipping) laminate lasts. It’s a wipe-clean surface that doesn’t require special cleaners or maintenance.

The couple recently worked with a 23-year-old client to buy and renovate her starter home with a budget of $75,000. Installing Calacatta marble-lookalike countertops in the kitchen let them spend more on the rest of the design.

“When you save money there, then you put more money toward beautiful appliances or a hood vent or a cool backsplash, which can elevate the entire space,” Erin Napier says.

For homeowners thinking of using laminate, most designers and manufacturers recommend going to a showroom to really look at all of your options. Then get samples to try out for a bit. Some finishes will be more forgiving than others, and some will show fingerprints more than others, Sklar says.