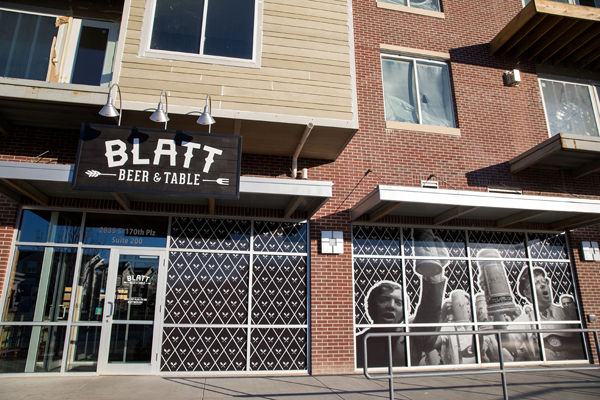 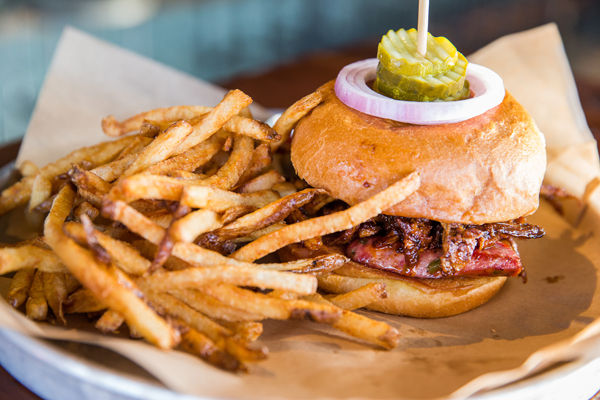 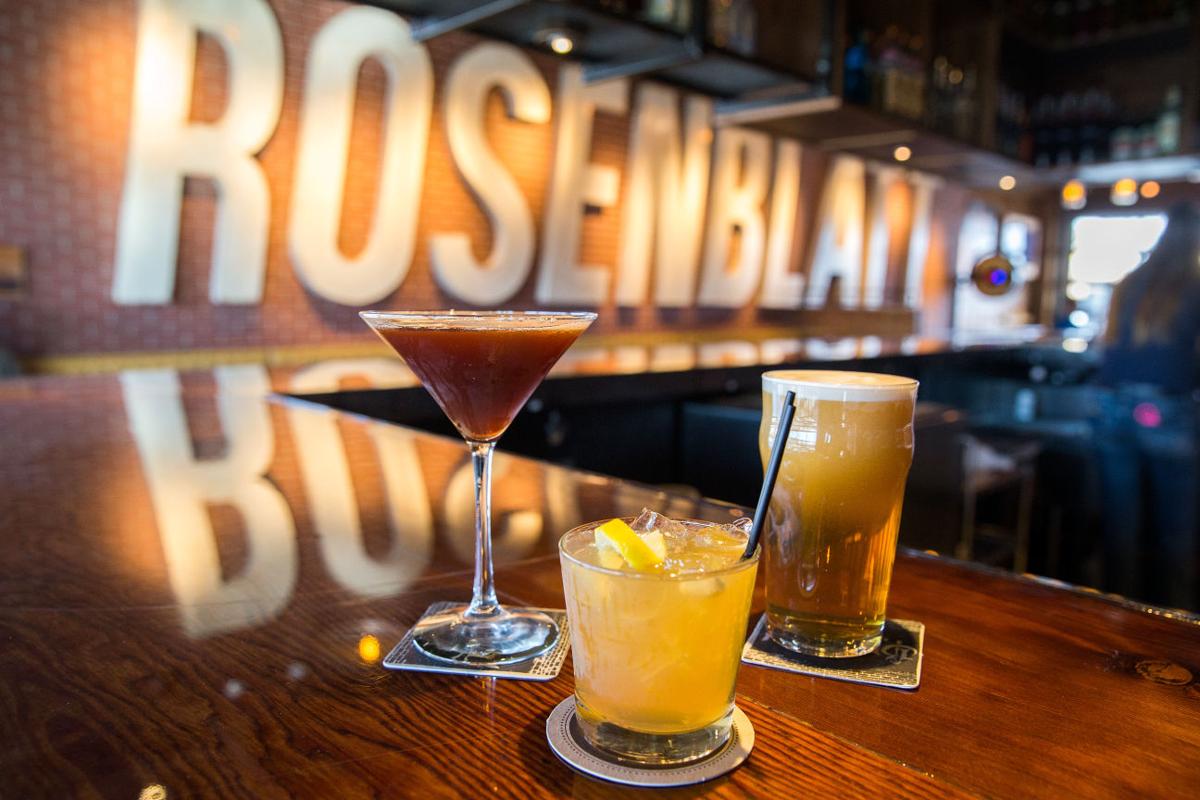 The drinks at the west Blatt include, from left, Vanilla Porter Manhattan, Twist and Stout, and Nitro Mojo IPA. 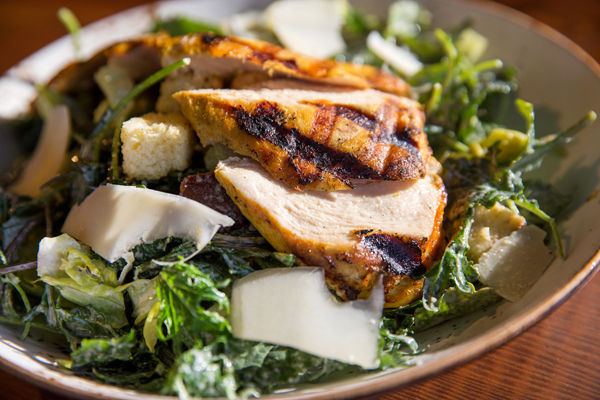 Clockwise from left, are a Manhandler, a smoky pork pasta, a Border Burger and a kale salad.

The drinks at the west Blatt include, from left, Vanilla Porter Manhattan, Twist and Stout, and Nitro Mojo IPA.

The first thing I realized upon walking in the door of the new location of Blatt, near 168th and West Center Road, was that opening the gastropub-meets-sports-bar in west Omaha was a really, really good move. The place was packed.

Part of that is because the new Blatt Beer & Table, much like the original Blatt in north downtown, offers an array of beers, solid burgers and fun takes on classics, like mac and cheese and chicken and waffles.

The rest of it is what you expect at all of the places run by Omaha-based Flagship Restaurant Group: a hip, lively atmosphere, a funky but finely executed menu and a large, vibrant crowd.

The second location of Blatt opened with an expanded menu that includes more burgers, more vegetarian options, more sandwiches and a wider selection of salads and entrees. I’ve written about the food at the original location, and the Blatt burger and fries, the mac and cheese and the salmon gravlax BLT sliders are still among my favorites.

This time, I focused on what’s new. It’s worth noting that many of the new menu items are also available downtown.

A kale salad featured the popular dark green mixed with lighter bits of sweet Boston lettuce hearts, spicy shaved fennel, crisp brioche croutons and a bit of Grana Padano cheese, all tossed with a citrusy take on classic Caesar dressing. Previously, I avoided Blatt’s salads, but I know I’ll have this dish again, especially topped with the curry-heavy grilled Indian chicken. I appreciated that the lettuce wasn’t drowned in dressing, and the mix of greens brought punchy flavor. As an aside, the salad paired deliciously with the Yellow Snow American IPA from Rogue Ales.

Blatt has added three burgers to its menu, and our server recommended one of them, the Border Burger. But when it arrived, he immediately eyeballed it as the wrong burger. The kitchen prepared a whole new burger because redressing the original would have left it overcooked. A manager apologized for the mistake, and we appreciated the attention to detail.

A side of potato salad tasted better than it looked and boasted a deep flavor of dill.

The two pork dishes we tried both had a deep smokiness and big, tender chunks of meat.

Pork is the centerpiece of the Manhandler sandwich. It is paired with house-made smoked kielbasa, house made barbecue sauce, red onion and garlic dill pickles on a thick bun. It’s spicy, messy and manly in its meatiness. The smoky-spicy combination of the pork, though, hit the kind of notes any diner would enjoy. Like they are at the original Blatt, the fries — skin-on, salty and crisp — are standout.

The same smoky pork was scattered through a big bowl of cavatappi pasta. The dish put me in the mind of a loaded, upscale version of the Blatt mac and cheese, with its more layered flavors of roasted cremini mushrooms, pungent beer cheese bechamel, Grana Padano, sweet caramelized shallots and peppery baby kale. The greens were key here, because they balanced the richness of the sauce and broke the otherwise over-the-top creamy texture. My only real complaint was that the pieces of pork seemed much too large.

Blatt isn’t a quiet restaurant — a lively game of shuffleboard against one wall makes it even noisier. No one seemed to mind, though. The crowd at this location seemed to skew older and more female than the one downtown. The west Blatt also has more televisions than the downtown location, but it still has the same look and feel, complete with giant letters that spell “Rosenblatt” on one wall. They are a relic from the original South Omaha stadium, former home of the College World Series and the restaurant’s namesake.

The staff at Blatt seemed knowledgeable about the craft beer and cocktail lists. The Twist and Stout is a tangy, light drink featuring Makers Mark whiskey, fresh squeezed lemon juice, ginger and clover honey. It reminded me of a lighter version of one of my favorites, an Old Fashioned.

The Vanilla Porter Manhattan is like an upgraded version of the chocolate martini. It would be a wonderful stand-in for the person who likes to finish a meal with booze instead of a cake. It involves more Makers Mark along with sweet vermouth, chocolate bitters, cherry juice and vanilla porter foam. It is sweet but not overly so.

The west Blatt also offers a wider selection of wine. Downtown, you get the choice of house red or white. Out west, there’s house wines along with a more expensive Cabernet — I liked the $10 glass of Peirano Estates — or an $8 Pine Ridge Chenin Blanc and Viognier blend.

If you’ve been to the original Blatt, or any Flagship spot, really, you know what you’re in for: lots of atmosphere, good food and a mind-boggling array of beer. What makes it work, though, and what keeps Omahans coming back is the ownership’s attention to detail, narrow focus and excellent, thoughtful staff.

Hits: Almost everything we tried was well-conceived, nicely cooked and tasty.

Misses: The only real complaint: The pieces of smoked pork in a pasta dish could have been cut to a more manageable size.

Prices: Typical gastropub prices, with sandwiches in the $10 range and entrees a few dollars more.

Drinks: A wide selection of beers on tap and in bottles, a short list of cocktails and some wines.

Noise level: Noisy but not deafening. A busy shuffleboard table makes things noisier, but it’s all in good fun.

I first took a look at my favorite west Omaha restaurants at the end of 2013, and two years later, I only have one repeat choice. It's a testament to how west Omaha has grown, and I can only hope that next year I have even more restaurants that are worth venturing to.