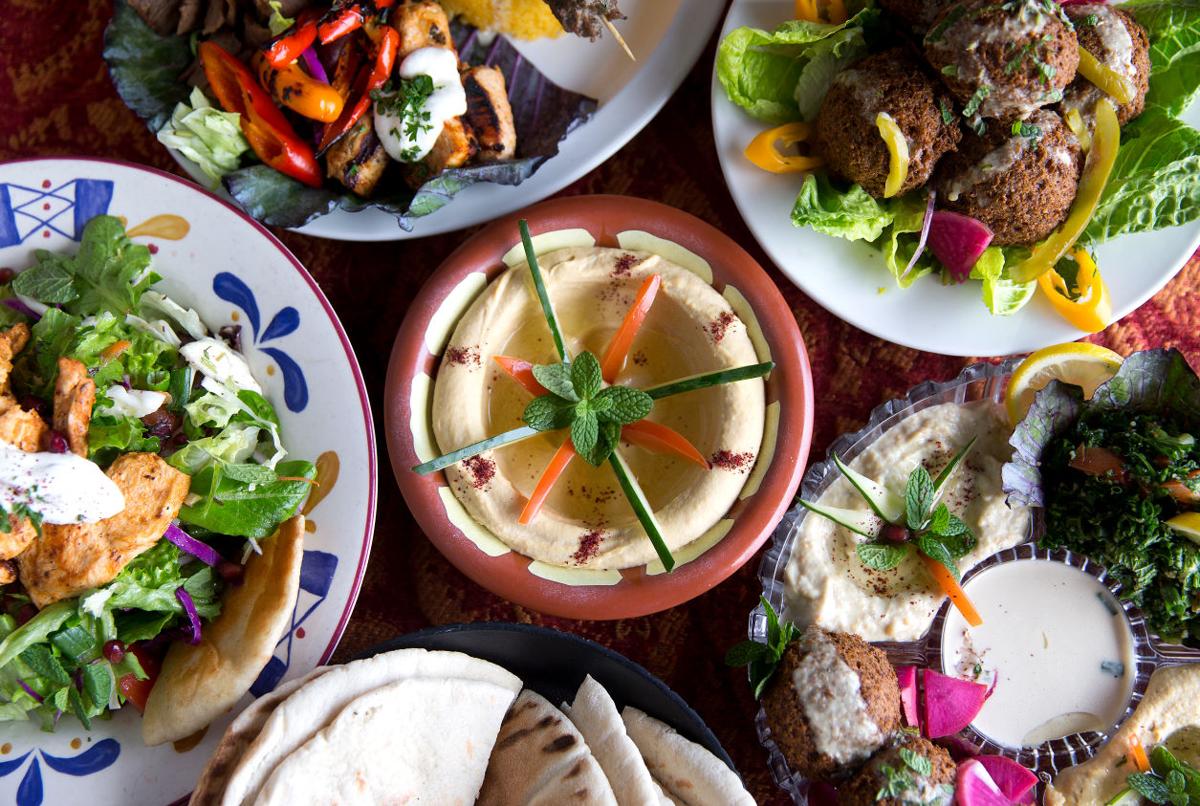 A hummus tahini appetizer, center, from El Basha with, clockwise from left, a shawarma chicken salad, the El Basha special platter, falafel, a mezza plate of appetizers and pita bread. 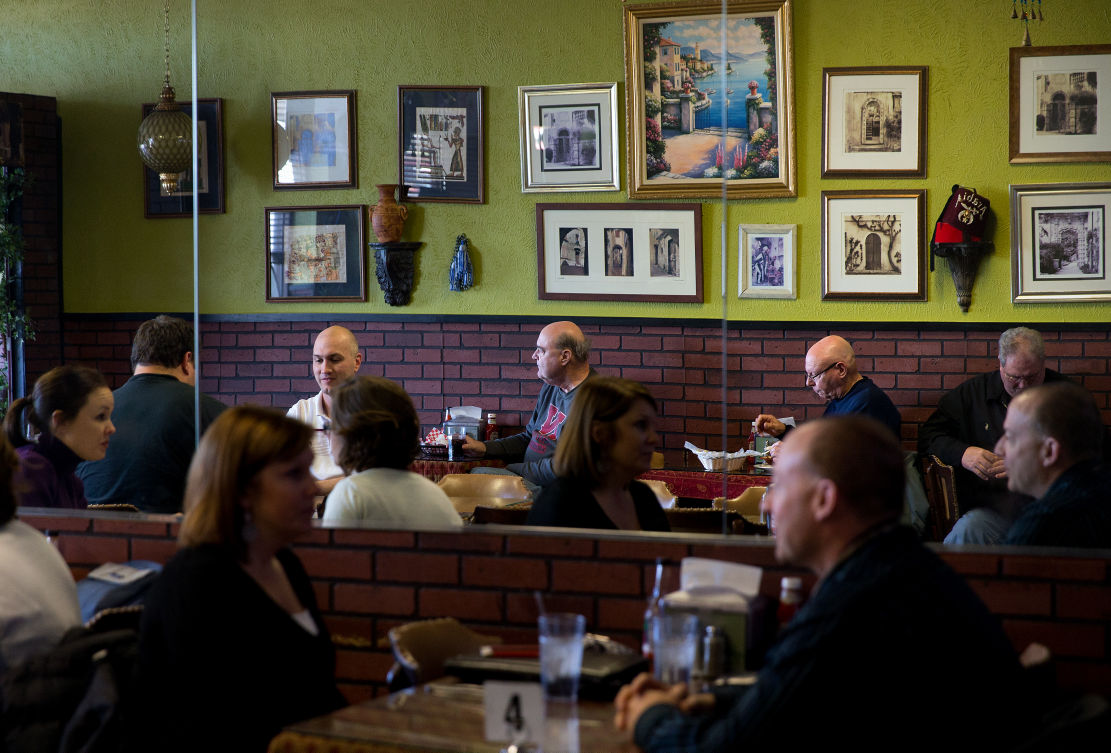 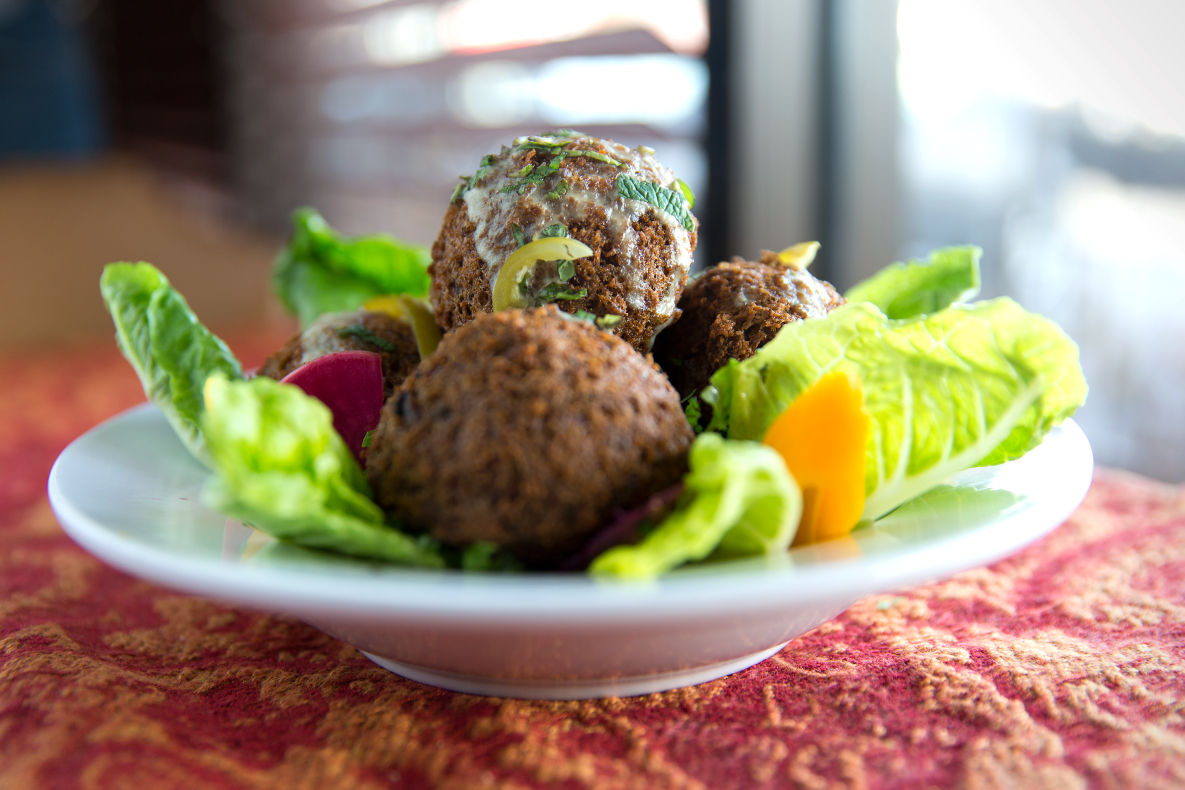 The falafel appetizer is one of the many reasonably priced dishes at El Basha. It’s firm and flaky in texture and bright green on the inside thanks to a blend of parsley, mint and scallion. 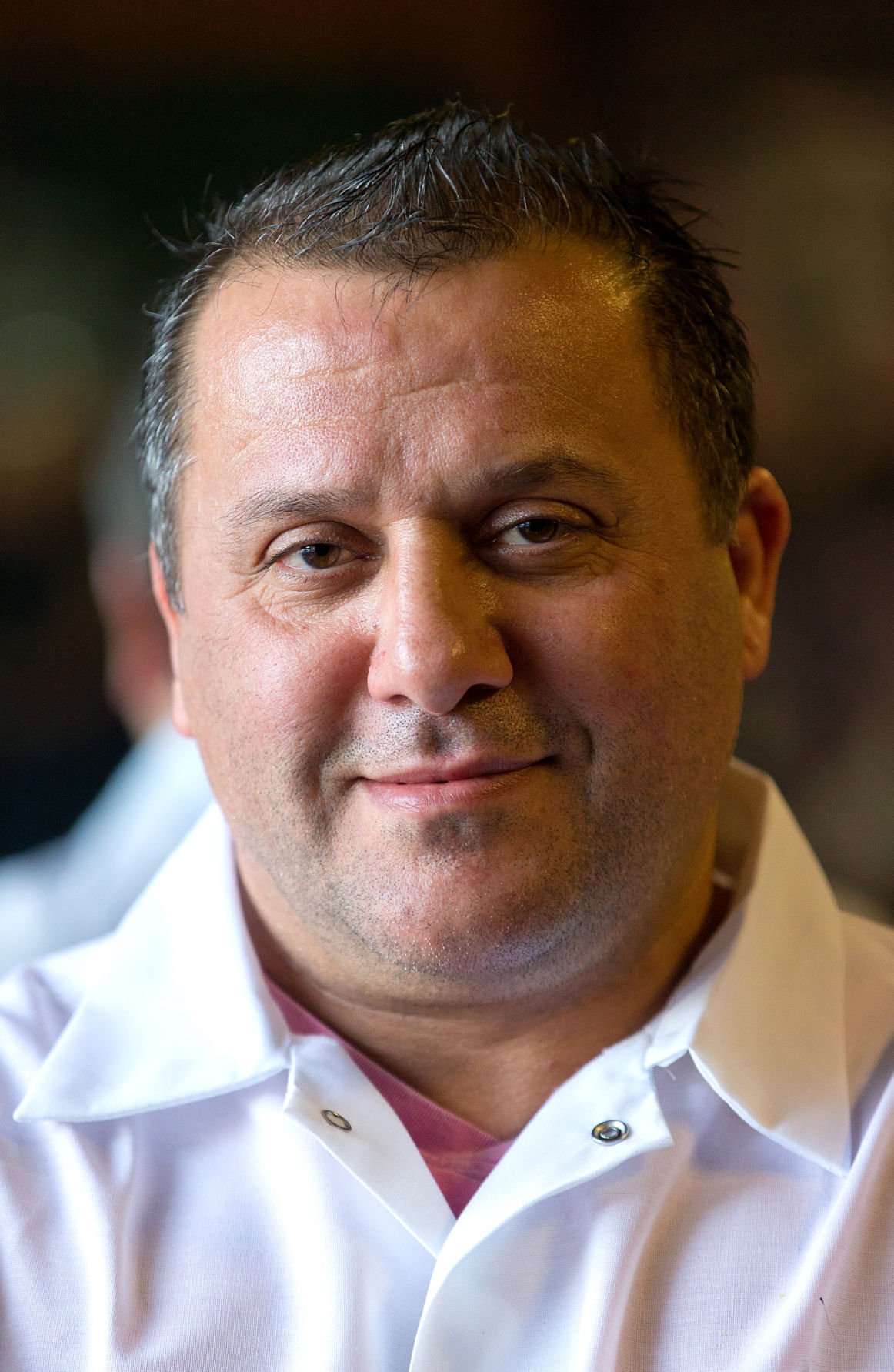 A hummus tahini appetizer, center, from El Basha with, clockwise from left, a shawarma chicken salad, the El Basha special platter, falafel, a mezza plate of appetizers and pita bread.

The falafel appetizer is one of the many reasonably priced dishes at El Basha. It’s firm and flaky in texture and bright green on the inside thanks to a blend of parsley, mint and scallion.

It’s a rare occurrence when, during the course of a dining review, I have no complaints.

Halfway through a bowl of creamy, tahini-laden hummus, a bowl of vinegary, warm dolmas, and a crisp, deeply herby falafel plate, I had nothing at all to be bothered by.

The same thing happened again the second evening I dined at El Basha, a hole-in-the-wall Mediterranean spot near 78th and Pacific Streets. El Basha is so consistently good it’s not a stretch to call it one of the most underrated spots in the city for gyros, kabobs, shawarma and especially falafel.

The falafel at El Basha is firm and flaky in texture and bright green on the inside thanks to a blend of parsley, mint and scallion. The bean cakes are hearty and flavorful; the homemade pickles and sauce made with tahini, a thick sesame seed paste, served on the side set off the herbacious cakes perfectly. I first tried them way back on the third-ever Food Prowl for Falafel, which we did in 2012, and liked them enough to vote them my favorite then. Though I got outvoted in that survey, they remain my favorite.

I like to cut the falafel into pieces and combine it in bites with warm pita and creamy hummus. The hummus, too, is worth raving about. El Basha’s includes chickpeas, sesame paste, lemon juice and lots of garlic. Cut herbs on top — El Basha makes wonderful use of fresh mint, especially — are worth noting.

An order of dolmas arrived warm, and the thick grape leaves, slick with olive oil and lemon juice, encased wonderfully seasoned rice, onion parsley, savory tomato and mint. Each bite had a lovely blend of savory spice and bright citrus.

A gyro platter was the classic version, with big chunks of shaved beef, creamy tzatziki sauce, raw tomatoes, onion and cucumber. My dining partner that night finished off every bit. He liked that sandwich better than the chicken shawarma wrap. It wasn’t bad — it arrives in a grilled wrap, and the inside is spiked with a house-made garlic dressing — but there are more exciting and flavorful moments on the menu.

It seems impossible to get a bite of food at El Basha that’s not seasoned within an inch of its life; not one dish here suffers from the blands. Another thing worth noting: I estimated at least a third of the menu items were meatless, which makes this a fun spot for one of my vegetarian dining partners.

There’s not much to note about the decor at El Basha aside from the many fez hats, which have to do with the restaurant’s name: “The basha” was a term used in the early 1900s to describe society types during the Turkish and Ottoman empires. The basha wore fez hats.

Owner Ahmad Nabulsi has run El Basha for 15 years and lived in Omaha since 1986; he’s originally from Lebanon. The restaurant has been as its current location for about 10 years, he said, and before that was at 84th and Dodge Streets, near Methodist Hospital.

Diners order at the counter — the restaurant does a brisk takeout business —and a waiter brings your order to the table. The service is simple, super fast and friendly. Prices are hard to argue with, and for a group of friends, I never spent more than $40. Everyone left with boxed leftovers, too.

If you like sharing — and I do — you could stick to the “mezza” section of appetizer dishes sized for splitting and be perfectly pleased. We split a bowl of baba ghanoush, rich with smoky eggplant and more tahini, and a second savory bowl of moussaka, a chunky tomato-laden dip with eggplant, whole chickpeas, onions and garlic. We spread both on the restaurant’s crisp-grilled pita.

I liked the dips so much I had to remind myself to quit eating because I had lamb kabobs and a cup of the house lentil soup still on the way.

The restaurant’s lentil soup is rich with spices, and for me, it felt like a chunkier, richer cousin of the Indian soup mulligatawny. Bits of lentil and carrot floated in the mix, a sprinkle of smoky paprika covered the top, and a squeeze of lemon brought necessary brightness.

My lamb had a lovely earthiness, and though sometimes the meat can be too rich for my liking, this wasn’t, with its spicy, seared exterior and firm interior. The kabob plate comes served with meat and chunky vegetables, including onion, tomato and whole mushrooms, everything dusted with more of those bright green, fresh herbs. Golden, spiced rice and a lightly dressed green salad come with the dish, which was not just lovely to look at, but lovely to eat.

I left El Basha that evening feeling satisfied with both the simple dining experience and the wonderfully flavored food. When I have so little to take issue with, one thing is guaranteed: I’ll be back, and soon.

Hits: The falafel at El Basha, with its verdant, herby interior, crispy fried exterior and creamy dipping sauce, is one of the city’s best. Hummus, rich with tahini, is another favorite.

Drinks: Tea, coffee and soda. The restaurant also sells hookahs that customers can use at their tables.

Prices: Incredibly reasonable. Appetizers sized for sharing are between $5 and $7, wraps and sandwiches top out at $9, and entrees sit around $12.

Noise level: A television plays in the corner, but the volume was down on both visits. The restaurant is otherwise quiet.

When the temperature outside is 12 degrees and it feels like 5 below, there’s one place in Omaha — besides in front of your fireplace — where you should be. That place is the original Saigon restaurant off 120th Street and West Center Road, planted in front of a giant steaming bowl of Vietnamese noodle soup.

A most delicious year: Top 10 reviewed restaurants in 2015

Sarah Baker Hansen's top choice was an easy one, and she had enough memorable experiences and dishes in 2015 to round out her 10 favorites spots pretty easily.

Review: Amid successes, flaws at Fleming’s high-end steakhouse are hard to tolerate

It’s easy to run up a bill higher than $200 at Fleming’s, and some of the highs are worth experiencing. But when spending that much, it’s hard to tolerate the lows.

Dining review: Pizza isn't the best in Omaha, but it isn't the worst, either

Co-owner Al Schoenauer said the restaurant tries to make sure its toppings are top-notch, cooking and seasoning all the meats in-house and making its sauce from scratch daily. The creative combinations have been customer hits.

Dining review: A little more spice would be nice, but Burrito Envy satisfies

The restaurant, which opened in December in the spot formerly occupied by Baxter’s pizza at 61st and Maple Streets, has a succinct menu: chips and dips, street tacos, burritos and a short list of tequila, mezcal and Mexican beer.