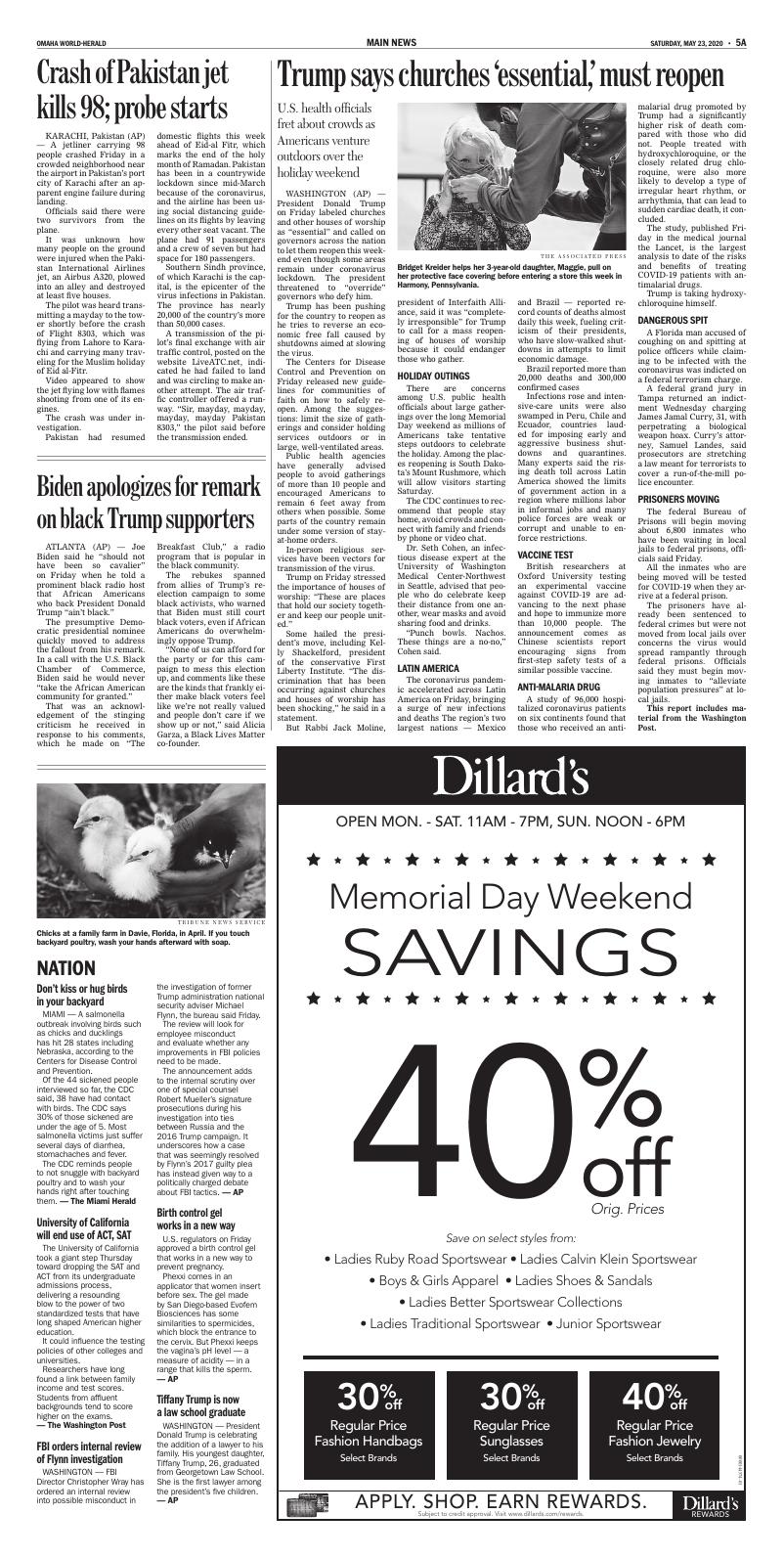 KARACHI, Pakistan (AP) — A jetliner carrying 98 people crashed Friday in a crowded neighborhood near the airport in Pakistan's port city of Karachi after an apparent engine failure during landing.

Officials said there were two survivors from the plane.

It was unknown how many people on the ground were injured when the Pakistan International Airlines jet, an Airbus A320, plowed into an alley and destroyed at least five houses.

The pilot was heard transmitting a may day to the tower shortly before the crash of Flight 8303, which was flying from Lahore to Karachi and carrying many traveling for the Muslim holiday of Eid al-Fitr.

Video appeared to show the jet flying low with flames shooting from one of its engines.

The crash was under investigation.

Pakistan had resumed domestic flights this week ahead of Eid-al Fitr, which marks the end of the holy month of Ramadan. Pakistan has been in a countrywide lockdown since mid-March because of the coronavirus, and the airline has been using social distancing guidelines on its flights by leaving every other seat vacant. The plane had 91 passengers and a crew of seven but had space for 180 passengers.

Southern Sindh province, of which Karachi is the capital, is the epicenter of the virus infections in Pakistan. The province has nearly 20,000 of the country's more than 50,000 cases.

ATLANTA (AP) — Joe Biden said he "should not have been so cavalier" on Friday when he told a prominent black radio host that African Americans who back President Donald Trump "ain't black."

The presumptive Democratic presidential nominee quickly moved to address the fallout from his remark. In a call with the U.S. Black Chamber of Commerce, Biden said he would never "take the African American community for granted."

That was an acknowledgement of the stinging criticism he received in response to his comments, which he made on "The Breakfast Club," a radio program that is popular in the black community.

The rebukes spanned from allies of Trump's reelection campaign to some black activists, who warned that Biden must still court black voters, even if African Americans do overwhelmingly oppose Trump.

"None of us can afford for the party or for this campaign to mess this election up, and comments like these are the kinds that frankly either make black voters feel like we're not really valued and people don't care if we show up or not," said Alicia Garza, a Black Lives Matter co-founder.

Chicks at a family farm in Davie, Florida, in April. If you touch backyard poultry, wash your hands afterward with soap.

Don't kiss or hug birds in your backyard

MIAMI — A salmonella outbreak involving birds such as chicks and ducklings has hit 28 states including Nebraska, according to the Centers for Disease Control and Prevention.

Of the 44 sickened people interviewed so far, the CDC said, 38 have had contact with birds. The CDC says 30% of those sickened are under the age of 5. Most salmonella victims just suffer several days of diarrhea, stomachaches and fever.

The CDC reminds people to not snuggle with backyard poultry and to wash your hands right after touching them. — The Miami Herald

University of California will end use of ACT, SAT

The University of California took a giant step Thursday toward dropping the SAT and ACT from its undergraduate admissions process, delivering a resounding blow to the power of two standardized tests that have long shaped American higher education.

It could influence the testing policies of other colleges and universities.

Researchers have long found a link between family income and test scores. Students from affluent backgrounds tend to score higher on the exams. — The Washington Post

The review will look for employee misconduct and evaluate whether any improvements in FBI policies need to be made.

The announcement adds to the internal scrutiny over one of special counsel Robert Mueller's signature prosecutions during his investigation into ties between Russia and the 2016 Trump campaign. It underscores how a case that was seemingly resolved by Flynn's 2017 guilty plea has instead given way to a politically charged debate about FBI tactics. — AP

U.S. regulators on Friday approved a birth control gel that works in a new way to prevent pregnancy.

Phexxi comes in an applicator that women insert before sex. The gel made by San Diego-based Evofem Biosciences has some similarities to spermicides, which block the entrance to the cervix. But Phexxi keeps the vagina's pH level — a measure of acidity — in a range that kills the sperm. — AP

WASHINGTON — President Donald Trump is celebrating the addition of a lawyer to his family. His youngest daughter, Tiffany Trump, 26, graduated from Georgetown Law School. She is the first lawyer among the president's five children. — AP

Bridget Kreider helps her 3-year-old daughter, Maggie, pull on her protective face covering before entering a store this week in Harmony, Pennsylvania.

WASHINGTON (AP) — President Donald Trump on Friday labeled churches and other houses of worship as "essential" and called on governors across the nation to let them reopen this weekend even though some areas remain under coronavirus lockdown. The president threatened to "override" governors who defy him.

Trump has been pushing for the country to reopen as he tries to reverse an economic free fall caused by shutdowns aimed at slowing the virus.

The Centers for Disease Control and Prevention on Friday released new guidelines for communities of faith on how to safely reopen. Among the suggestions: limit the size of gatherings and consider holding services outdoors or in large, well-ventilated areas.

Public health agencies have generally advised people to avoid gatherings of more than 10 people and encouraged Americans to remain 6 feet away from others when possible. Some parts of the country remain under some version of stayat-home orders.

In-person religious services have been vectors for transmission of the virus.

Trump on Friday stressed the importance of houses of worship: "These are places that hold our society together and keep our people united."

Some hailed the president's move, including Kelly Shackelford, president of the conservative First Liberty Institute. "The discrimination that has been occurring against churches and houses of worship has been shocking," he said in a statement.

But Rabbi Jack Moline, president of Interfaith Alliance, said it was "completely irresponsible" for Trump to call for a mass reopening of houses of worship because it could endanger those who gather.

There are concerns among U.S. public health officials about large gatherings over the long Memorial Day weekend as millions of Americans take tentative steps outdoors to celebrate the holiday. Among the places reopening is South Dakota's Mount Rushmore, which will allow visitors starting Saturday.

The CDC continues to recommend that people stay home, avoid crowds and connect with family and friends by phone or video chat.

Dr. Seth Cohen, an infectious disease expert at the University of Washington Medical Center-Northwest in Seattle, advised that people who do celebrate keep their distance from one another, wear masks and avoid sharing food and drinks.

"Punch bowls. Nachos. These things are a no-no," Cohen said.

The coronavirus pandemic accelerated across Latin America on Friday, bringing a surge of new infections and deaths The region's two largest nations — Mexico and Brazil — reported record counts of deaths almost daily this week, fueling criticism of their presidents, who have slow-walked shutdowns in attempts to limit economic damage.

Brazil reported more than 20,000 deaths and 300,000 confirmed cases Infections rose and intensive-care units were also swamped in Peru, Chile and Ecuador, countries lauded for imposing early and aggressive business shutdowns and quarantines. Many experts said the rising death toll across Latin America showed the limits of government action in a region where millions labor in informal jobs and many police forces are weak or corrupt and unable to enforce restrictions.

British researchers at Oxford University testing an experimental vaccine against COVID-19 are advancing to the next phase and hope to immunize more than 10,000 people. The announcement comes as Chinese scientists report encouraging signs from first-step safety tests of a similar possible vaccine.

A study of 96,000 hospitalized coronavirus patients on six continents found that those who received an anti-malarial drug promoted by Trump had a significantly higher risk of death compared with those who did not. People treated with hydroxychloroquine, or the closely related drug chloroquine, were also more likely to develop a type of irregular heart rhythm, or arrhythmia, that can lead to sudden cardiac death, it concluded.

The study, published Friday in the medical journal the Lancet, is the largest analysis to date of the risks and benefits of treating COVID-19 patients with antimalarial drugs.

Trump is taking hydroxychloroquine himself.

A Florida man accused of coughing on and spitting at police officers while claiming to be infected with the coronavirus was indicted on a federal terrorism charge.

The federal Bureau of Prisons will begin moving about 6,800 inmates who have been waiting in local jails to federal prisons, officials said Friday.

All the inmates who are being moved will be tested for COVID-19 when they arrive at a federal prison.

The prisoners have already been sentenced to federal crimes but were not moved from local jails over concerns the virus would spread rampantly through federal prisons. Officials said they must begin moving inmates to "alleviate population pressures" at local jails. 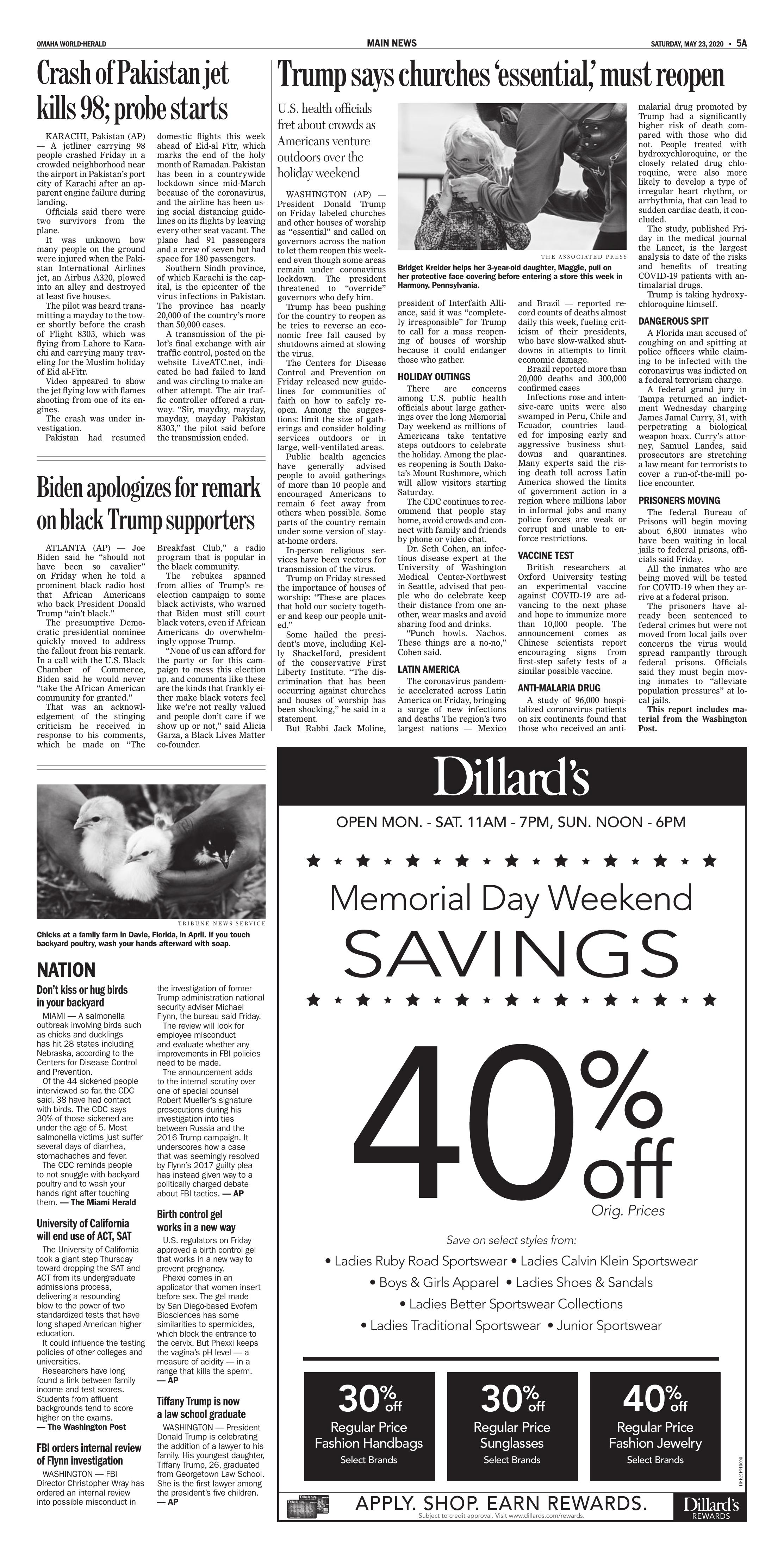