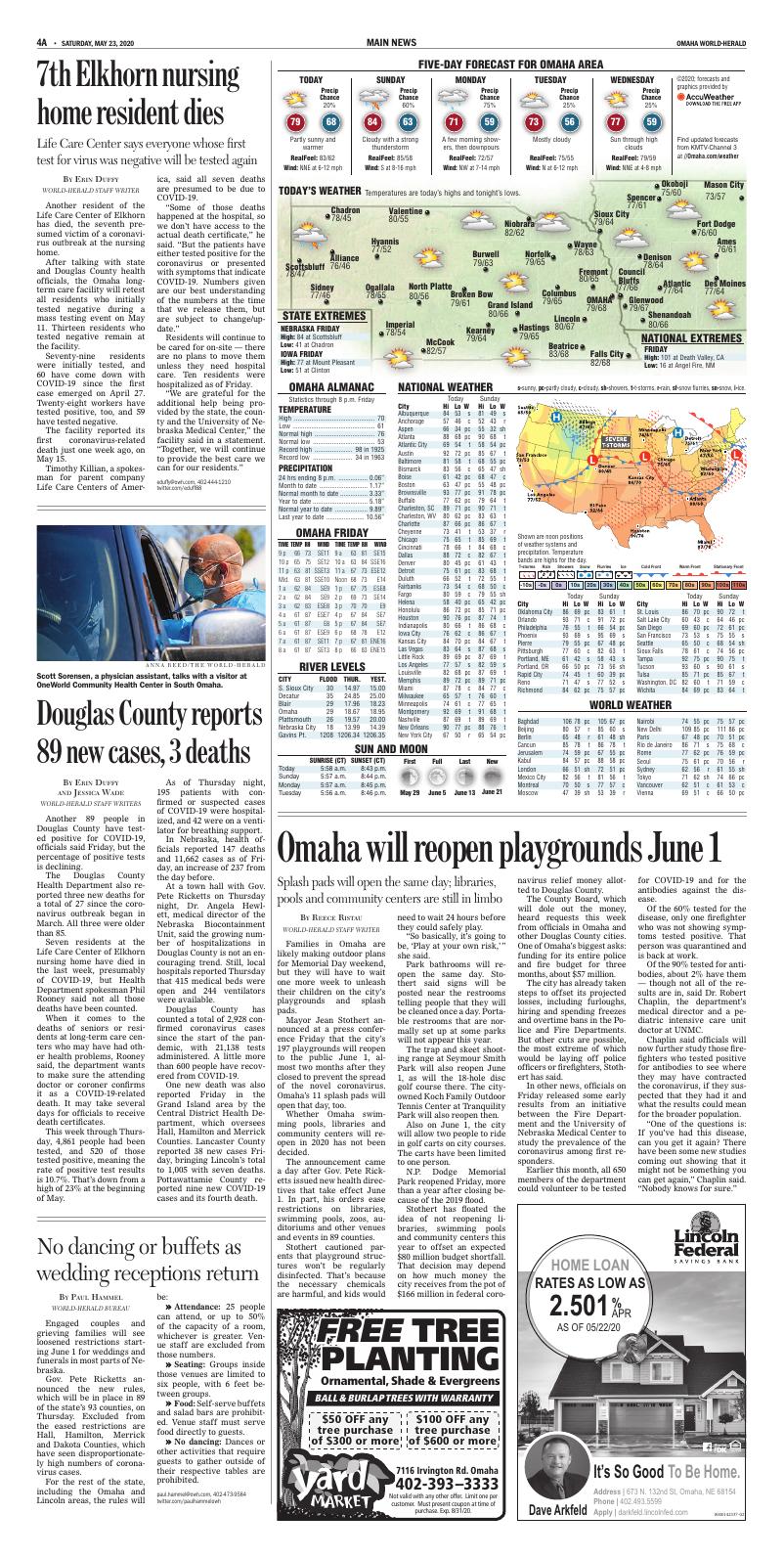 Another resident at the Life Care Center of Elkhorn has died, the seventh presumed victim of a coronavirus outbreak at the nursing home.

Another resident of the Life Care Center of Elkhorn has died, the seventh presumed victim of a coronavirus outbreak at the nursing home.

Seventy-nine residents were initially tested, and 60 have come down with COVID-19 since the first case emerged on April 27. Twenty-eight workers have tested positive, too, and 59 have tested negative.

The facility reported its first coronavirus-related death just one week ago, on May 15.

Timothy Killian, a spokesman for parent company Life Care Centers of America, said all seven deaths are presumed to be due to COVID-19.

“Some of those deaths happened at the hospital, so we don’t have access to the actual death certificate,” he said. “But the patients have either tested positive for the coronavirus or presented with symptoms that indicate COVID-19. Numbers given are our best understanding of the numbers at the time that we release them, but are subject to change/update.”

Residents will continue to be cared for on-site — there are no plans to move them unless they need hospital care. Ten residents were hospitalized as of Friday.

“We are grateful for the additional help being provided by the state, the county and the University of Nebraska Medical Center,” the facility said in a statement. “Together, we will continue to provide the best care we can for our residents.”

Another 89 people in Douglas County have tested positive for COVID-19, officials said Friday, but the percentage of positive tests is declining.

The Douglas County Health Department also reported three new deaths for a total of 27 since the coronavirus outbreak began in March. All three were older than 85.

Seven residents at the Life Care Center of Elkhorn nursing home have died in the last week, presumably of COVID-19, but Health Department spokesman Phil Rooney said not all those deaths have been counted.

When it comes to the deaths of seniors or residents at long-term care centers who may have had other health problems, Rooney said, the department wants to make sure the attending doctor or coroner confirms it as a COVID-19-related death. It may take several days for officials to receive death certificates.

This week through Thursday, 4,861 people had been tested, and 520 of those tested positive, meaning the rate of positive test results is 10.7%. That’s down from a high of 23% at the beginning of May.

As of Thursday night, 195 patients with confirmed or suspected cases of COVID-19 were hospitalized, and 42 were on a ventilator for breathing support.

In Nebraska, health officials reported 147 deaths and 11,662 cases as of Friday, an increase of 237 from the day before.

At a town hall with Gov. Pete Ricketts on Thursday night, Dr. Angela Hewlett, medical director of the Nebraska Biocontainment Unit, said the growing number of hospitalizations in Douglas County is not an encouraging trend. Still, local hospitals reported Thursday that 415 medical beds were open and 244 ventilators were available.

Douglas County has counted a total of 2,928 confirmed coronavirus cases since the start of the pandemic, with 21,138 tests administered. A little more than 600 people have recovered from COVID-19.

Engaged couples and grieving families will see loosened restrictions starting June 1 for weddings and funerals in most parts of Nebraska.

Gov. Pete Ricketts announced the new rules, which will be in place in 89 of the state’s 93 counties, on Thursday. Excluded from the eased restrictions are Hall, Hamilton, Merrick and Dakota Counties, which have seen disproportionately high numbers of coronavirus cases.

For the rest of the state, including the Omaha and Lincoln areas, the rules will be:

Attendance: 25 people can attend, or up to 50% of the capacity of a room, whichever is greater. Venue staff are excluded from those numbers.

Seating: Groups inside those venues are limited to six people, with 6 feet between groups.

No dancing: Dances or other activities that require guests to gather outside of their respective tables are prohibited. 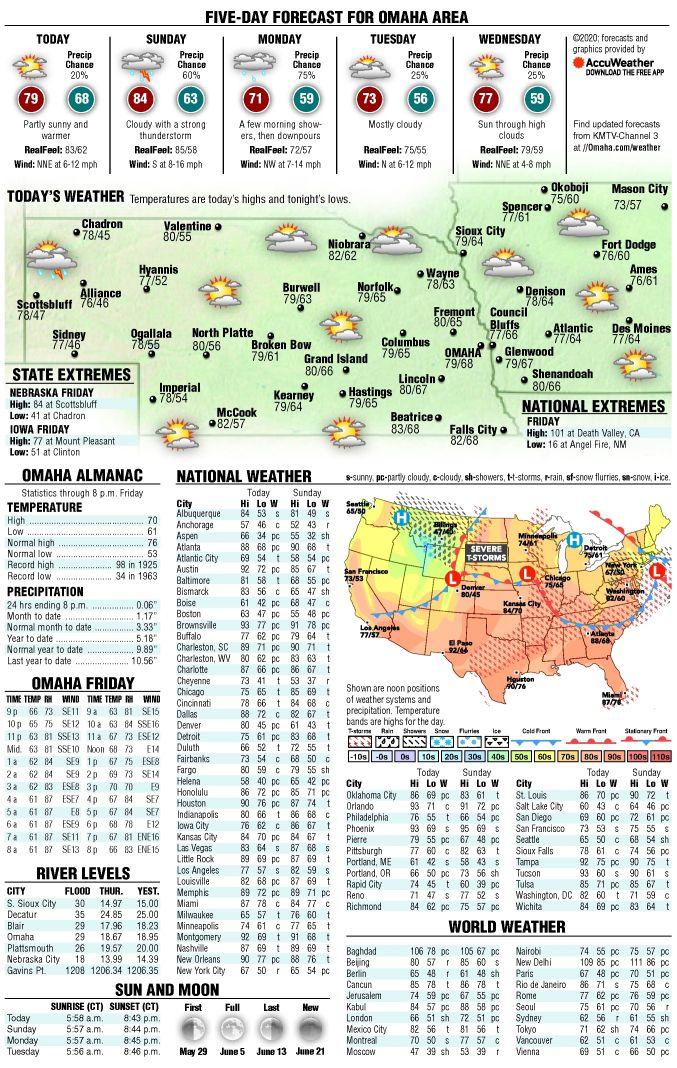 Caution tape wraps the playground at Seymour Smith Park in early April. The city’s 197 playgrounds will reopen to the public June 1.

Families in Omaha are likely making outdoor plans for Memorial Day weekend, but they will have to wait one more week to unleash their children on the city’s playgrounds and splash pads.

Mayor Jean Stothert announced at a press conference Friday that the city’s 197 playgrounds will reopen to the public June 1, almost two months after they closed to prevent the spread of the novel coronavirus. Omaha’s 11 splash pads will open that day, too.

Whether Omaha swimming pools, libraries and community centers will reopen in 2020 has not been decided.

The announcement came a day after Gov. Pete Ricketts issued new health directives that take effect June 1. In part, his orders ease restrictions on libraries, swimming pools, zoos, auditoriums and other venues and events in 89 counties.

Stothert cautioned parents that playground structures won’t be regularly disinfected. That’s because the necessary chemicals are harmful, and kids would need to wait 24 hours before they could safely play.

Park bathrooms will reopen the same day. Stothert said signs will be posted near the restrooms telling people that they will be cleaned once a day. Portable restrooms that are normally set up at some parks will not appear this year.

Also on June 1, the city will allow two people to ride in golf carts on city courses. The carts have been limited to one person.

N.P. Dodge Memorial Park reopened Friday, more than a year after closing because of the 2019 flood.

Stothert has floated the idea of not reopening libraries, swimming pools and community centers this year to offset an expected $80 million budget shortfall. That decision may depend on how much money the city receives from the pot of $166 million in federal coronavirus relief money allotted to Douglas County.

The County Board, which will dole out the money, heard requests this week from officials in Omaha and other Douglas County cities. One of Omaha’s biggest asks: funding for its entire police and fire budget for three months, about $57 million.

The city has already taken steps to offset its projected losses, including furloughs, hiring and spending freezes and overtime bans in the Police and Fire Departments. But other cuts are possible, the most extreme of which would be laying off police officers or firefighters, Stothert has said.

In other news, officials on Friday released some early results from an initiative between the Fire Department and the University of Nebraska Medical Center to study the prevalence of the coronavirus among first responders.

Earlier this month, all 650 members of the department could volunteer to be tested for COVID-19 and for the antibodies against the disease.

Of the 60% tested for the disease, only one firefighter who was not showing symptoms tested positive. That person was quarantined and is back at work.

Of the 90% tested for antibodies, about 2% have them — though not all of the results are in, said Dr. Robert Chaplin, the department’s medical director and a pediatric intensive care unit doctor at UNMC.

Chaplin said officials will now further study those firefighters who tested positive for antibodies to see where they may have contracted the coronavirus, if they suspected that they had it and what the results could mean for the broader population.

“One of the questions is: If you’ve had this disease, can you get it again? There have been some new studies coming out showing that it might not be something you can get again,” Chaplin said. “Nobody knows for sure.”

Our best staff photos from May 2020 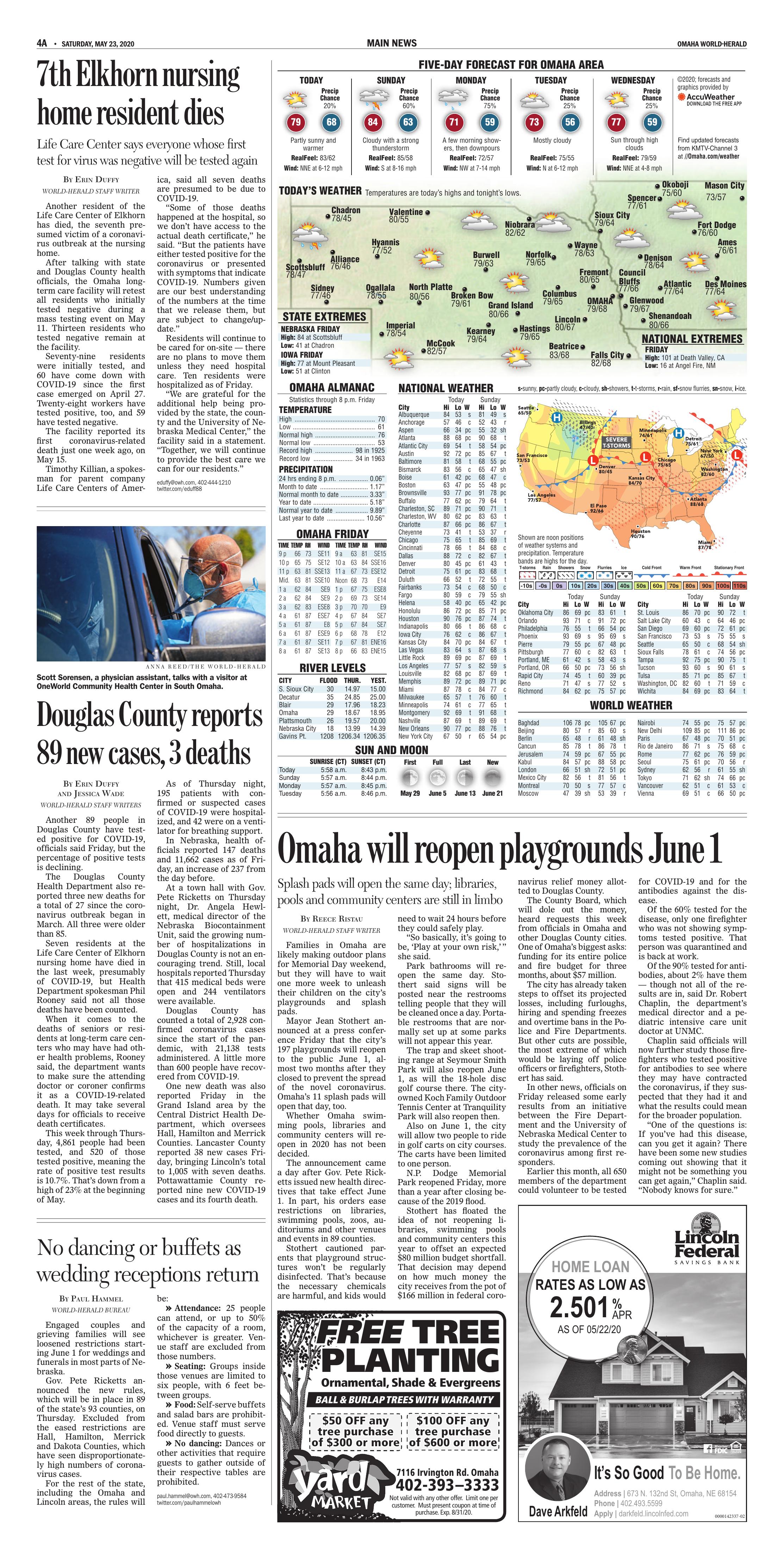