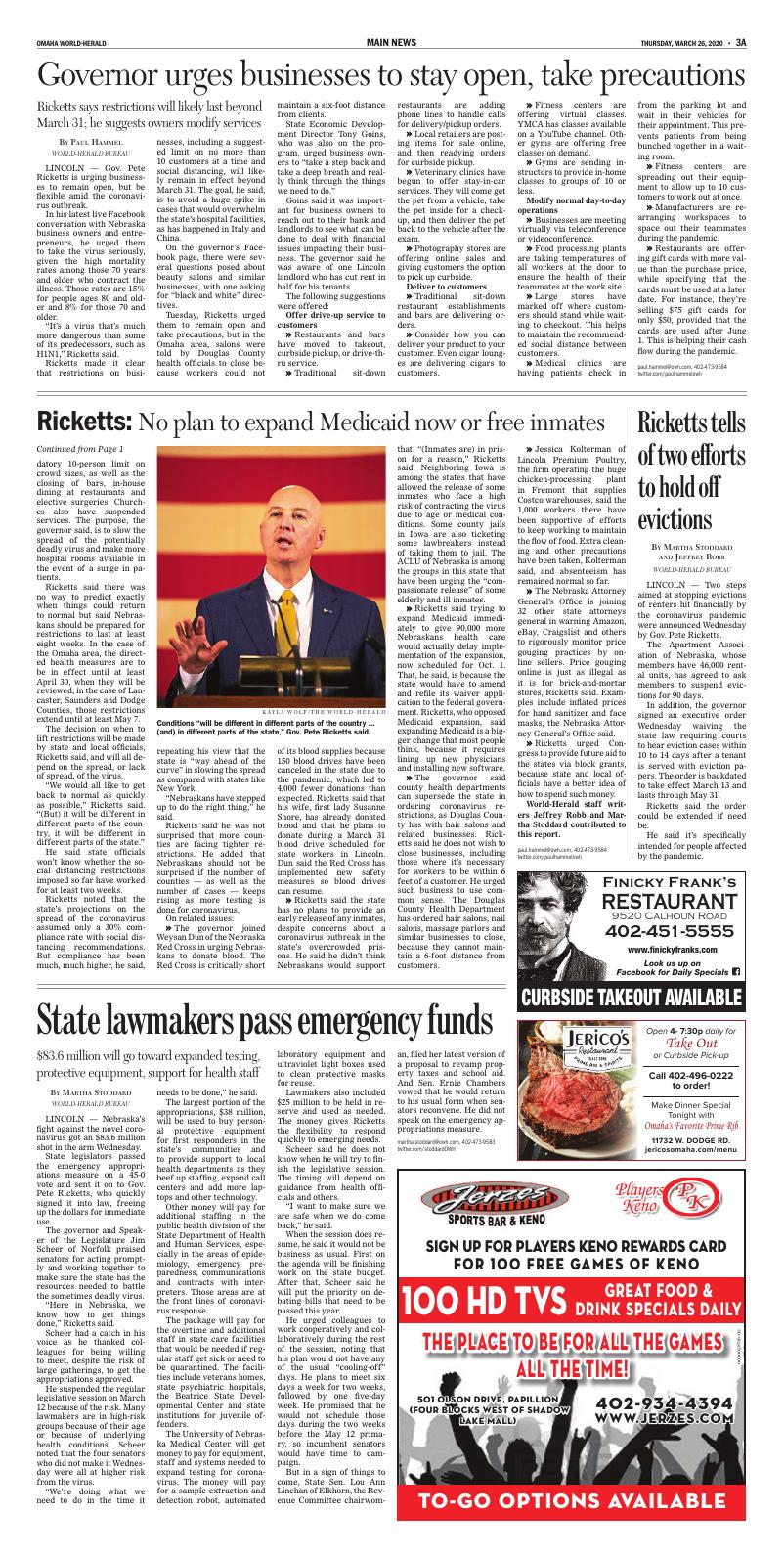 LINCOLN — Don’t expect things to be back to normal by Easter, especially in the Omaha and Lincoln areas, Gov. Pete Ricketts said Wednesday.

The Republican governor, at his daily coronavirus briefing, said restrictions imposed in Douglas, Lancaster and five other counties will extend several days beyond Easter, April 12, and that the spread of the virus will dictate when Nebraska officials ease restrictions there and elsewhere.

That’s all despite President Donald Trump’s expressed desire to have churches “packed again” and the country back open for business by Easter.

“Don’t expect to be in church for Easter,” Ricketts said.

He spoke as the number of coronavirus cases in Nebraska continued to climb, and tighter restrictions on social distancing were being prepared for three more counties.

Six more cases of COVID-19 were identified in Nebraska on Wednesday, including the first instance of community spread in Lincoln and Saunders Counties.

Because community spread cases of coronavirus have now been identified in Lancaster, Dodge and Saunders Counties, those counties are now scheduled to join Douglas, Sarpy, Cass and Washington Counties under state-imposed directed health measures.

Those measures include a mandatory 10-person limit on crowd sizes, as well as the closing of bars, in-house dining at restaurants and elective surgeries. Churches also have suspended services. The purpose, the governor said, is to slow the spread of the potentially deadly virus and make more hospital rooms available in the event of a surge in patients.

Ricketts said there was no way to predict exactly when things could return to normal but said Nebraskans should be prepared for restrictions to last at least eight weeks. In the case of the Omaha area, the directed health measures are to be in effect until at least April 30, when they will be reviewed; in the case of Lancaster, Saunders and Dodge Counties, those restrictions extend until at least May 7.

LINCOLN — Gov. Pete Ricketts is urging businesses to remain open, but be flexible amid the coronavirus outbreak.

In his latest live Facebook conversation with Nebraska business owners and entrepreneurs, he urged them to take the virus seriously, given the high mortality rates among those 70 years and older who contract the illness. Those rates are 15% for people ages 80 and older and 8% for those 70 and older.

“It’s a virus that’s much more dangerous than some of its predecessors, such as H1N1,” Ricketts said.

Ricketts made it clear that restrictions on businesses, including a suggested limit on no more than 10 customers at a time and social distancing, will likely remain in effect beyond March 31. The goal, he said, is to avoid a huge spike in cases that would overwhelm the state’s hospital facilities, as has happened in Italy and China.

On the governor’s Facebook page, there were several questions posed about beauty salons and similar businesses, with one asking for “black and white” directives.

On Tuesday, Ricketts urged them to remain open and take precautions, but in the Omaha area, salons were told by Douglas County health officials to close because workers could not maintain a 6-foot distance from clients.

State Economic Development Director Tony Goins, who was also on the program, urged business owners to “take a step back and take a deep breath and really think through the things we need to do.”

Goins said it was important for business owners to reach out to their bank and landlords to see what can be done to deal with financial issues impacting their business. The governor said he was aware of one Lincoln landlord who has cut rent in half for his tenants.

The following suggestions were offered:

No more eating in: How area restaurants turn to car service after Ricketts' coronavirus order

Want takeout? We're keeping an updated list of restaurants and their services.

The Apartment Association of Nebraska, whose members have 46,000 rental units, has agreed to ask members to suspend evictions for 90 days.

In addition, the governor signed an executive order Wednesday waiving the state law requiring courts to hear eviction cases within 10 to 14 days after a tenant is served with eviction papers. The order is backdated to take effect March 13 and lasts through May 31.

Ricketts said the order could be extended if need be.

He said it’s specifically intended for people affected by the pandemic.

LINCOLN — Nebraska’s fight against the novel coronavirus got an $83.6 million shot in the arm Wednesday.

State legislators passed the emergency appropriations measure on a 45-0 vote and sent it on to Gov. Pete Ricketts, who quickly signed it into law, freeing up the dollars for immediate use.

The governor and Speaker of the Legislature Jim Scheer of Norfolk praised senators for acting promptly and working together to make sure the state has the resources needed to battle the sometimes deadly virus.

“Here in Nebraska, we know how to get things done,” Ricketts said.

Scheer had a catch in his voice as he thanked colleagues for being willing to meet, despite the risk of large gatherings, to get the appropriations approved.

He suspended the regular legislative session on March 12 because of the risk. Many lawmakers are in high-risk groups because of their age or because of underlying health conditions. Scheer noted that the four senators who did not make it Wednesday were all at higher risk from the virus.

Keep informed of all the developments with coronavirus with The World-Herald's complete coverage.

“We’re doing what we need to do in the time it needs to be done,” he said.

The largest portion of the appropriations, $38 million, will be used to buy personal protective equipment for first responders in the state’s communities and to provide support to local health departments as they beef up staffing, expand call centers and add more laptops and other technology.

Other money will pay for additional staffing in the public health division of the State Department of Health and Human Services, especially in the areas of epidemiology, emergency preparedness, communications and contracts with interpreters. Those areas are at the front lines of coronavirus response.

The package will pay for the overtime and additional staff in state care facilities that would be needed if regular staff get sick or need to be quarantined. The facilities include veterans homes, state psychiatric hospitals, the Beatrice State Developmental Center and state institutions for juvenile offenders.

The University of Nebraska Medical Center will get money to pay for equipment, staff and systems needed to expand testing for coronavirus. The money will pay for a sample extraction and detection robot, automated laboratory equipment and ultraviolet light boxes used to clean protective masks for reuse.

Lawmakers also included $25 million to be held in reserve and used as needed. The money gives Ricketts the flexibility to respond quickly to emerging needs.

Scheer said he does not know when he will try to finish the legislative session. The timing will depend on guidance from health officials and others.

“I want to make sure we are safe when we do come back,” he said.

When the session does resume, he said it would not be business as usual. First on the agenda will be finishing work on the state budget. After that, Scheer said he will put the priority on debating bills that need to be passed this year.

He urged colleagues to work cooperatively and collaboratively during the rest of the session, noting that his plan would not have any of the usual “cooling-off” days. He plans to meet six days a week for two weeks, followed by one five-day week. He promised that he would not schedule those days during the two weeks before the May 12 primary, so incumbent senators would have time to campaign.

But in a sign of things to come, State Sen. Lou Ann Linehan of Elkhorn, the Revenue Committee chairwoman, filed her latest version of a proposal to revamp property taxes and school aid. And Sen. Ernie Chambers vowed that he would return to his usual form when senators reconvene. He did not speak on the emergency appropriations measure. 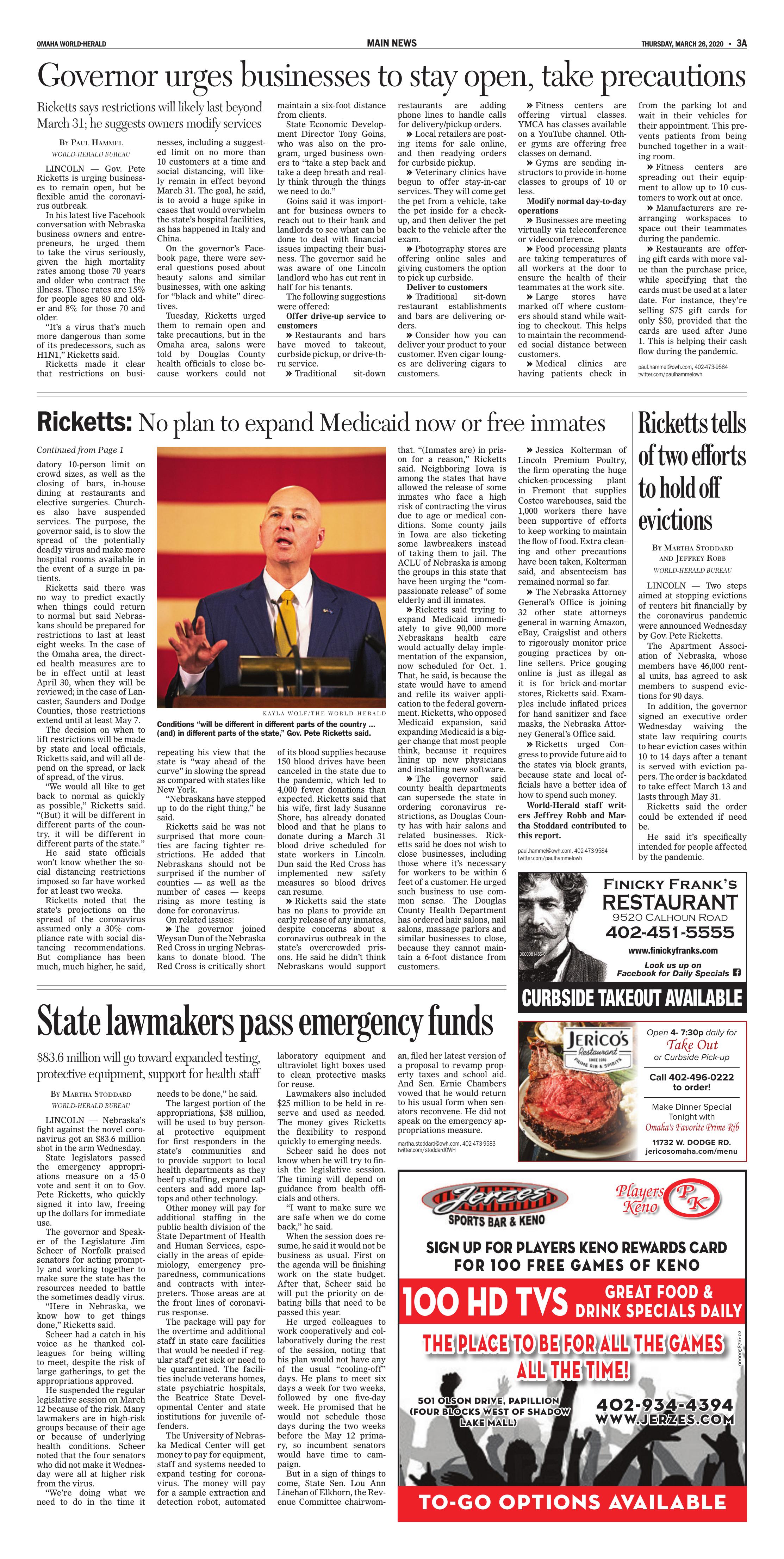