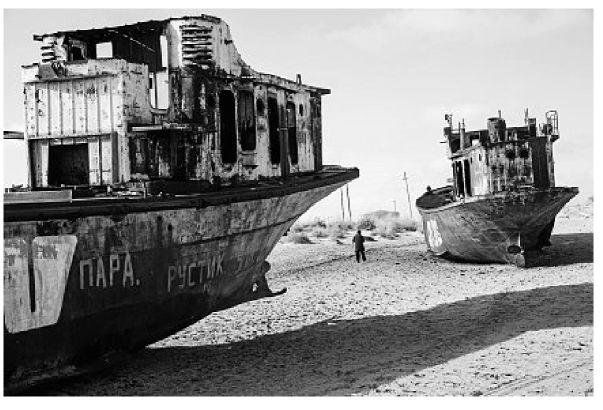 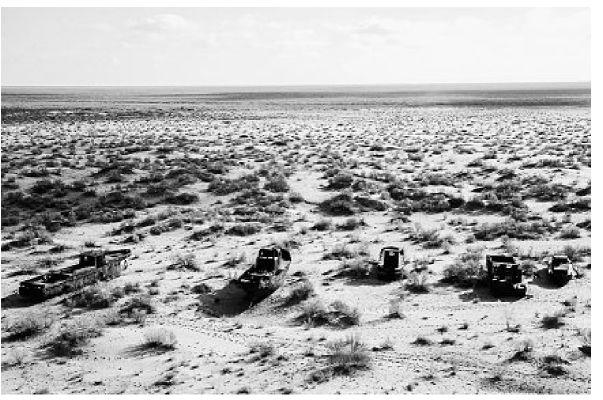 Rusting ships sit in the desert in the former port in Moynaq, Uzbekistan. The area used to be the seabed of the Aral Sea. Nearby nations have taken some promising steps to solve their water crisis: Uzbekistan started a new water-management ministry, and Tajikistan is restructuring the way it oversees water use.

Rusting ships sit in the desert in the former port in Moynaq, Uzbekistan. The area used to be the seabed of the Aral Sea. Nearby nations have taken some promising steps to solve their water crisis: Uzbekistan started a new water-management ministry, and Tajikistan is restructuring the way it oversees water use.

The Aral Sea was once the world's fourth largest inland lake. Today, it's the epitome of environmental malpractice.

More than 60 million people in six nations — Afghanistan, Kazakhstan, Kyrgyzstan, Uzbekistan, Tajikistan and Turkmenistan — rely on the rivers leading to the Aral. In the decades since the fracturing of the Soviet Union, cross-border competition for water, coupled with rapidly accelerating climate change, has made a bad situation worse.

The two rivers that feed the basin, the Amu Darya and the Syr Darya, carry to the Aral about 10% of the water they did before Soviet industrial projects took hold in the 1960s. An ambitious new book, with contributions from 57 authors, describes the damage.

About 17,000 square miles "of the seabed has become exposed and has turned into a vast desert," the researchers write, "which has changed the local climate and intensified desertification in the region." The remaining waters cover just 17% of the sea's original 26,000 square-miles.

The book proposes solutions, from bringing back weather and water monitoring that fell away in the 1990s to new legal agreements that bind the six Central Asian nations into sustainable water management.

Currently, the basin is a beehive of competition among industries and nations that need water for different purposes, and at different times.

Kyrgyzstan and Uzbekistan, however, are cooperating to bank and help manage the seasonal water resource. Kyrgyzstan uses winter run-off to generate power. Downstream, Uzbekistan uses the same water for irrigation in the summer.

The World Resources Institute recently reported that access to water for hundreds of millions of people is now at risk.

Along the Colorado River, climate change is causing aridification - the progression from cyclical drought to a permanent decrease in water - and threatening the welfare of 40 million Americans. In California, the demands of hydropower leaves farmers reliant on limited groundwater. (A new study in the journal Nature Communications suggests that solar and wind energymay be able to take some of the load from hydropower, freeing up surface water for agriculture.)

The challenges involved in restoring and protecting the Aral's resources are substantial. While the nations involved vary in their level of development, an overall loss of expertise and technology over the last two or three decades will require the building of institutions before the problems can even begin to be addressed.

There have been some promising developments, though. Uzbekistan started a new water-management ministry in 2018, and Tajikistan is restructuring the way it oversees water use.

A dam in the northern part of the sea, completed in 2005, helps prevent further drying. That part of the Aral has seen a stabilized water level in the last eight years, making it safe for the reintroduction of 11 fish species.

The situation in the rest of the sea, however, "is less encouraging," the researchers write.