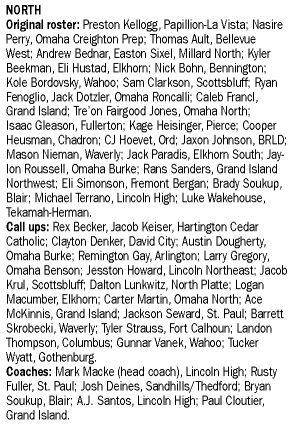 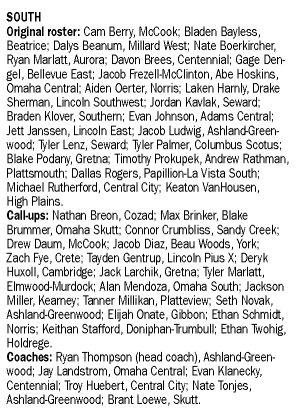 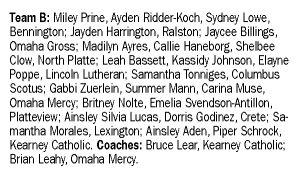 LINCOLN — Rosters for the 62nd Nebraska Shrine Bowl on July 11 in Kearney have a different look compared with the original list in February.

The game was to have been played June 6, then was delayed because of the coronavirus pandemic.

Twenty-two of the original 74 players are not showing up for the July 6 start of training camps in Kearney, mostly because of college football commitments.

The only Nebraska walk-ons still listed as playing are Bladen Bayless of Beatrice, Nate Boerkircher of Aurora, and Braden Klover from Southern, all for the South.

With conditioning a concern since the spring sports season was canceled, rosters also have been expanded to 45 players. The game has a 2 p.m. kickoff at UNK's Cope Stadium to accommodate an NET telecast.

While soccer players didn't get their high school season, many of the top graduating seniors will play in the second annual Nebraska High School Soccer Senior Showcase games July 24 and 25 at Omaha Skutt's Moylan Field.

"There are players from a few schools playing on a different night than their class due to graduations and schedule conflicts,'' Elam said. "We are excited to give these seniors one last chance to play in their high school uniform."

No fans for Metro all-star games

The Metro Basketball Coaches Association is hoping to play its girls and boys all-star games July 19 at Omaha Skutt, with girls at 3 p.m. and boys at 4:30

State guidelines that kick in Wednesday allow basketball as one of the contact sports that can begin practices and games.

Oakland Golf Club is hosting a 36-hole invitational Monday and Tuesday for Class C boys golfers, who lost their season to the pandemic.

Dallas Sweet, who's leaving Oakland-Craig as athletic director for Malcolm, said club members came up with the concept.

All-Nebraska running back Jevyon Ducker of state champion Bellevue West, who will play for Northern Illinois, is the state's only honoree among the 82 members of the 2020 National Football Foundation Team of Distinction.

Criteria to make the team include but are not limited to academic achievement, athletic accolades and community involvement. Each NFF chapter is limited to one honoree, distinguishing the winner as the top scholar-athlete from all the high schools covered by the chapter.

Ducker was the state's Gatorade player of the year and the Greater Omaha Sports Committee's scholar athlete for football.

Lincoln Southeast is looking for a boys basketball coach after Jonah Bradley resigned recently to become an assistant coach at NCAA Division II Winona State. Bradley was at Southeast for three seasons after coaching at Lexington.

The Knights' new girls soccer coach will be Liz Sundberg, an All-Nebraska player at Lincoln Southwest who played a year at NU. She replaces Jim Ageton, whose record including his time as the Knights' boys coach was 109-63. — Stu Pospisil