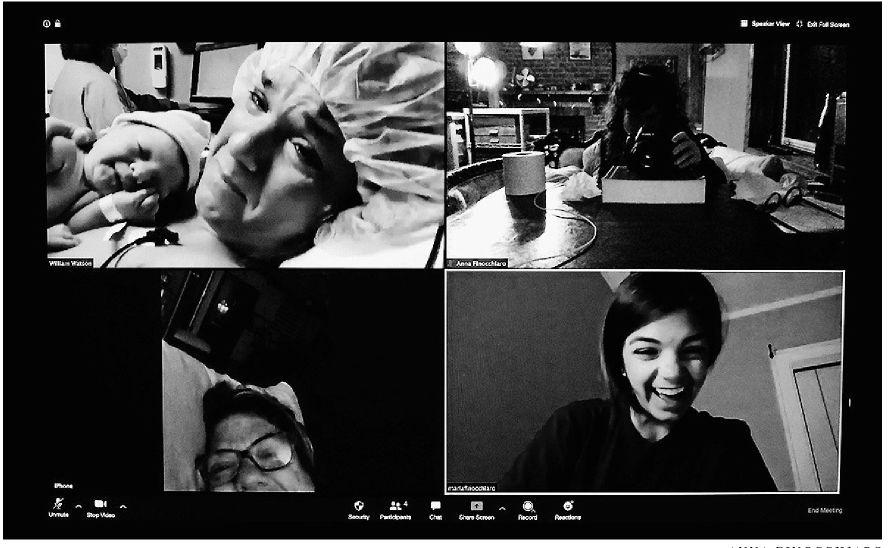 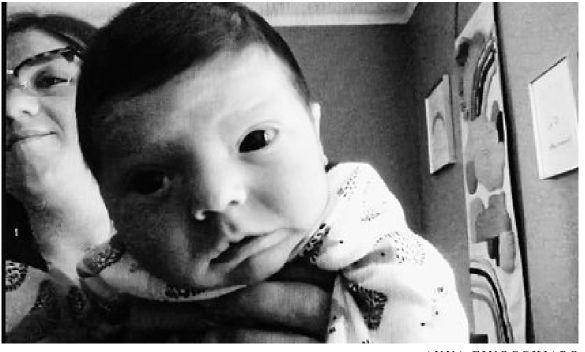 An alert Desi Watson poses in Omaha for his aunt's camera as she takes his picture from her computer screen in New York City.

An alert Desi Watson poses in Omaha for his aunt's camera as she takes his picture from her computer screen in New York City.

A pandemic, even a powerful one that has sickened millions, killed hundreds of thousands, and grounded global economics, can't stop the baby from coming.

Nor can it keep apart two sisters, one a first-time expectant mother in Omaha and the other, a professional photographer in NewYork City with a plane ticket and plans to document the momentous occasion.

Some things must still go on. They just happen differently than planned. So it was on April 11 when Lena Watson entered Methodist Women's Hospital with high blood pressure and a doctor's order to be induced more than two weeks ahead of schedule. Only her husband, Will, could be there in person under hospital rules as the contagious novel coronavirus raged in Omaha and the world.

Anna had moved to New York

City last November to expand her Omaha-based photography business there. She had found a fourmonth sublease on a pretty street in Brooklyn. The apartment was above a bookstore. She was 30, fresh off a summer photography workshop inMaine that had boosted her skills and confidence, and ready to take this next big step in the Big Apple.

Anna had planned to straddle New York and her hometown Omaha, booking photography gigs in both cities, including a spring trip to Omaha for Lena's first baby.

Lena, 32 on Monday, had always wanted to be a mother and had envisioned herself with tons of kids. That journey was not easy and she was grateful — albeit a bit anxious — about this first child growing inside her.

She and Will decided not to learn the gender in advance. They wanted their baby, the first grandchild on Lena's side of the family and second on Will's to be a real surprise. They had booked Anna, who wouldn't have missed this anyway. The due date was April 29.

Anna spent January and February trying to meet people and network in New York, to as she put it, "get my name out there."

Then came March and life in America's biggest city turned upside down as schools and businesses closed and hospitals filled up and people died.

Reflecting on this a few days ago, Anna said she couldn't yet express what it was like to live there and bear helpless witness to so much suffering.

Anna canceled a planned photo shoot in Omaha for a 90th birthday party in late March. She felt terrible for saying no, but didn't think it would be safe or responsible to travel, either by plane or car. Eventually, she shelved all plans to return.

"It became very clear that the safest thing for me to do would be to try to stay put," she said.

At the time, she and Lena held out hope that things could improve in time for Anna to get to Omaha for the baby.

But Omaha's coronavirus trajectory was only beginning to rise. Lena's health was speeding up the delivery date. And because of the pandemic, Anna wouldn't have been allowed inside the hospital anyway to take photos.

So Anna pitched an idea to her sister: What if they tried photography by Zoom?

It wouldn't be the same, of course, just as school, business meetings and friend happy hours aren't the same when seen on a Brady Bunch-like grid. But it would be something.

Lena signed off but with a few rules. First, the focus would be on the birth and not the process of recording it. Fine, Anna said. She never wants the camera to intrude. Lena and Anna agreed that theywould not interruptmedicine and nature for the sake of art. Anna promised she'd put herself on "mute" and close the Zoom portal whenever Lena requested.

The sisters did a dry run the night before. They positioned Will's iPad in the living room and then the nursery and then in the bedroom. Lena in Omaha and Anna in New York clicked on the same link.

Behold the wonders of technology. A portal opened to Omaha. Anna readied her camera in New York. Click and the expectant parents on birth eve. Click and a beautiful silhouette of the expectant mother, her belly a giant curve against the window.

The next day, Will set up the iPad in Lena's hospital room at Methodist Women's. Anna rested her Canon atop the thickest book she could find in this subleased apartment in Brooklyn. It was a Rolling Stone anthology of rock music. She wanted the camera absolutely steady as she aimed at her screen.

Labor was long. The baby did not immediately come. After more than 12 hours, Lena was prepped for a C-section. Anna captured all of it through that marathon Zoom.

As she clicked in New York, Anna wept, using that precious coronavirus commodity, a roll of toilet paper, to mop up her tears. As she birthed in Omaha, Lena wept.

At 10:55 p.m., Desi Matteo Watson took his first breaths outside the womb. He weighed 7 pounds, 14 ounces. He stretched 19 inches long. His skin was dark pink and he had a mop of dark hair on his head. Anna clicked and clicked and clicked.

Outside her apartment in New York and that hospital room in Omaha was a lot of pandemic dread. A drumbeat of bad news. Uncertainty about the future. A lot of fear.

But inside this too-bright surgical room was a miracle of new life. A baby was born. A woman and man had become Mom and Dad. A sister was a new aunt. And though physical distance separated them, screens and a camera put them into the same time and space.

Anna dutifully documented it all, taking care to frame her shots to include the fact she was shooting what she saw on her laptop. The pandemic is a part of Baby Desi's story. Physical separation is part of it, too, which is what makes the final shot so poignant.

It shows four squares of a Zoom meeting, four scenes of four Finocchiaro women sharing in the birth.

Starting in the top left corner is the new mother, teary Lena, in the hospital with a surgical cap on her head and newborn son in her arms. Working counterclockwise, we see the new nana, family matriarch Lisa Finocchiaro, smiling from her Omaha pillow. Then there's new aunt Maria Finocchiaro, a nurse practitioner in Omaha wearing a big, happy grin. Finally, in the upper right corner is a portrait of the artist, Aunt Anna, squinting behind the Canon perched on a rock-and-roll book in an apartment in a distant city that, right at that moment, was not so far away.

A pandemic can do a lot of terrible things. But at that moment, not even the mighty coronavirus could keep this family apart.

Nor could it stop the cycle of life.