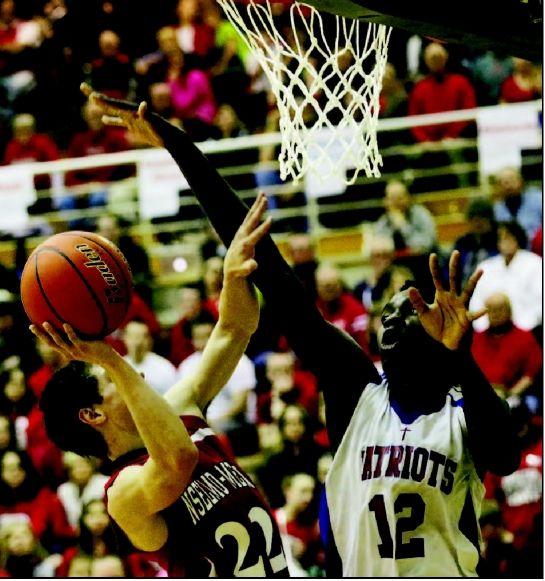 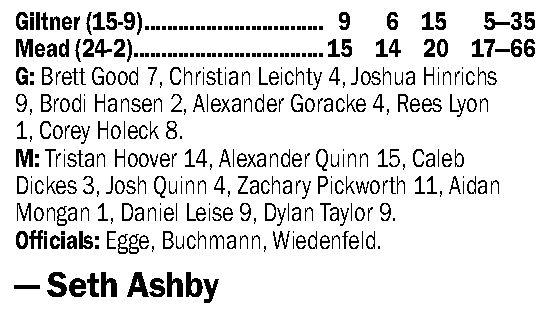 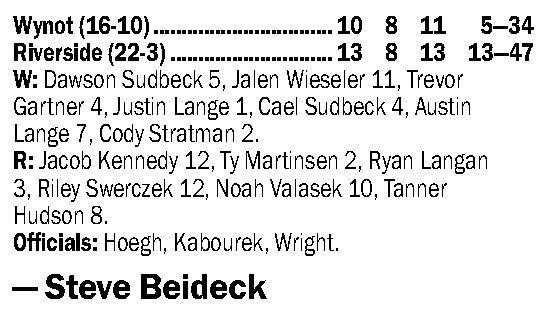 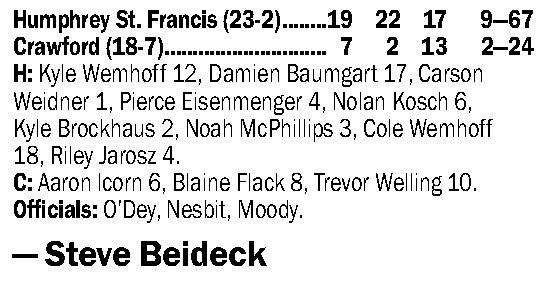 LINCOLN — When Henry Tanksley wasn't getting 28 points or Nosa Iyagbaye 22 rebounds, Tucker Pinyan was putting the hurt on Anselmo-Merna, too.

Pinyan scored 14 of his 17 points in the final quarter, including back-to-back 3s that extended the Patriots' lead from eight to 14 points, as Parkview beat Anselmo-Merna 63-39 in the Class D-2 first round at Lincoln Northeast.

It was the state tournament debut for Parkview, which opened in 1980. A sluggish first half was the result, coach Garth Glissman said.

"That was not us. We pressed, we didn't play the team basketball we had all year long," Glissman said. "We stress ball movement, and the first half we took turns trying to beat people off the dribble and made uncharacteristic mistakes.

"They want to do so well they were just pressing."

"I got in a rhythm and let it fly," said the sophomore, who has more than 70 3s this season. "My teammates found me and fed it to me."

"When you're playing someone that athletic, you can't take too many focus breaks or they see the cracks in the defense and get through them," Coyotes coach Brent Myers said. "They took the game over. We couldn't keep a body in front of (Tanksley). We did pretty good up top, but it seemed the second or third guy were always a step slow getting there."

Mead overcame a slow start to earn its first state tournament win since 2009 at the expense of the Hornets, who turned the ball over 24 times. Mead broke off a 20-2 run in the first half to pull away.

"Part of it was that we started to get some stops, which helped," Mead coach PJ Quinn said. "We were almost over guarding them and letting them get some back cuts and some penetration. The other thing is, the ball just started to go into the basket for us."

It appeared for a moment that if Mead kept turning the ball over, Giltner would be able to put pressure on the Raiders.

But it was the Hornets' turnovers that proved to be the difference. With the game tied 9-9, Giltner's offensive production came to a halt against the Mead defense, as it turned the ball over three times in the final 30 seconds of the first quarter to bring its first-period turnover total to eight.

"They were super impressive. They're one of the best defensive teams I've seen since I started coaching," Giltner coach Matt Drew said. "They're well-coached. We knew we'd have our hands full. I tip them the hat, they were a very good team."

Mead's flurry of transition points off turnovers and ball movement in its half-court sets resulted in the 20-2 run that simmered the Giltner upset bid. The Raiders finished with 23 field goals on 14 assists.

After seeing an early lead disappear Thursday, Riverside quickly got it back and never let it go. If the No. 3 Chargers looked a bit sluggish, coach Joe Imus said there was a reason.

"We had a flu bug go through this week," Imus said. "We looked a little tired."

Starting the fourth quarter with a 9-2 run, Riverside led 43-31. The Chargers defense gave up five points in the final eight minutes.

No. 2 Humphrey St. Francis outscored Crawford 22-2 in the second quarter. After racing to a 19-7 lead after the first quarter, the Flyers (24-2) removed any mystery about the outcome of the game at Lincoln East with the second-quarter blitz.

St. Francis scored 21 straight to start the second period before sophomore forward Trevor Welling scored the 18-7 Rams' only points of the quarter with 1:04 remaining before halftime. Welling led the Rams with 10 points.

"I expected us to play well but I didn't think it would be like this," Flyers coach Eric Kessler said. "We've been practicing for two weeks, and that's hard to do at this time of the season."