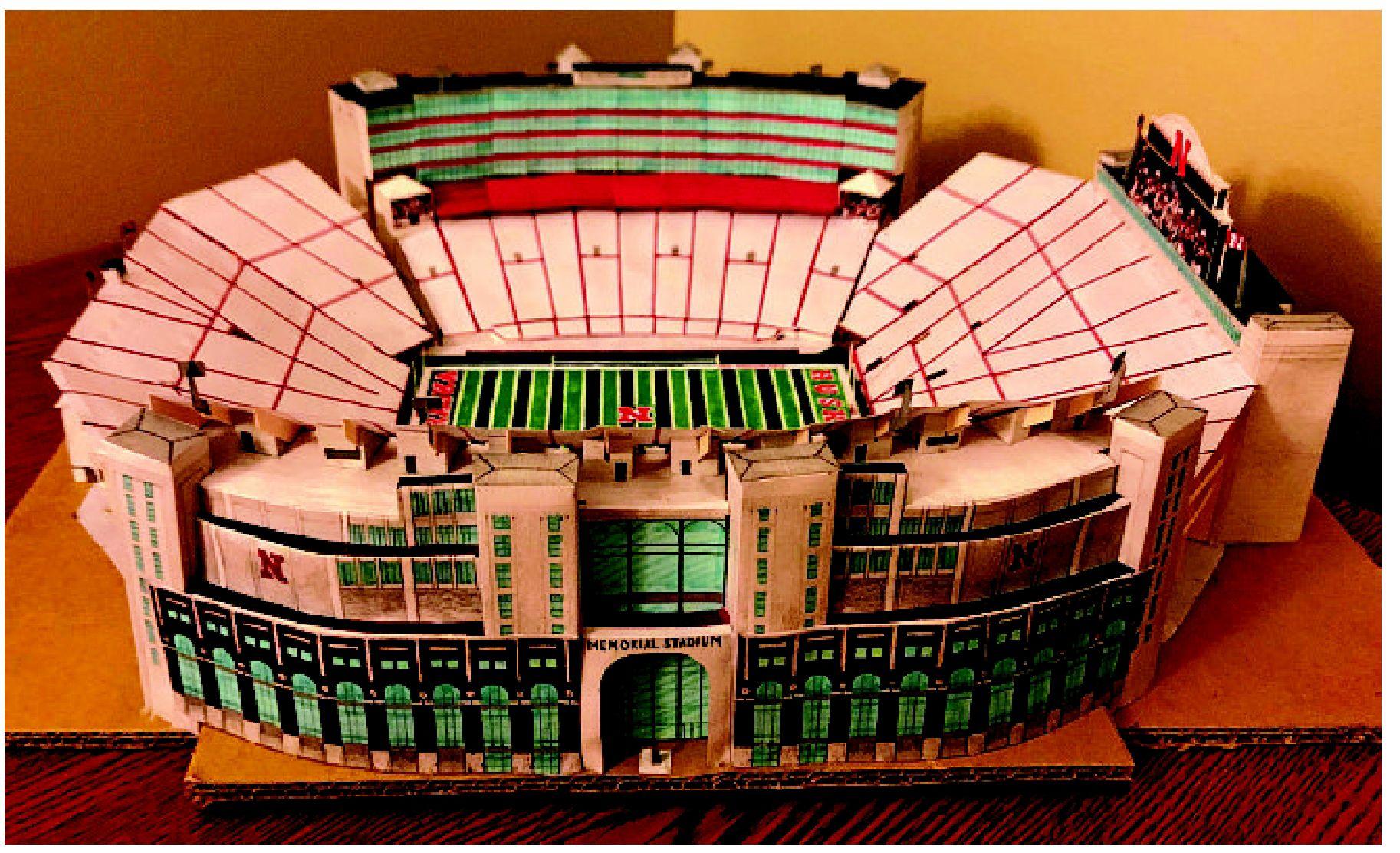 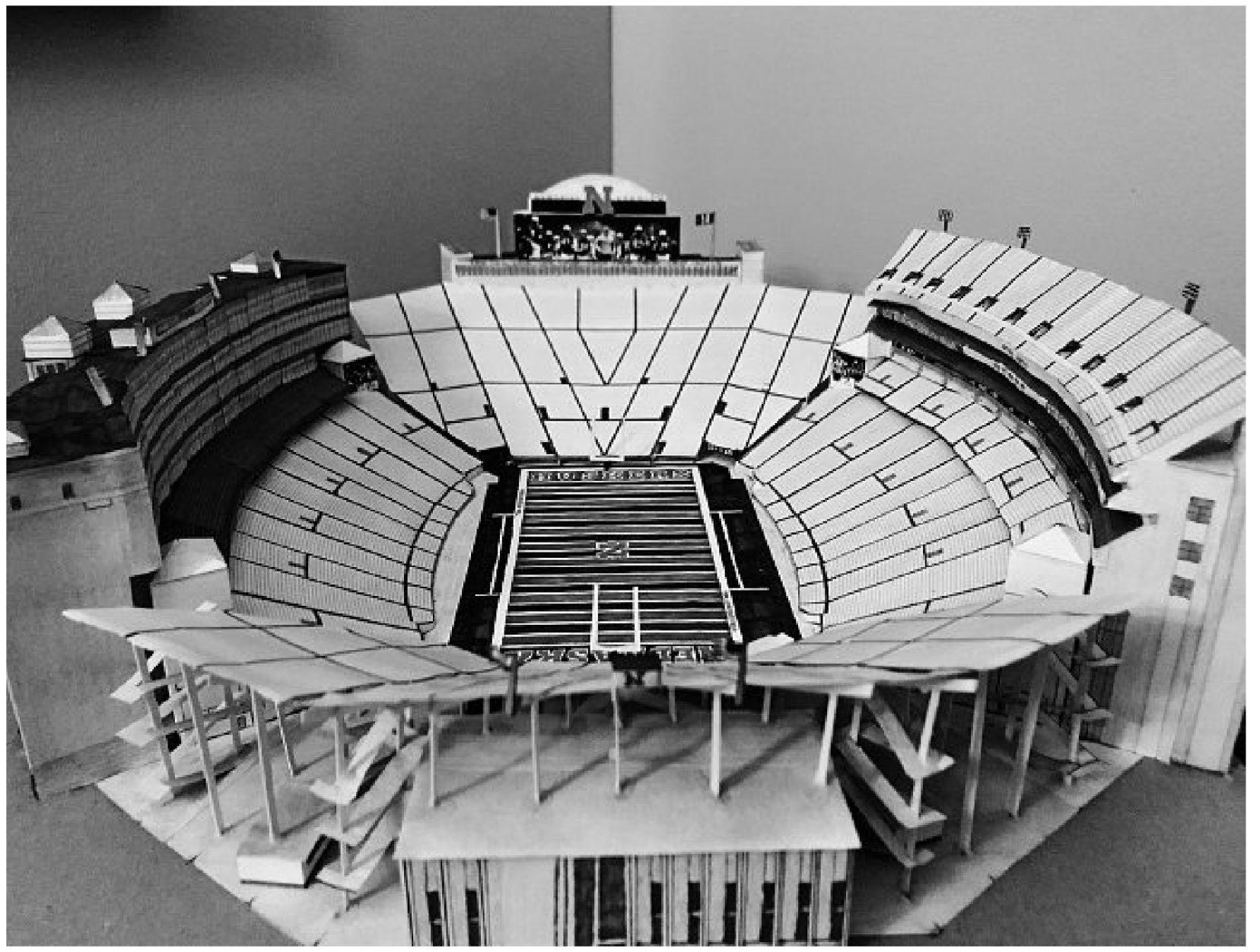 Trey Ashby puzzled over the goal posts as he ate a cookie one night. The paper plate it was on gave him the answer. 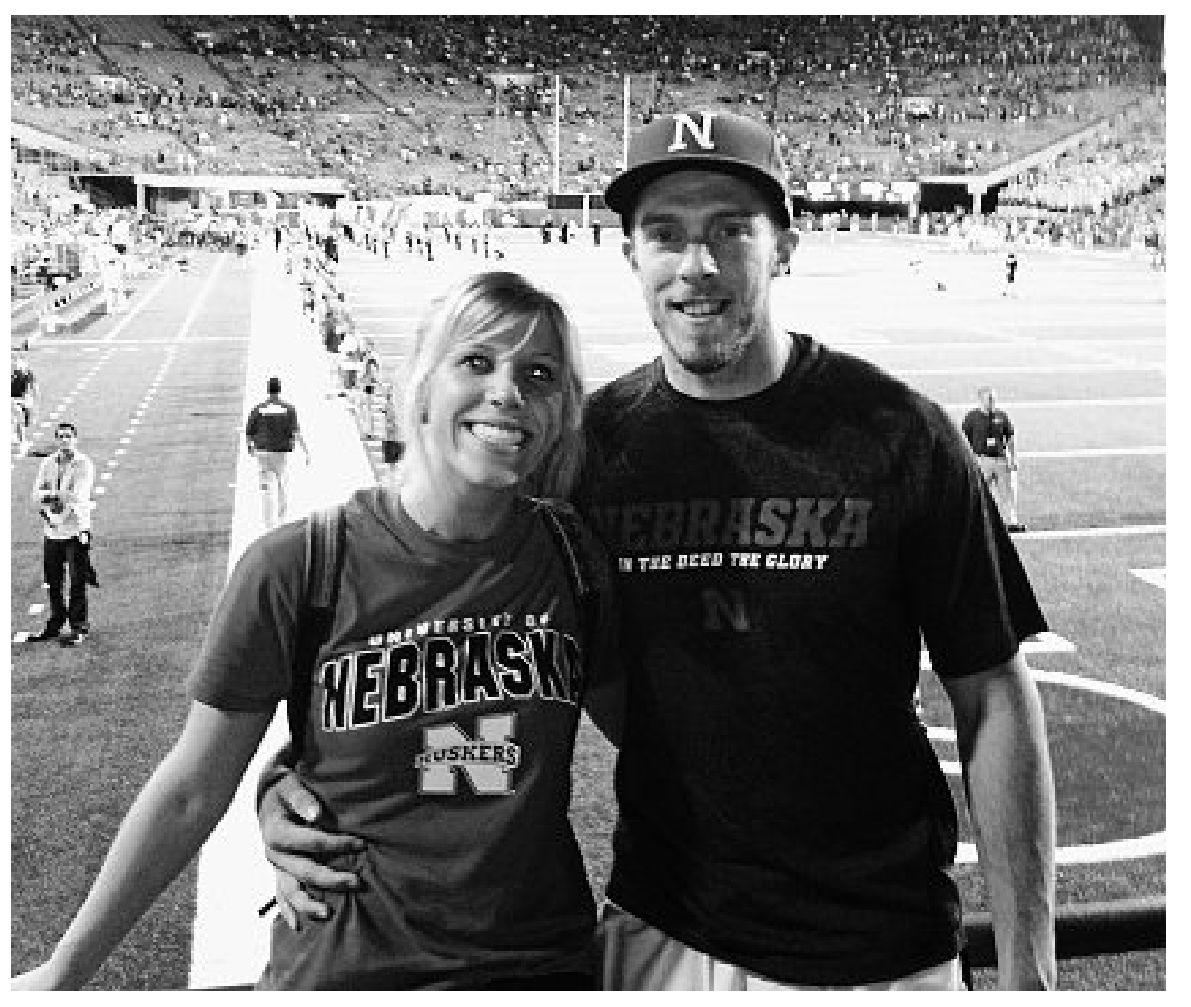 Samantha and Trey Ashby at a Nebraska game. The Ashbys have seats in South Stadium, so that part of his paper replica is a bit more detailed.

Trey Ashby puzzled over the goal posts as he ate a cookie one night. The paper plate it was on gave him the answer.

Samantha and Trey Ashby at a Nebraska game. The Ashbys have seats in South Stadium, so that part of his paper replica is a bit more detailed.

You'd be hard-pressed to squeeze 90,000 Husker fans into this Memorial Stadium.

It's just scaled down. And made entirely of paper products.

David Ashby, who goes by Trey to family and friends, spent nearly three months reproducing the tiniest details of Memorial Stadium into a paper replica.

The Papillion man wrapped up the project this week.

Ashby, 30, said he's always been interested in stadiums. He held onto a binder full of his junior high drawings of different stadiums. In recent years, he's toyed around with building stadiums he designed out of paper.

Last year, he built a replica of Rosenblatt, the former home of the College World Series. It isn't quite as detailed as his new Memorial Stadium. Ashby said he did pay attention to detail, making sure the ballpark included flags of all teams who played in the last College World Series held there.

He sent updates to a buddy as he worked on the ballpark. It took him about three months to build that replica.

That friend encouraged Ashby to share construction updates from the Memorial Stadium replica on Twitter. He grew a steady following. And as he finished parts of the project, he sent photos and shared fun facts he learned along the way.

To build the replica - it's 20 inches by 15 inches and about 6 inches tall - Ashby consulted Google Earth. He was able to zoom in on the 3D images to scale the stadium as accurately as possible.

The structure of the replica is held up by pieces of manila envelopes. Things that aren't weight-bearing were made from white printer paper or white construction paper. (No newspapers were harmed in the making of the stadium.)

Ashby, a physical education teacher in the Omaha Public Schools, fumbled when it came to the goal posts. He needed something sturdier than your standard piece of paper. Then it clicked: He could use a paper plate, just like the one he was eating a cookie off of one night.

Much of the work was done by trial and error. He cut pieces larger than he expected to need and trimmed them to fit.

To get the details right, he snapped photos during a trip to the stadium with his 4 and 1-year old sons. He has the sellout streak written on the mezzanine. Outlines of statues dot the outside of the stadium, including one of Tom Osborne and Brook Berringer.

"I think that's what makes it cool. Getting down to every tiny detail," Ashby said.

From start to finish, the project took about 12 weeks. He spent about an hour each night for five nights a week working on the project.

The stadium caught Larry the Cable Guy's eye on Twitter. And Runza added that it's meat-filled sandwiches were the only thing missing from the replica.

Right now, the stadium fits nicely in a file cabinet for safekeeping. Ashby may display it, but he's also open to selling the replica if the right offer comes along.

Ashby has been a Husker fan all his life. Growing up in the '90s, he said Husker football is an institution for him. He keeps a shoebox stuffed with tickets from Husker games. When he and his wife were into antiquing, they picked up a handful of Husker items, including a pennant from 1971.

Now he shares season tickets with his family in South Stadium. (That part of the replica is particularly detailed.) For away games, his family goes to his parents' house for viewing parties.

"It's not just some game kids are playing on a field. It's something that brings the community together and brings families together," Ashby said. "I don't think it's ridiculous to say that football's a part of your life, even being just a fan."