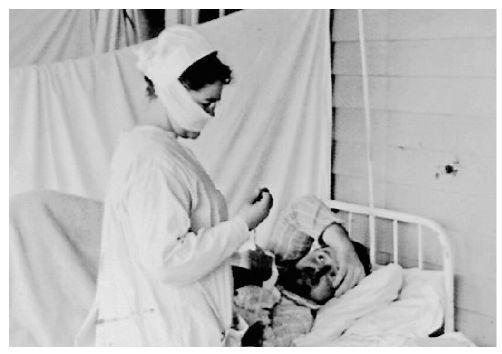 An influenza ward at Walter Reed Hospital in Washington, D.C., on Nov. 1, 1918. The COVID-19 pandemic has inspired lots of comparisons to the 1918 flu, sometimes called the Spanish flu.

An influenza ward at Walter Reed Hospital in Washington, D.C., on Nov. 1, 1918. The COVID-19 pandemic has inspired lots of comparisons to the 1918 flu, sometimes called the Spanish flu.

The novel coronavirus has taken just a few months to sweep the globe. How many will die, how societies will change — those questions are impossible to fathom as the disease rages. But history shows that past pandemics have reshaped societies in profound ways. Hundreds of millions of people have died. Empires have fallen. Governments have cracked. Generations have been annihilated. Here is a look at how pandemics have remade the world.

Cause: Measles and smallpox

Many historians trace the fall of the Roman Empire back to the Antonine Plague, which swept Rome during the reign of Marcus Aurelius. Nobody has ever nailed down the exact cause, but symptoms recorded by a physician named Galen — gruesome skin sores, high fever, diarrhea and sore throats — strongly suggest it was smallpox and measles. How'd it get there? Armies and tradesmen returning from Asia. More than 2,000 people died daily. "The ancient world," one scholar wrote, "never recovered from the blow inflicted upon it by the plague."

Thought to be the world's first episode of bubonic plague, its namesake was the Byzantine emperor who was in power when it hit, likely arriving in the form of infected fleas hitching rides across the world on the backs of rodents. Frank M. Snowden, a Yale historian who studies pandemics, wrote in his book "Epidemics and Society" that definitive accounts of this plague have largely vanished. However, diaries from Procopius, a noted historian then, indicate that many thought the end of civilization was upon them. "A pestilence," Procopius wrote of the plague, "by which the whole human race was near to being annihilated." Researchers are still digging up evidence connected to the plague all these years later. "Scientists working in Bavaria in 2005," Snowden wrote, "identified the plague bacillus in skeletal remains from a sixth-century cemetery at Ascheim, strongly suggesting that the traditional diagnosis of bubonic plague is accurate."

History Today, a monthly magazine of historical writing published in London, calls this pandemic "the greatest catastrophe ever." The number of deaths — up to 200 million — is astounding. Put it this way: That would be like wiping out roughly 65% of the current U.S. population. (COVID-19 disease modeling predicts U.S. deaths to potentially reach 240,000.) Like the Plague of Justinian, the Black Death was caused by the bubonic plague. The swift spread of the disease continues to astonish historians and epidemiologists. "The central explanation lies within characteristic features of medieval society in a dynamic phase of modernization heralding the transformation from a medieval to early modern European society," Ole J. Benedictow, a University of Oslo historian, wrote in History Today. Big ships carried goods across ever-widening shipping routes throughout Europe and beyond. "This system for long-distance trade was supplemented by a web of lively short and medium-distance trade that bound together populations all over the OldWorld," Benedictow wrote, dubbing this the "golden age of bacteria."

Explorers arrived in the New World bearing more than just turnips and grapes. They also brought smallpox, measles and other viruses for which New World inhabitants had no immunity. "Although we may never know the exact magnitudes of the depopulation, it is estimated that upwards of 80-95 percent of the Native American population was decimated within the first 100-150 years following 1492," according to a 2010 paper in the Journal of Economic Perspectives. "Historian and demographer (Noble) David Cook estimates that, in the end, the regions least affected lost 80 percent of their populations; those most affected lost their full populations; and a typical society lost 90 percent of its population."

Again, blame the rats with those pesky fleas on their backs: "They were attracted by city streets filled with rubbish and waste, especially in the poorest areas," according to the National Archives in England. While doctors, lawyers and royalty fled town, the poor were ravaged by the disease. "Watchmen locked and kept guard over infected houses," the National Archives said. "Parish officials provided food. Searchers looked for dead bodies and took them at night to plague pits for burial." Therewere no treatments. If you caught it, you had roughly two weeks to live. This caused people to become desperate. "Sometimes, patients were bled with leeches," the National Archives said. "People thought impure air caused the disease and could be cleansed by smoke and heat. Children were encouraged to smoke to ward off bad air. Sniffing a sponge soaked in vinegar was also an option."

Few societies have been spared by this highly infectious bacteria, which is transmitted via feces-contaminated water and causes severe diarrhea and vomiting. The epidemic that swept London in 1854 spawned the sort of epidemiological investigations that take place in disease outbreaks today. That's thanks to John Snow, an English physician who almost single-handedly took on the bacteria. While some scientists suspected cholera was transmitted through the air, Snow thought otherwise. "Through carefully mapping the outbreak, he finds that everyone affected has a single connection in common: they have all retrieved water from the local Broad Street pump," according to a CDC history. He ordered the pump handle turned off, and people stopped getting sick.

This viral infection is endemic to South America and sub-Saharan Africa. Spread by female mosquitoes, the disease gets its name because it often turns the skin of sufferers a distinct shade of yellow. In 1793, yellow fever swept through Philadelphia, then the nation's capital, killing roughly 10% of the population. President George Washington and Secretary of State Thomas Jefferson high-tailed it out of town, ultimately settling on Washington as the nation's capital. Back then, nobody knew exactly how and why people came down with yellow fever. It wasn't until 1900 that U.S. Army researchers "pinpointed mosquitoes as the transmission vector for the disease," according to a vaccine history project at the College of Physicians of Philadelphia.

The COVID-19 pandemic has inspired lots of comparisons to the 1918 flu, sometimes called the Spanish flu, which got its name not because it originated in Spain but because it was World War I, and Spain was the only country being honest about the toll the pandemic took on the country. The flu came in two waves, starting in 1918 and ending in 1920. The number of infected is staggering — asmany as 500 million, with estimates of 50 million deaths worldwide, according to the CDC. Isolation and quarantines were used to slow transmission. Even President Woodrow Wilson was stricken, nearly derailing talks at the Paris Peace Conference, where the flu left him bedridden for days.

One man saw it coming: Maurice Hilleman. The doctor later regarded as the godfather of vaccines was working at the Walter Reed Army Institute of Research in 1957 when he read a New York Times article about a nasty flu outbreak in Hong Kong that mentioned glassyeyed children at a clinic. "Something about their eyes tipped him off," according to Smithsonian Magazine. "His gut told him that these deaths meant the next big flu pandemic." Hilleman requested that samples of the virus be shipped to U.S. drugmakers right away so they could get a vaccine ready. Though 70,000 people in the United States ultimately died, "some predicted that the U.S. death toll would have reached 1 million without the vaccine that Hilleman called for," according to the Philadelphia vaccine history project. "Health officials widely credited that vaccine with saving many lives."

Before COVID-19, this was the world's most recent pandemic, infecting as much as 21% of the world's population. Swine flu was a hodgepodge of several different flu strains that had never been collectively seen together. Most of those infected by swine flu were children and young adults, with older people — those most at risk of dying from the flu — immune to it already.