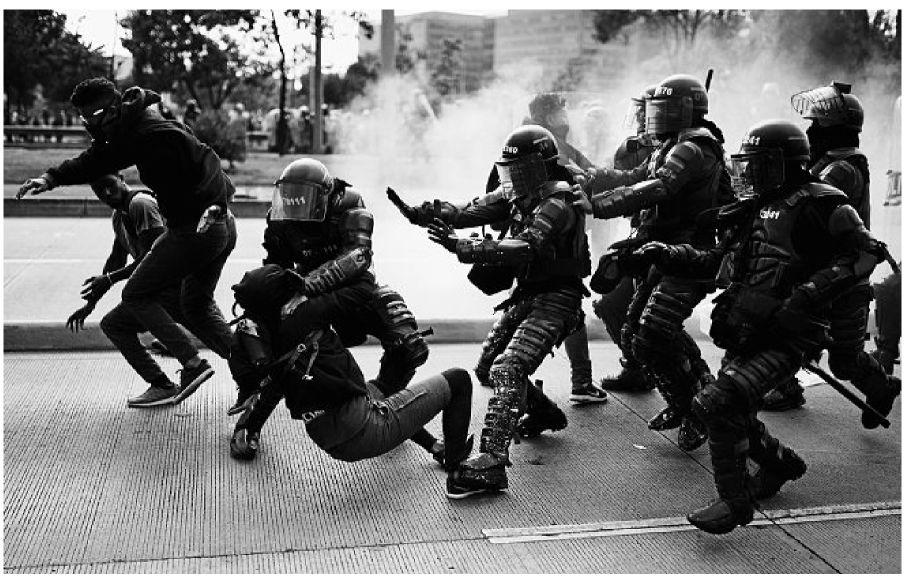 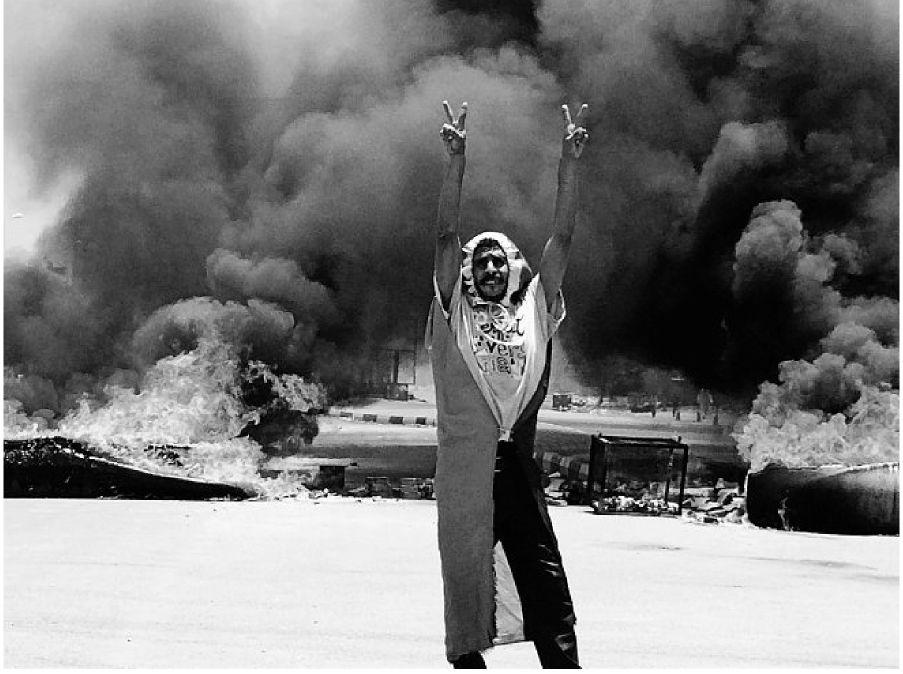 A protester flashes the victory sign near the army headquarters in Khartoum, Sudan, in June. Above, police detain an anti-government demonstrator during a nationwide strike in Bogota, Colombia, Nov. 21. Colombia's main union groups and student activists compiled a long list of economic and other grievances against President Ivan Duque.

A protester flashes the victory sign near the army headquarters in Khartoum, Sudan, in June. Above, police detain an anti-government demonstrator during a nationwide strike in Bogota, Colombia, Nov. 21. Colombia's main union groups and student activists compiled a long list of economic and other grievances against President Ivan Duque.

From Chile to Sudan, Lebanon to Colombia, mounting anger and frustration over rising economic and social inequality, political corruption and disillusionment with democratically elected and authoritarian governments have led to a wide array of mass protests that are not slowing down.

On the surface it might appear they mark a distinctive period in international politics. But analysts say that there have been several such large-scale waves of mass protests in recent decades.

The backdrop to the protests of the 1980s and 1990swas largely the spread of democracy, particularly in Eastern Europe after the fall of the Soviet Union. What's changed is that since the early 2000s, major protests have become more wide ranging, and reaching all corners of the world.

"Governments are not performing worse than they were 30 years ago, but as they grow they create winners and losers," said Thomas Carothers, a democracy expert at the Washington-based Carnegie Endowment for International Peace. "Citizens have higher expectations now ... over the last 10 years we've seen an increasing pattern of large-scale protests."

He added that the power of social media has also helpedmobilize protesters. "I see technology as an accelerator," he said.

A 2013 study analyzing 843 protests in 84 countries across the globe between January 2006 and July 2014 found that the main grievances were economic injustice and a perceived failure of political systems.

Current protest movements are often spearheaded by financially strapped young adults increasingly fed up with their plight, which they believe is the result of corrupt political elites.

Many have been driven by country-specific grievances, often stemming from the fallout of the 2008 worldwide financial crisis, according to Carothers.

"This is a very broad rejection of systems. It's not very ideological," he said, adding that largescale protests have been taking place both in longstanding authoritarian and democratic nations.

Some major one-issue protests have quickly morphed into movements on larger grievances.

In Iran this month, it was an official announcement that gasoline prices would be raised by as much 50% that sparked mass protests, which have since transformed into demonstrations against government corruption.

"There's frustration with the operation of political systems and how they are distributing resources and power," said Robert O'Brien, a political science professor at McMaster University in Ontario, Canada.

Despite the increase in largescale protests, success rates appear to have declined since 2010, according to a 2017 study spearheaded by Erica Chenoweth, a political scientist at Harvard University. "Authoritarian leaders have begun to develop and systematize sophisticated techniques to undermine and thwart nonviolent activists," Chenoweth wrote.

Another reason for a decline in success rates, according to John Chalcraft, a professor of Middle East history and politics at the London School of Economics and Political Science, is that people are embracing a leaderless protest model.

"You see it in Lebanon and to some extent in Hong Kong ... there are limits to what they can achieve because you need leadership in order for protests to engage and transform civil society," he said.

What is driving current protests:

Soon after Iranian President Hassan Rouhani's announcement this month that fuel subsidies would be slashed, resulting in up to 50% hikes in gasoline prices, tens of thousands rallied in cities across Iran. Authorities reacted by firing tear gas and live ammunition into crowds, according to a report by Amnesty International. At least 106 people have been killed since protesters took to the streets Nov. 15, the report found. The actual number could be much higher, but because authorities blocked Internet access for Iranians on Nov. 16, the flow of information stagnated. On Nov. 21, some provinces in Iran reported that the Internet had been restored, the semi-official ISNA news agency said.

Protests began last December over then-President Omar Hassan Ahmed Bashir's decision to trim bread and fuel subsidies. After Bashir was overthrown in an April coup following nearly three decades of rule, mass demonstrations continued, with protesters calling for the military government to hand over power to civilians. In August, protest leaders — largely made up of young doctors and lawyers — reached a power-sharing arrangement due to last for 39 months.

What started as a protest against a tax on WhatsApp calls morphed into 4 million people from all walks of life taking to the streets last month. That led to the ouster of Lebanese Prime Minister Saad Hariri, nearly two weeks after the demonstrations erupted. But tensions remain high with calls for an end to government mismanagement and corruption. The protests have been largely peaceful, although Amnesty International documented incidents of excessive force. One person died when a Lebanese soldier used live ammunition and shot at protesters. The person who was killed was Alaa Abou Fakhr, a 39-year-old father of three.

As in Iran and Lebanon, protests in Chile were triggered by a price hike on an economic staple. In this case, it was a 4-cent spike in subway fares announced Oct. 6. Students led the charge, organizing social media campaigns encouraging people to jump subway turnstiles. The protesters later began demanding improvements in pensions, health care and education. They are now calling for a new constitution to replace the one drafted in 1980 during the dictatorship of Gen. Augusto Pinochet.

Tens of thousands of Colombians discontented with President Ivan Duque and economic inequality took to the streets Nov. 21 amid growing unrest in South America; protests have also rocked Bolivia and Ecuador as well as Chile. In Colombia, according to the World Bank, the top 10% of earners received 39% of the nation's income in 2017.

More than 300 people have died during demonstrations that have gripped Baghdad and Shiite Muslim-dominated provinces since Oct. 1. The protests have been organized on social media by citizens frustrated with government corruption and high unemployment. The protesters also aim to overhaul Iraq's sectarian power-sharing system imposed after the 2003 U.S.-led invasion. Authorities responded with live ammunition and tear gas. But on Friday, Prime Minister Adel Abdul-Mahdi announced that he would submit his resignation to Parliament.