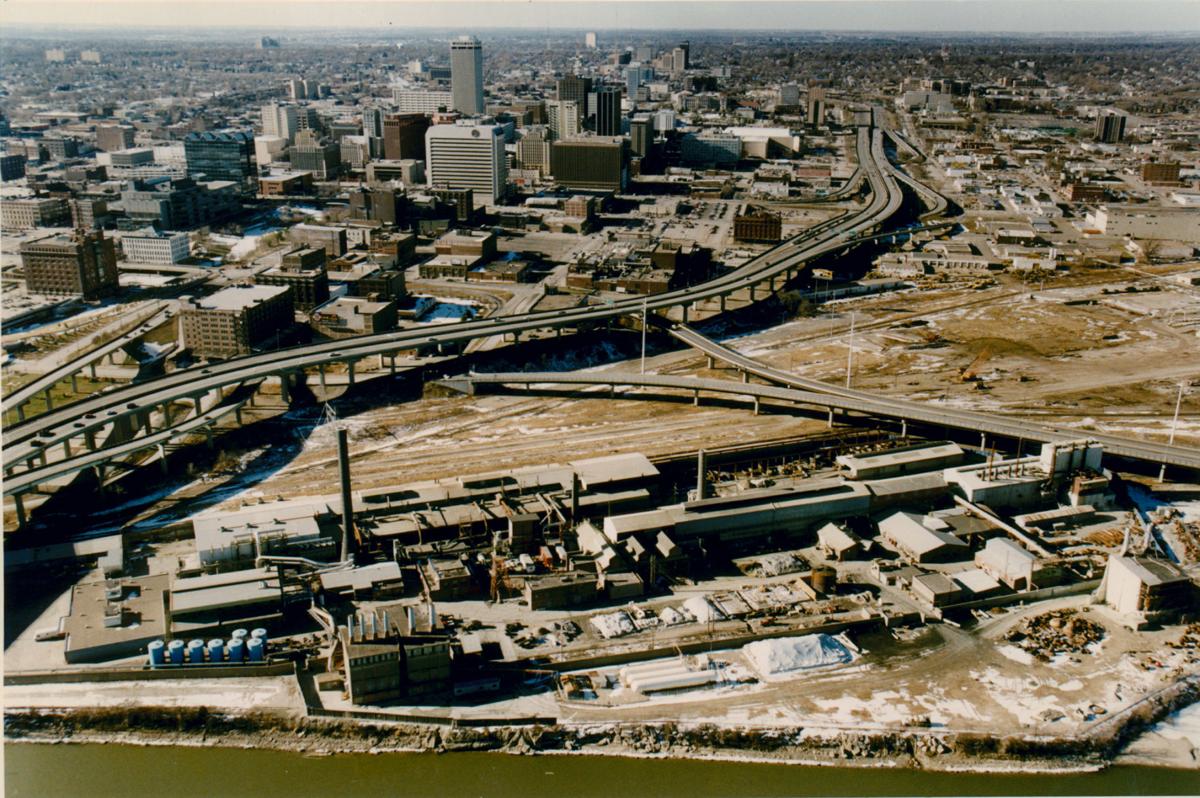 A view of Omaha from the river looking west in 1995. A capped cavern of lead deposited by the former Asarco smelting plant, in the foreground, remains a hurdle in beautifying the riverfront. 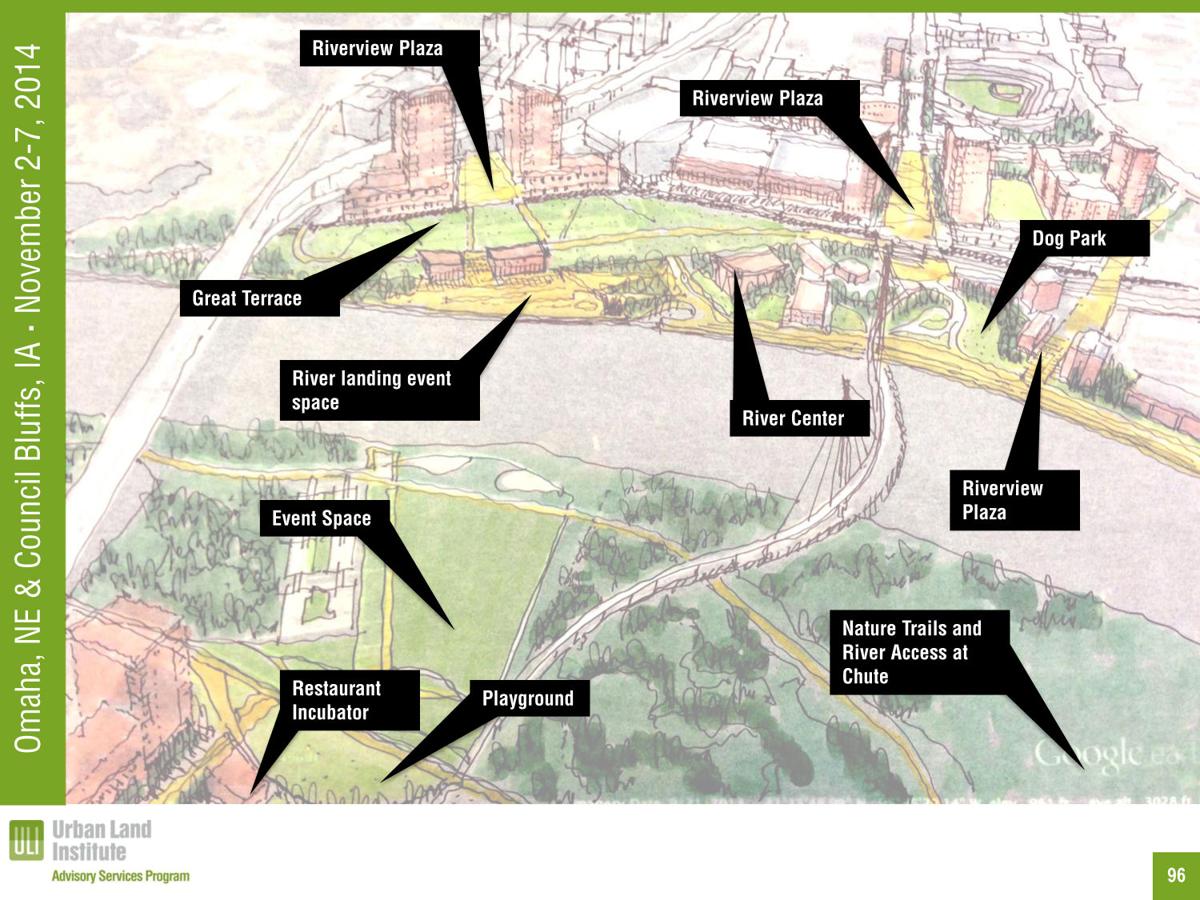 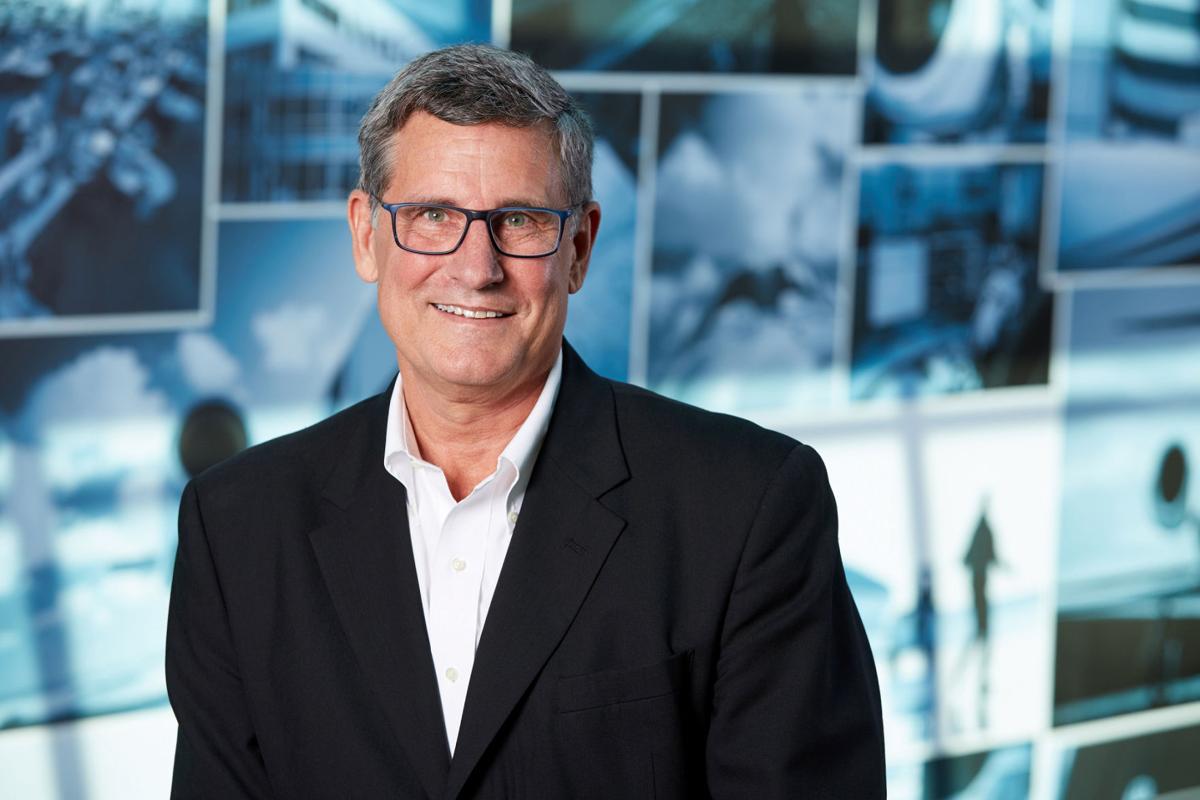 Donn Seidholz, retired Clear Channel and NetJets executive, has spearheaded efforts to develop Omaha’s riverfront on and off for 20 years, ever since he first arrived in town and thought it looked like “a dump.” 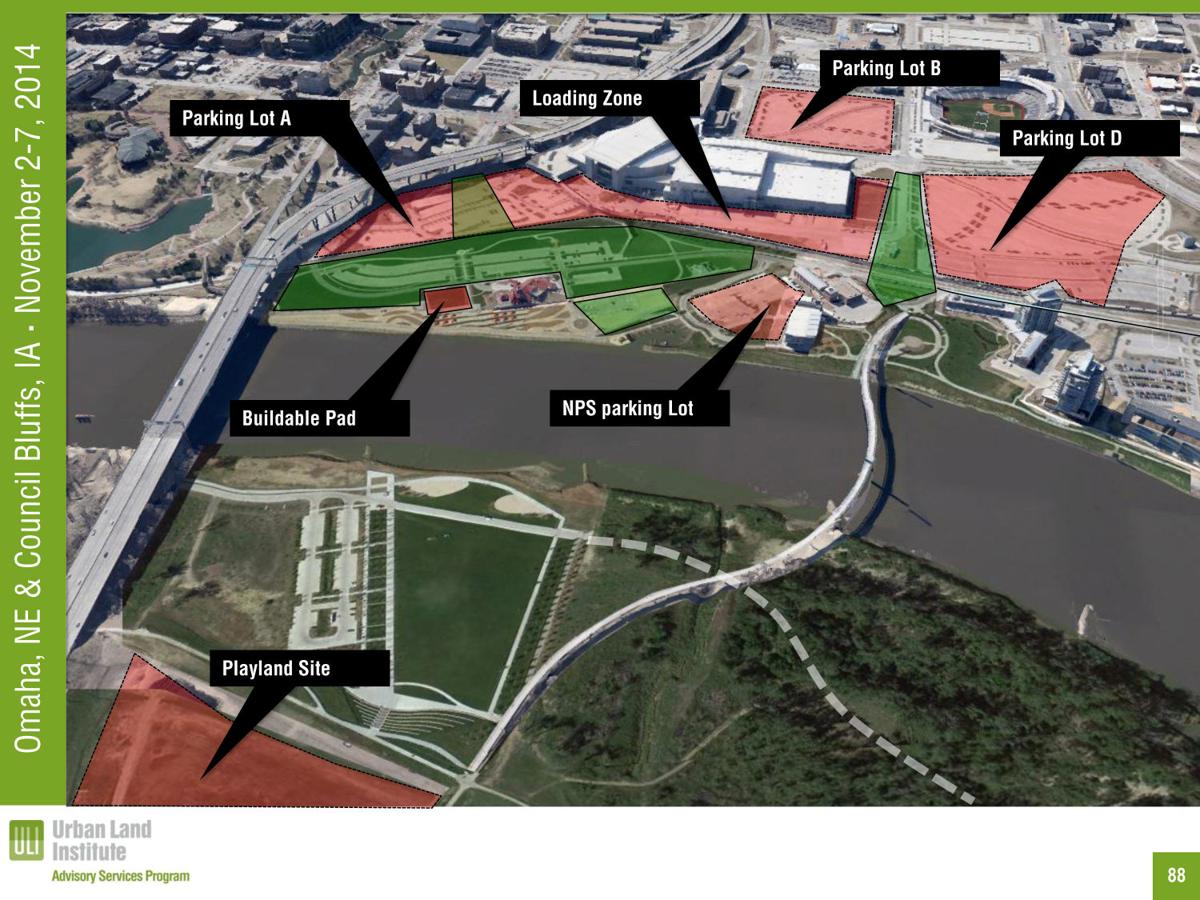 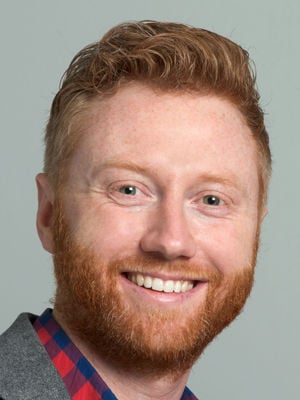 A view of Omaha from the river looking west in 1995. A capped cavern of lead deposited by the former Asarco smelting plant, in the foreground, remains a hurdle in beautifying the riverfront.

Donn Seidholz, retired Clear Channel and NetJets executive, has spearheaded efforts to develop Omaha’s riverfront on and off for 20 years, ever since he first arrived in town and thought it looked like “a dump.”

Donn Seidholz dared me, so I walked to the Old Market, corralled the first out-of-town visitor I could find and forced him to answer a single question.

“Where is the riverfront?” I asked.

“What?” said Mike Nelson, a sales rep in town from Texas.

“Where is the riverfront?” I asked again because I’m a dogged reporter and because I was worried that maybe Mike didn’t hear me.

The Texan looked at me like I had noses where my eyes should be. And then he did something that speaks to the crumminess of Omaha’s riverfront, something that Donn Seidholz desperately wants to change.

Mike shrugged. I dunno, he said.

“Tourists don’t even know we have one,” Seidholz told me this week. “It’s a two-pronged thing: First, how do you even get there? And second, what do you do when you get there?

“We are missing both of those prongs right now ... and that’s what we are going to fix.”

The news that politicians, philanthropists and business leaders in Omaha and Council Bluffs are banding together to beautify and develop the riverfront is exciting news. And so I went to meet the man who has been pushing riverfront development off and on for the past 20 years.

For a long time, this seemed a bit of a quixotic quest for Seidholz, a now-retired Clear Channel and NetJets executive who has devoted much time and energy to a project that seemed forever stuck in Missouri River mud. But now? Now it seems like it might actually happen.

The devil, of course, is in the details, and the details will be affected by railroad tracks, the river’s propensity to flood and especially an underground cavern of contaminated lead that might prevent much new construction on the Omaha side of the river. That last, horrifying detail is courtesy of the longtime Asarco lead-smelting plant, the gift that just keeps on smelting.

But honestly, there is plenty of time to worry about the cost, who will pay, all the barriers. Right now, it’s time to dream about the possibilities. It’s time to build on momentum created by the popular Bob Kerrey Pedestrian Bridge.

It’s high time, Seidholz and many others think, to look at Omaha’s riverfront, consider what’s wrong with it and then ask: How can we make it right?

“Water brings people together,” he told me. “We can use our water, our natural beauty, in a way that brings us together.”

If we’re going to do that, he thinks, we need to start with the fact that Mike from Texas hasn’t the foggiest about where our riverfront is.

It’s hard and confusing to get down to the riverfront, especially for visitors not used to navigating the mish-mash of roads, sidewalks and walkways that look like something an overly creative 6-year-old built with a Brio train set.

A recent Urban Land Institute study suggested a bevy of ways to physically connect the city and the riverfront: Extending Capitol Avenue down closer to the water. Building that “Baby Bob” pedestrian bridge that directly connects the riverfront and north downtown. Putting up a coherent set of signs that say, essentially, “Hey, Mike, we have a real body of water down here!”

Once we make the riverfront accessible, then we can make it pretty. What about a major park to cover what is now a failed restaurant’s parking lot and a shocking amount of simply unused land? What about if this park included a dog park and biking trails? And what about if this park had a defining central element, something like Millennium Park’s striking Crown Fountain in Chicago, where thousands of kids and adults alike congregate on sunny summer days?

“Ideally, if I had a magic wand, we would do something there that doesn’t exist anywhere,” Seidholz says. “Something that over time becomes a symbol of what Omaha is.”

And then, if we make it pretty, can we also make the riverfront a place where more of us live, work, shop and dine?

This last one is problematic on the Omaha riverfront side, particularly near the water where Asarco “capped” an area filled with contaminated lead. That makes it difficult to build much more than a park or potentially a small building or two on the capped land on the riverfront between the pedestrian bridge and Interstate 480.

However, Seidholz, Greater Omaha Chamber President David Brown and the Urban Land Institute study identify several areas where we could build residential, commercial or retail space: On the Council Bluffs side, where it is actually already happening. Back from the water a bit from the Omaha side, on a piece of land just south of the CenturyLink Center, which currently features an oft-unused surface parking lot and an awkward pedestrian bridge. And maybe most tantalizingly, on the site of the ConAgra campus, if and when that company unloads its riverfront property.

“Now that ConAgra is trying to figure out what to do with that property, we should be asking the same questions about that property as we are the riverfront,” Brown said.

I asked if the riverfront and any ConAgra campus redevelopment could happen together in a comprehensive manner.

Seidholz pointed out that the ConAgra campus area and Heartland of America Park could be linked to Little Italy and even Lauritzen Gardens by a pedestrian bridge and walking/biking trails to the south.

“The main point is this: There’s huge potential up and down the riverfront.”

Seidholz’s desire to see the riverfront reach its potential has its roots in the first time he set eyes on Omaha.

He arrived here 20 years ago, a new promotion stuffed in his suitcase, a new life in an unfamiliar city about to begin.

Then he landed at Eppley Airfield. It was February. The wind howled.

He took a cab down Abbott Drive near Omaha’s riverfront. He saw a junkyard. He saw a scrap metal yard. He saw what looked like an industrial wasteland.

Donn Seidholz reached his hotel and called his boss. This doesn’t feel like a promotion, he said. This feels like a demotion.

“The riverfront was awful,” he says. “It was a dump. That was the beginning of me wanting to do something” to change it.

He has met with mayors as far back as Hal Daub and spearheaded working groups to think about the riverfront. He raised money to bring in the Urban Land Institute, persuading a cross-section of the metro area’s movers and shakers to fund a 36-page report that now looks very much like a template for what we can and should do on the Missouri River.

Omaha Mayor Jean Stothert and Council Bluffs Mayor Matt Walsh are enthusiastic supporters. So are both cities’ chambers of commerce and now Heritage Services, the area’s most powerful philanthropy group.

The public can weigh in on what they want to see on the riverfront at reimaginetheriverfront.com.

Brown said the chamber hopes to hire an employee by August whose full-time focus will be the riverfront.

“These spaces don’t just activate themselves,” Brown said, mentioning Aksarben Village and Midtown Crossing as two examples of successful redevelopment. “Money, time, energy, people ... we need to do something similar now on the riverfront if we’re going to see a similar level of activity.”

Together, Donn Seidholz thinks, we can borrow from dozens of other cities that have recreated their riverfronts — big cities like Louisville and smaller places like Peoria and Dubuque.

We can make Mike from Texas realize where the riverfront is and make it a reason he likes coming to Omaha. We can take what has long been a negative in our city and turn it into a positive.

Yes, Donn Seidholz. Yes it most definitely is.

Fred Piccolo isn't trying to be hip. He has just been barbering so long that going to a barber went out of style and then came back into vogue.

Hansen: Mosque elder who sought to show people's similarities was a Vietnam veteran and Muslim convert buried as both

On one side of a freshly dug grave stood veterans of the U.S. military, shoulders back and arms raised, firing a traditional three-volley salute. On the other side stood more than 100 Muslim-Americans, whose grandparents or parents — or themselves — came to Omaha from points across the globe.

Hansen: ‘Livestock are the teachers’ on farm that connects country life, troubled teens and a steer named Swag

Omaha and Council Bluffs leaders are talking with the powerful nonprofit Heritage Services about ways to draw more people and development to the area.

Rethinking the riverfront: New committee is charged with implementing a vision for development

A new committee backed by the Greater Omaha Chamber of Commerce has formed to do the nitty-gritty work of implementing a bold vision for the riverfront area in Omaha and Council Bluffs.