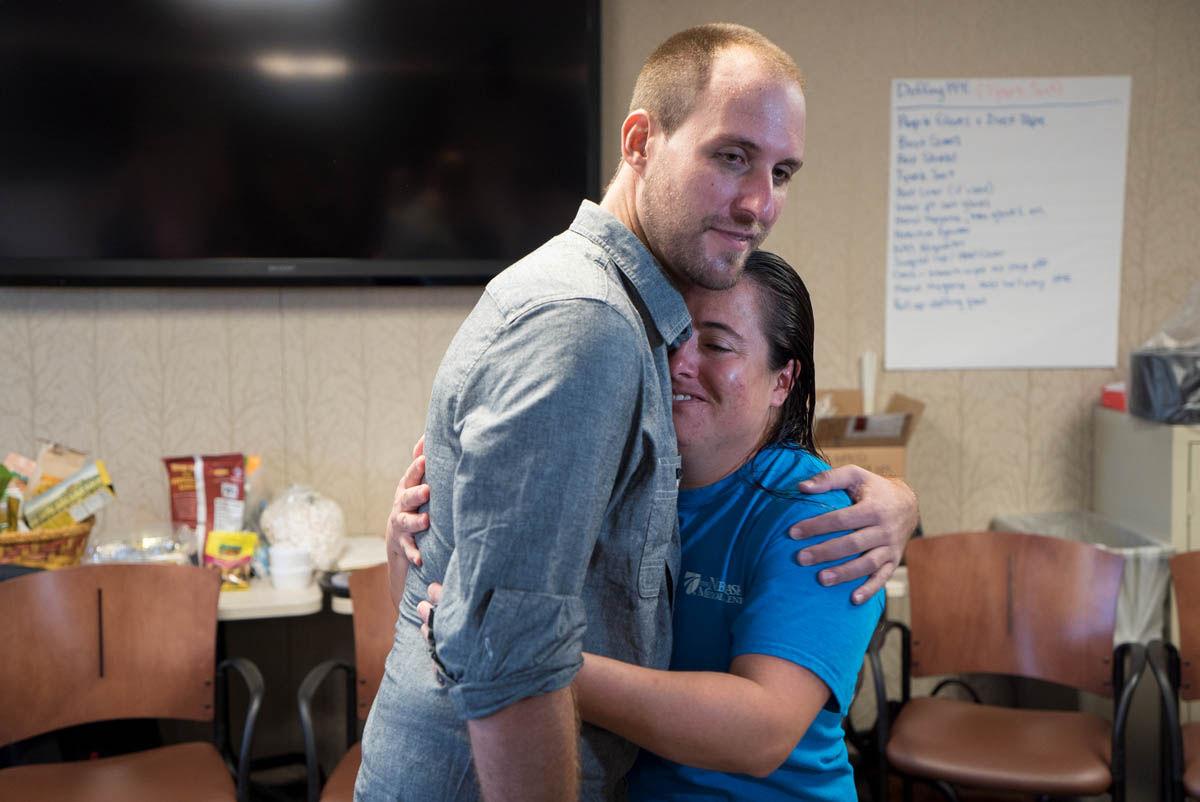 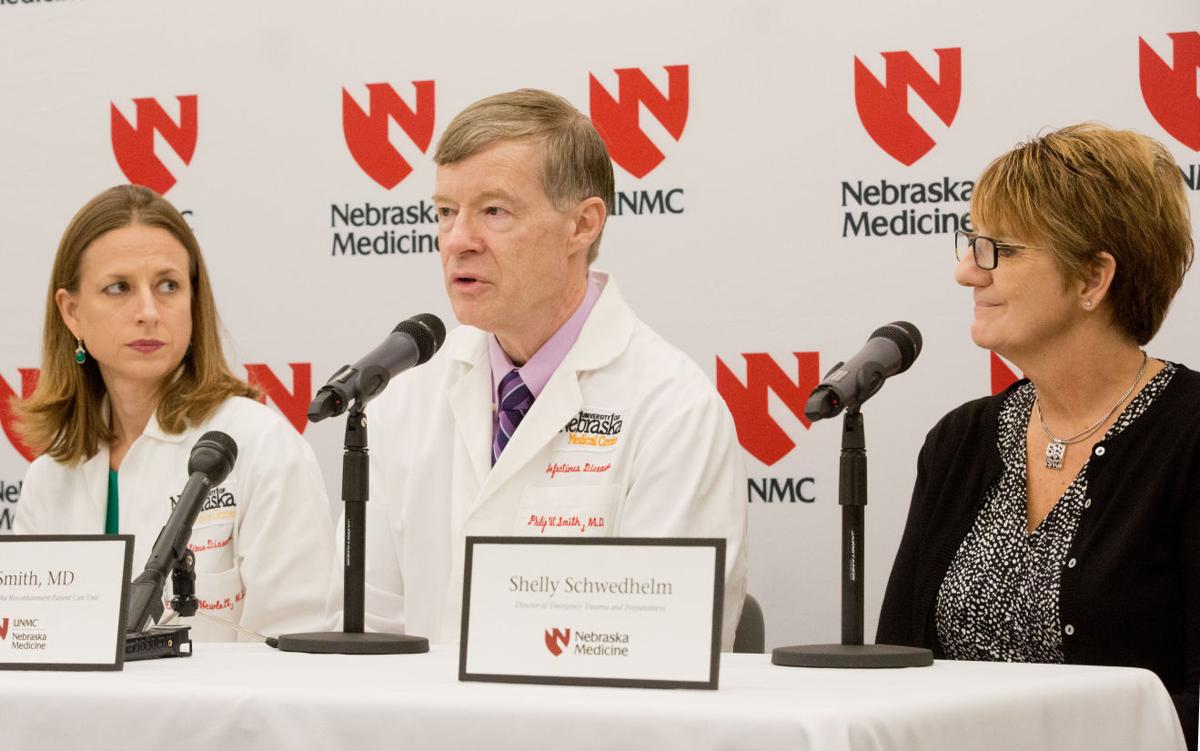 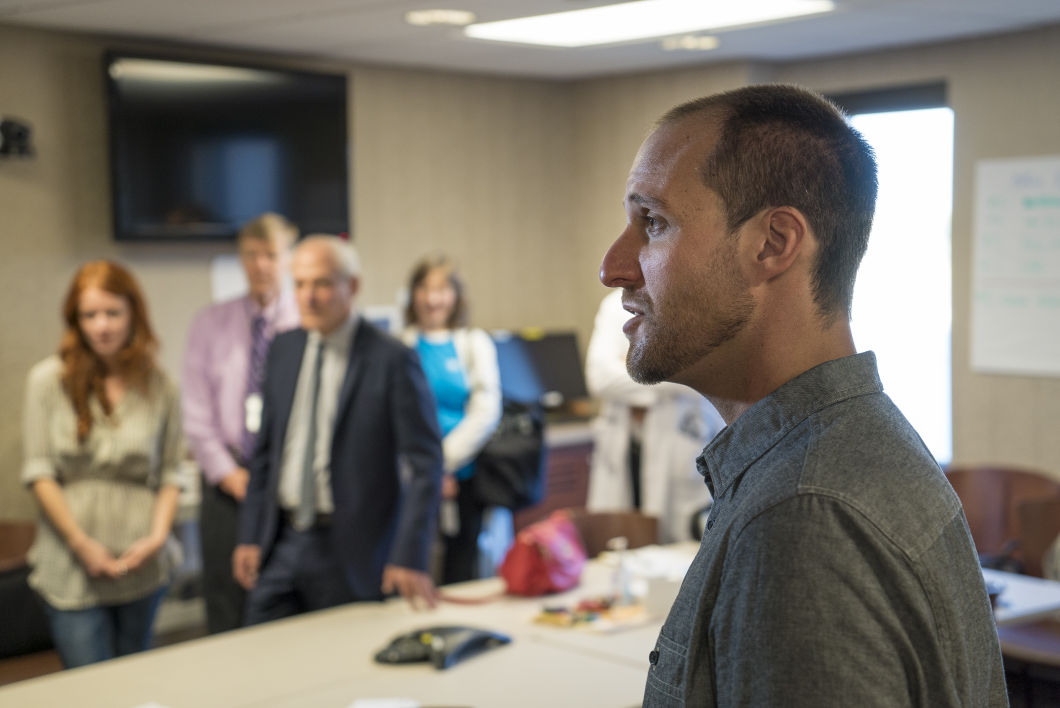 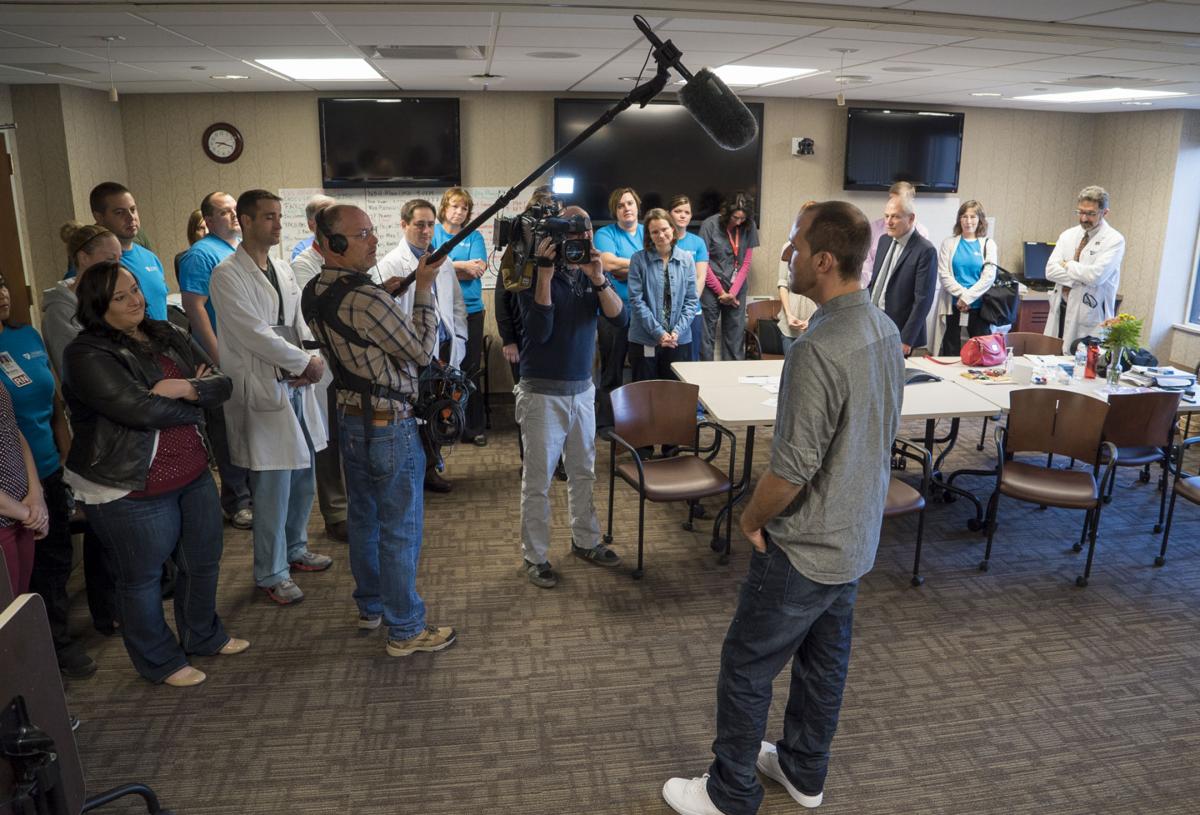 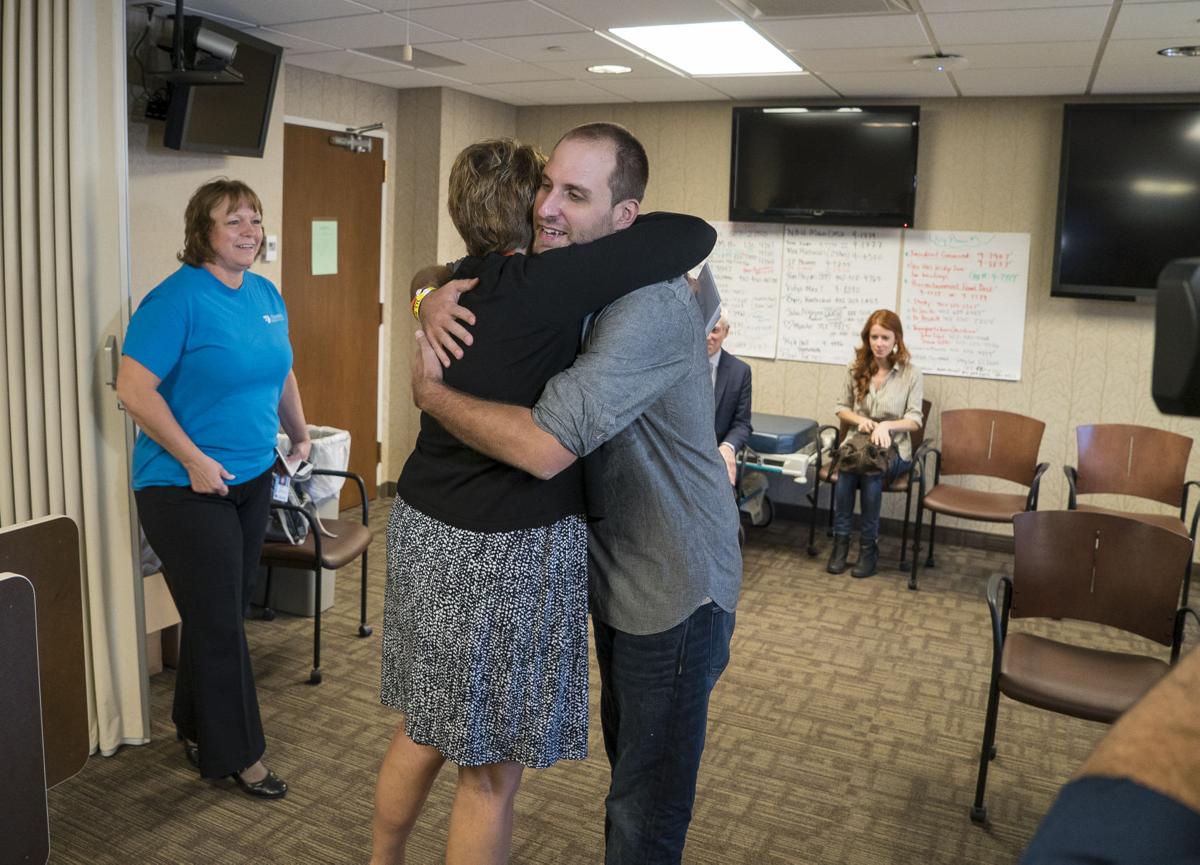 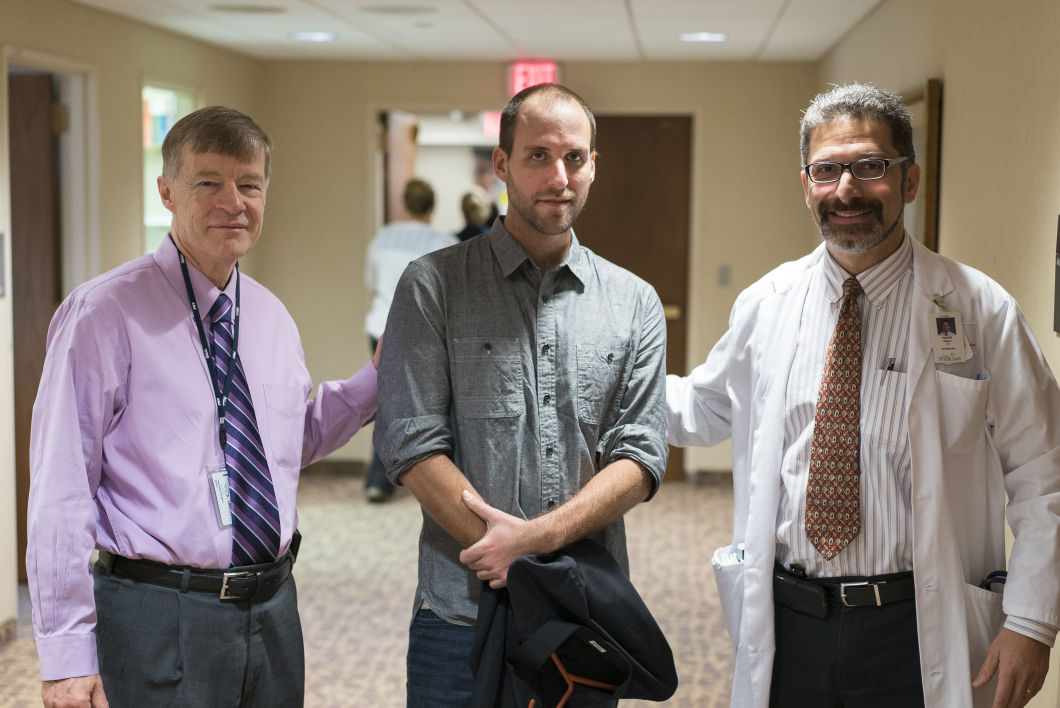 Ashoka Mukpo was released from the Nebraska Medical Center's biocontainment unit on Oct. 22. He show here with his father, Dr. Mitchell Levy, and girlfriend, Helen Finlay.

Ashoka Mukpo, the second Ebola patient to be treated and found virus-free by the Nebraska Medical Center, quietly left the biocontainment unit Wednesday, issuing a statement full of thanks for his care but with a heavy heart over receiving treatment that is denied many in West Africa.

“Today is a joyful day for my family and I. After enduring weeks where it was unclear whether I would survive, I’m walking out of the hospital on my own power, free from Ebola,” Mukpo wrote. “This blessing is in no small measure a result of the world class care I received at the Nebraska Medical Center.”

At the same time, Mukpo said, “I feel profoundly blessed to be alive, and in the same breath aware of the global inequalities that allowed me to be flown to an American hospital when so many Liberians die alone with minimal care.

“This circumstance weighs on my heart. ... I know firsthand that this disease is treatable and hope that some approximation of the care I received can be given to sick Africans. My prayers are with the Liberian, Sierra Leonean and Guinean people."

Doctors treating Mukpo, a 33-year-old freelance journalist, said at a Wednesday press conference that it was gratifying when any critically ill patient is treated and gets better. That's especially so, they said, when the care involves a dangerous, highly contagious disease while protecting the staff.

Some 60 people provided front-line care for Mukpo, with many others behind the scenes, said Dr. Phil Smith, the biocontainment unit’s medical director.

Mukpo praised his caregivers, saying upon arriving he was instantly reassured that he was in good hands, with a calm, well-prepared nursing staff and the professional manner of Smith.

“Their Midwestern friendliness was a welcome presence in a dark time, and I was grateful for their efforts to connect with me on a personal level,” Mukpo wrote. “On the bright side of my bout with Ebola, I was introduced by the nurses to something called a ‘Runza.’ ... This is a truly impressive team, and it’s no wonder I beat Ebola with them watching my back. I owe this staff a debt I can’t ever repay.

For this case, the med center had critical care physicians in charge of managing the supportive care — the IV fluids and nutrition, and the electrolyte monitoring and replacement — that Mukpo received.

“Treating that very aggressively really helps patients survive,” Dr. Craig Piquette, director for the pulmonary critical care program, said in an interview Wednesday. “We were getting lab work, monitoring symptoms day to day and addressing issues as they came up.

Mukpo was given IV nutrition — high amounts of glucose, appropriate amino acids and some essential fatty acids — from his first day in the unit, Piquette said.

Mukpo also received plasma from an Ebola survivor and an investigational anti-viral drug.

Treating the first Ebola patient, Dr. Rick Sacra, showed the Nebraska Medical Center treatment team the importance of speedy access to lab results, so a lab was set up inside the biocontainment unit. That saved about an hour between drawing the blood and getting the lab results back.

Having the lab in the unit was “incredibly helpful,” Piquette said. “Because the electrolytes can change every six hours. You need to get lab results fairly frequently.”

Piquette traded off with Drs. Jim Sullivan and Kristina Bailey, who also are critical care physicians. Piquette admitted Mukpo and took care of him the first week, Bailey had the second week and Sullivan had the last week and discharged Mukpo.

“We’re greatly gratified that the patient did well,” Piquette said.

Mukpo also thanked Dr. Kent Brantly, the Ebola survivor who donated the plasma, and NBC News, who he said supported him throughout his illness. Mukpo had worked for NBC for one day when he became ill. The network has said it is working to ensure Mukpo does not incur any costs for his medical care.

Smith said he is confident the cost is covered and, in response to a question, noted that no taxpayer dollars were involved.

Mukpo said in coming weeks he plans to do interviews and write about his experiences, but at this point is choosing to do only one interview — with NBC — “and save my energy for my family ... whose unwavering support sustained me both physically and spiritually in this ordeal.”

In the meantime, he asked for “space and privacy.”

Mukpo and his family were expected to fly out of Omaha later Wednesay.

Mukpo was flown from Liberia to Omaha on Oct. 6. The first Ebola patient treated in Omaha, 52-year-old Sacra, also contracted the virus in Liberia and was treated in the biocontainment unit from Sept. 5 through Sept. 25.

“Everybody’s a little different,” Rupp said in a Tuesday interview. “The treatments were different for these patients. There may have been a bit of difference between the onset of symptoms and when transfer (to the U.S.) was arranged. I think Dr. Sacra was sicker for longer before he got here.”

Smith said it could have been because of Mukpo is younger, or because of a lesser amount of the virus in his blood. He also used an exercise bike and bands in his room in recent days. “He was very active,” said Dr. Angela Hewlett, the unit’s associate medical director said Wednesday.

Prompt supportive care, including IV fluids and electrolyte replacement, has proven to be important in Ebola cases, Rupp said.

He noted that Thomas Eric Duncan, who showed up in Dallas after being exposed in Liberia, didn’t start receiving supportive care until late in the course of his illness, and he died. Sacra and Mukpo, on the other hand, began getting treatment early in their illness.

“All the other patients in the U.S. who have gotten diagnosed more quickly — have been into ICU settings with aggressive supportive care and been (given) some of the investigational agents — have survived,” Rupp said.

Mukpo had been posting on Twitter sporadically from his quarantined hospital room. He tweeted several statements Monday night.

“I got so much support from so many people these last few weeks,” he said in another. “Endless debt, endless gratitude.”

He also said he has no idea how he contracted the virus. “It was something fluky,” he said. “My best guess is I touched a surface and didn’t chlorinate fast enough.” (Chlorine bleach kills the virus.)

Mukpo had been working in Liberia for various media outlets. He was hired Sept. 30 as a second cameraman for an NBC News team. He previously worked for two years for a nongovernmental organization in Liberia, returning to his family’s Rhode Island home in May. He went back to Liberia in early September.

“The world is a beautiful and tragic place,” he said in his Wednesday statement. “I saw both sides in the last few weeks. Every breath I take is an opportunity to give thanks and appreciate the blessing of life. I will never forget how fortunate I am.”

Read the statement from the second Ebola patient treated at the hospital.

Nebraska Med Center nursing official: Unit could care for no more than 2 or 3 Ebola patients at same time

Shelly Schwedhelm said the med center’s 10-bed unit is “prepared to take on more than one patient.” But Schwedhelm said the autoclave equipment — the technology that sterilizes items with high-pressure steam — would limit the unit’s capacity to two or three Ebola patients at once.

An Ebola scare aboard their cruise ship already had disrupted the vacation of an Omaha family. Then, after they got home, an adult daughter found out via email that because she had been aboard the ship, determined to be Ebola-free, she wouldn’t be starting a job she'd secured before the cruise.

Eleven years ago, I was on the original steering committee for the Nebraska Biocontainment P…

U.S. to track everyone coming from Ebola nations

Stepping up their vigilance against Ebola, federal authorities said Wednesday that everyone traveling into the U.S. from Ebola-stricken nations will be monitored for symptoms for 21 days. That includes returning American aid workers, federal health employees and journalists, as well as West African travelers.

Ashoka Mukpo, the second American Ebola patient to be sent to the unit, left the hospital Wednesday after a little more than 16 days of treatment. Mukpo issued a statement full of thanks for the care he was given but with a heavy heart over receiving something that is denied many in West Africa.